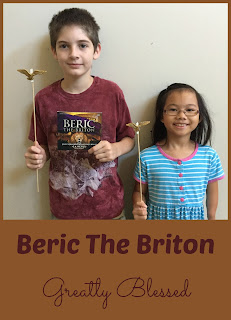 We recently made a road trip to Nevada to visit family.  When the in-the-car-too-long whining started, I pulled out a surprise review item:  Beric The Briton, another fantastic audio drama from Heirloom Audio Productions!

As we settled in to listen, our minds dropped back in time, and we were soon submerged in the story.  I was impressed by Beric's integrity.  Not only did he not try to escape during a shipwreck, he actually rescued his captor and his captor's son!

Although Beric was a Briton, he had lived among the Romans, and understood their ways.  He had a thirst for knowledge and he transformed the way the Britons fought by imitating the Roman military style.

One of the things in the story that inspired us to further learning was the mention of the Roman golden eagles.  I immediately thought of a movie series I've watched on Netflix where a golden eagle was captured, and we set out to find out why those golden eagles were such a big deal.

You may have noticed an eagle atop a flag pole at some point, and eagles are an American symbol.  But we stole the idea from the Romans.  In addition to being a symbol of power, it was thought that the eagle would carry the soul into the presence of the gods (particularly Zeus).  During battles, the Romans carried the eagle atop a pole, and when the eagle fell, the legion was disbanded.  There were times when an eagle would be removed from the pole and hidden, to protect it from capture. 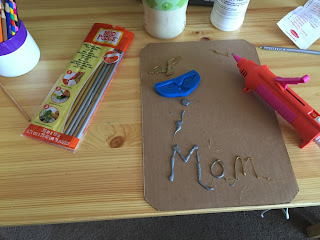 Beric captured a golden eagle, which was a loss of face for the Romans.  To help cement the idea in my kids minds, we made golden eagles.  I used gold Mod Podge Melts and a silicone eagle mold.  (First I had to get the silver out of the glue gun.) 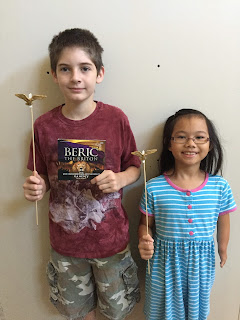 Voila!  The finished eagles!  Jack was a little more excited when I told him we could make edible golden eagle snacks by pouring yellow chocolate melts in the mold.

Heirloom Audio does a fabulous job with their dramatizations of the books written by G. A. Henty.  We have the entire collection, and I'm looking forward to hearing the next one when it comes out.  We received not only the physical 2 CD set, but also some online bonuses!  The kids especially enjoyed watching the behind the scenes videos showing how the audio drama is made.  There are also a couple of beautiful, printable posters; a study guide with discussion questions, vocabulary, and more; the soundtrack; and an especially nice feature, an ebook version of the story.  This would be great for a more visual person to be able to read along with the CDs and still get the benefit of all the special effects and music.

If you have yet to try any of Heirloom Audio's fantastic recordings of the G. A. Henty books, you're missing out!  Our family has really enjoyed them.  They are a great way to bring history to life, and give kids wonderful heroes to look up to.

You can connect with Heirloom Audio Productions on Facebook, Twitter, and G+.  There's also a specific Facebook page just for Beric The Briton.  To learn how other Crew families used this 2 CD audio dramatization, please click the box below: