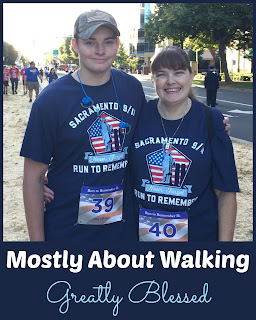 So, in June, I posted a little update on myself, and talked a bit about how I started walking for exercise.  I'd even done my very first 5K. 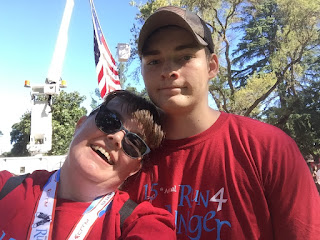 This was after my second 5K, which went much better! 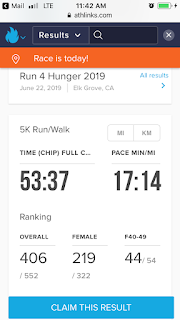 I was pretty proud of myself for 1) not dying; 2) finishing in under an hour.  It helped that it was a morning race, so it wasn't melty hot yet. 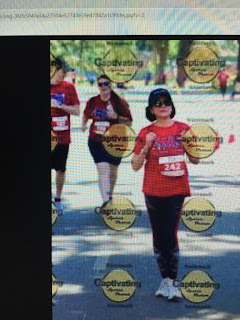 The disappointing part was that this was the only picture of us during the race.  We're just background fodder to 242.  But we did it! 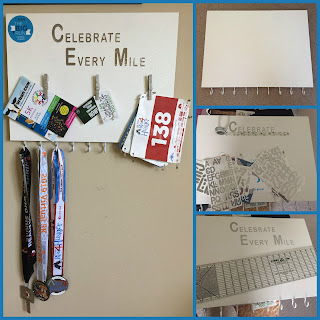 The Yes.Fit virtual race Facebook group has been super encouraging, and after seeing other people's medal racks, I decided to make my own display/motivation board.

More than 4 years ago, I won a prize box from Mod Podge Rocks blog.  One of the things in the giant box of crafty goodness was a big, blank board.  I finally found the project for that board.  First I painted it white, then I added a layer of clear sparkles, because glitter.  Then I drilled guide holes in the bottom and screwed in big old cup hooks.  I looked at a lot of medal racks on Pinterest to find just the right quote for it, which I added in sticker letters (using easy to remove washi tape to keep them in a straight line).  I painted 3 clothespins silver to go with the lettering, and glued those onto the board.

I like it.  I figure I have plenty of room to add another row of hooks to the front of the board, high enough up so that I can add another row of medals and have both be visible, should I stick with this long enough to earn that many.  I do think I should have put the letters on before the clear sparkle layer, because the stickers tend to want to peel back a bit, and if I'd done the sparkles afterward, it would have acted like a seal over the stickers.  I could clear Mod Podge over it, if it really bothered me.  I might put all the race bibs on a ring and hook the ring onto one of the hooks.  They're slippery, so when I get a bunch of them, they are not going to want to stay in the clothespin. 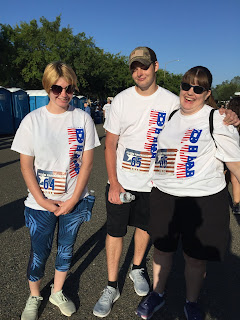 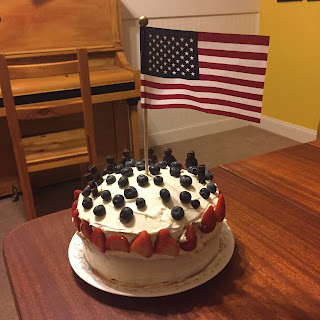 Which we celebrated with this lovely patriotic cake made by Josiah. 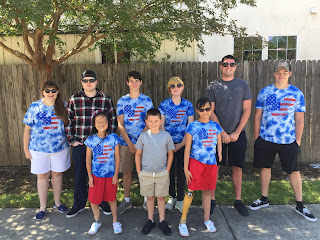 And a most-of-the-family picture while Zach was around. 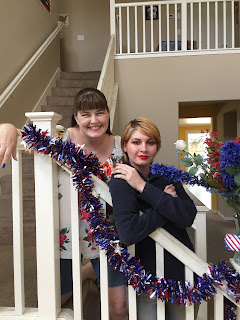 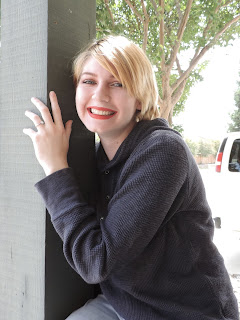 While the Army didn't work out for her, and things ended with Boy, she's built a new life, and there's a new man in that life.  She's happy, and I'm happy for her. 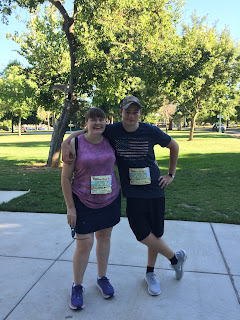 This was our 4th 5K, another evening event (HOT), but with a twist.  You walk/run a mile and a half, they give you a scoop of ice cream, and then you walk/run back.  I was seriously dragging because I'd worked hard at my exercise class the day before, and my arms were SO sore that every step hurt.  Eli absolutely has the gift of encouragement, though, and he talked me through it. 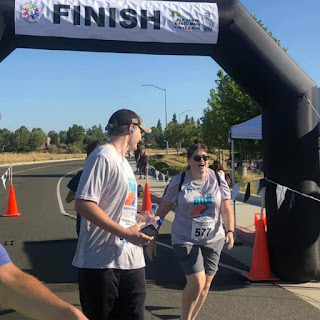 5K #5 was in support of kids in foster care, a cause dear to my heart. 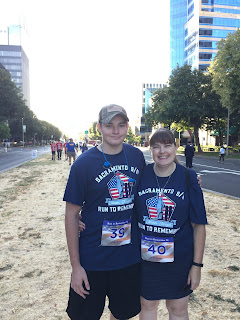 Our 6th 5K event was the Run To Remember honoring those lost in the 9-11 attacks. 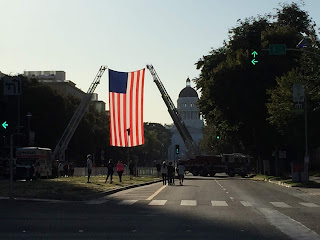 The walk was great.  I even shaved 2 minutes off my time. 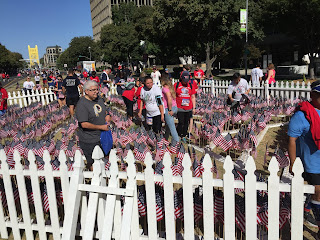 After the walk, we were invited to place flags by the names of the victims.

So, after 6 walks, I've decided I like them.  And I'm signed up for 3 or 4 more from now to November.  I seem to have started a little collection of race shirts, so I'm thinking I might eventually hack them up and make a t-shirt quilt commemorating this phase.  Speaking of making, I did some sewing recently.  I'll have to share that another day.