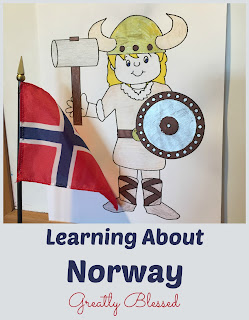 Last weekend, when I was lesson planning, I fell down a rabbit hole, and now I am looking forward to a "day trip" to Romania.  One of the books we use, Window On The World (affiliate link), talks about various people groups.  Our reading in that book for this week was supposed to be about Romania.  Hmm, Romania, Transylvania, Dracula...  So I ordered up some books, and when they get here, we'll be doing some reading and a little vampire craft.  And a couple worksheets.  Because when I Ms. Frizzle, I tend to go a little overboard. 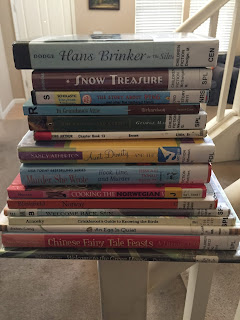 A pile of not-Romania books.  Starting to see some Norway books come through now.  It's hit & miss what we'll get quickly, and what will take literally months to arrive.  I went way overboard getting black history books in February, and... 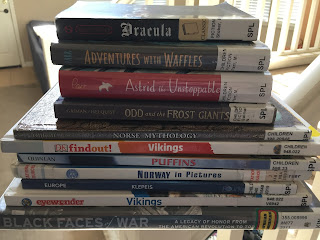 ...they're still trickling in, 8 months later.  Which reminds me.  I need to return that book about the Port Chicago 50. 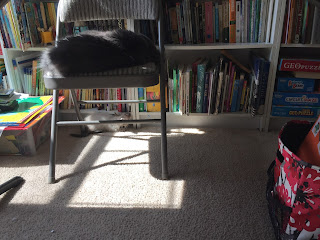 So, terrible lighting, but what you see here is Grumman on the chair, and Bertie on the floor.  This was the closest they ever got.  I had hoped that Grumman would get used to the kittens, like he did the ones we had earlier this summer, and we could keep pretty Bertie.  This was not to be. 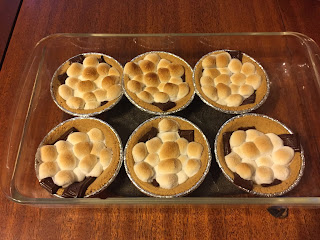 A dessert I saw online.  S'mores cups.  Chocolate and marshmallows in little pie crusts.  They were pretty messy.  It's a cute idea, but I won't be doing this one again. 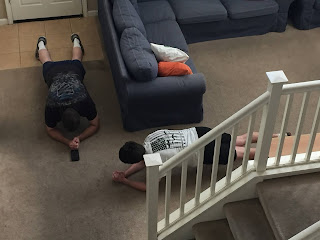 Jack and Paul have been working out together.  They were planking the other day, and I kinda laughed at Jack's noises.  "Well you try doing it, then!"  Only, I knew that I can plank.  So I had Paul time me, and I did the same time they did, without the I'm-going-to-die noises. 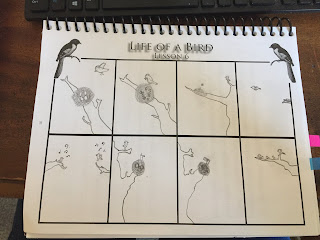 It's funny the things that are "hard" for my students.  Sometimes, something that I assume will be fun ends up causing tears.  Such was the case with this cartoon strip.  Someone who has no problem following step by step drawing instructions, completely freaked over coming up with their own plot and sequence. 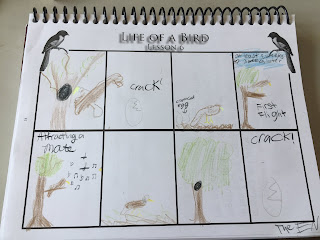 Even though we don't do every single project, I appreciate the variety of learning experiences offered in these notebooks.  Lots of stuff I wouldn't have thought of on my own, like cartooning. 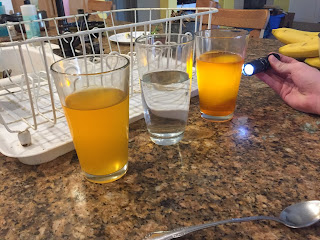 Jack had a science experiment involving plain water, colored water, and Jello.  Something about light particles.  I asked him to let me take a picture, because I hardly get to mention him here any more. 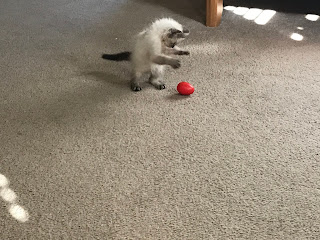 Toy egg shaker.  Best. Kitten. Toy. Ever.  I was sitting in the sewing room when I heard "rattle, rattle."  I looked over, and Bertie had found the egg shaker, and was rolling it around.  He played with that thing for a good 10 minutes straight.  I even got video, in which he does a somersault. 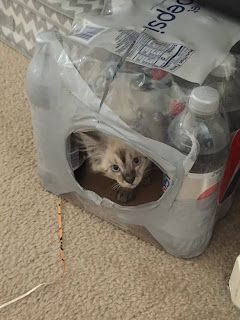 But baby Bertie reached two pounds, and headed back to the shelter for surgery and adoption.  I'm a little sad, since I hoped he would stay, but I've been working on putting away/packing up all the supplies, and cleaning/washing everything they contacted.  Grumman still hasn't really forgiven me, even though I've tried to make the kitten smells go away. 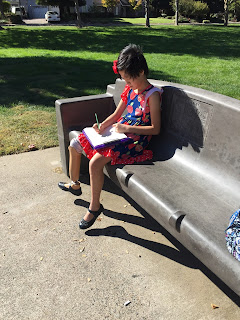 I mentioned the attempted School Pictures.  We spent some time drawing at the park, too. 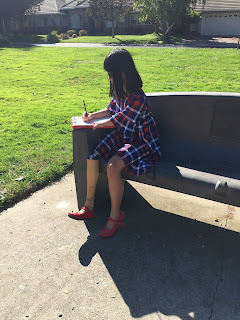 Nice to get out in the fresh air.  I'm hoping to manage the pumpkin patch next week, but I keep making excuses. 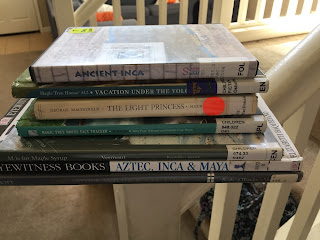 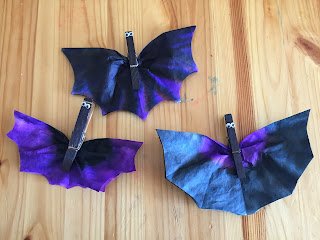 The most fortuitous thing happened!  We hit bats in our Flying Creatures science in October.  Because October is the time when all the bat crafts, bat worksheets, and bat drawing instructions are floating around.  So we made these cute, simple coffee filter bats the first day of the bat chapter.  And I reserved some bat books.  And I downloaded some bat puzzles and such. 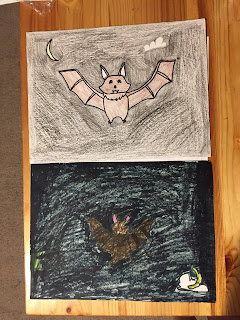 And we did bat guided drawings.  Because I tend to take an idea and run with it. 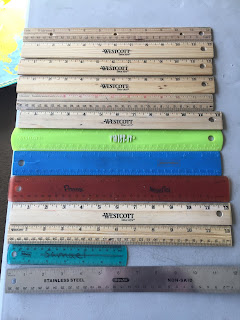 The center drawer of my desk is a mish mash of staples, binder clips, paper clips, paper fasteners, pushpins, and assorted nonsense.  I was looking for suction cups to hang up our bats and I found rulers.  Lots of rulers.  13 rulers in one drawer.  This does not include the rulers that Hannah and Katie have in their school buckets.  The boys used to sword fight with them when they were little.  And I'm pretty sure the big kids used to hide rulers from me, because (pre-adoption) I may have utilized corporal punishment from time to time.  I'm guessing the Westcott rulers were a 5 cent loss leader in the school daze sales at Staples.  But still.  That's a lot of rulers.  I kept one in the drawer and put the rest in our school supplies bucket.  I'll donate the best of them to the next backpack drive I run across (along with several crayon boxes that I'm not sure why we have). 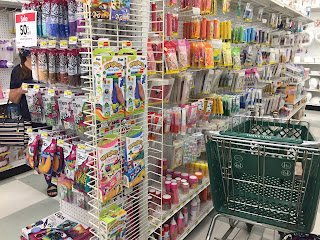 I went into JoAnn's to get some faux fur for a gnome craft, and I found it amusing and slightly dangerous that the Perler beads and the baking sprinkles were right next to each other. 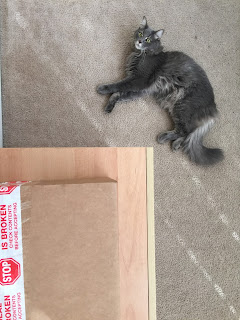 Eli had a box shipped here.  When he asked for a picture, Grumman photo bombed. 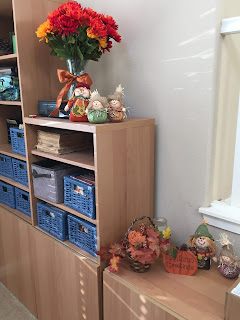 Autumn is in the air.  It's in the front room, too!  Time to dig out the hoodies just in case we leave the house in the morning. 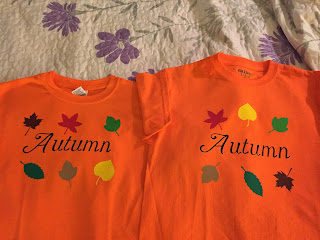 I used Crikey to make the girls autumn t-shirts.  While I was at JoAnn's getting fake fur, I noticed the 5 for $10 t-shirt sale, so I picked up a few blank t-shirts for crafting.
There you have it.  We have one more week in Norway, then we'll be heading to France.  This coming week should include Romania, and possibly time travel (Vikings).
at October 17, 2020