Weekly Wrap Up #26 with Park pictures 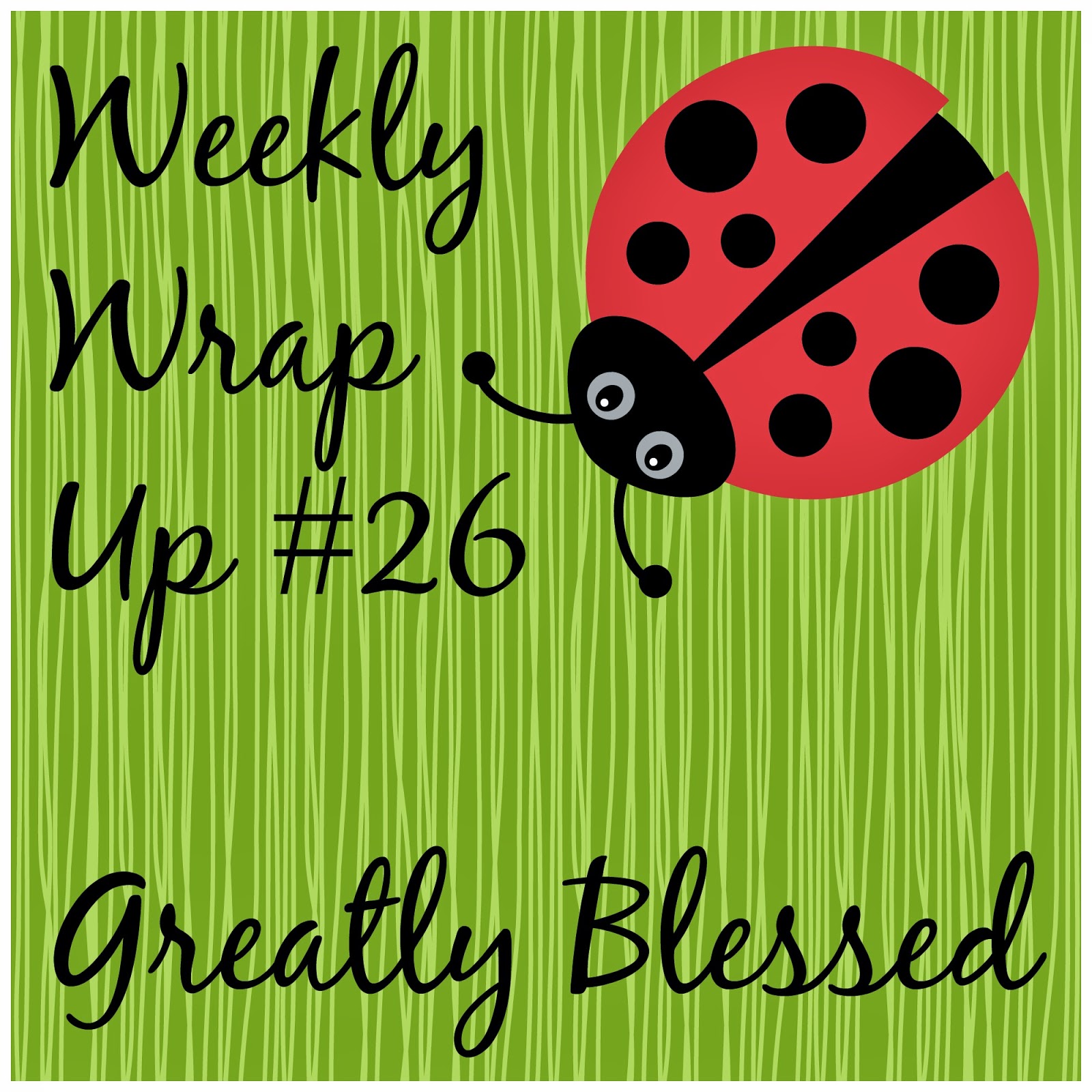 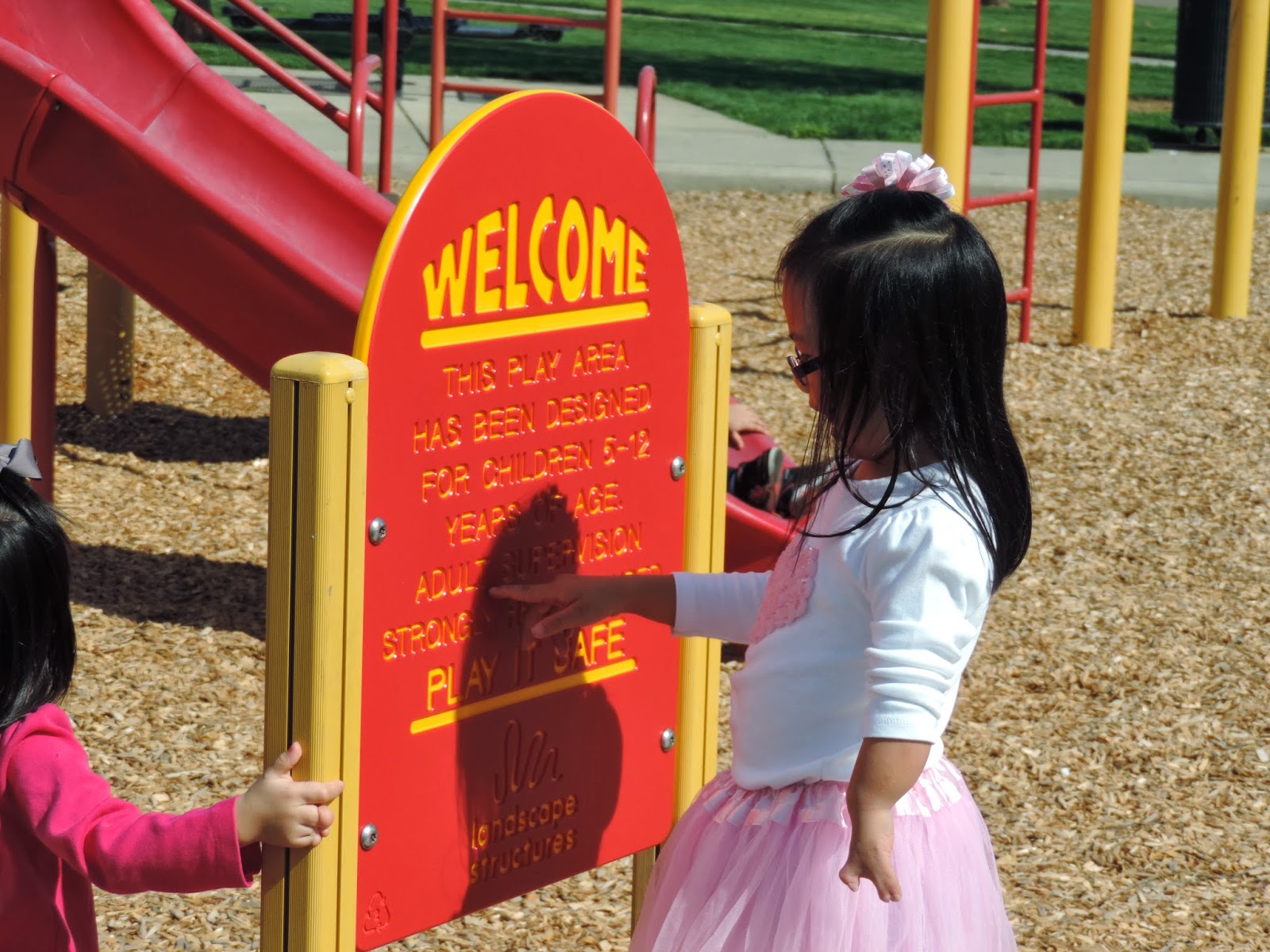 The weather has been getting really nice, so I walked the kids to the park for a little while last weekend.  Hannah's reading is really taking off!  She's doing great sounding things out. 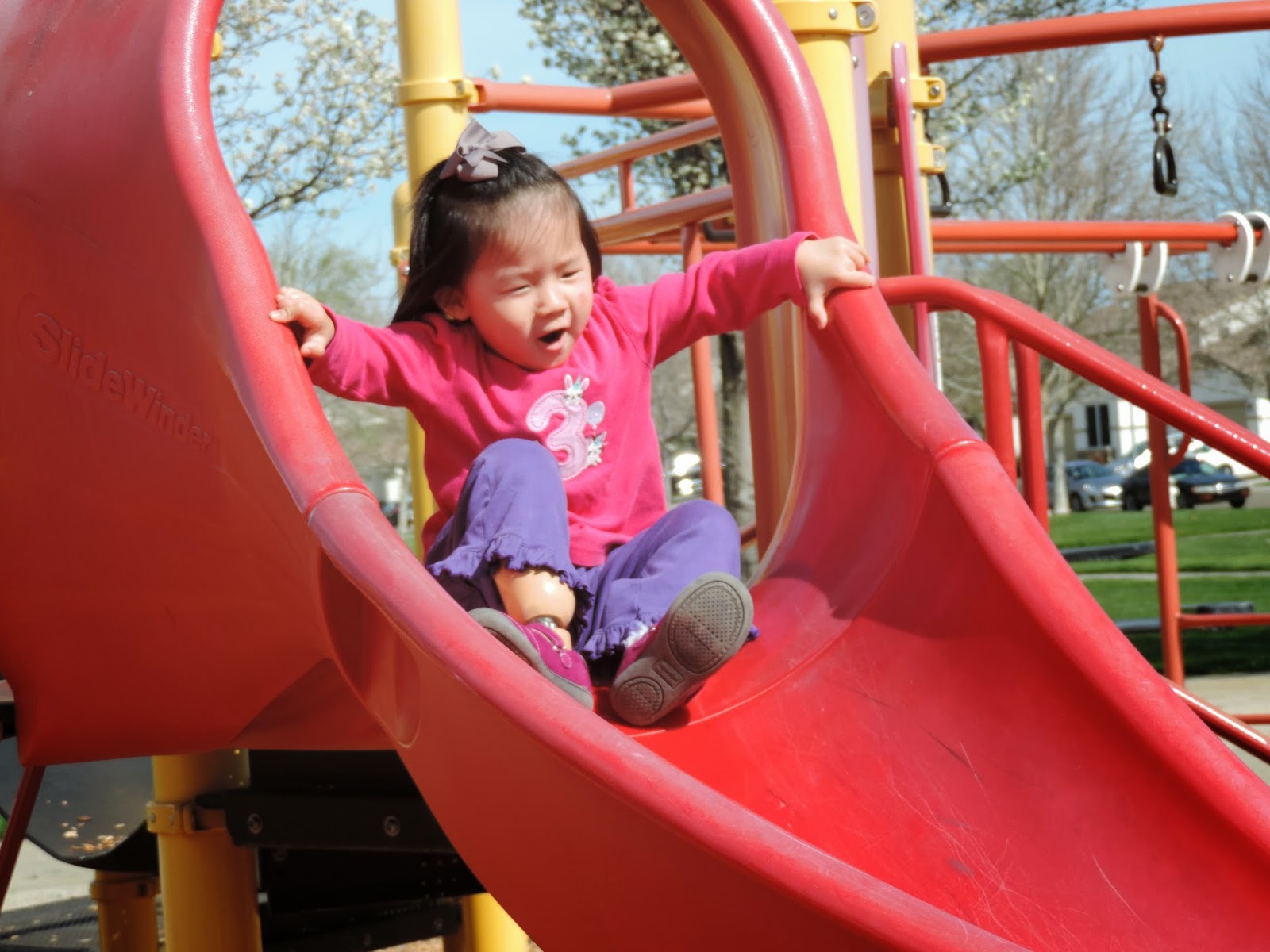 The playground is always such a wonderful place to take pictures. 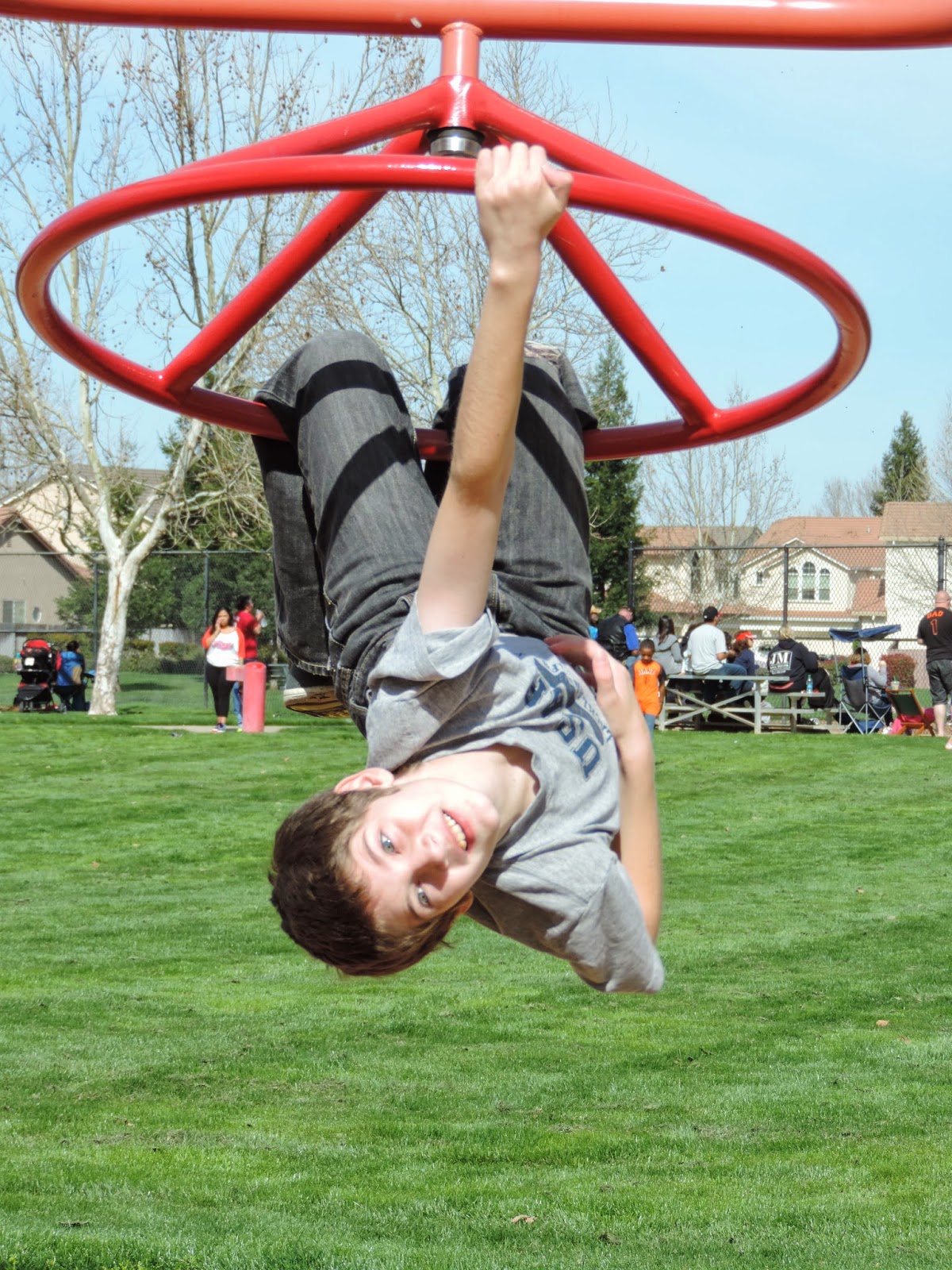 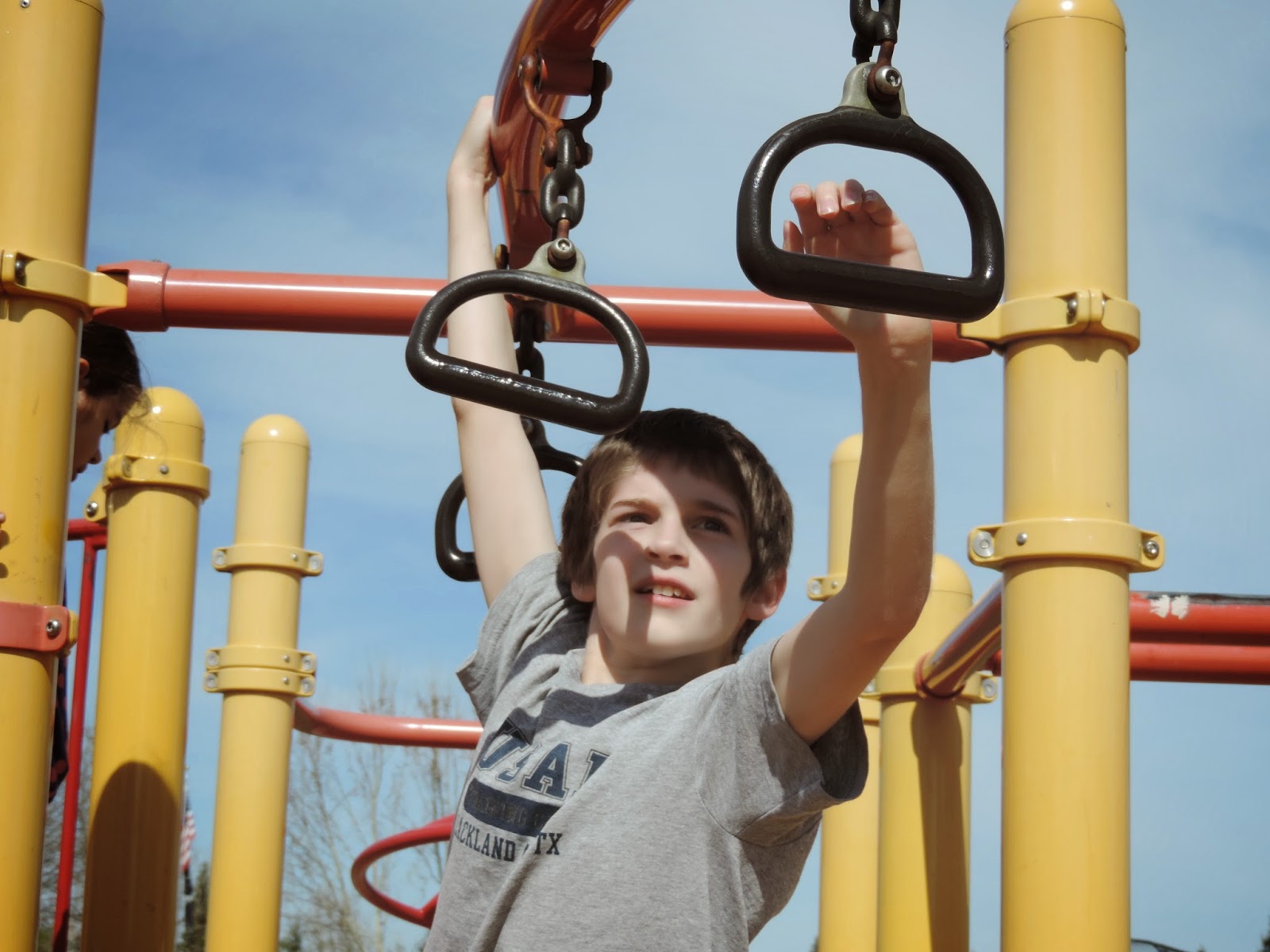 Year of the Monkey suits him. 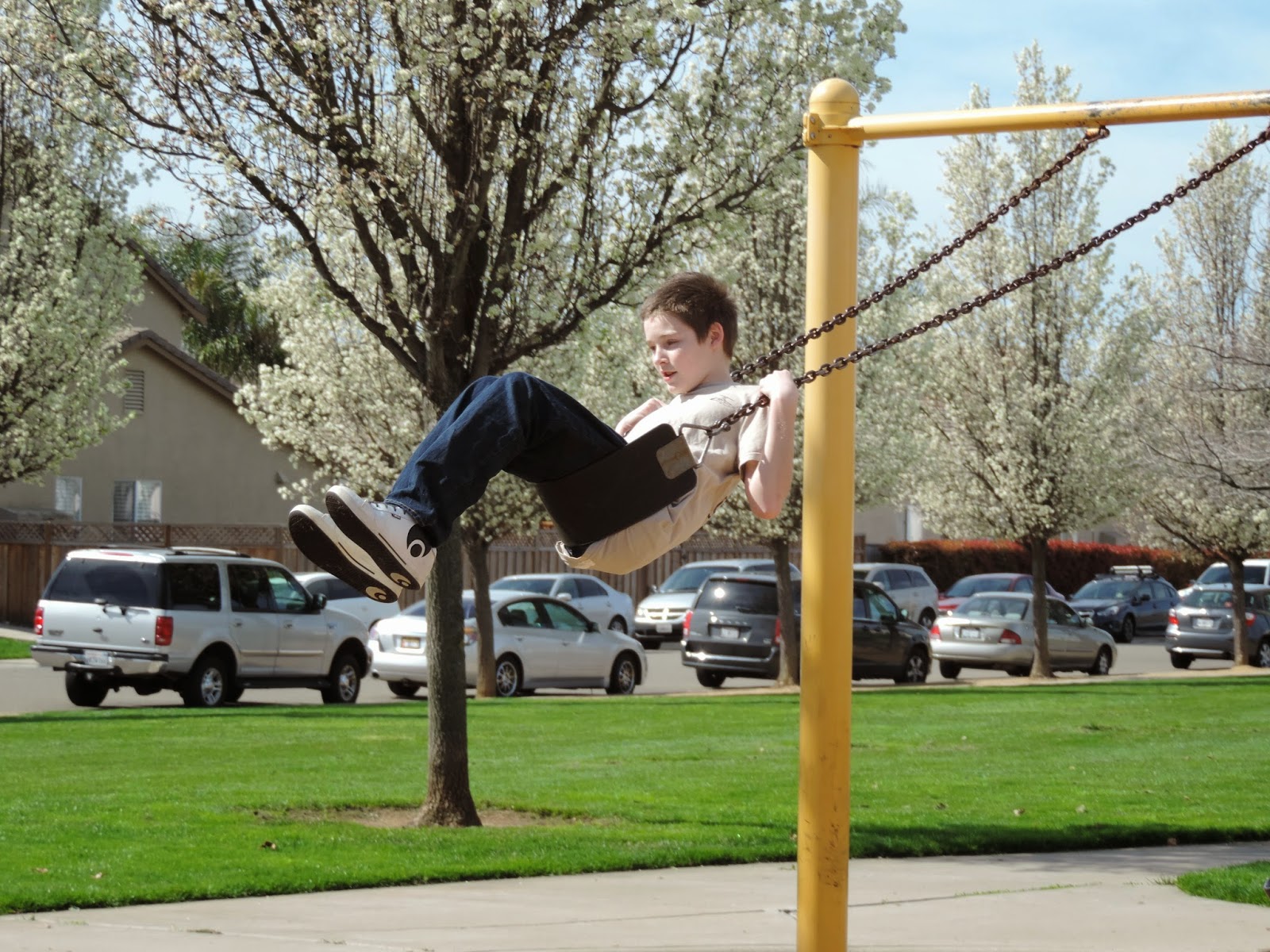 Eli and Brianna were having fun on and off the swings. 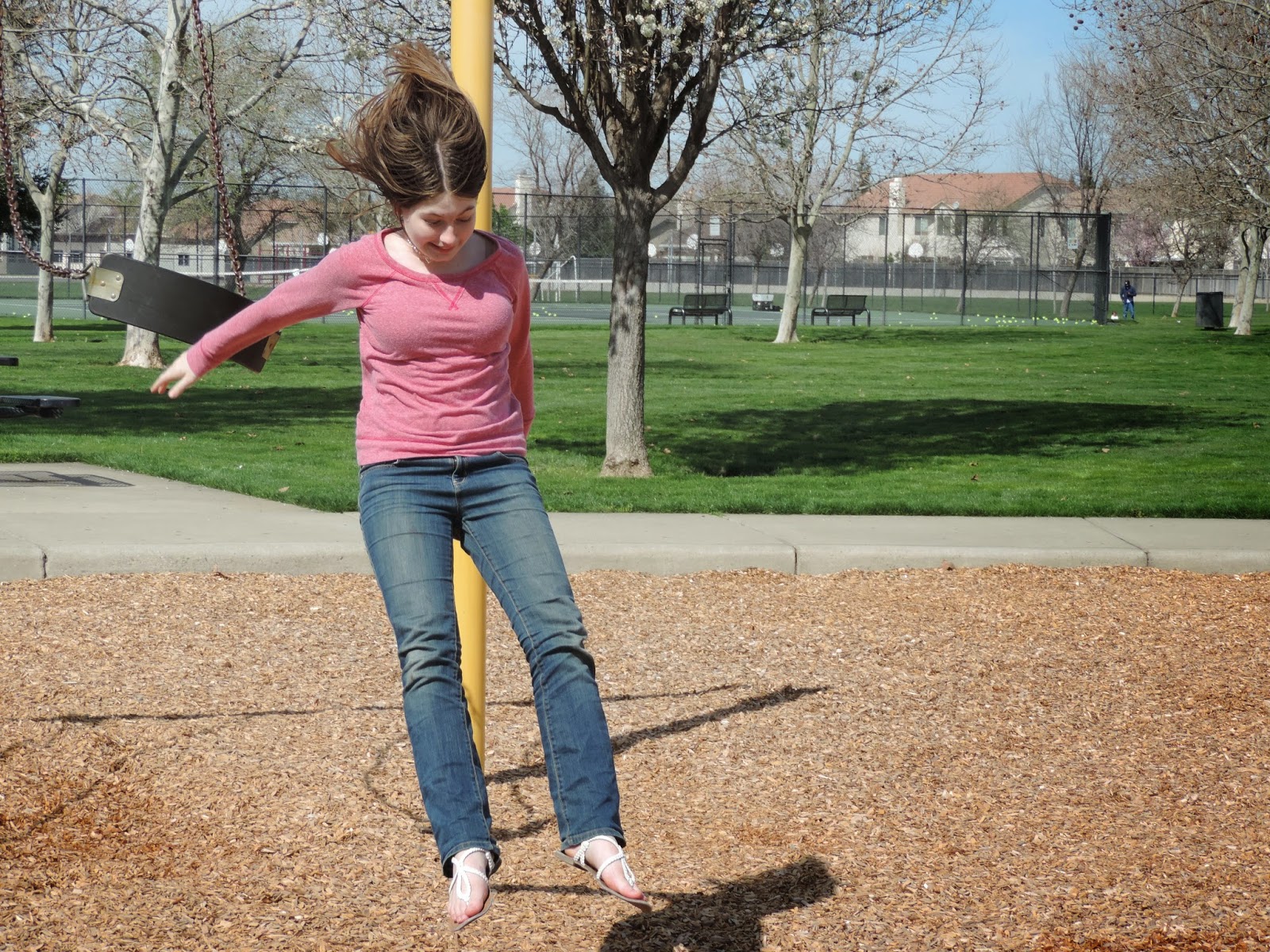 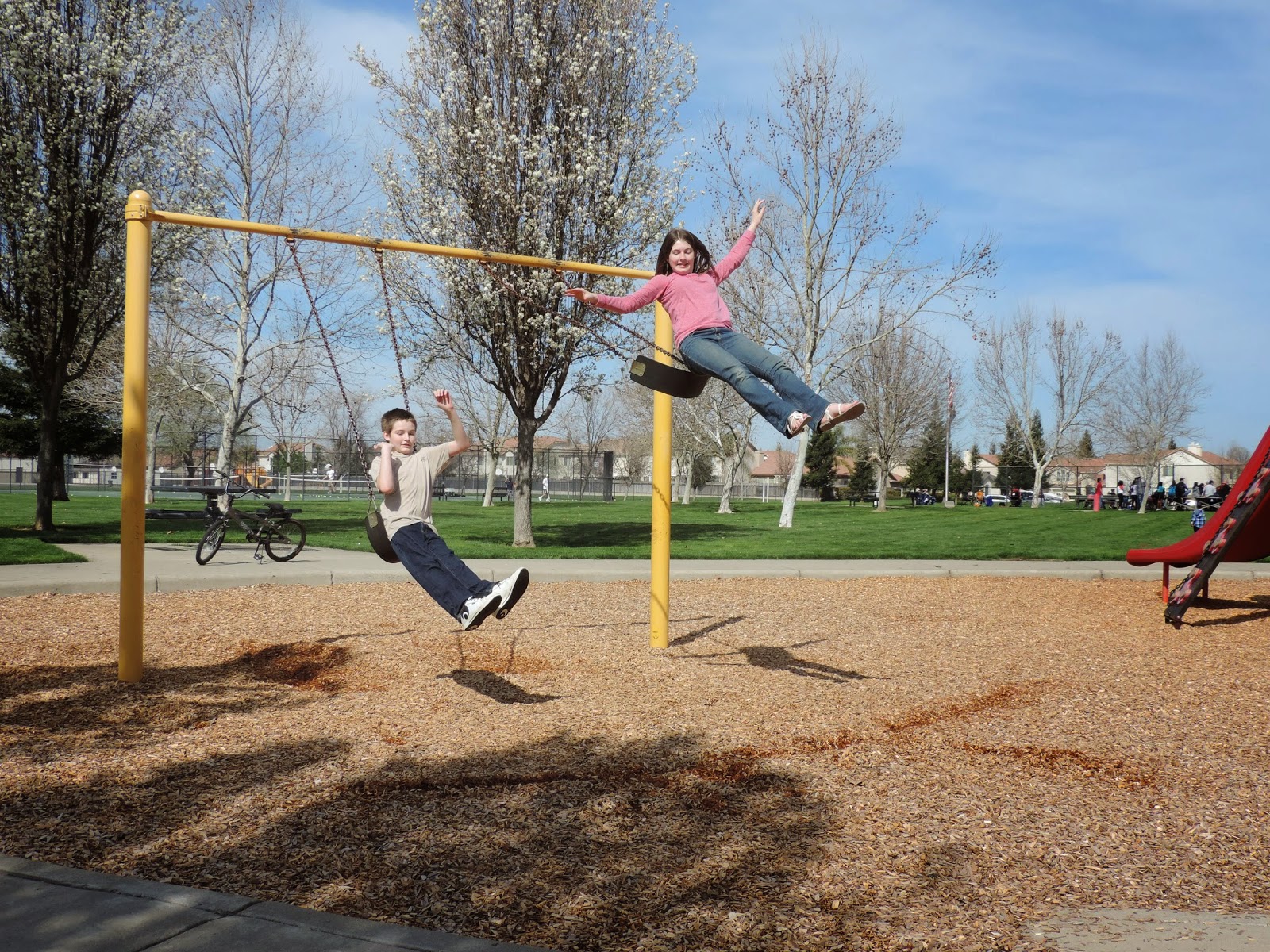 So thankful to have a park within walking distance of the house.  And I love watching the trees burst into blossom! 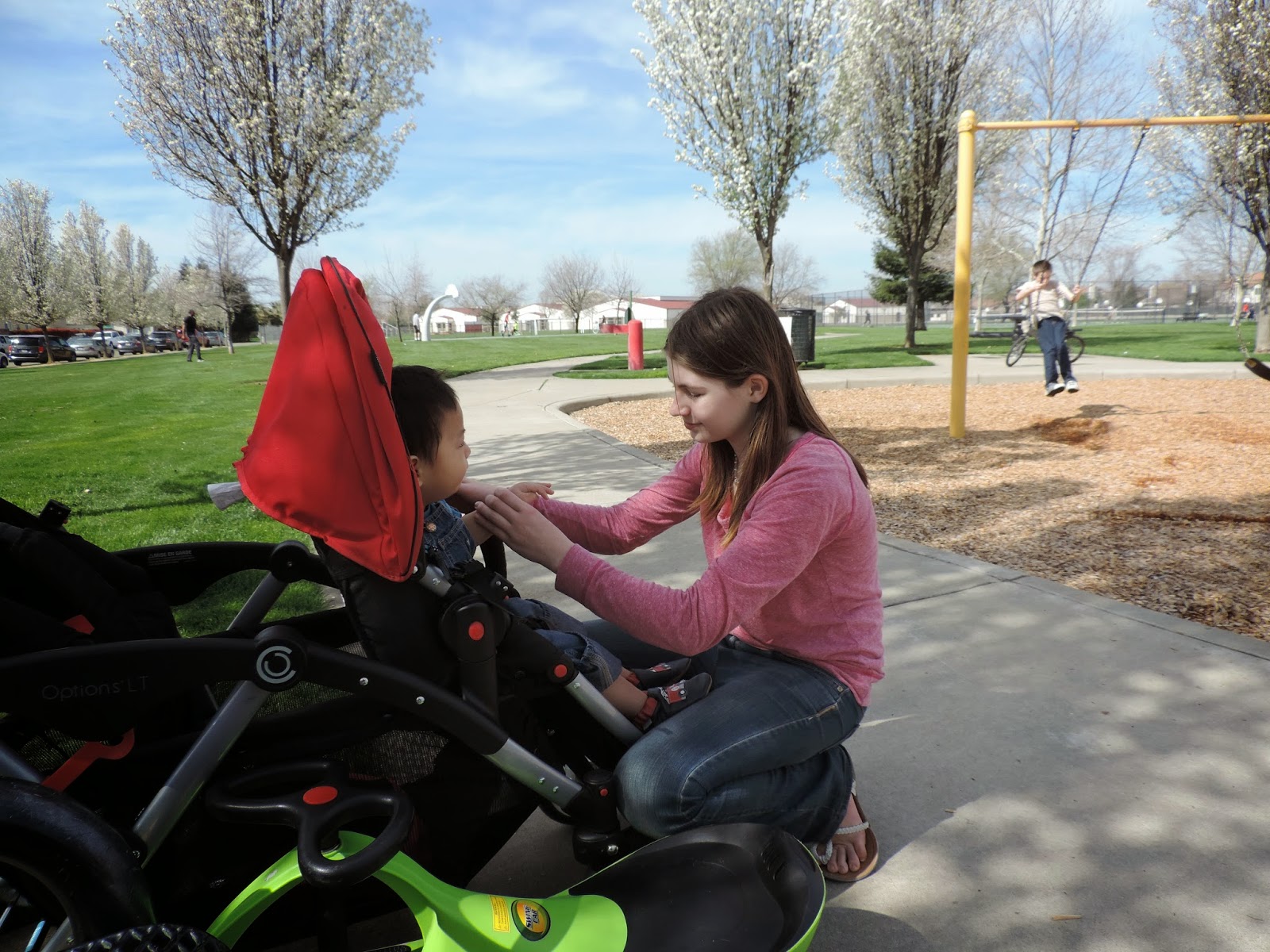 Even Lukey seemed to enjoy the change of scenery for a little while. 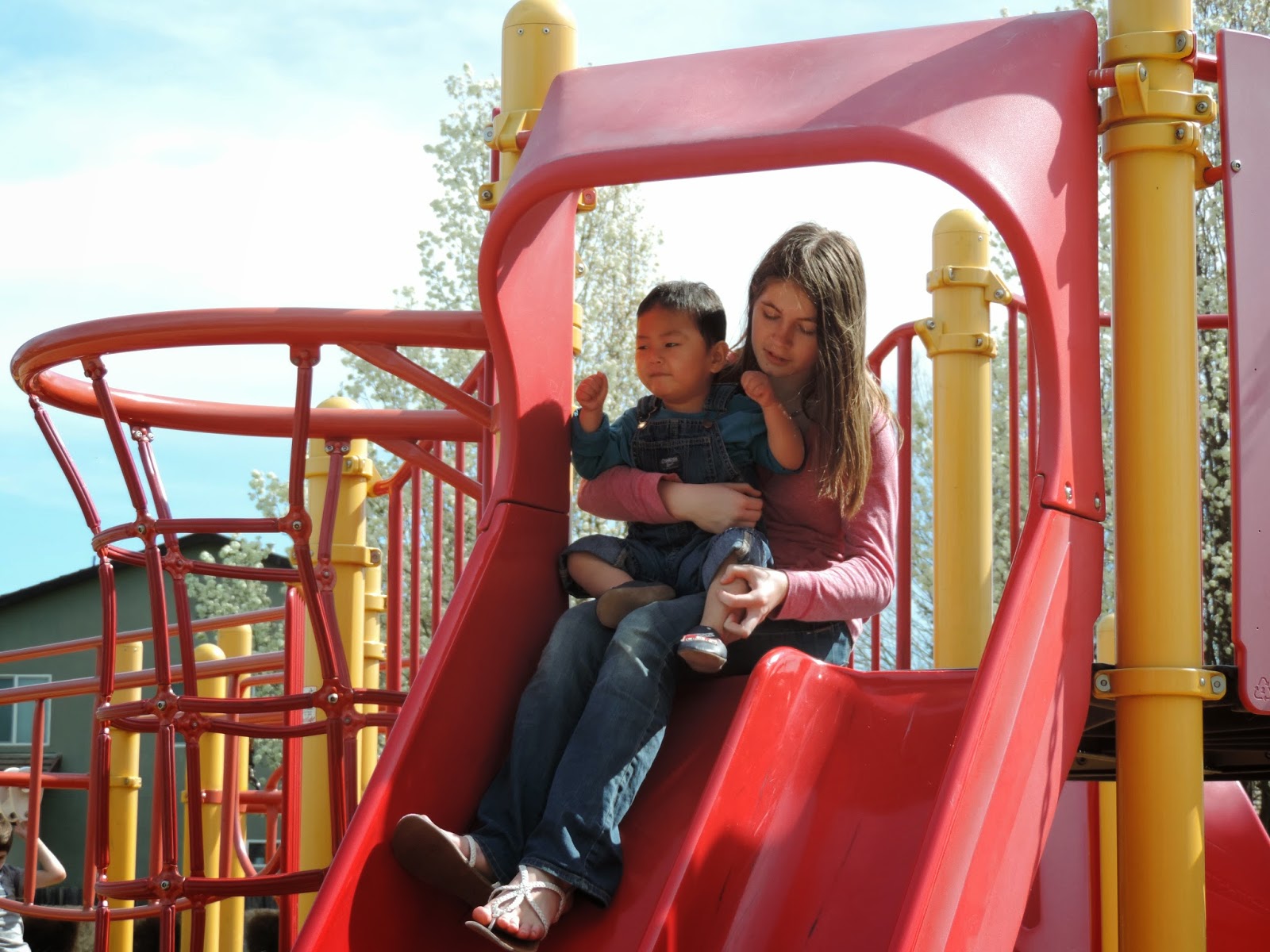 And when he did start crying, at least there were no walls for it to bounce off of. 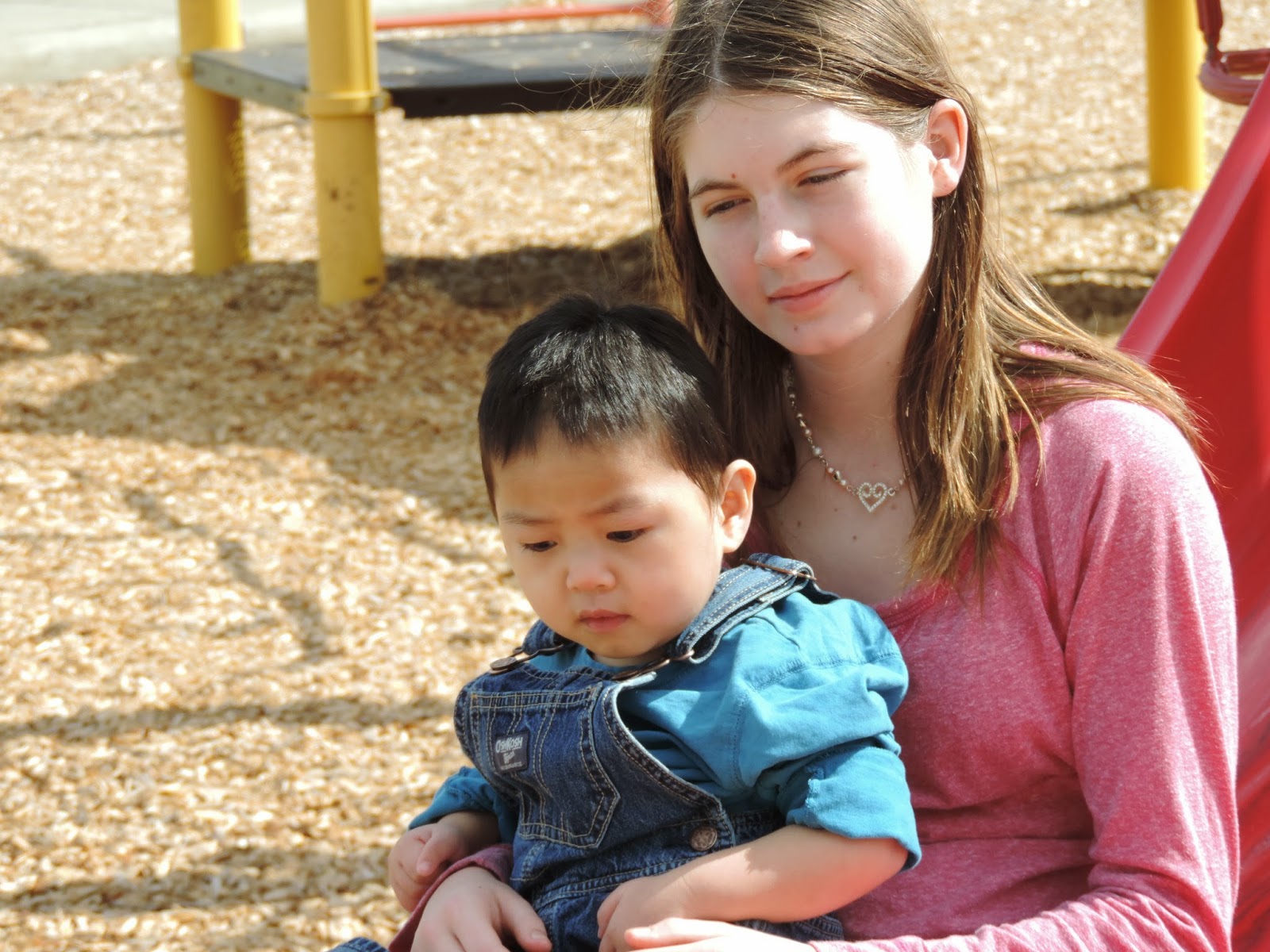 Which actually makes more of a difference than you would think. 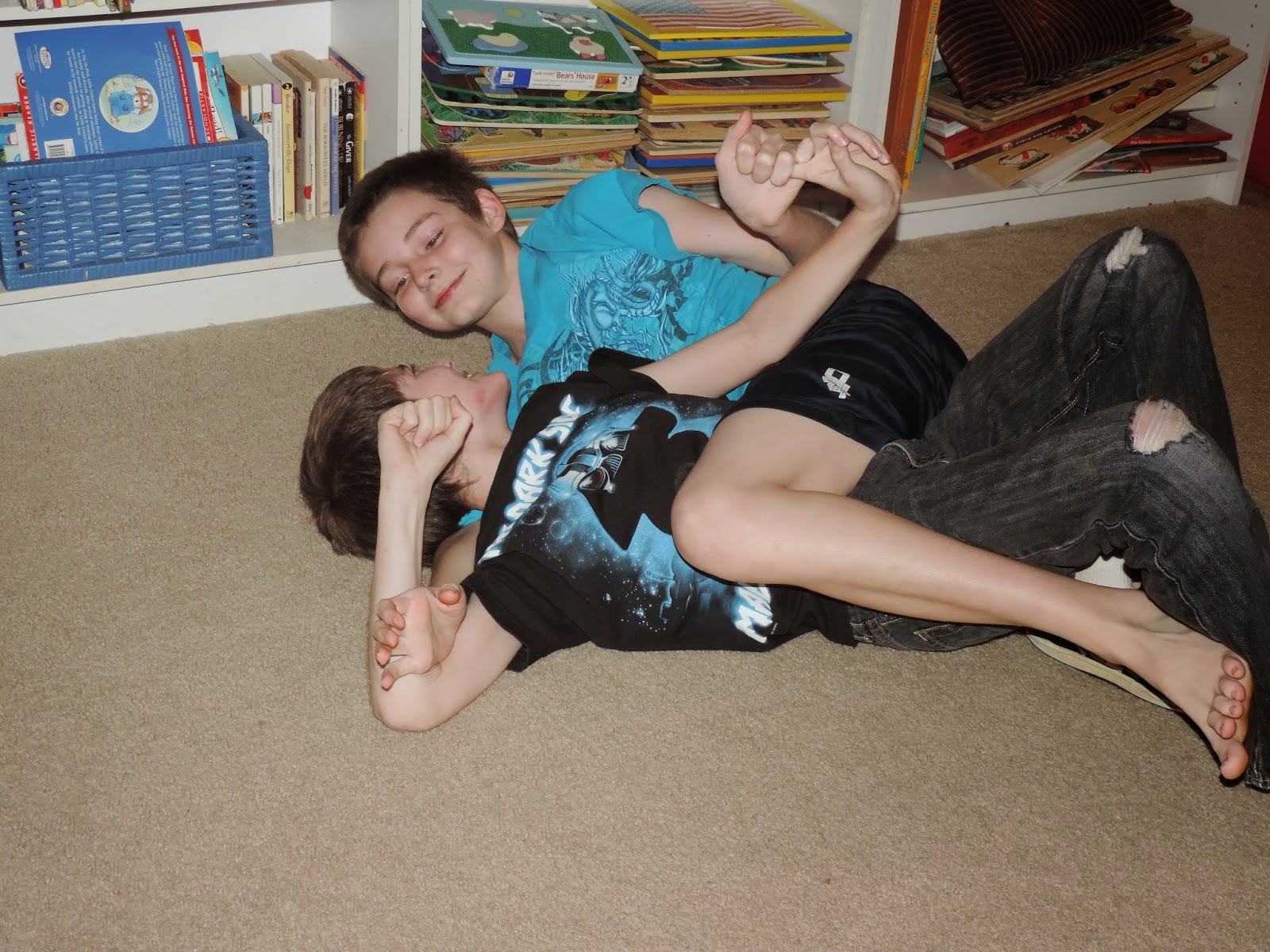 I love how they're wrestling, yet still smiling.
(please note, no actual siblings were permanently harmed in the shooting of this photograph) 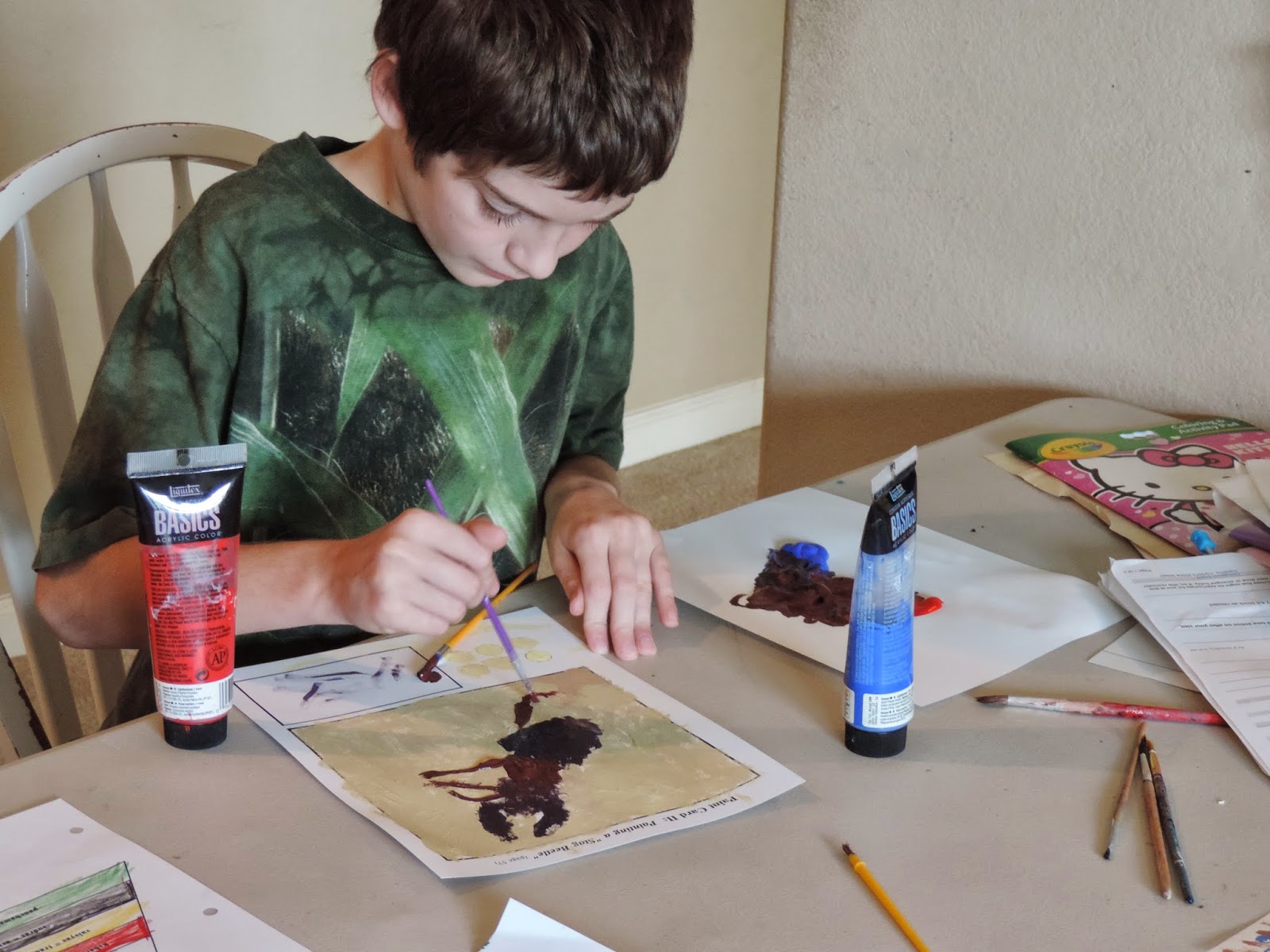 This week, we added details to our insect paintings, and learned about artist's signatures.  Also, the striped worksheet on the table in the above and below photos are about India's caste system. 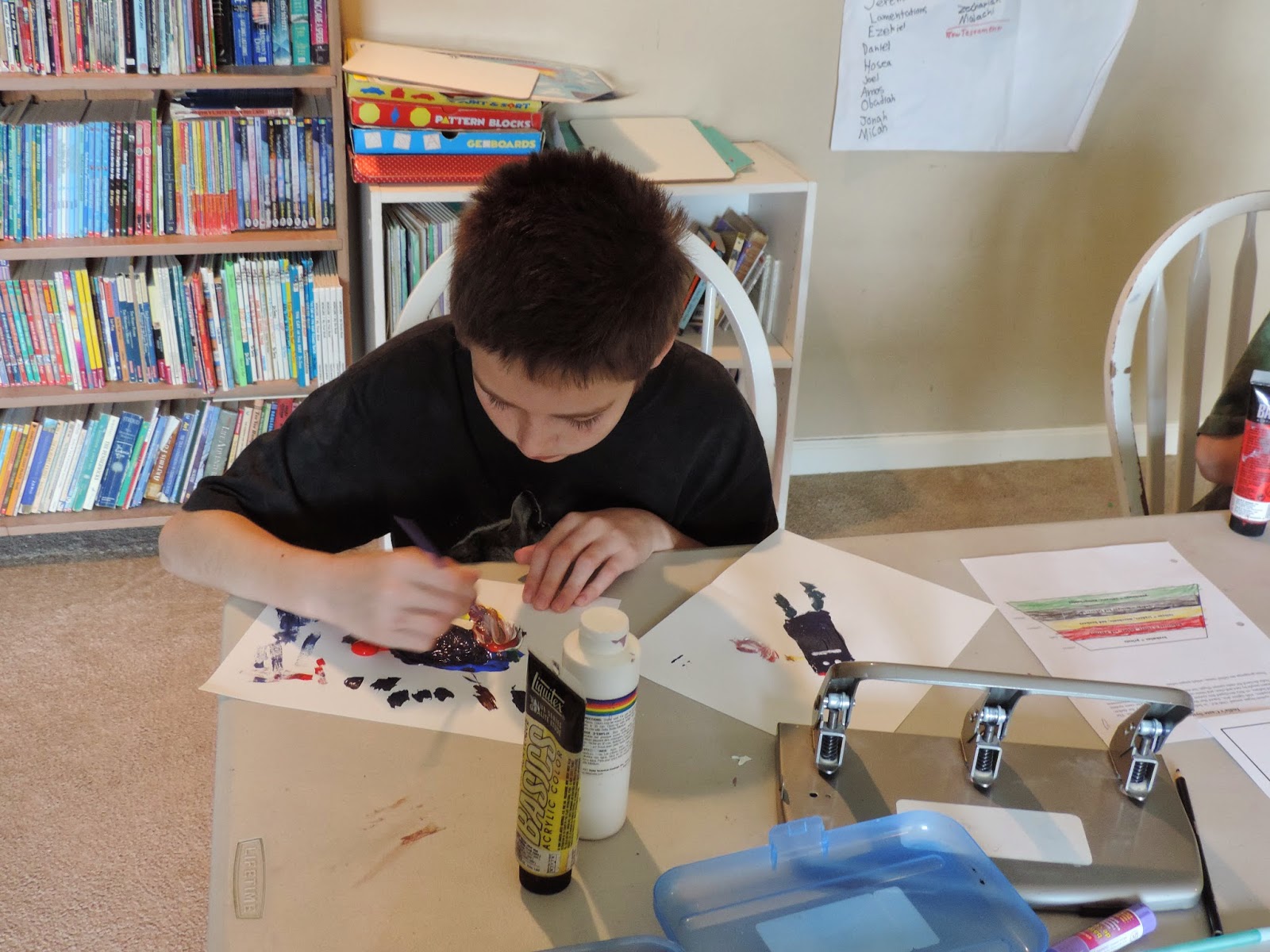 The kids did some free painting, as well.  It's always neat to see what creative things they come up with.  Play and art, art and play, it's hard to determine the line between the two sometimes. 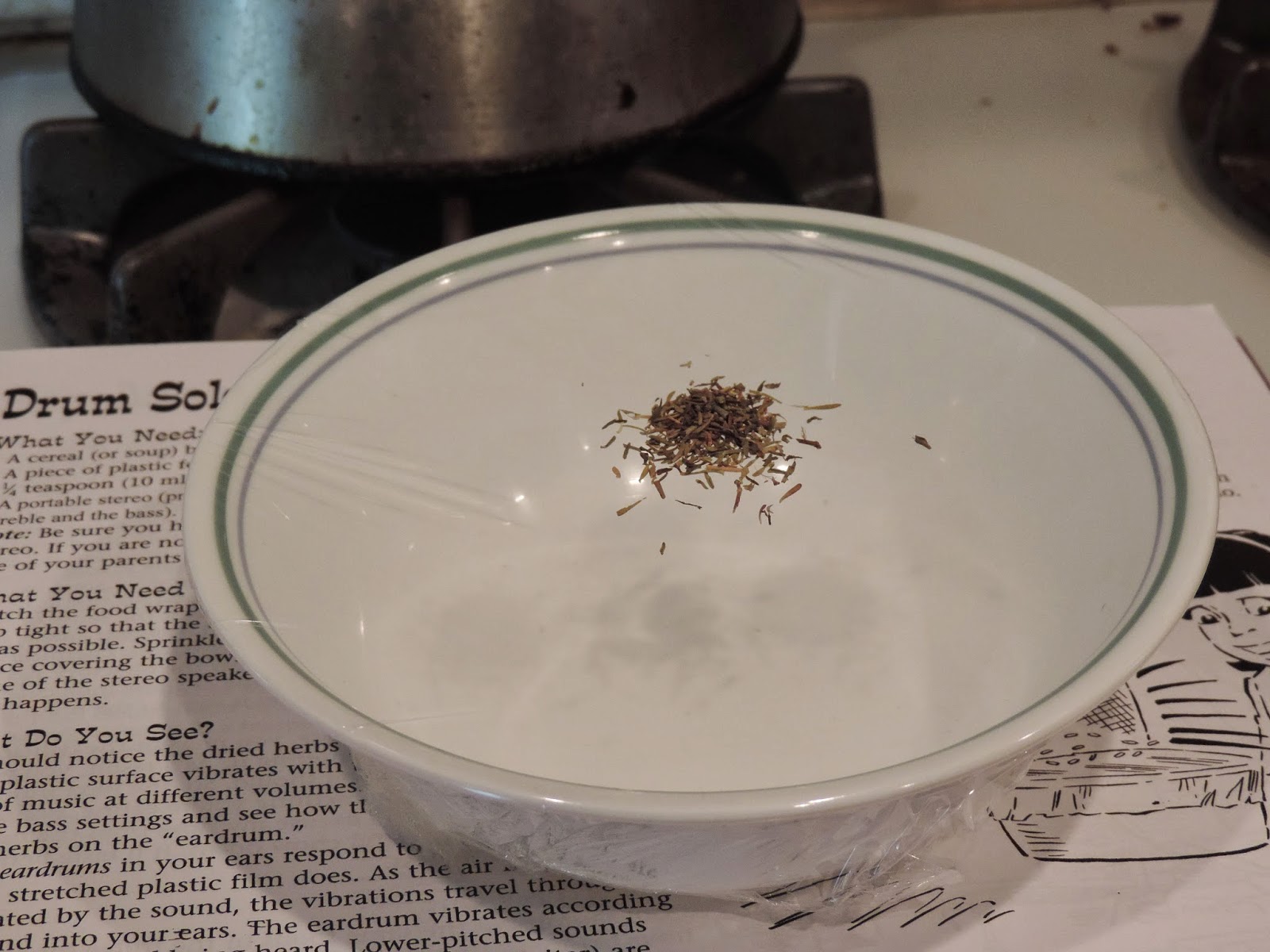 (affiliate link) that we hate, and we had a successful experiment that the kids liked.  We put 1/4 t. of Thyme on plastic wrap stretched over a bowl. 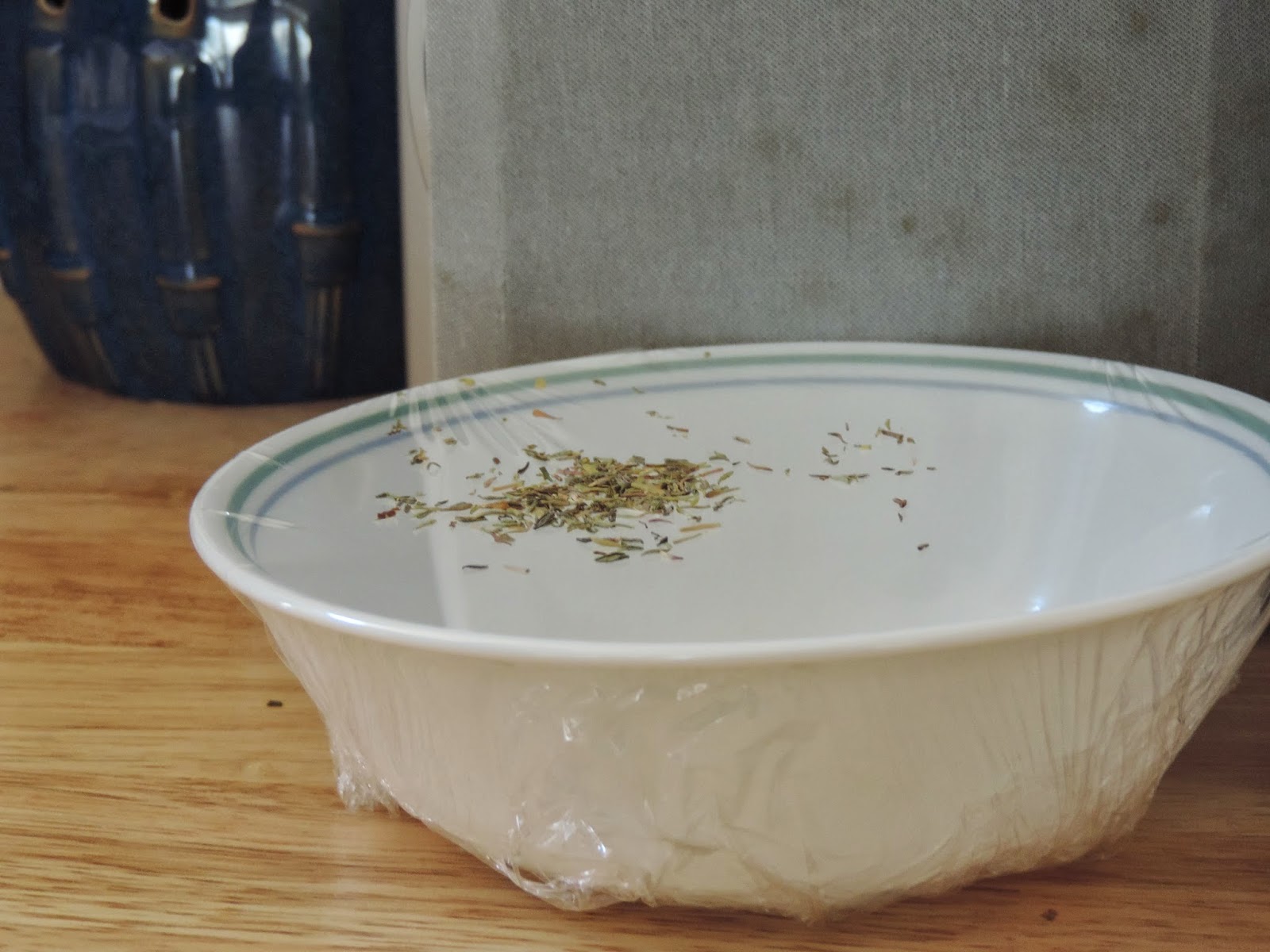 Then we placed the bowl in front of a speaker, and we played LOUD music and watched the thyme bounce around with the beat.  The kids loved this one, and repeated it for Paul when he came home from work. 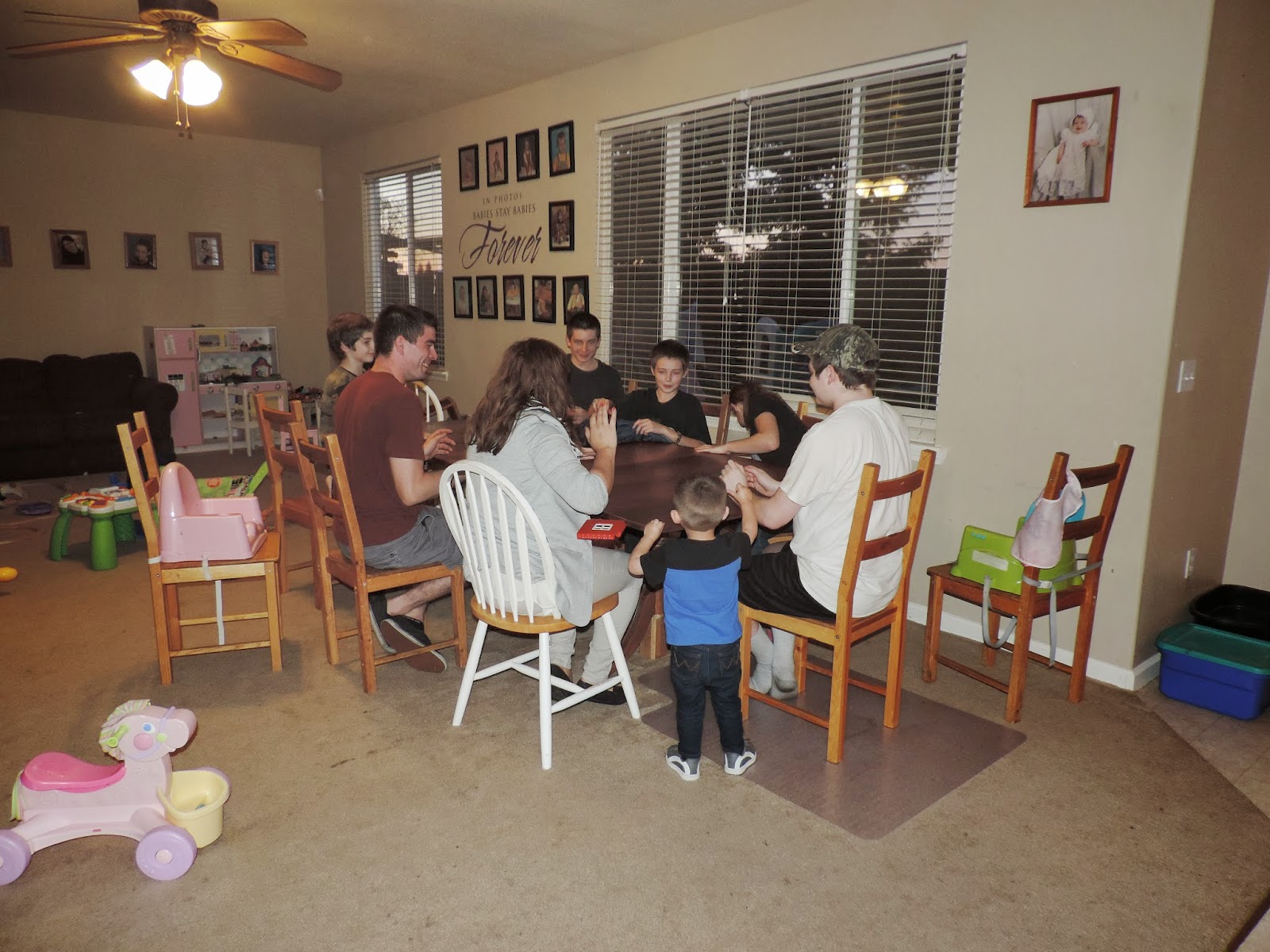 We enjoyed having Zach and his girlfriend over for dinner this week.  She has a little boy who fits right in around here.  It's very cute to see everyone playing together. 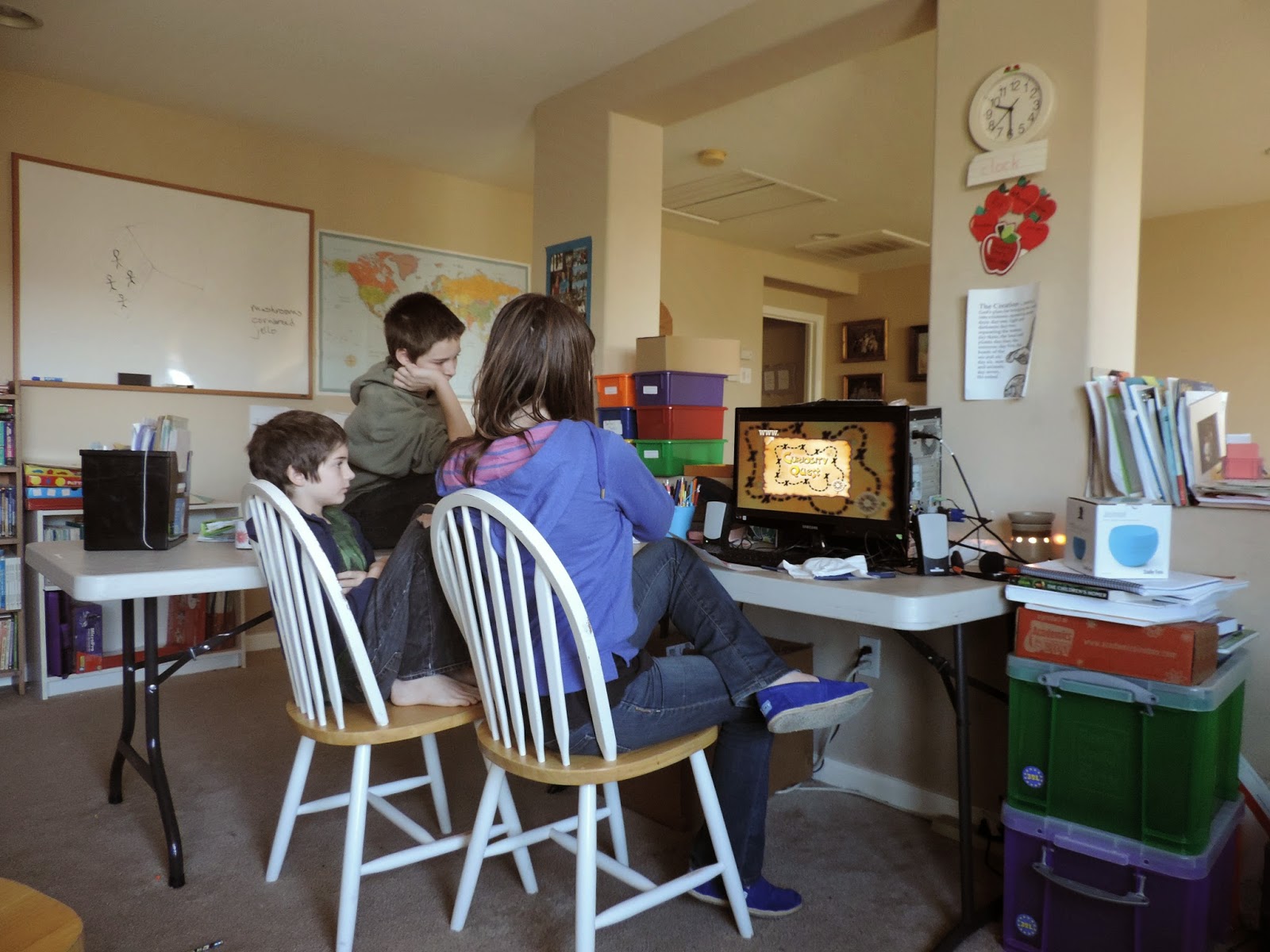 We are reviewing a DVD series!  So far, we've watched 2 episodes, and they're very interesting! 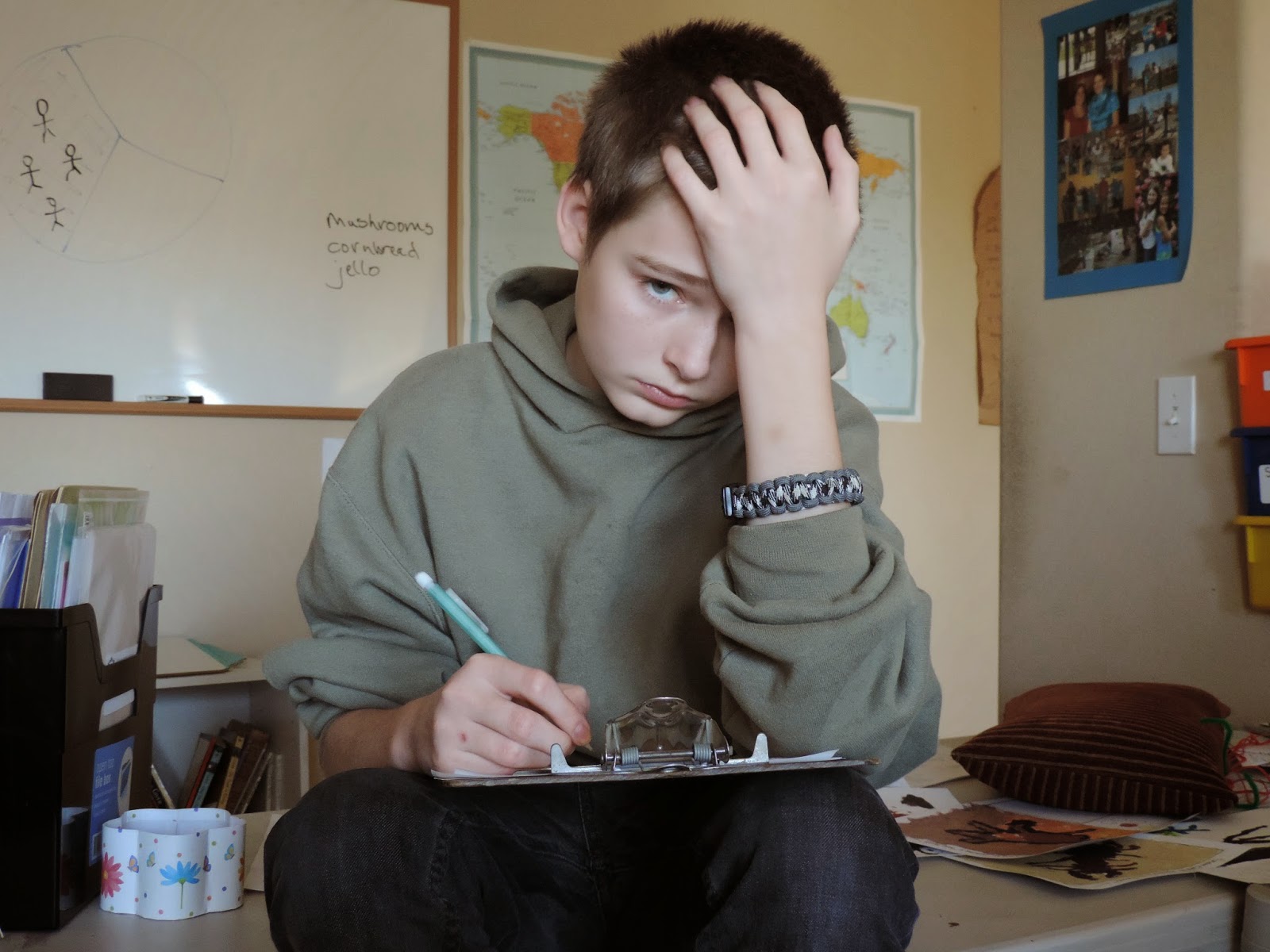 Which is kind of a nice break from writing assignments, right, Eli? 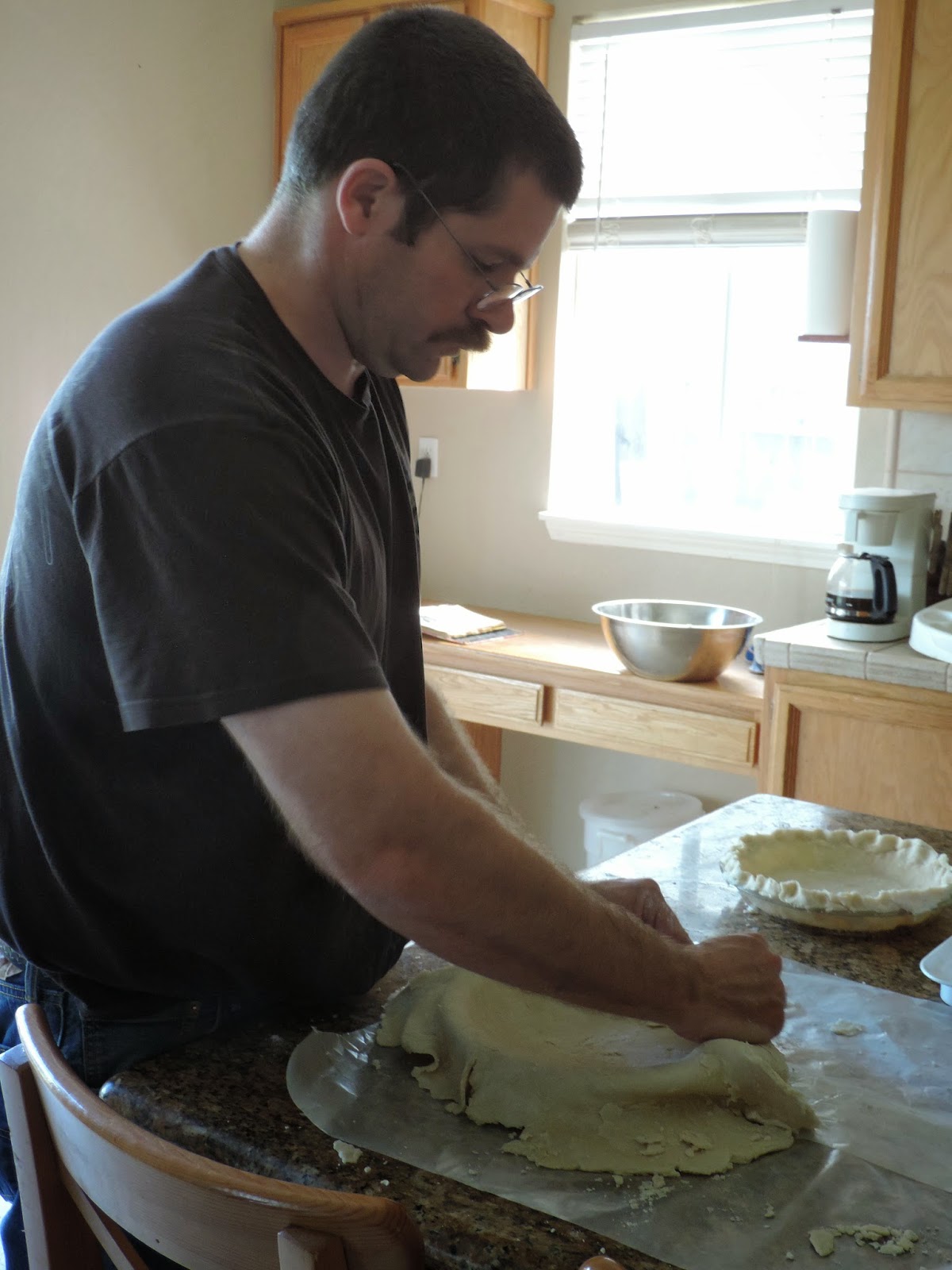 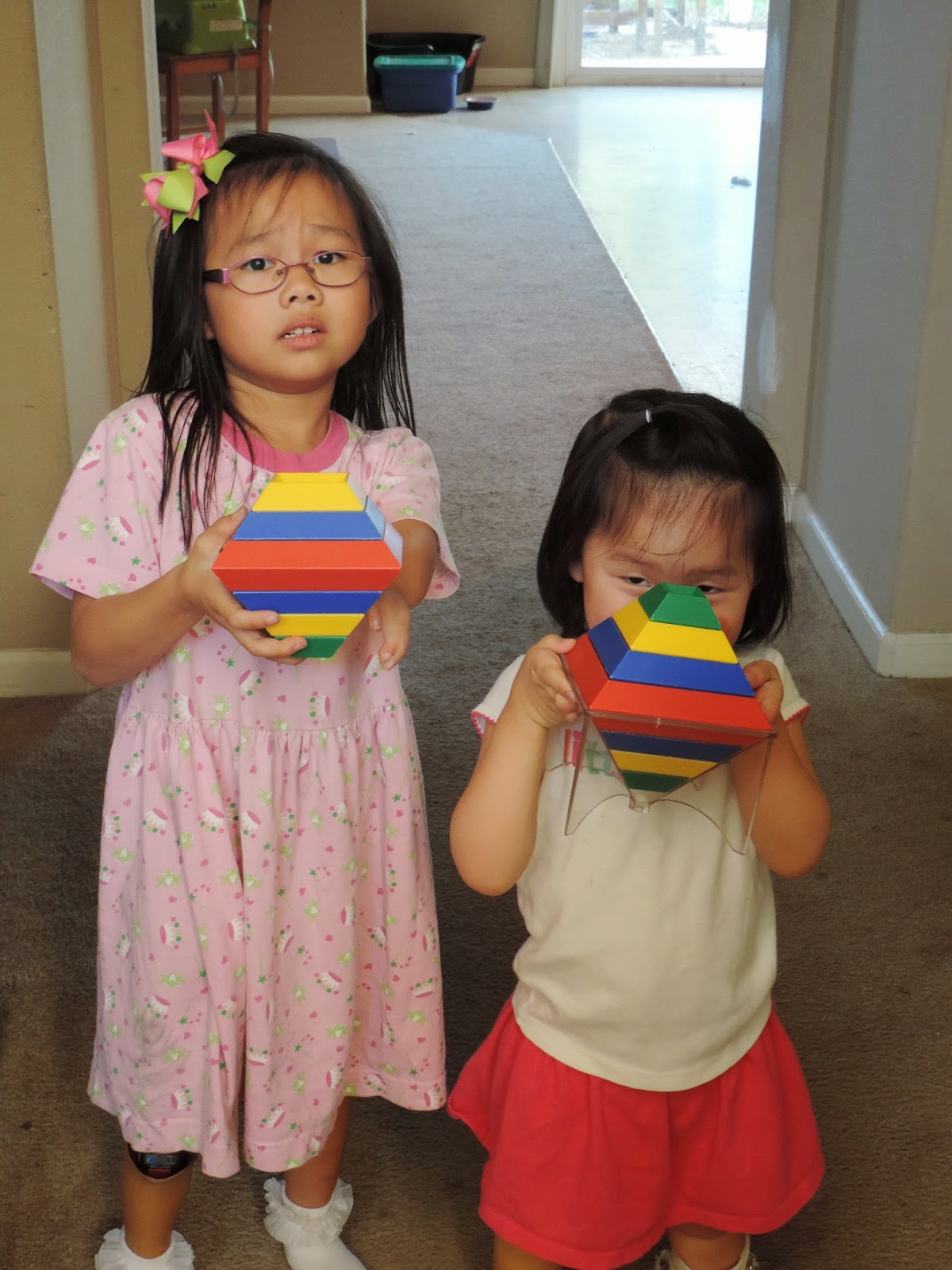 Katie insisted that I take a picture of her Wedgit creation.  There's still a lot of making sure that everything is "fair" and "same" going on with both the girls.  I get where it's coming from, but it requires patience and understanding to deal with. 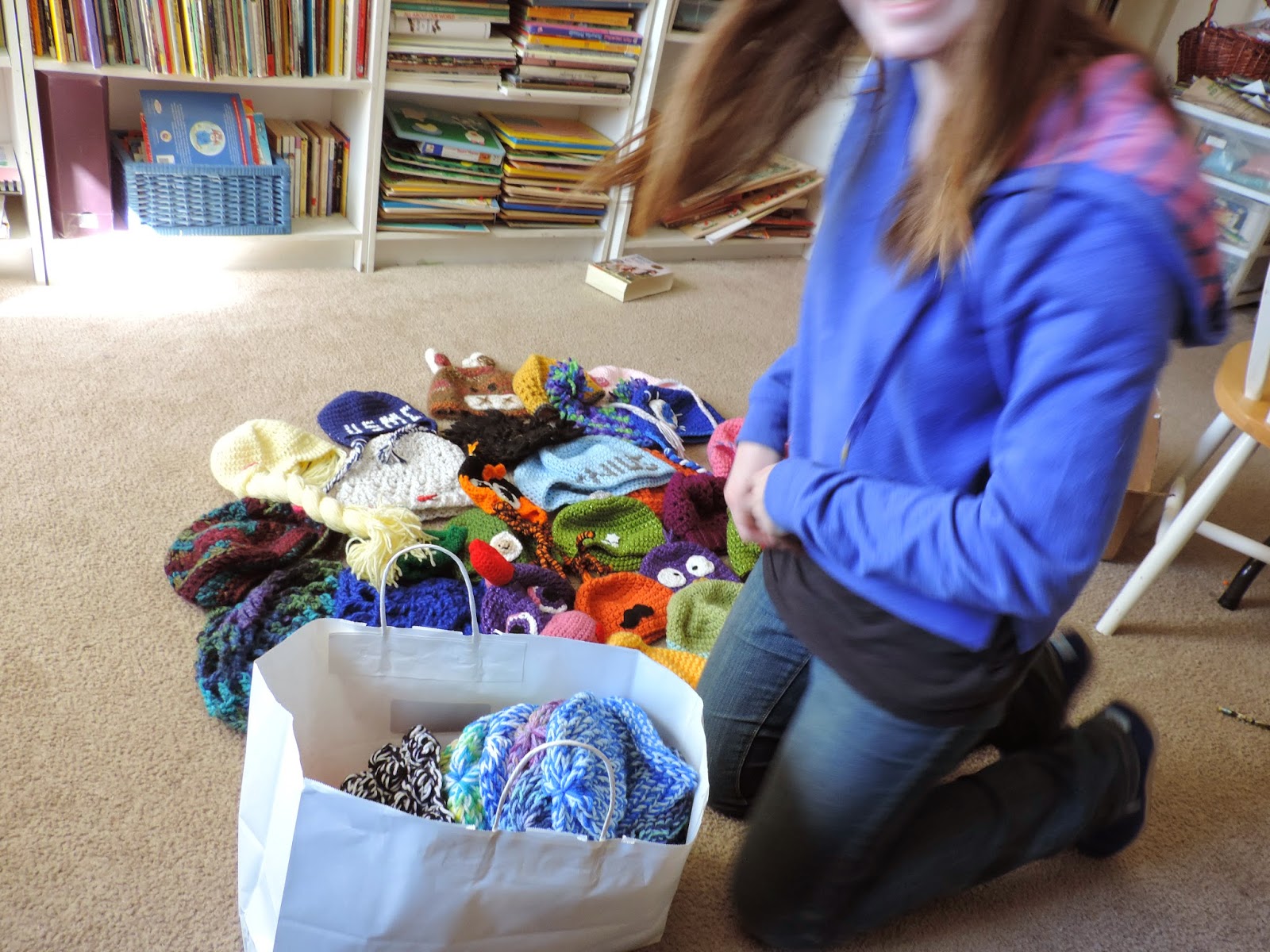 Brianna collected a boatload of hats for a missions program in Ecuador.  Some that she knit, and some that her Ravelry friends knit or crochet. 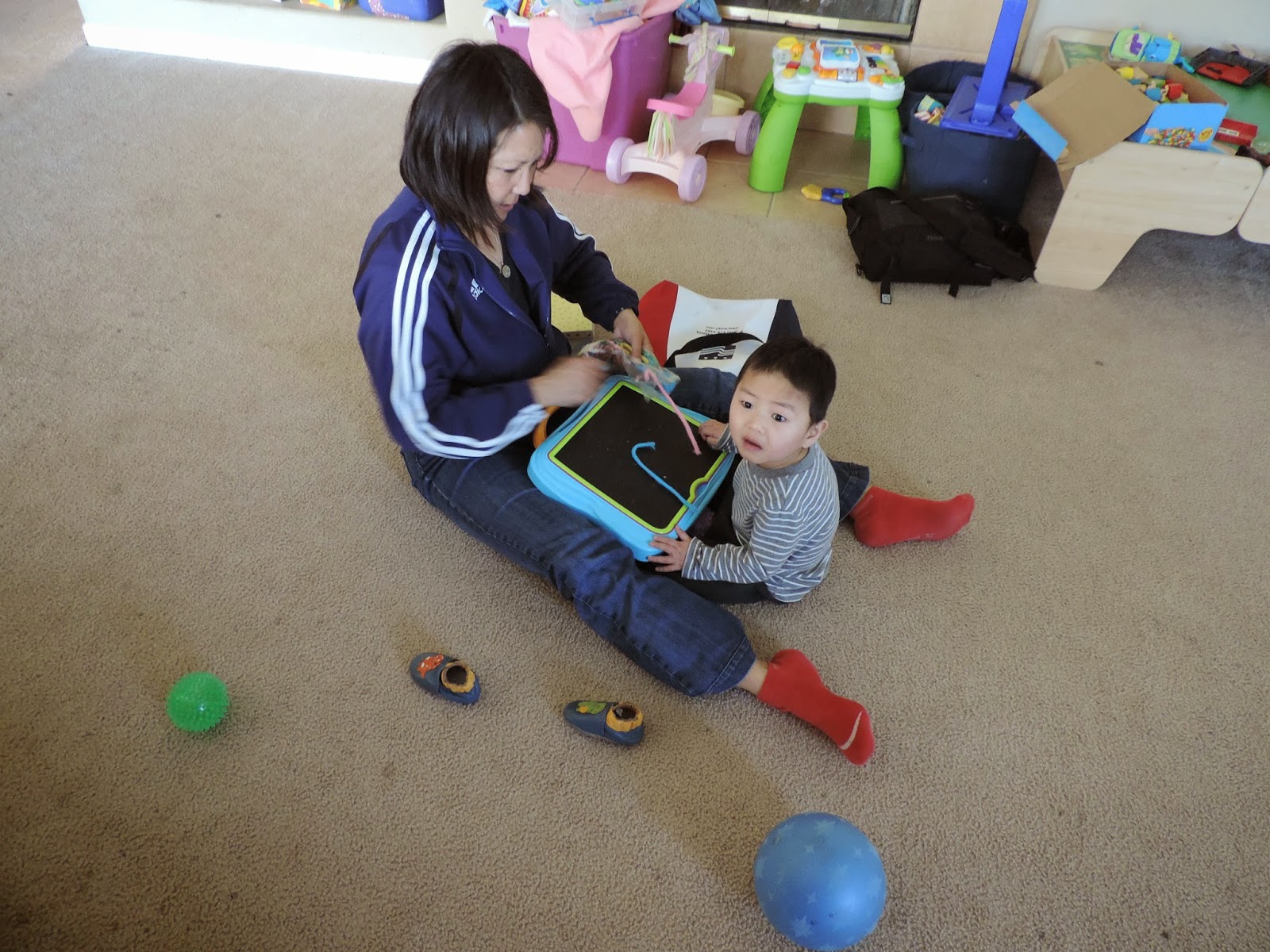 Luke and his physical therapist.  Next week is the transition meeting with the school district.  It's a sort of pre-IEP meeting.  Not to be confused with the IFSP meeting that we just had a month or so ago.  At some point, I want to count up all the appointments, therapies, and meetings that we've had so far.  Maybe it will justify how tired I am! 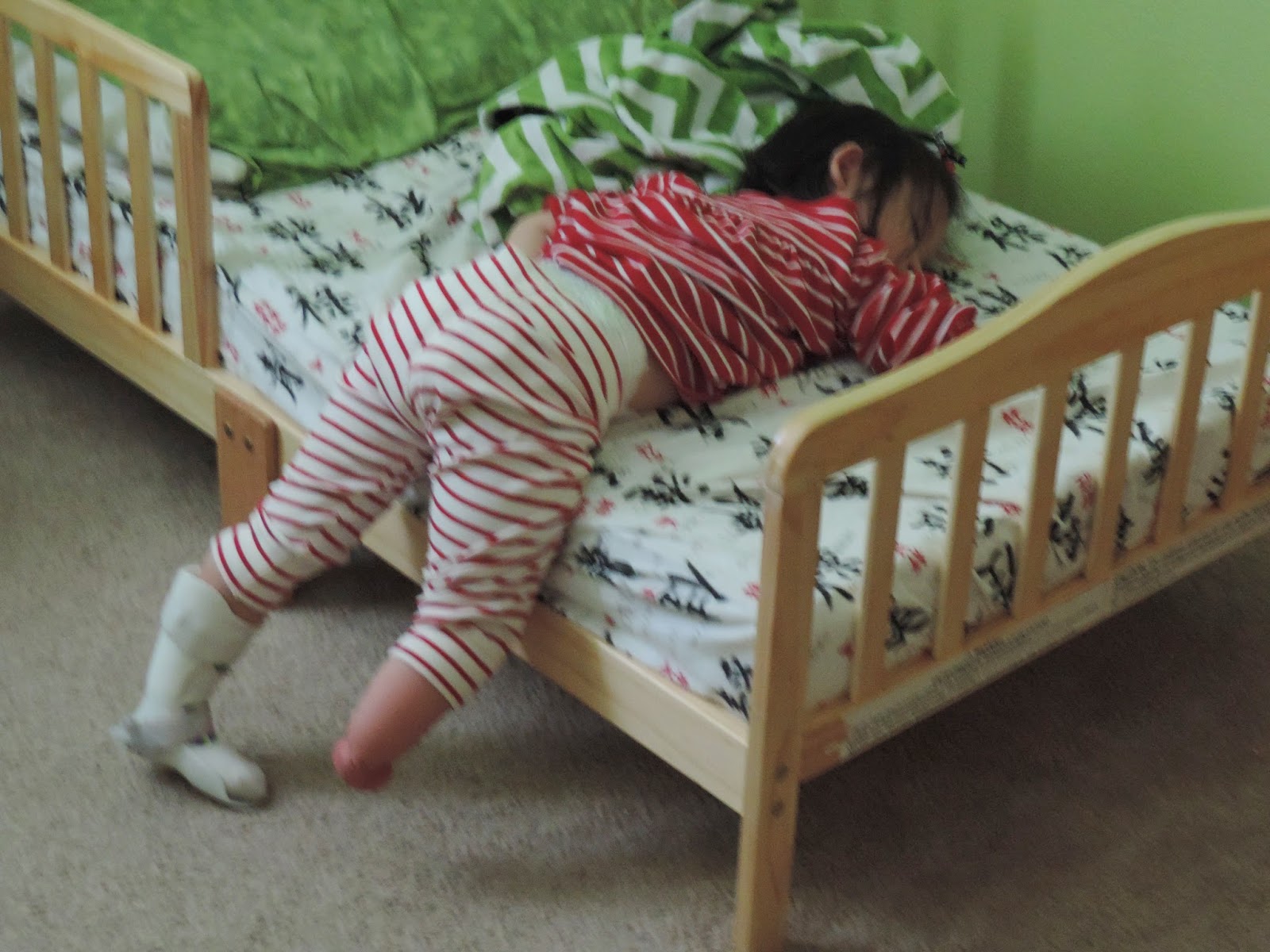 After naps, I walked into the panda room to get Luke one day and found Katie sleeping like this.  Doesn't look comfortable! 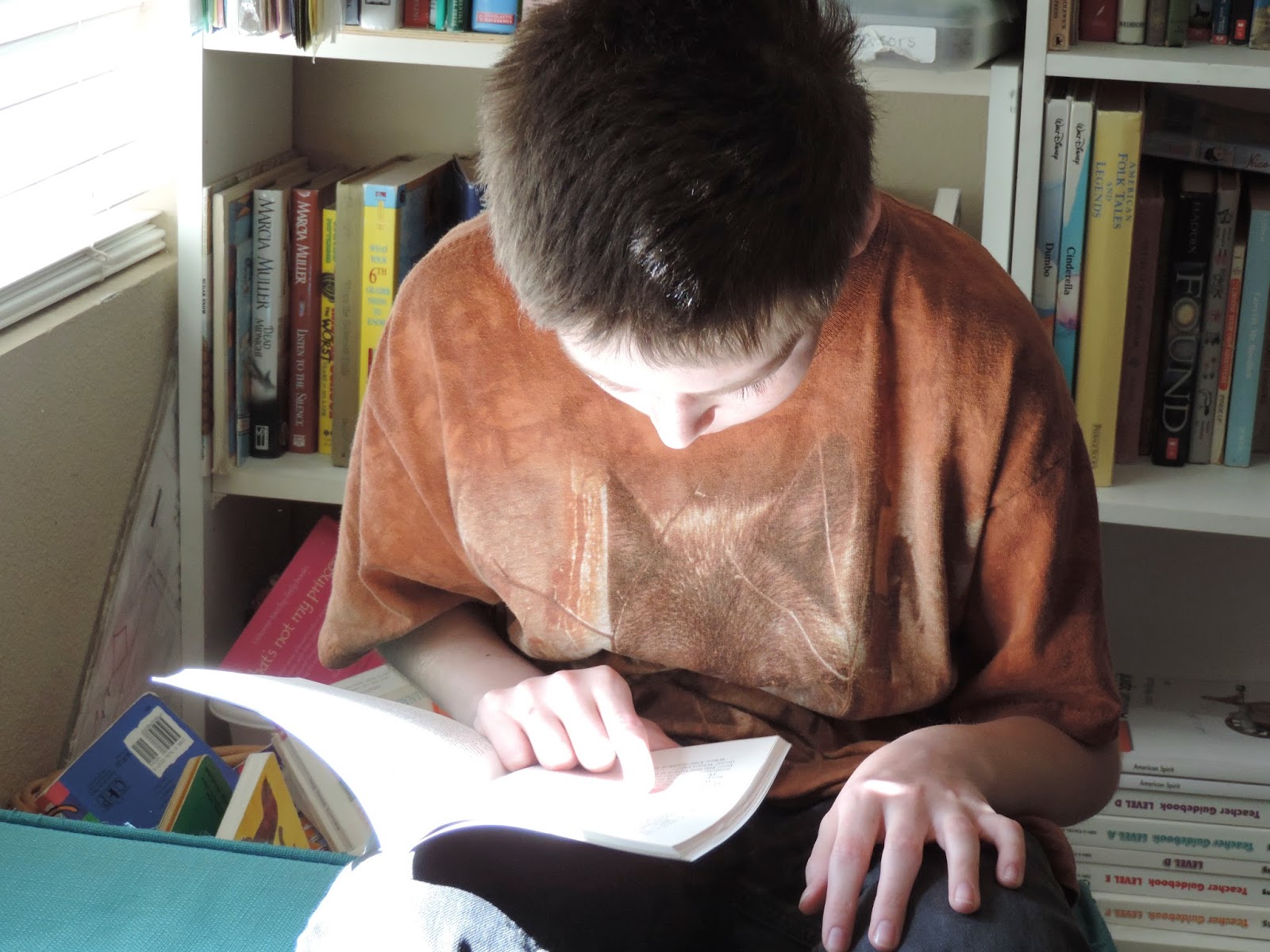 Eli discovered the new books I'd been holding back.  He's finished this one, and is working through the other one now.

Academically, we've had a lot of fun this week, but most of the pictures I'm saving for reviews we're working on.  Let's just say, in addition to the sounds of Spanish and German from the kids' Mango Languages lessons, we've added an Aussie accent on the computer, as well.  I happen to like it! 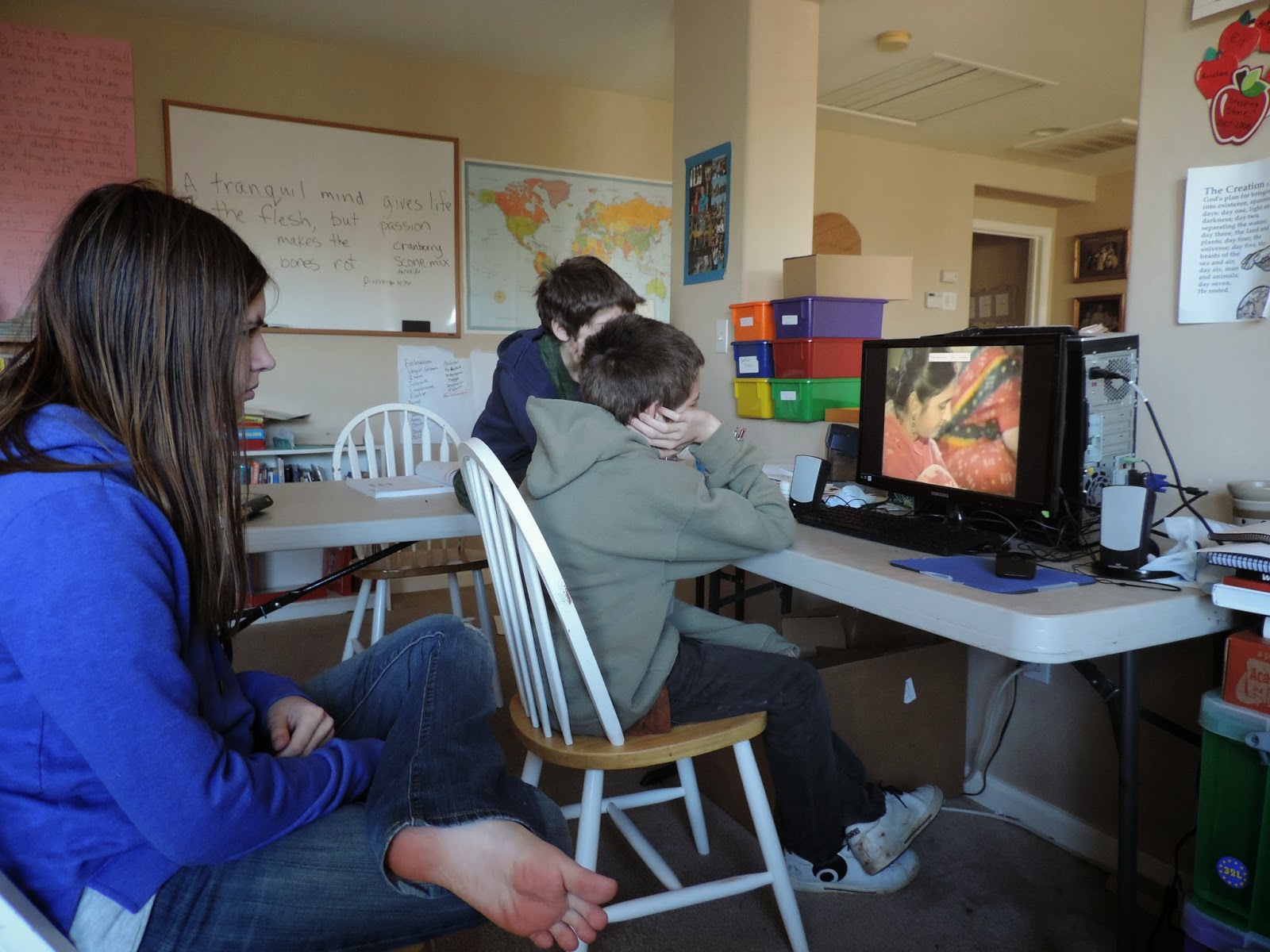 We watched What The Ancients Knew:  India on YouTube, which was really interesting.  We also learned about Buddhist and Hindu religions this week.  And we began a new audio book, which is always a fun treat!

Looking ahead, this coming week looks pretty mundane, but the following week, we hit Jonah, and also learn about Greek spinning and weaving, and the Assyrian Empire.  I'll have to hit Pinterest and see what I can come up with to go with Jonah.  Something to look forward to.