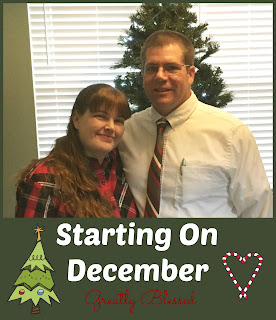 Let's see if I can get at least the first half of December written up while it's still December. 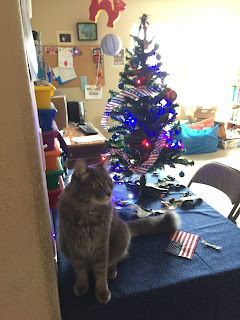 Grumman is delighted with the season.  He's pretty sure my militree (military tree, with red/white/blue lights and patriotic/military ornaments) is his own personal enrichment. 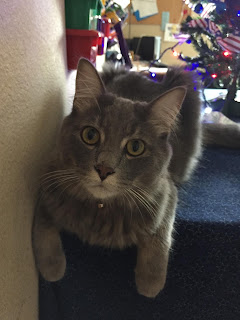 And while that wasn't my intention, let's face it, he's not wrong. 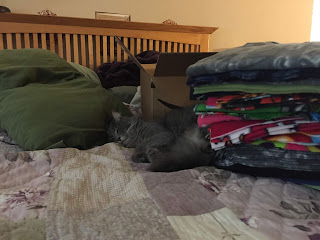 The December craft I taught at the kids' school was fleece cat beds for SPCA.  I cut and cut and cut a stack of fleece for us to start with, using up roughly 2/3 of my fleece stash.  I'm really happy to be moving some fabric OUT of the sewing room, and for a good cause, too.  (Grumman, of course, thinks my bed is a cat bed.) 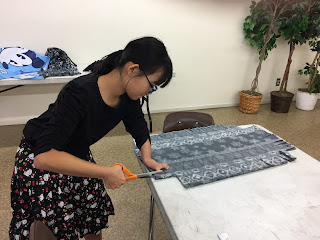 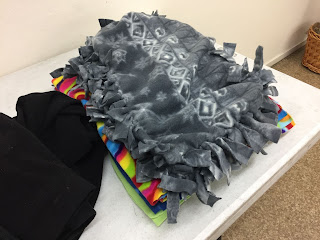 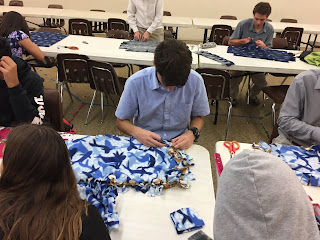 Jack, tying his fringe together.

It was fun to see all the old prints again.  The sharks he's working on there, I used to make Sam a hoodie, when he was obsessed with whales, sharks, and dolphins. 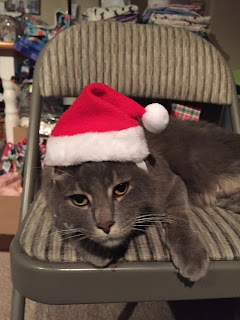 I finally donated the Lion Dance costume.  It's too short for Grumman's long body.  But I consoled myself by getting him a Santa hat, instead.  He's Not Amused. 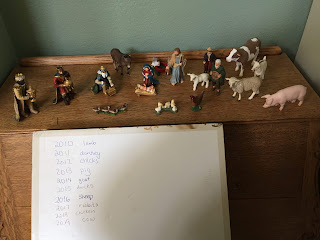 I've mentioned our Nativity tradition before, but I thought I'd show an update with more animals.  Each year, I buy a new animal for our nativity set, and we donate the same animal to a family in need through World Vision. 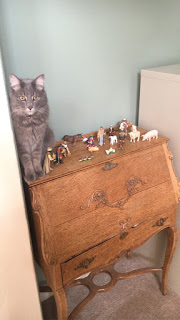 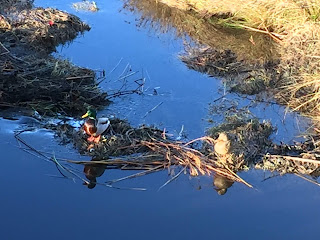 While we're talking about animals, I saw these ducks on one of my walks recently. 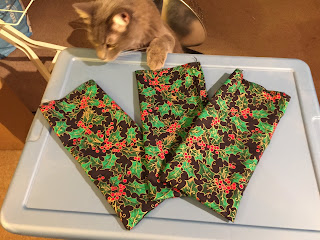 We use fabric gift bags at Christmas instead of wrapping paper.  Well, over the years, as we've added more people to our family, I occasionally need to make a few more bags.  I'm blessed to have been given a lot of Christmas fabrics over the years, so I was even able to pick black fabric to go with the black thread already in my serger.  These little bags were made specifically to hold gift cards. 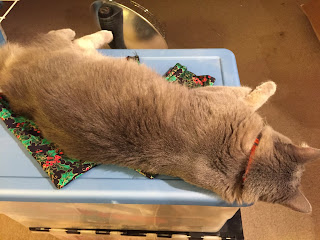 My cat is kind of a jerk. 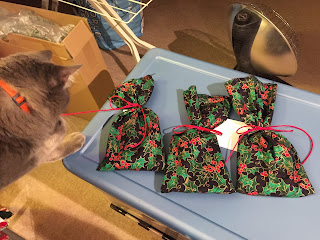 Gifts wrapped.  I also added reusable name tags a couple years back.  I printed gift tags onto card stock, filled in 3 for each kid, and laminated the whole batch.  Less waste. 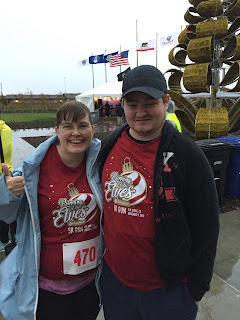 This was a miserable failure of a race.  First, it was raining.  Second, we parked a MILE from the start line.  Third, the race started at 4 pm.  In December.  In the rain.  (Photo above was taken when we got there, so it wasn't dark yet, but by the time we started, it was dark.)  We were only a few blocks in when I turned to Eli and Josiah and said, "This really sucks."  They were over it, too, as we sloshed along with water in our shoes, in soaking wet clothes, so we called it quits.  Actually, my race timing app says we did a whole 5K, if you count the walk to and from the car, but we didn't do the 5K the race organizers planned out.  As we drove home, the thunder and lightning started.  I decided I'm not a die hard fitness fan, but a fair weather walker.  I won't be doing a rainy race again. 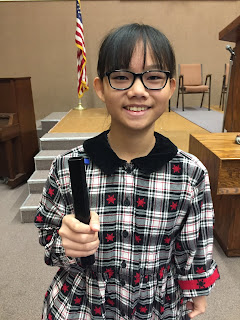 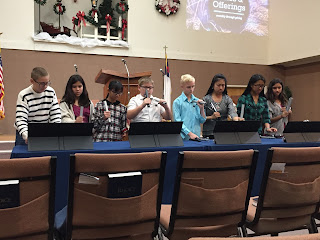 I think this is most of the middle schoolers. 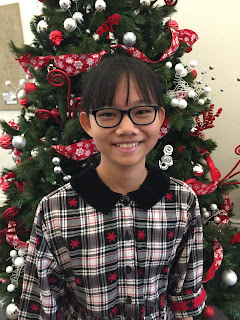 Merry Christmas, everyone!  Best wishes for a healthy and purposeful New Year!