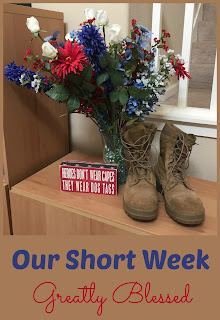 I borrowed a pair of Eli's boots for this picture.
The downside of last week's blog post being almost 2 weeks worth of stuff is that this week I don't have any school pictures to share. 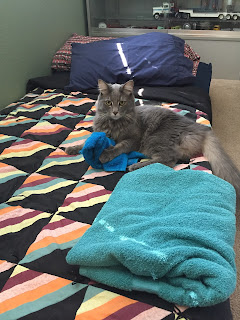 I put a couple of clean towels on Eli's bed, and Grumman promptly attacked them.  Oh Grumman. 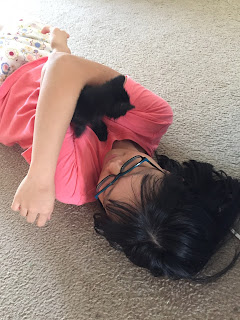 The foster kittens are an endless source of amusement. 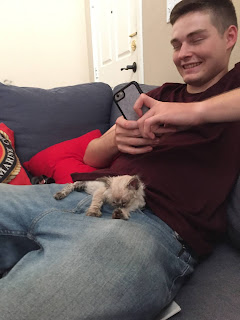 Eli hung out with Bertie while we played a meme game. 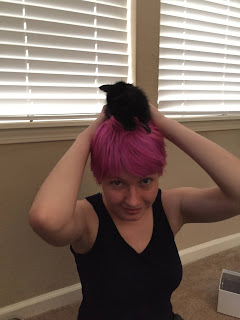 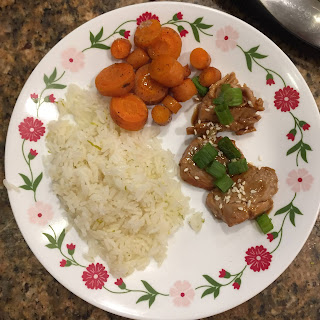 I learned some new meals with Hello Fresh, which was the goal, but I'm ready to cancel now.  This was the Korean pork bulgogi and lime rice. 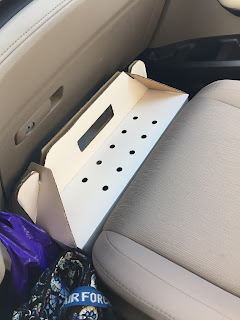 I had *quite* the adventure with Grumman.  Our city does a free drive through pet vaccination clinic twice a year--in fact, Eli and Miss Adorable have volunteered at it in years past.
Grumman was due for a rabies shot, so I thought we'd give it a try and skip the $170 vet bill this year.
I asked for a helper, but no one wanted to come with me.  [insert foreboding music here]
I put Grumman's harness on him, took him out in the back yard to munch on a weed or two before bringing him in to stuff him in The Box.  I'm still sporting a scratch from that.  He starts howling and thrashing, as soon as the box closes.  I put the box in the van, and scoot the seat all the way forward to keep it stable.
The clinic was set to run 9-12.  I got there at 8:32.  There were at least 30 cars ahead of me.
The line snaked back and forth through the parking lot, Grumman was swearing at me in cat language, and right after we finally got up to the part where they give you a clipboard, he managed to open the box and get out while I was filling out paperwork.
Super grateful I had the harness and leash on him. 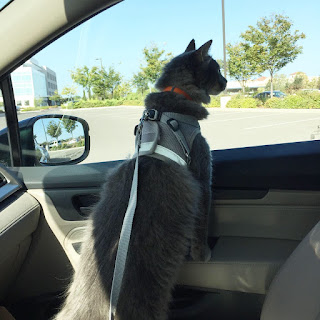 Once he was out of the box, he stopped howling and cursing.  All things considered, he did pretty well with the stop, roll, stop, roll part of the wait.  He looked around for a bit, and then lay on the seat.  (I wouldn't let him go in the back, because I wanted the vet tech to be able to reach him when the time came.)
All the other cats were in carriers, and the volunteers would take them from the car into a tent, zip it closed, administer the shot, put the cat back in the carrier, and put the carrier back in the car.
Grumman got his shot in our car, like they do for dogs.  He didn't flinch, yowl, bite, or scratch, which I was pretty impressed with.
After his injection, I looped the leash around the front passenger armrest and let him explore the back a little, while I pulled over to get out of the way and consider my options.
I knew I couldn't get him back in the box from inside the car.  And I knew that getting out of the car meant risking him escaping altogether. 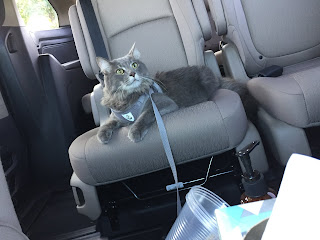 About this time, he plopped on Hannah's seat.  I cautiously rolled forward in the parking lot.  He stayed put.  To make a long story slightly less long, he stayed there all the way home.  I drove with one hand on the arm rest, securing the leash, just in case.  I was exhausted when I got him in the house again, and promptly popped on Amazon to order him a real cat carrier.  Really glad I don't have to do shots again for 2 years. 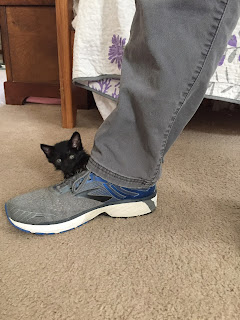 Paul's not really a fan of me fostering animals, but the kittens are very curious about him, and were playing with his shoes and climbing his pant leg. 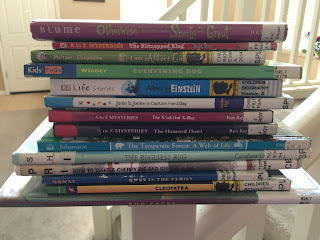 We made a couple of pickups at the library, of course.  Our curriculum has an extensive suggested reading list, so we always have 60 books on hold.  Any time we pick up new books, I come home and add more. 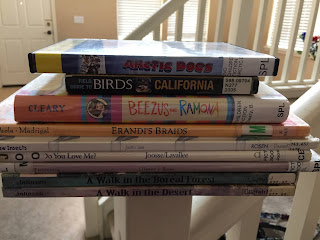 Summer reading program must have gone well for them this year, because they're doing an autumn version.  The kids will each get a free book, so that's cool. 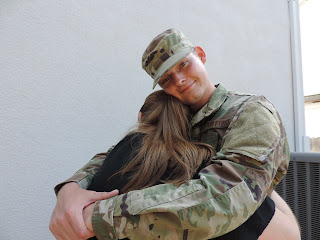 Miss Adorable and I talked Eli into a little photo shoot in uniform, but he did not want them online.  I explained that this was a picture of me, so I could share it.  He just rolled his eyes at me.  He's going to be overseas for a long time, so I wanted some fresh pictures while I have the chance.
Next week, we'll be wrapping up Canada and then starting Brazil.  The printer went psycho when I asked it to print 2 sheets of writing paper with Brazilian flags around the border.  We got 9 pages--some of them were even double sided.  So I told the girls we'd just have to do extra writing!  They were Not Amused.  I was kidding.  I'll just have them use the Brazil paper for any writing or copywork they do while we're learning about Brazil.  Good thing we'll be working on that country for 3 weeks, instead of the 2 we've spent on the US, Mexico, and Canada.
at September 19, 2020