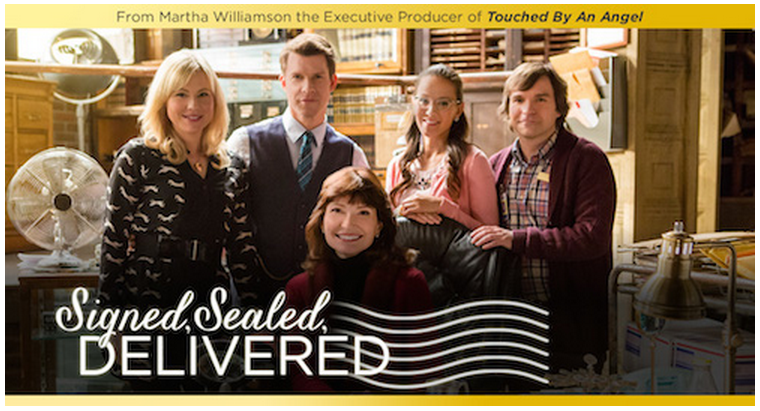 I got the coolest opportunity!  I kind of have to laugh, because, we don't watch "TV" in our house.  We don't even have cable.  But I got the chance to preview an episode of the new show, Signed, Sealed, Delivered.  This show comes from Executive Producer Martha Williamson, who created the hit show, Touched By An Angel.

I have to confess,  I cried.  The kids tease me because I cry at everything, but come on!  Some things just have that effect on people, right?  Shows from the Hallmark Channel usually have at least a 2 Kleenex rating for me.

I don't want to spoil it for you, but it was a very sweet show, and just the one episode I watched made me want to go right out and get the season pass on iTunes, so I can see the rest.  Postal workers make unlikely detectives, so it's a fun variation from what I typically watch.


Signed, Sealed, Delivered  The new original series "Signed, Sealed, Delivered" is a wonderful combination of romance, comedy and drama that follows the lives of four postal detectives who transform themselves into a team of detectives to track down intended recipients of undeliverable mail. Their missions take them out of the office where redirected letters and packages can save lives, solve crimes, reunite old loves and change futures by arriving late but somehow always on time. The team includes charming Oliver O’Toole (Eric Mabius), the group's leader is a man of faith who prayerfully approaches his work with the goal of making a difference in people's lives; new team member, Shane McInerney (Kristin Booth), a technophile who brings 21st century sensibility to the group; free-spirited, “girl next door” Rita Haywith (Crystal Lowe) who has a photographic memory; and lovable Norman Dorman (Geoff Gustafson), a master in conventional research methods. The show aires SUNDAYS, 8/7c on Hallmark

I liked it.  It was wholesome family broadcasting, which is hard to find these days.

Email ThisBlogThis!Share to TwitterShare to FacebookShare to Pinterest
Labels: review