Learning About The Western United States With Hewitt Homeschooling 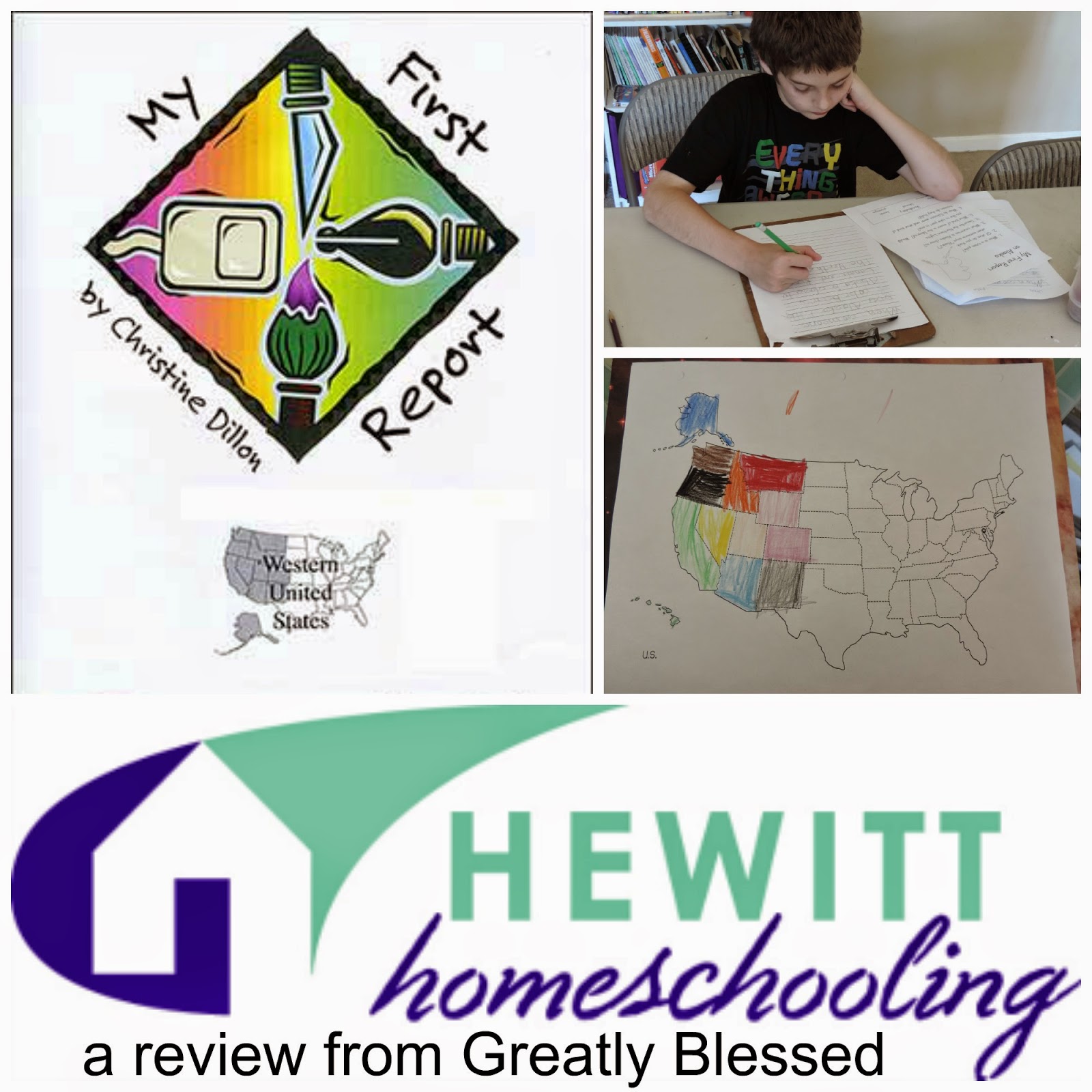 Have you ever seen something in a homeschool catalog, thought it would be great, ordered it, and had it arrive, only to realize it wasn't what you expected?

Our family was selected to review Western United States from Hewitt Homeschooling.  When it arrived, something tickled the back of my mind, and I went to the Misfit Curriculum Shelf (admit it, you have one, too) and found...  not one, not two, but THREE other units in the My First Report series from Hewitt!  Totally unused.  Given the titles, I'm guessing I purchased these close to a decade ago, when Sam was obsessed with dolphins and sharks.

So I got a good chuckle out of that discovery and set about learning what the My First Report series is all about.

Different from a fill in the blanks workbook, where kids read and regurgitate answers, this series helps you teach kids how to look for those answers from other sources.  The packet includes a page of suggested resources, some of which we already had in our home library.  There's no "assigned" reading, only questions to investigate and facts listed to guide you in further pursuit of learning about your topic.

For example, Wyoming's report page states that Wyoming was the first territory or state to allow women the right to vote, and it lists the year that happened.  Interested families could decide to research and find out when other states granted women the vote, read about women's suffrage, or be assigned a persuasive paper or speech telling why women should or should not be allowed to vote.  Or, you could read that fact and move along to something else on the list that you find more interesting and research that instead.  Think of Hewitt's My First Report series as a springboard for all sorts of fascinating "bird walk" learning adventures. 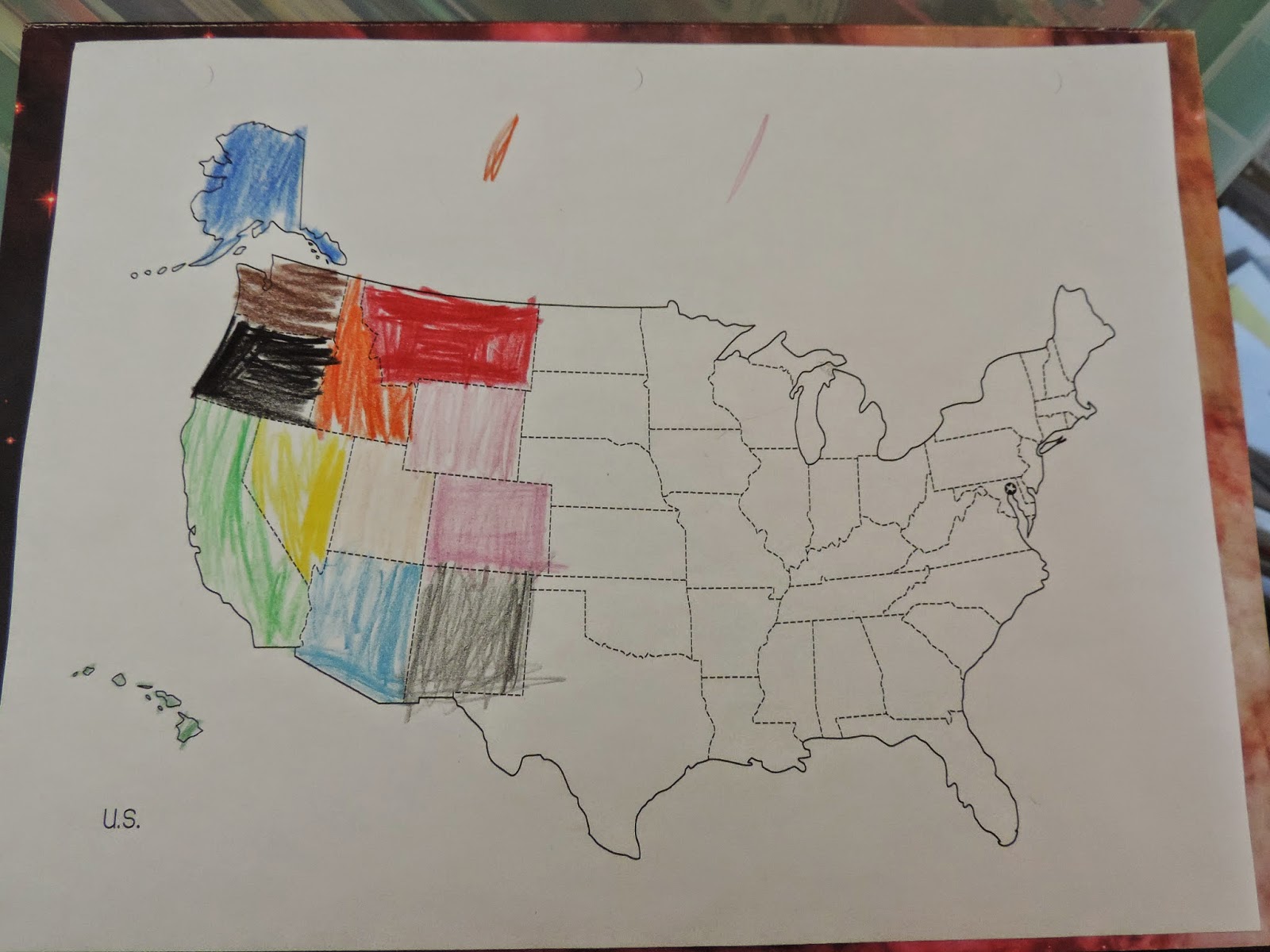 The states covered in the Western United States report packet are:  Montana, Wyoming, Colorado, New Mexico, Arizona, Idaho, Utah, Nevada, Washington, Oregon, California, Alaska, and Hawaii.  Since we had just come back from a trip to Nevada, we started out our learning there. 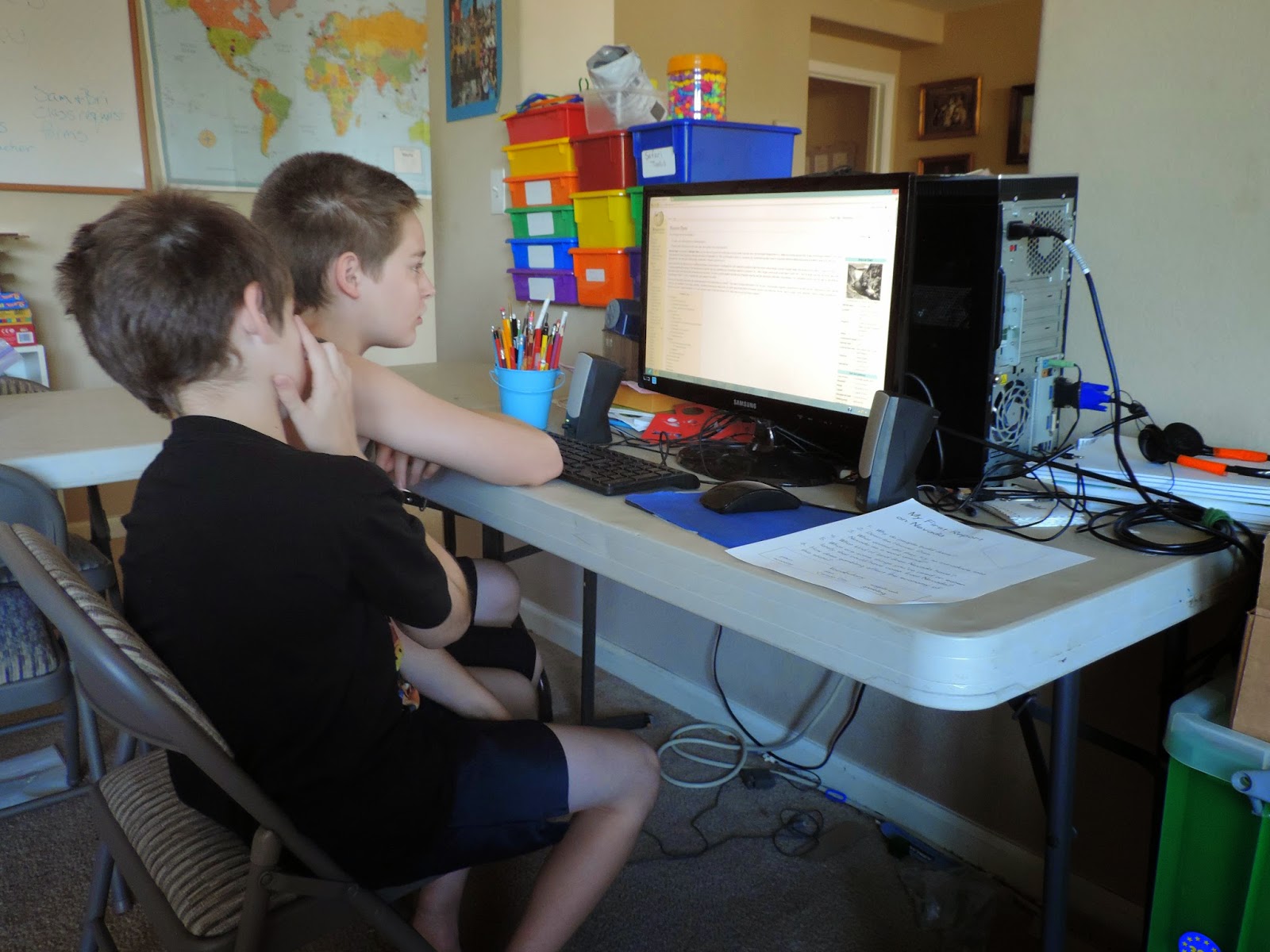 I asked Eli to help Jack in looking up information on the computer.  They ended up watching several videos about the mine that we'd visited, that we wouldn't have found if we hadn't been researching. 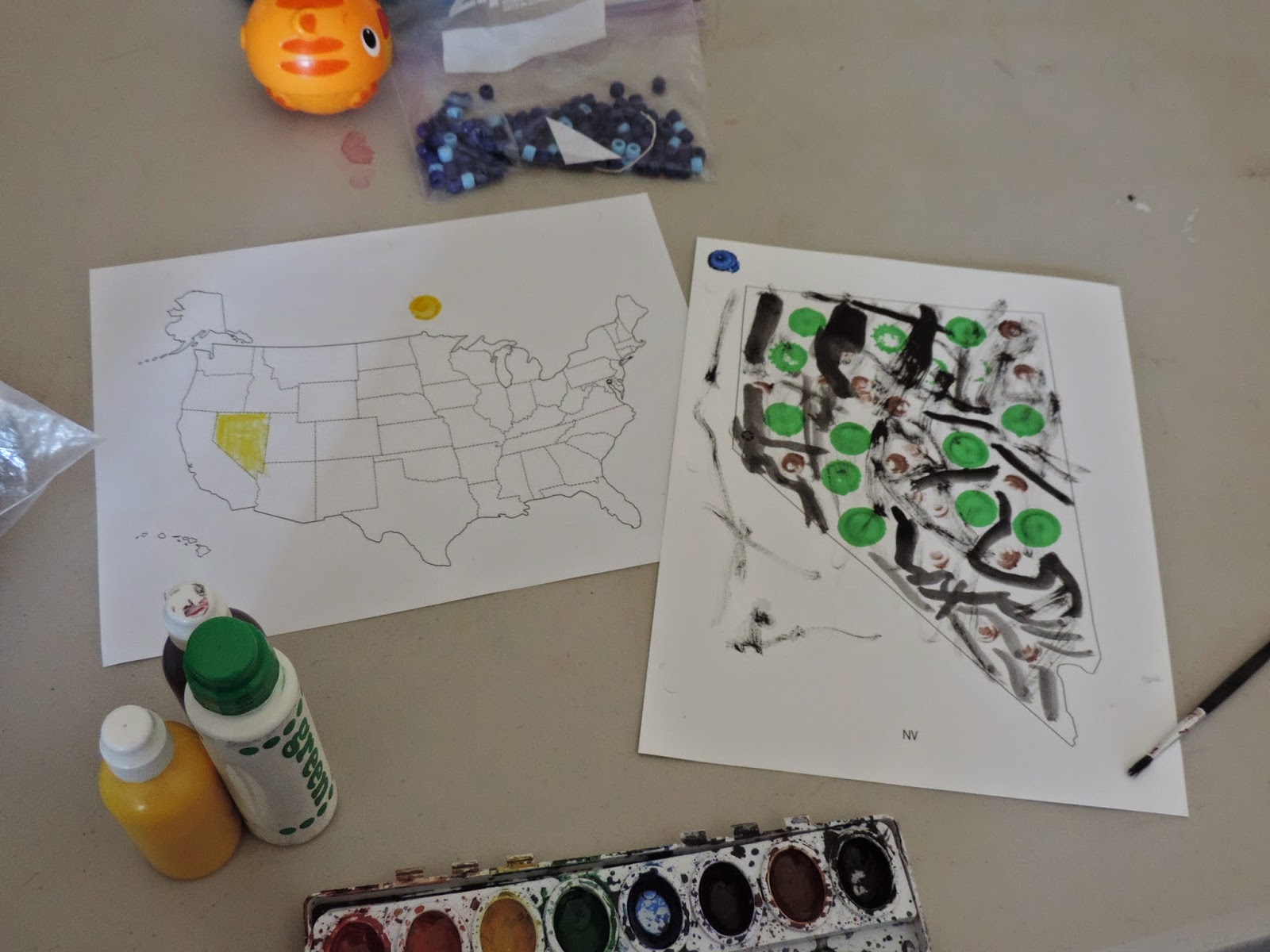 The packet includes both a US map and individual maps for each of the featured states.  Although these packets are designed to be consumable, I photocopied the state map onto cardstock so he could use paint on it without soaking through.  Jack's Nevada map art was... interesting, but I mainly wanted him to be familiar with the shape of the state, so I didn't say anything.  He also colored in Nevada on the US map. 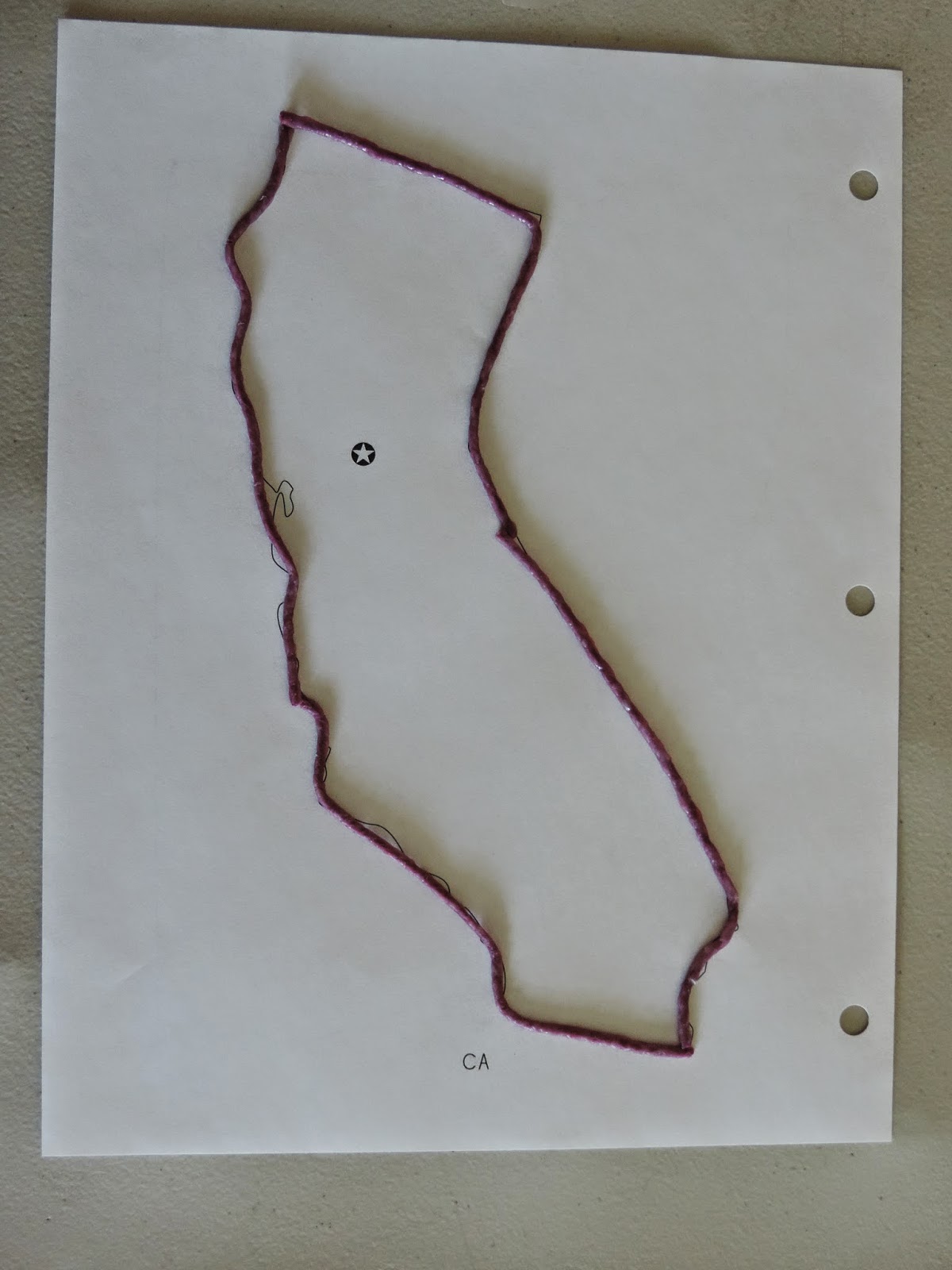 For some of our other states, I had him use wikki stix (basically string coated with wax) to outline the state.  Really working on reinforcing the shape of each state. 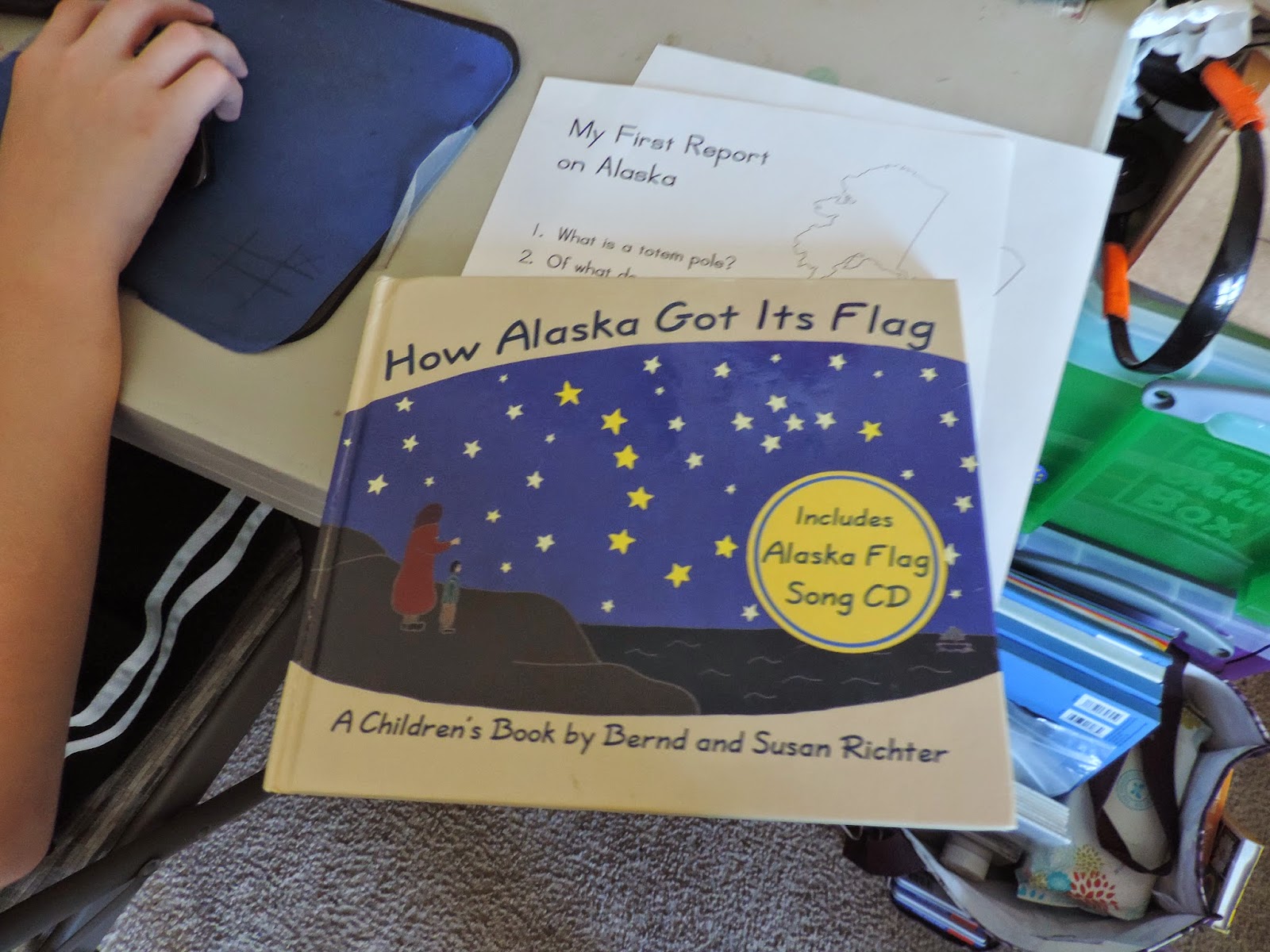 For his next report, he chose Alaska.  My mom had brought the book How Alaska Got Its Flag

back from a cruise she took several years ago, so I read it to him. 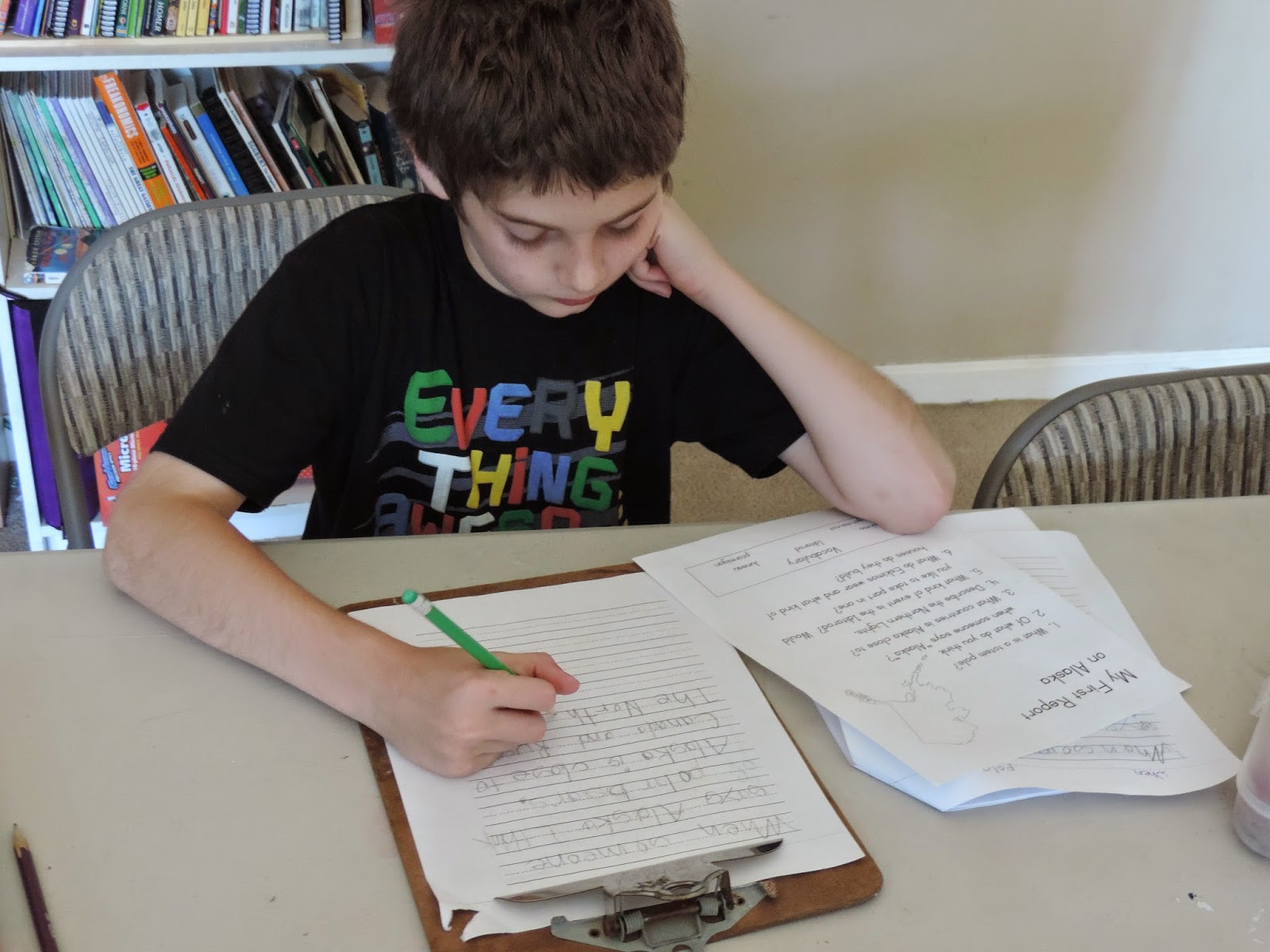 It was while using Hewitt Homeschooling's study that I realized just how little I've been expecting of Jack.  He had no real concept of what a report was or how to do one.  For each state, Hewitt offers a list of questions to get you started, and a page of facts about the state.  Just getting him to research the questions and answer them in complete sentences and correct his spelling and capitalization errors was a stretch for both of us.  I've really done him a disservice in allowing him to the be "baby" for so long.

I'm glad we did this review, because it pushed us to work on new skills in a guided manner.  Hewitt's My First Reports series was created for 1st through 4th graders, but it's also good remedial work for older students.  Jack will be a 5th grader next month, and this is a good way for him to pick up skills that he has missed.

There are currently 14 different packets to choose from, and they sell for $8.95 each, or $69.95 for the entire set.  Each packet has at least 12 topics for your student to research, as well as suggestions for report skills you can teach and several pages of unit study expanding ideas in the areas of art, music, language, reading, math, social studies, science, health, P.E., Bible, and field trips.

Although we did this during the summer, Hewitt's My First Report would be easy to add to our typical school week.  You could organize it so that you define the vocabulary words on Monday, research the questions on Tuesday, do a unit study activity on Wednesday (and maybe Friday, too, if you schedule school on Fridays), and write the final report on Thursday.  In this manner, a packet would last 3 months, if not longer, depending on how many rabbit trails you decide to follow.

The pages in the consumable packet come already hole punched, which makes it easy to pop them in a binder or a report folder.  It also comes with reproducible "story paper" of various line heights, so your kids can draw a picture and write about it underneath, as well as fully lined pages.

Thanks to this review, I've discovered a treasure on my own shelf!  I plan to add Marine Life to our studies in the coming school year, and depending on how long we spend on that packet, we may be able to finish Birds and Plants as well, all from something I'd written off years ago, because it wasn't what I thought it was going to be when I ordered it.