A Word On Current Events 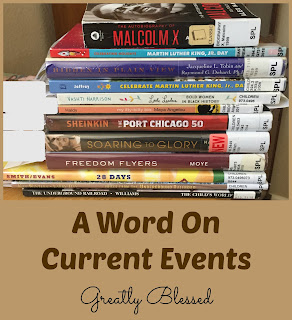 Two things happened at the end of May/beginning of June.  The story of the death of George Floyd went viral, and one of the libraries in town opened for curbside pickup.

Here's my facebook post from 6/2:  "I don’t consider myself a feminist, but I can acknowledge that I benefit from the work of feminists that came before me. In the same way, while I don’t consider myself a racist, I can acknowledge that I am part of the privileged class in the race situation. Instead of sharing divisive memes, or opining on a subject I’m not qualified to discuss, I’m taking this opportunity to learn more. I’m listening to Black voices as I sew. I’m reading Hidden Figures, which has been sitting on my nightstand for way too long. And I’m watching America’s Long Struggle Against Racism (Great Courses +) to better understand how we, as a nation, got here.

There’s a saying in the adoption world, “Hurting people hurt people.” We can easily understand the trauma that kids from hard places have, and why it makes them act out. We understand that an orphanage is less than ideal for babies and children. Can we not also admit that the Black experience in the United States today is also less than ideal and extend them the same grace?"

I'm realizing that I have a long way to go.  True confession?  In 19 years of homeschooling, we never did anything for Black History Month.  My excuse is the epitome of white privilege:  That doesn't really apply to us.  I'm sorry.

So now we're learning.  I put 46 books on hold, covering the Tuskegee Airmen, the Underground Railroad, the Civil Rights Movement, and a variety of other Black History topics.  The first 12 books are here.  Jack, Hannah, Katie, and I are reading and absorbing.

As a mom, I feel for moms (of all races) who are raising Black children, and especially Black sons.  I have 3 sons serving in the military, but I don't fear for their lives every time they leave the house.  I can't even imagine.

As Maya Angelo says, "When we know better, we do better."  Let's take this time to get to know.  To learn and understand better.  So we can do better. 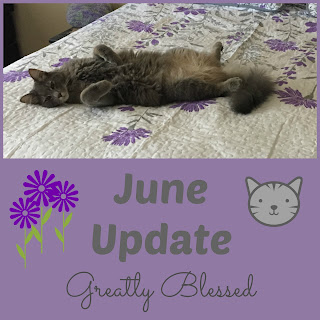 June.  Did we really think that 2020 would still be such a disaster in June?  I know I didn't.  Crazy.  Much like Grumman here, we've been doing a lot of laying around. 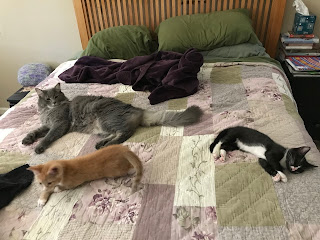 I'm really pleased with how well Grumman eventually came around to the foster kittens.  Gives me hope that maybe next time will go even better.  I'm secretly hoping to eventually find him a sibling.  I think I want another long haired cat.  I love Grummy's floof. 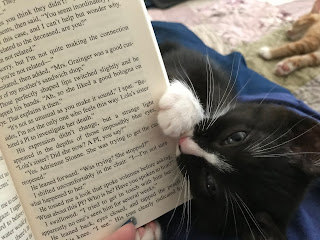 Murphy, chewing on the plot of a cozy mystery... ironically enough, this book has a black & white cat on the cover. 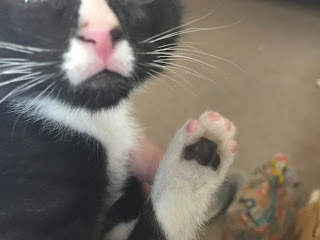 I fell in love with his Neapolitan paw pads, and his sweet purrsonality. 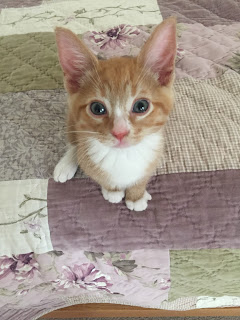 But all good things must come to an end, right?  Our foster kittens got big, and the time came for them to go back to SPCA for surgery and adoption. 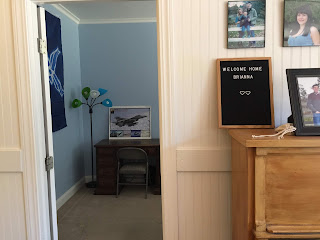 Eli's room got emptied out when he left in March.  We sort of restocked it a little to accommodate one of the adult children coming back home for a bit. 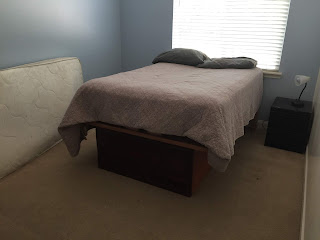 Paul built a bed, using a set of drawers we had in the garage.  I decided to donate my quilt to the guest room and update the bedspread in my room.  It's been almost 9 years. 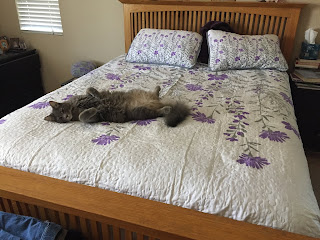 Grumman gets a little weirded out by change, but he wasted no time in making himself at home on the new bedspread, once it was finally on, which was no easy feat, due to his "help." 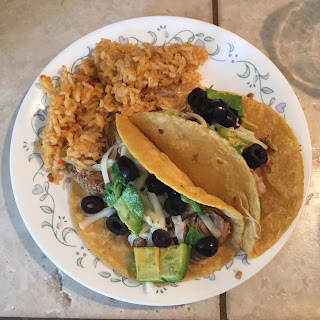 I've ventured out to a little healthy grocery store that requires masks, as I feel more comfortable there than our regular, high volume, masks optional, grocery store.  In doing so, of course, I've discovered a few new foods.  They have pre-marinated, boneless chicken thighs.  This was the second flavor we tried, Baja, and these lil tacos were uh-mazing.  I cooked the meat in the instant pot until it was fork shred-able, and then we put it on a jelly roll pan and toasted it a little in the oven on broil.  Yumalicious.  Honestly, I'm not much of a cook.  Paul cooks fairly often, and Josiah does dinner semi regularly.  I'm more of a "defrost" than a cook.  But I made a mixed grain thing recently that I really liked, too, so I'm feeling kind of inspired lately.  I also found a Mexican soup mix that I added chicken and black beans to that turned out pretty good. 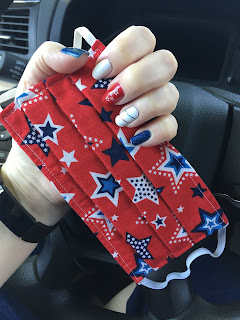 So, yeah.  This was my Memorial Day weekend coordinating mask & nails.  Actually, I didn't leave the house all weekend.  This was taken Tuesday, when I went to the dentist.  My March appointment got cancelled, and when they called to reschedule it, I decided to go ahead and go in, because I'd popped a crown off the week before.  Otherwise, I would have been fine waiting.  I was the very first patient in 6 weeks for my hygienist.  It was an interesting visit.  Some people are more germ conscious than others. 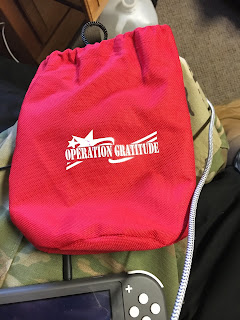 A few months ago, I had the kids at the school make paracord bracelets for Operation Gratitude.  Eli sent me this picture of the little pouch of goodies that he got right before getting on the plane to go from basic training to tech school.  Made me happy to see, in a roundabout way, the organization that we blessed, blessing another one of my boys.  (Sam got a package from them a couple years back, which is how I heard about them in the first place.)  I'd like to have the girls do letters to put into care packages. 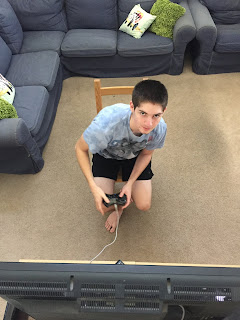 This pretty much sums up how Jack is spending his time.  Video games, Disney +, and peanut butter.  Aside from no school work, summer quarantine feels a lot like school year quarantine. 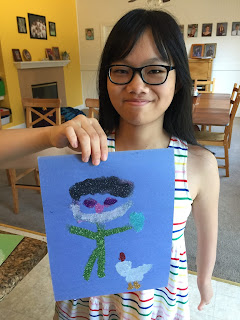 Josiah did an art project with the girls. 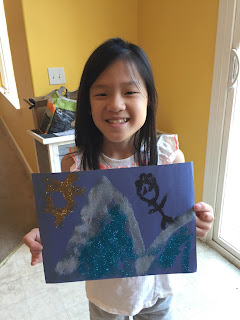 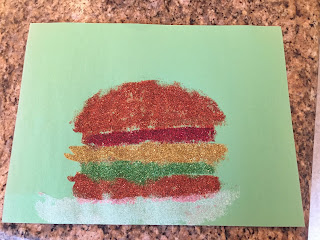 This was Josiah's hamburger.  Funny story.  After they were done, Josiah threw the glitter out the back door instead of pouring it into the trash.  Grumman likes to go out on the patio and roll a few times.  Let's just say, he had an extra sparkly personality that day. 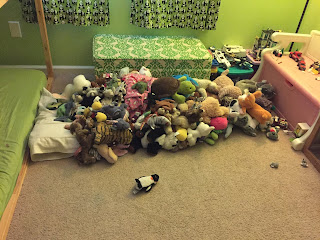 I was called into the girls' room, and greeted by a massive pile of stuffed animals. 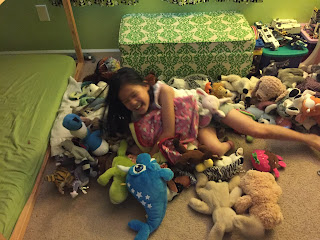 And then it moved! 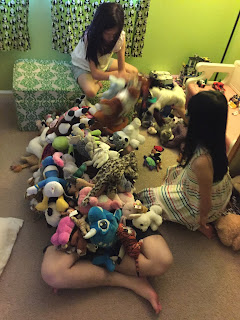 The girls thought this was hilarious, and proceeded to bury Josiah in animals, too.

I have more to share, but I better cut this off before it ends up being a mile long.  If you made it this far, whew!  :)  Stay safe out there.

The Heart of a Hero - book review 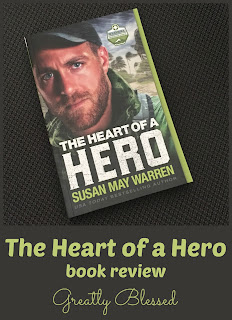 Reading offers an escape from the COVID-crazy, upside down-ness of the world around us right now.  If you're looking for that escape, might I suggest The Heart of a Hero, the latest release from Susan May Warren? 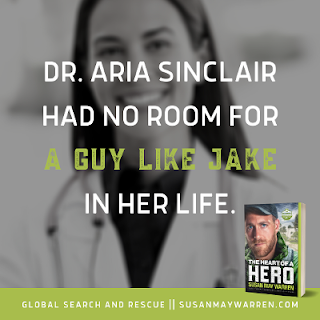 The Heart of a Hero takes you on a wild, heart-stopping adventure from the sailboat mishap beginning, to the "Omigosh, what happens next?" ending.  But the majority of the book is set in a hurricane.  I don't want to give too much away, but suffice it to say, this fast paced story is hard to set down. 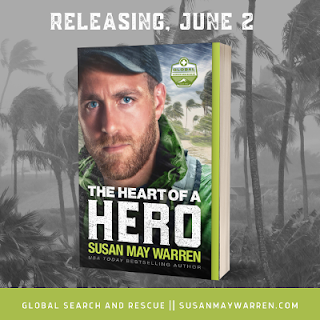 As usual with a Susan May Warren book, the cast of characters is varied and complex.  From main characters Jake and Aria, to the interesting supporting players like Aggie, a traumatized child whose father didn't know she existed, and a motley band of stragglers who shelter together out of necessity until the storm passes.

I like the way the author combines romance and adventure with plenty of factual "local color."  For example, I know nothing about sailing, but the vivid explanations of the sailing scene in the first chapter make it so much more real.  Bits of the story take place around the world, and she infuses so much reality into these that you can almost see the sun sparkle on the Mediterranean, or feel the cold of a perilous Alaskan rescue.

The Heart of a Hero is available on Amazon, Barnes & Noble, Christianbook, IndieBound, and Baker Book House.