Our Week - The Toddlers Have Gone 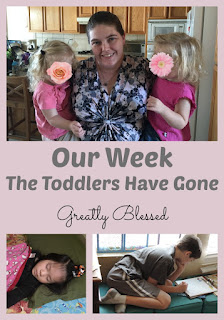 Several in our family have been fighting a cold this week.  I'm of the opinion that mothers of many should be exempt from illnesses, but apparently Mother Nature does not agree.

Despite my friend not being able to watch the Little Ones any more, we still made a stab at getting some school work done. 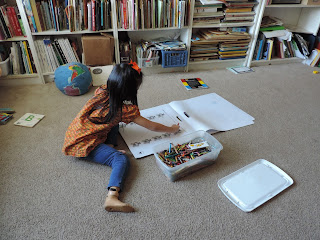 Katie is working in her big floor pad I Can Do Fun Activities from Fundanoodle.  Finding the animals that are exactly the same and matching them is a good pre-reading skill for learning to differentiate between similarly shaped letters. 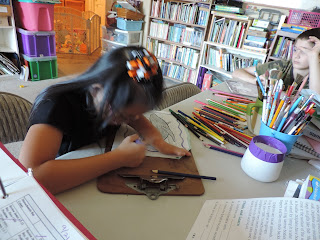 This week in science, we learned about dolphins and marsupials (mainly kangaroos and koalas).  We even watched a movie about animals on SmartKids Media. 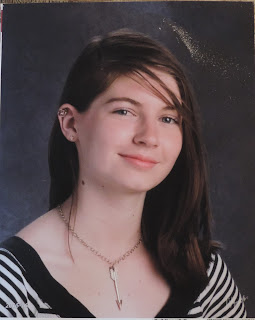 The teens got their school pictures back.  Brianna has decided to try for a re-take so she doesn't have her hair in her face. 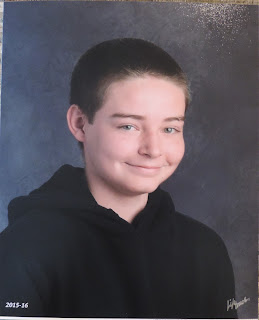 Eli's picture turned out nice.  He's enjoying his first year of classroom school.  --Maybe not all the classes, or all the teachers, or all the work, but he's enjoying the social aspect.  I often hear on weekends, "I'm bored.  I want to go back to school."

...And Sam hasn't managed to bring his pictures home from school yet. 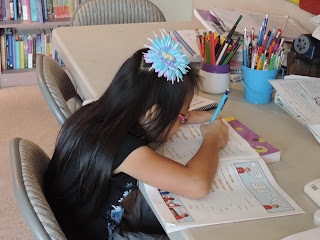 I'm getting ready to order another shipment of English paces for Hannah and Jack.  We've been without an English program for a couple years, figuring that the kids would pick things up through reading and writing, and I think that was a mistake.  Fortunately, I was able to have Jack take a placement test that shows where his gaps are, so we're able to backtrack and pick up things like homonyms that he hasn't absorbed through our previously relaxed approach. 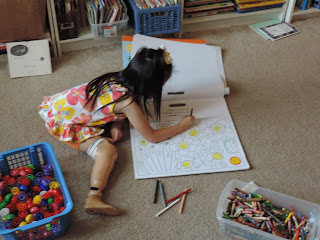 More Fundanoodle time for Miss Katie.  I had to explain the difference between "color" and "trace" again this week.  Her writing book and her Bible study pages require her to trace, so when the instructions asked her to "color the 9 circles yellow" she traced them instead. 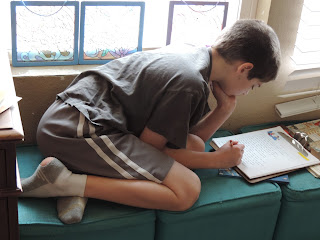 One of the beauties of homeschooling is accepting that learning doesn't have to happen in a desk.  Or only Monday-Friday. 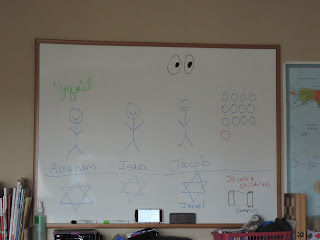 We recently started a new Bible curriculum!  I'm pretty excited for this one, since I scrapped the one that came with My Father's World after exactly one day.  (And no, I'm not teaching the children that Nyquil was available during Old Testament times.  The white board sometimes serves as a grocery list reminder.) 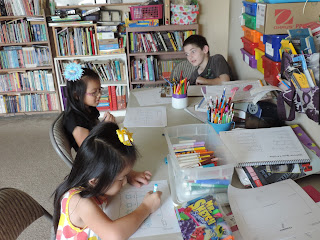 The best thing so far about this program is that all 3 kids can learn the same thing at the same time, but their worksheets are at different levels.  More info in an upcoming review. 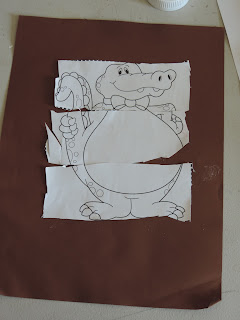 Katie had a huge break from "schoolwork" while the toddlers were here, so when I gave her a cutting practice worksheet, it was not surprising that her skills had deteriorated.  We'll have to work on that. 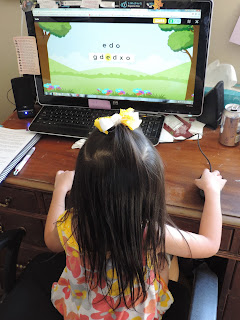 Katie and Jack continue to use Reading Kingdom.  If you missed my review, you can find it here. 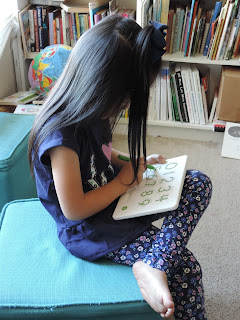 Yesterday, Katie had a world map placemat and said to me, "This one is like that one up there!" pointing to the world map on the wall of the school room.  I agreed told her they were both maps of our world.  She then started pointing out, "Norf America, Souf America..."

Having had such success with our beloved continent book, I decided it was time to move on to numbers.  I bought the number book and this interesting little toy I recently saw on another blog.  We'll work on counting and identifying numbers for a bit now. 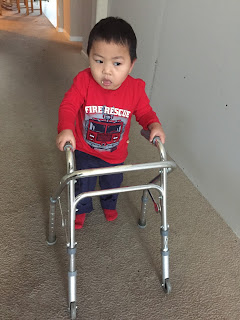 We have Hannah's old walker out for Lukey.  This photo is misleading, because you have to keep one hand on the crossbar in front of him, and one hand behind him when he's using it.  His inclination is to lean back and have you pull him along.  When he's in the right mood (and pointed at his high chair), he can make quite a go of it.  You have to guide the direction of the walker, though, as he's not "pointing" it at anything yet. 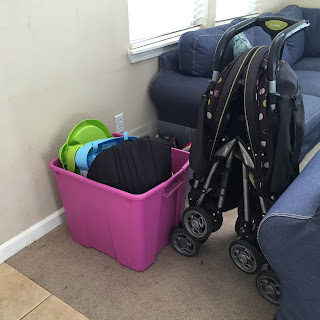 The Little Ones have gone.  Someone came to pick them up Thursday after naps. 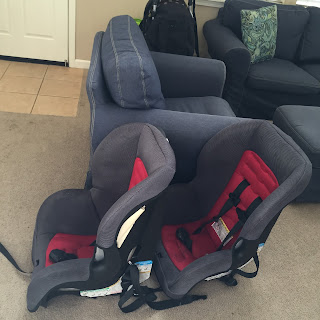 We're in recovery mode, putting the house back to the way it used to be, taking down extra equipment.  (Getting diapers out of my room, huzzah!) 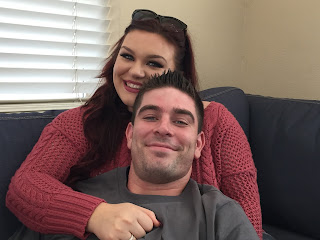 These guys came over to hang out and have dinner one night.  The kids love to play with Brayden. 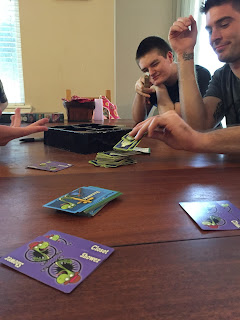 We ended up pulling out Snake Oil and Clue over the course of the evening.  (Josiah is threatening me with a rubber band gun.)

We're still working on Week 5, despite this being the 7th week of school, because with this cold, I was not able to do much reading aloud.  This worked out in the kids' favor, because they got to listen to an audio drama (review coming soon!) and do an art project.  As soon as I can read without coughing, we'll get on track again.