I Promise We Do More Than Just Art Projects 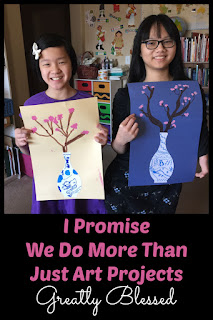 Not that you can tell from my posts lately.  But it's so much easier to take a picture of an art project than a picture of a discussion on the Russian Revolution, or of listening to Russian folk music, or watching Anastasia.  All things that we did this week, with nothing to really show for it.

I also did some (not mask!) sewing this week, but since the total project is only 1/4 finished, I'll show those when they're all done. 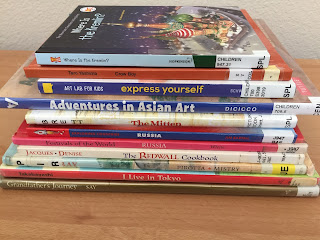 Happy to report our book flow is back to normal amounts again.  See the book Adventures in Asian Art?  That book inspired the vase project shown in our title image above. 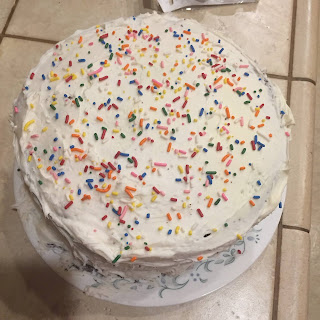 We had a birthday this week. 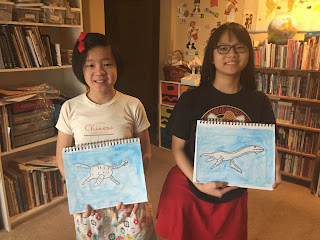 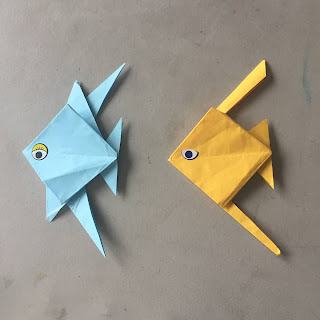 Origami fish that were harder than one would think. 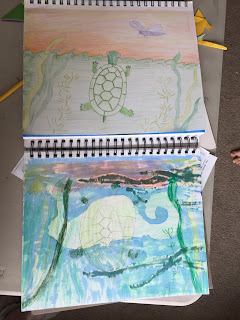 Unfortunately, I didn't get a picture of the turtles before Someone used marker on the backside of hers. 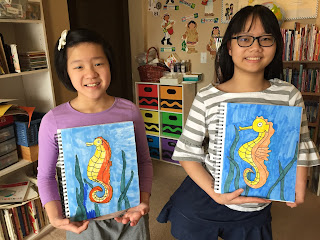 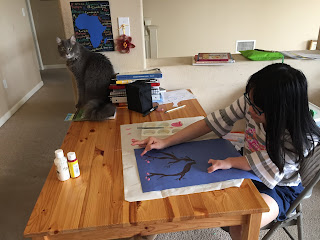 Our Asian vases project.  Notice Grumman the Curious.
I used Crikey to cut out a couple vases from white cardstock, and had the girls draw Asian designs on them in blue marker.  (Blue marker again.  We go through a lot of blue.)  Then they drew branches on their background paper, and finger painted cherry blossoms on the branches. 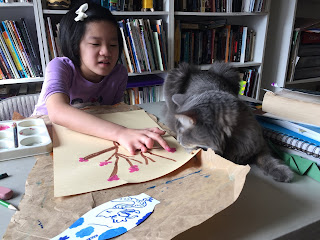 I'm kind of surprised that Grumman didn't end up pink in the process.  Afterwards, they glued the vases on. 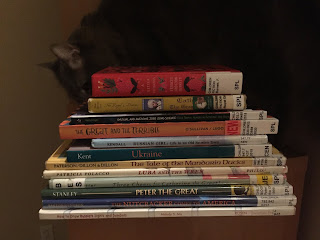 Grumman kind of likes to be right in the middle of whatever we're doing.  He's giving the new pile of books a sniff to see what sort of smells they have at the library. 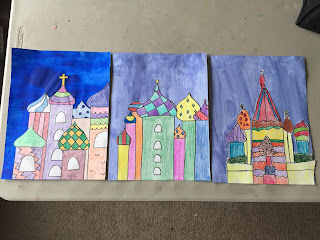 Our "St. Basil's Cathedral inspired" Russian buildings were from a video lesson on YouTube.  We really like the Home Art Studio DVDs, but I hadn't seen this one before, so I was glad to stumble across it.
I ended up throwing away the sticky blue acrylic paint I used for my background and having the girls do tempera paint for theirs.  Not really delighted with either option, honestly.  Many of our art supplies have been around for a long time and have degraded over the years.  The building part would have been fun to do in watercolor pencil, too. 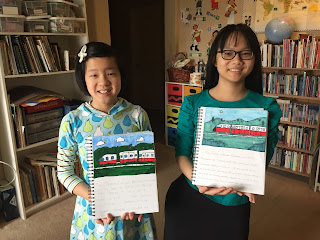 We watched a video about the Trans-Siberian Railway, the longest rail line in the world, so I had the girls jot down some facts about it with their train drawings. 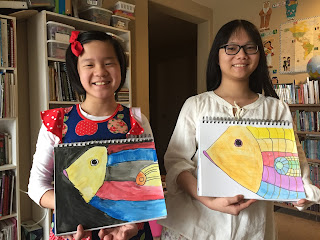 Swimming Creatures turned into a discussion of reproduction when Katie asked what fertilized meant.  The conversation leapt species from fish to humans, of course, and when Jack popped out of his room and realized there was elaborate Birds & Bees talk going on in the school room, he turned around and went right back in and shut the door. 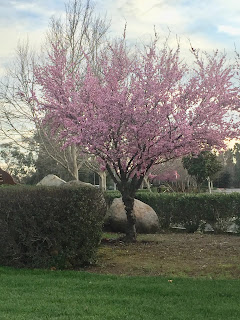 Signs of spring happening all over the place right now.  It's a welcome antidote to all the SNOW pictures I'm seeing on Facebook.  I don't like to be cold, so the sight of daffodils (one of my favorite flowers) is a huge encouragement to me.
at February 19, 2021