Our First Day of School Week 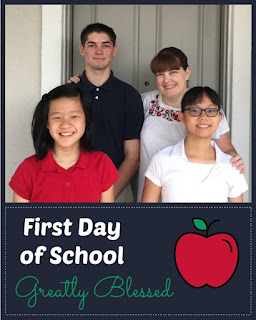 I know I skipped a week, but it's been busy around here!  Here are the highlights: 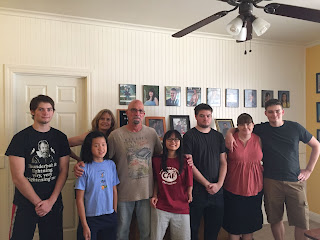 We had a visit from Grammy & Carl.  They made the drive up to see Eli while he is here.  We went out to lunch and then... 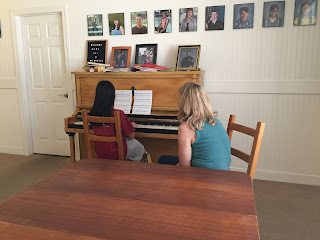 ...Hannah played a song for them on the piano. 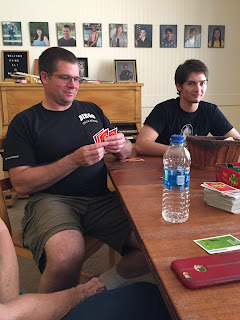 And we played Apples to Apples. 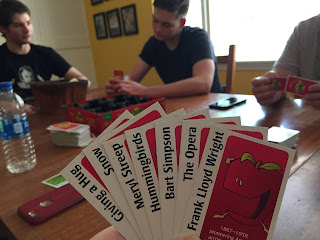 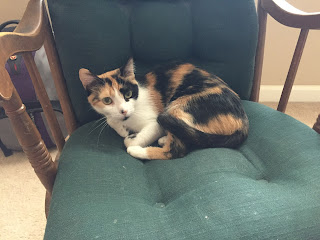 Poor Fi.  She's a decent cat, but Grumman is just not having it.  She wants to be where he is, and he wants nothing to do with her.  I often walk into my room to find him up on his perch, and her in the rocking chair, as that's about as close as he'll allow.  Eli's not a fan of her either; she peed in his duffle bag. 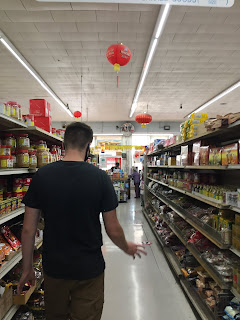 Speaking of Eli, this was taken while we were on a wild goose chase for his favorite Japanese canned coffees.  We went to 5 Asian markets before a google search confirmed that it's not sold in the US any more.  So he had to go with another brand.  He says he's going to use his household goods weight allowance to ship a pallet of the stuff to his next duty station. 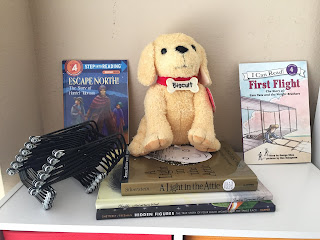 Donations are starting to trickle in from the library wish list! 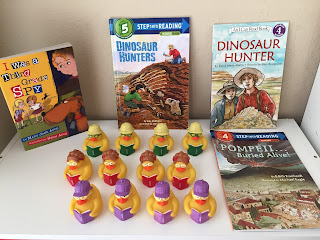 This makes me so happy!  Other people believe in my project! 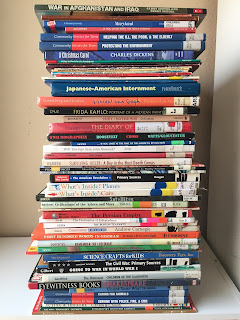 Before the pandemic, I was volunteering at Book Den.  They graciously allowed me to come pick out a box of books for the library.  I packed that box, lol.  They donated 85 books! 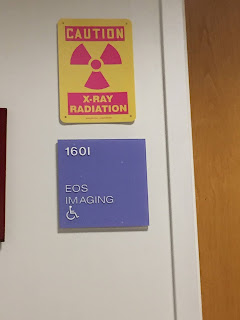 We had a 5+ hour visit to Shriners.  Katie had x-rays.  Looks like we'll be facing surgery soon, but I have yet to hear from the scheduler. 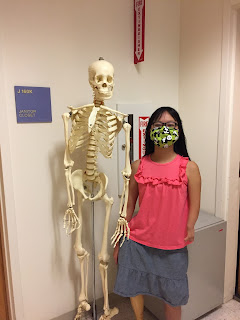 Hannah will be getting a new leg.  Katie's leg got lengthened a whopping 1.75"!!!  I made this appointment in April.  They hadn't been seen since February of 2020, and this was the soonest they could fit the girls in. 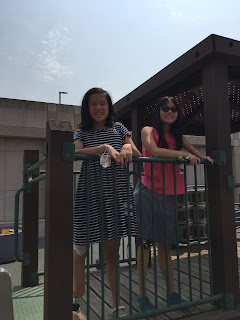 First we did x-rays, then we did "clinic," which was seeing the doctor and prosthetist downstairs.  Then we went upstairs and saw a prothetic tech, to lengthen Katie's leg and do some repairs on Hannah's.  Then we went to the cafeteria to pick up lunch while we waited for our regular prosthetist to be done with clinic.  The cafeteria is reasonably priced.  We got a plate with 2 pieces of fish, 2 hush puppies, and spicy rice, plus a soda and 2 juices for $8 something.  I had brought snack bars with us, just in case, so everybody got a drink and a bar, and we split the fish & rice.  Then the girls played in the sunshine on the rooftop playground. 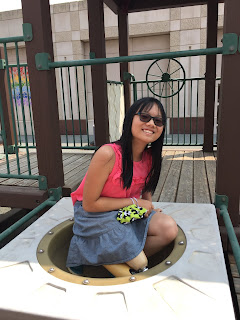 Hannah said, "Mom, don't you have a picture of me sitting in this?  Take another one!"  Last time, she actually fit in the half bubble. 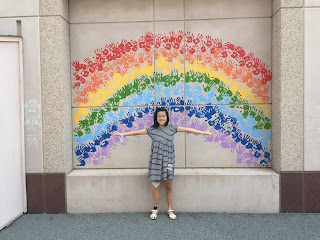 It felt good to be out in the sunshine.  The a/c is too cold in the exam rooms. 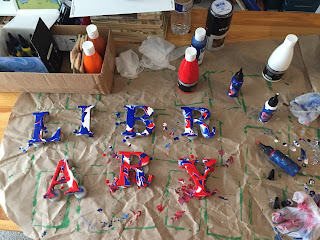 I finally got around to pouring paint on the smaller letters.  You can totally tell I did one row at a time.  The top is much more blue and the bottom is much more red. 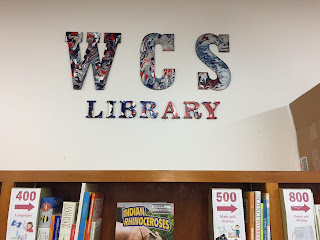 But it looks okay now that it's all up on the wall. 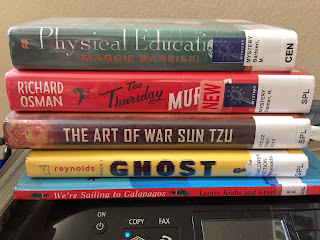 Books from the city library.  Jack is currently reading Art of War.  He's been sharing insights with us. 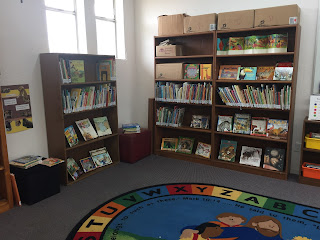 The picture book section has filled in quite a bit, and the rug has changed since you last saw this corner. 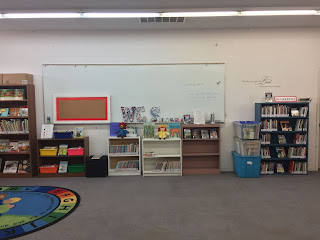 The abyss has disappeared.  I finally switched from trying to process all the books, to trying to hide the unprocessed books before school started.  And I brought in the 3 bookcases that are where the tables covered in books used to be.  The white ones have our early chapter books, and the pink one currently has a display of August Notable Events and books relating to those. 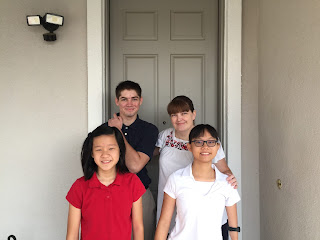 I decided to get in the Back to School picture this year.  Paul took these for me. 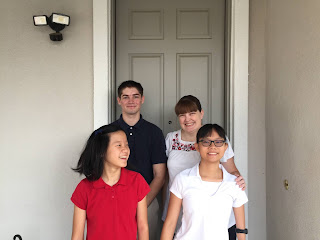 6th grade, 9th grade, 12th grade, and library.  I am a little concerned with how the transition will go for the girls.  Socially, they lost an important year.  When they were in school before, Katie was a 4th grader--now she's a Middle Schooler.  That's a big leap.  When they were in school before, Hannah was a 7th grader, now she's in High School.  That's also a big leap.  They've been At Home for over a year, whereas their classmates mostly continued attending school.  I feel funny even saying this, as a homeschooler at heart, but there's a certain amount of social peer pressure that helps them understand what normal behavior looks like.  They've missed 15 months of developing those cues.  Hopefully, they'll do just fine, and I worry for nothing. 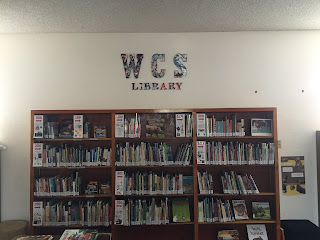 I was *delighted* to have someone offer to put these up for me.  I'm very happy with how it looks. 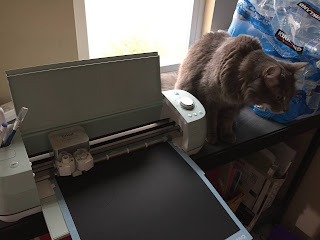 This is Grumman supervising me Crikey-ing up 30 black dogs (art project) and some bulletin board pieces. 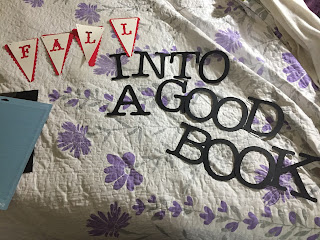 Sneak peek at my October/November board.  I bought an autumn garland from Hobby Lobby to go with it. 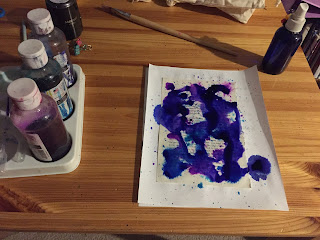 This is step one of an art project I'm going to do with the students this week.  I really love how the finished creation turned out.  I'll share those with you next time.
Very excited to get students IN the library this coming week.  I've been working with the books and the catalog and the decor for so long, it's time to shift my focus to the library's patrons!  I'm very excited to see kids start checking out books!
at August 22, 2021