Clubfoot Basics: Life with an AFO 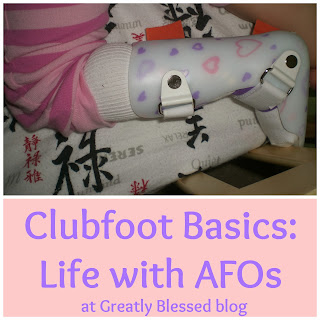 One of the searches that recently landed someone here on my blog was for "AFOs pruney skin."  While that totally cracked me up, it made me realize that I would like to do another installment in my Clubfoot Basics series.  You can read Cast Change Day and Life With A Cast and Let's Talk Clubfoot if you missed those.

While most of the time, I don't even think about Katie's AFO (we call it a brace), there are a couple things that I would share with someone considering adopting a child with this special need.

Katie was fitted for a day brace and a night brace at Shriners between her last full-length cast and her little boot cast (to hold the foot in place while we waited for the AFOs to be made).  She wears her day brace from the time I get her up in the morning, until she gets into PJs at night.  She wears her night brace when she's in pajamas.  The only time she's not in a brace is when she is in the bathtub.

Our first challenge was that the velcro on the brace had been trimmed close.  I understand why.  It's so that it doesn't stick out and catch on everything.  However, it makes it hard to un-velcro them.  The second day she had them, I went to my sewing room and found some spare velcro loop to stick to the ends of the hook part to create little "tabs" we could use to pull open the velcro.

Our next issue was finding socks that worked under the AFO.  I had no idea that toddler sized knee high socks were so scarce.  I found BabyLegs Organic Knee-High 2 Pack Socks, Looking Glass, 2-4T

on Amazon, but I have a hard time paying $5 bucks a pair for baby socks.  What I eventually settled on were the Old Navy triple roll toddler socks.  Right now, you can get 8 pairs for $10.  They fit well, they come in every color, and they go up to the knee when not rolled.  My only issue with them is that the words on the bottom leave an imprint on her feet if you accidentally put one on inside out.  And that's easy to avoid.  They have a high cotton content, and we haven't had too much of a sweaty feet issue yet, so sorry "pruney feet AFOs," I don't have any great advice for you there yet.  (Assuming you are using cotton socks?  Maybe go thicker on the cotton socks?  Ask your prosthetist to drill in some air vents?)

One ongoing consideration is clothing.  I think any limb difference beyond just fingers or toes is going to have it's clothing issues.  We certainly have had our challenges dressing Hannah, who wears a full above knee prosthetic leg and has one short arm.  Katie has a knee height prosthetic leg on one side, and her AFO on the other side.  Let's just say, that makes for some lumpy leggings.  I tend to reach for wider legged pants for her.  (Hannah can't wear girls jeans at all.)  I've recently decided to stop struggling with pajamas with cuffs at the bottom and only put her in uncuffed PJ pants.  I found some on zulily.com for her Christmas Eve jammies, and she's got a few pairs of hand me down flannel PJ pants that I made for Hannah.

Shoes are a common struggle for people in orthotics, and especially for those who only wear an AFO on one side.  The brace can require a shoe that is a size or more larger than the unbraced foot.  Here, at last, we have an advantage, in that, next time Katie gets a new foot, we can have it made to be the same size as her AFO, not the same size as her actual flesh foot, so she'll be able to wear shoes by the pair at that point.  What we are currently doing is buying two pairs of shoes, a 7 and a 9, and wearing one of each.  As an aside, I recently bought Katie black tennies and brown tennies.  4 pairs of shoes, which is only 2 "pairs" for her.  However, they were only $6.99/pair, and after Katie is done with them, little Lukey will be able to wear all 4 pairs.  So, in my mind, it's 6 pairs of shoes (2 pr for Katie, 4 pr for Luke), which works out to $4.66/pair.  I can live with that.

Something I didn't expect was that when Katie is in bed, she will kick the wall with her brace, which is louder than your barefoot thump.  Since my bedroom is on the other side of that wall, I've moved her bed about a foot away from the wall, so she can't quite reach it now.

All in all, clubfoot has been a very manageable special need for us.  There's a flurry of appointments in the beginning, but it tapers off after the casting.  It was a huge blessing to us that Katie did not need surgery after casting, but we were prepared for that as a likely scenario.  If we were to adopt again (which I totally cannot see us doing at this point) club foot, either unilateral or bilateral would absolutely be a special need we would consider. 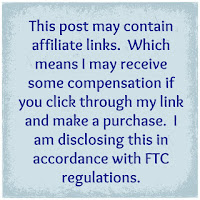