Moving Beyond The Page 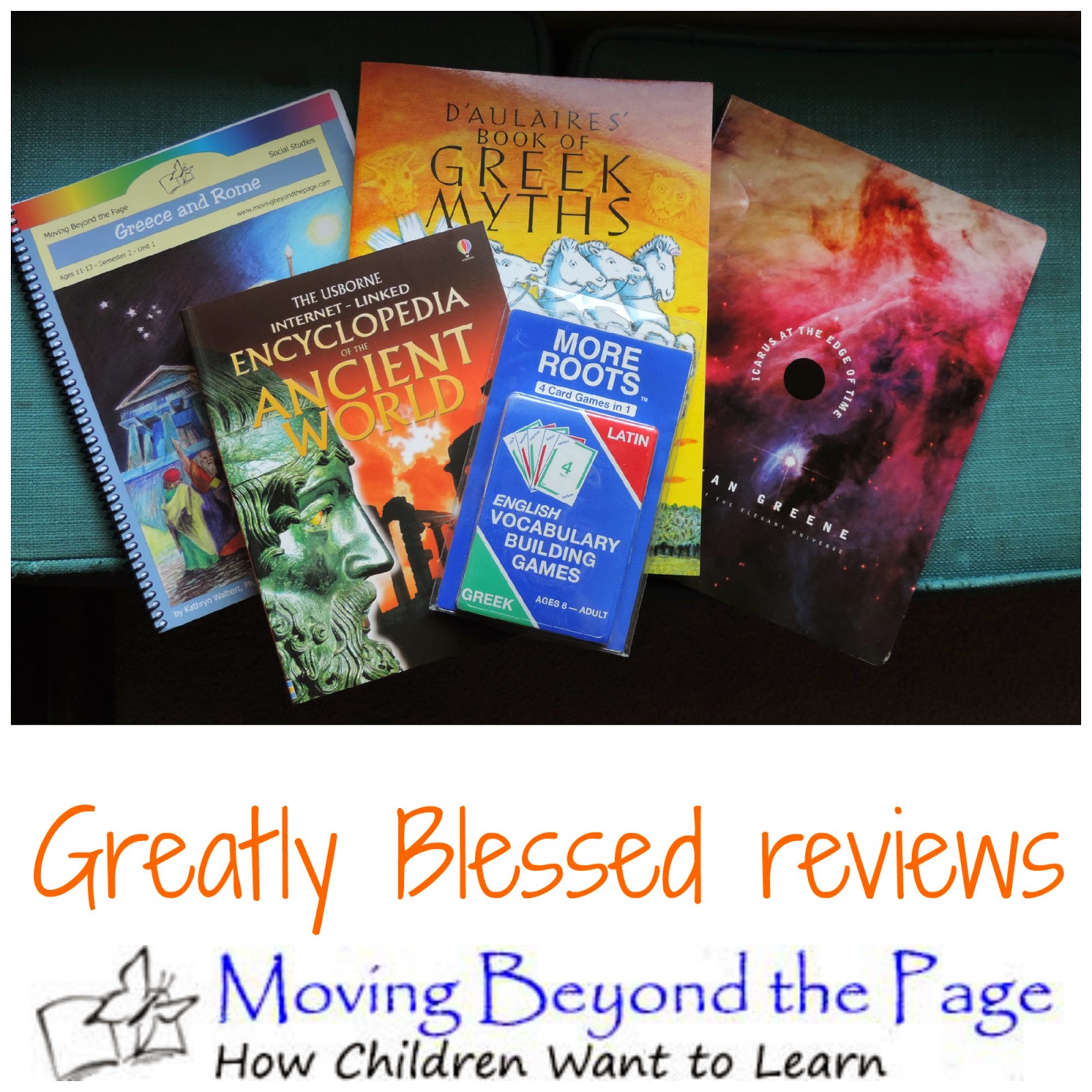 Our family was asked to review for Moving Beyond The Page.  I chose the Language Arts Program - Greek Myths and the Social Studies Program - Greece & Rome because they went with what we were learning at the end of our school year. 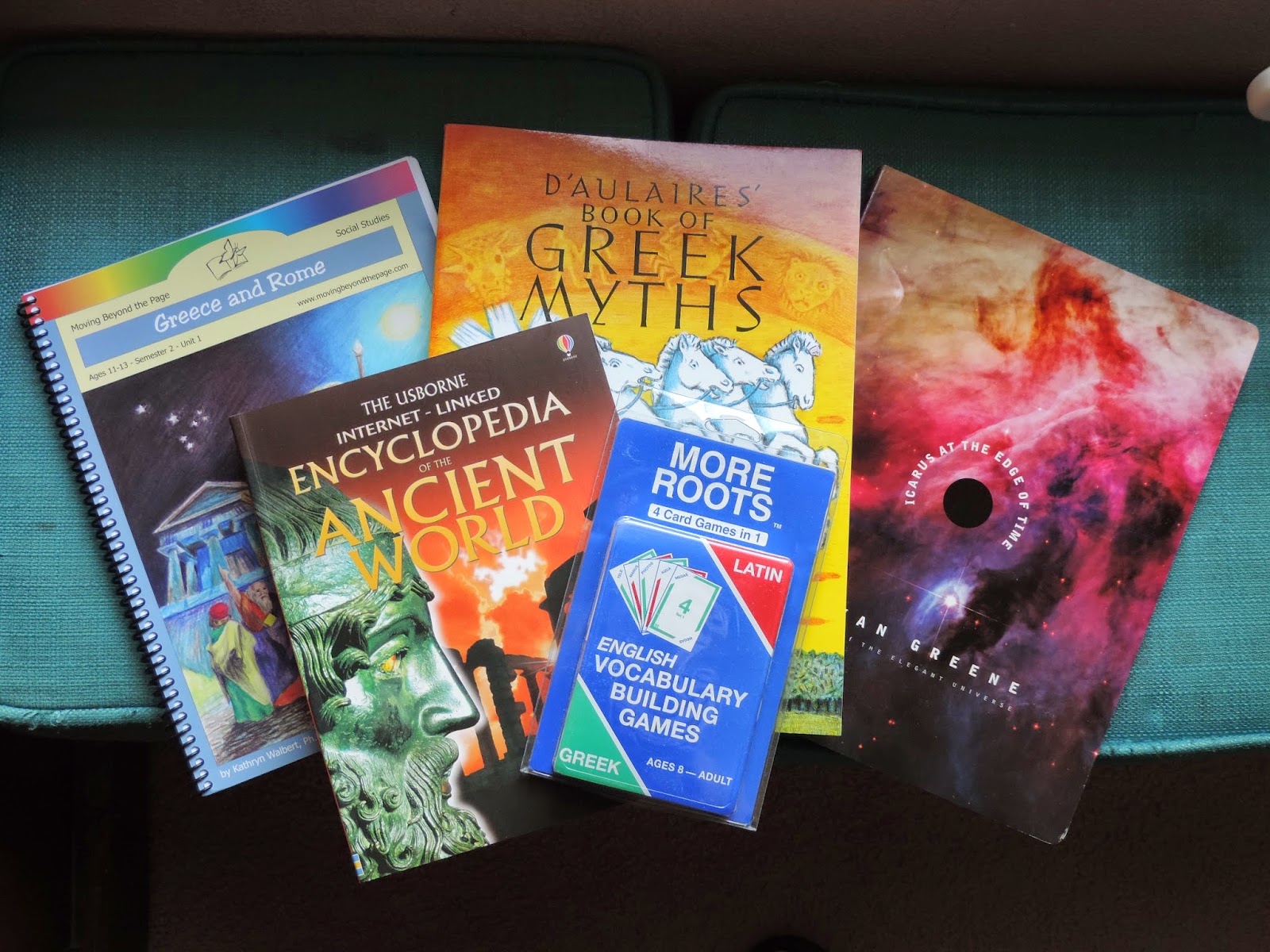 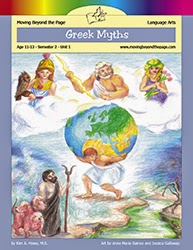 It wasn't until I saw the catalog that was shipped with my materials that I really understood clearly how the program was laid out.  The materials we received are a 3 week chunk of a greater plan for an entire school year.  Another thing that was helpful was watching the video that explains how the program works.

Moving Beyond The Page lines up language arts, social studies and science all around a central theme for each unit.  Doing this helps kids see learning as a whole, rather than separate, unrelated subjects. 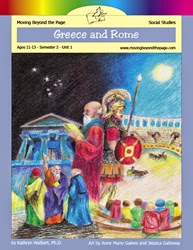 In our reading the very first day, we learned about Thera, a volcanic island near Crete, that exploded violently around 1450BC.  This tied in perfectly with the volcano science kit that we had started, so we worked on that some more. 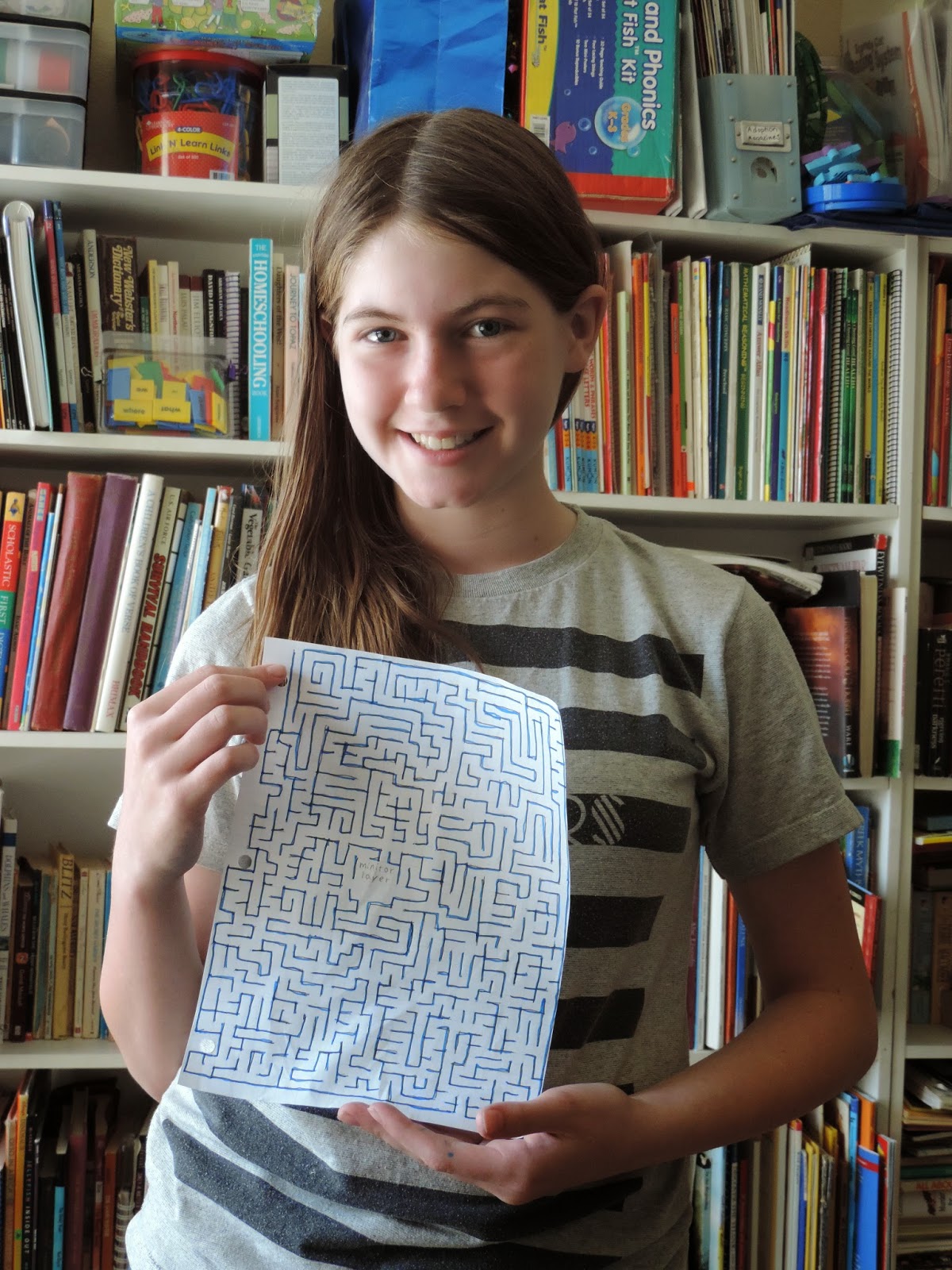 Reading about Theseus and the Minotaur labyrinth, one of our activities was to create our own mazes. 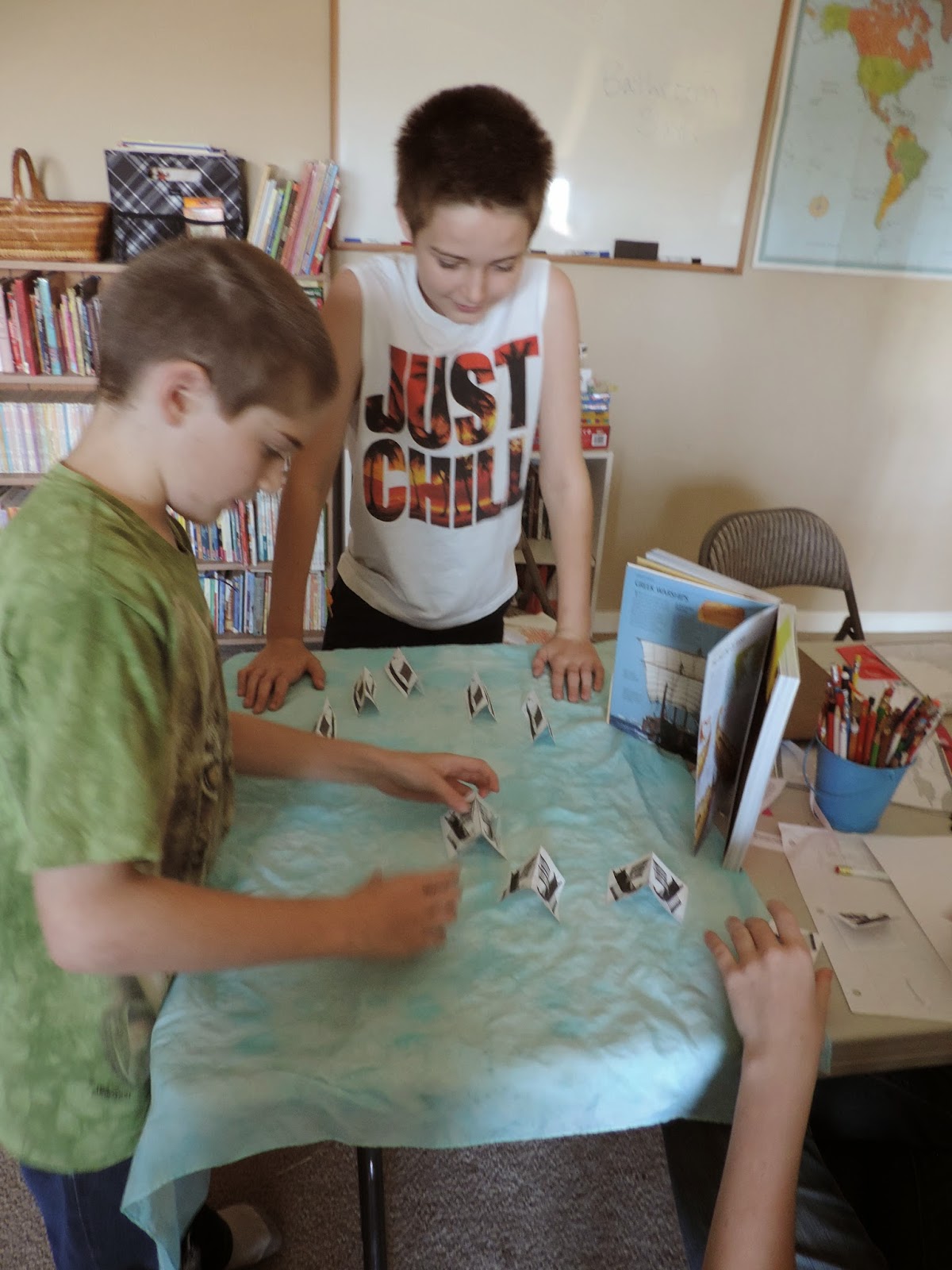 Another activity was a reconstruction of Greek naval battle tactics. 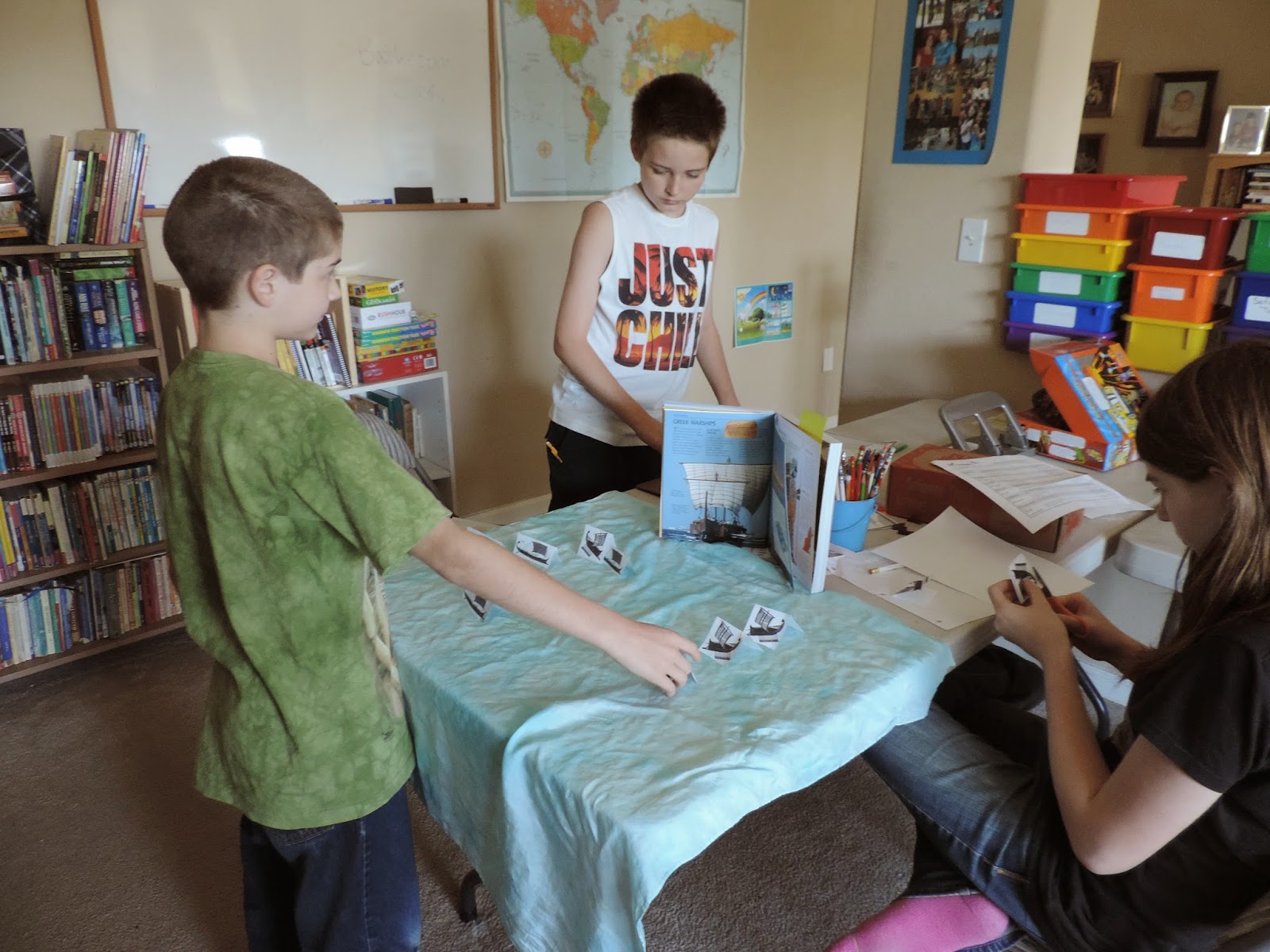 Moving Beyond the Page was far meatier than what I expected.  Because this was our Greece & Rome summer school program, I knew the kids would balk at doing all the Social Studies and all the Literature at the same time.  So we did the Greece section of Social Studies, then switched over to Literature for Greek Myths, then came back to Social Studies to learn about Rome at the end. 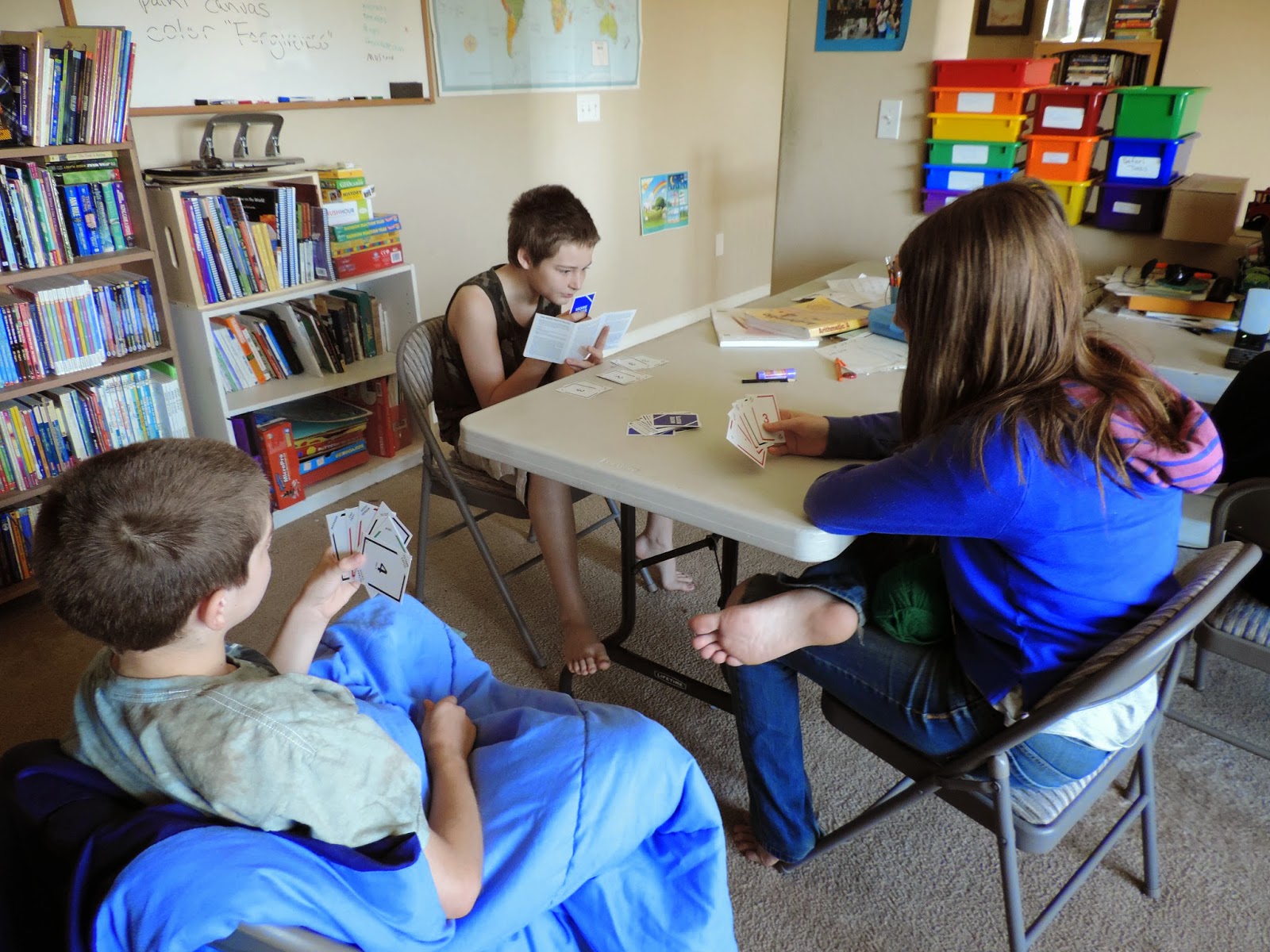 The More Roots game that came in our package was used several times to help familiarize the children with Greek and Latin root words. 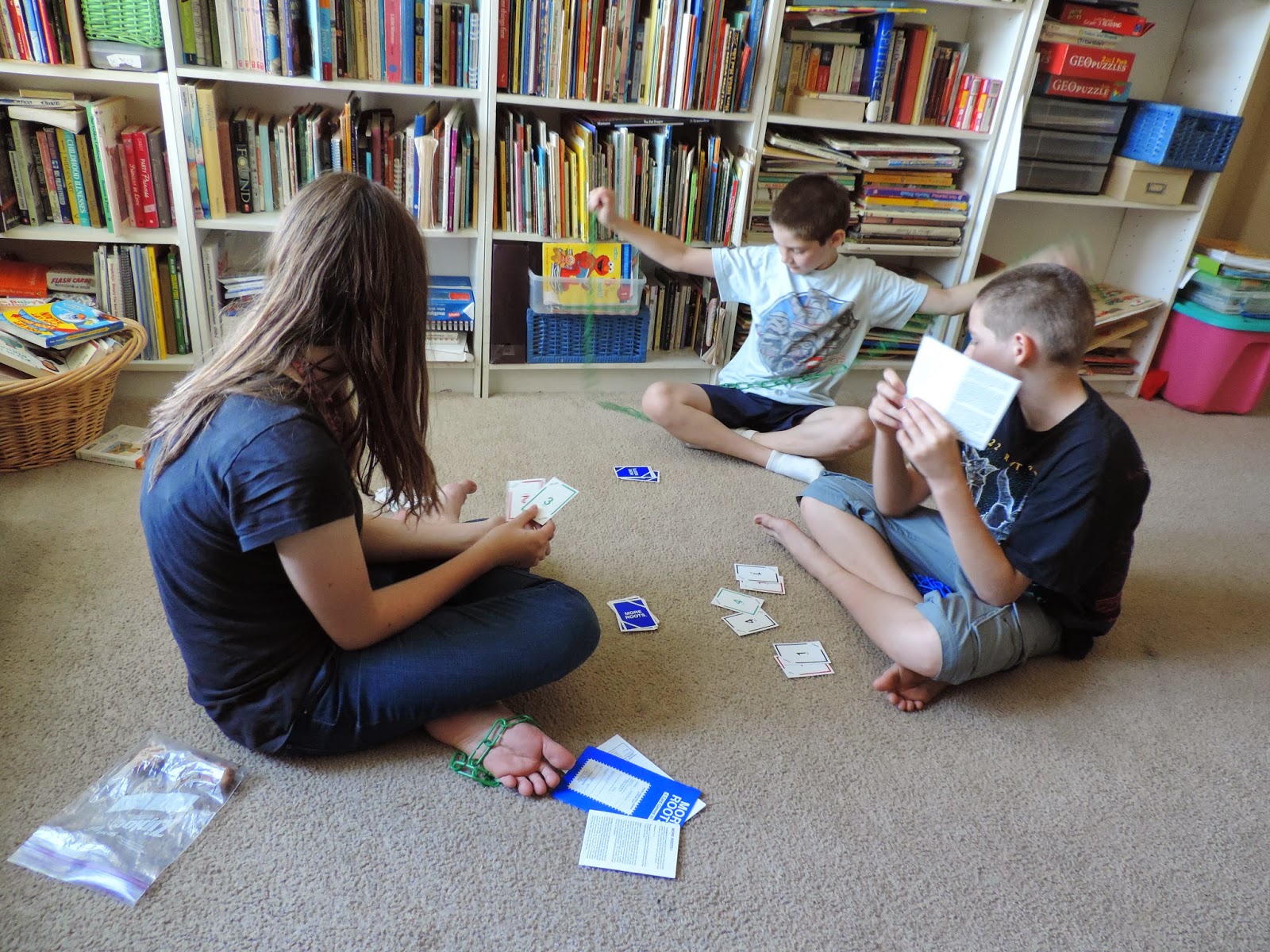 Although these three kids are my "reviewers,"  I caught Sam (who is 15) reading the books that came in our package--more than once!  Brianna also asked if she could take the Greek Myths book to her room and read it cover to cover instead of just the sections I read aloud, as specified in the curriculum.  This, to me, says MBTP chooses good books. 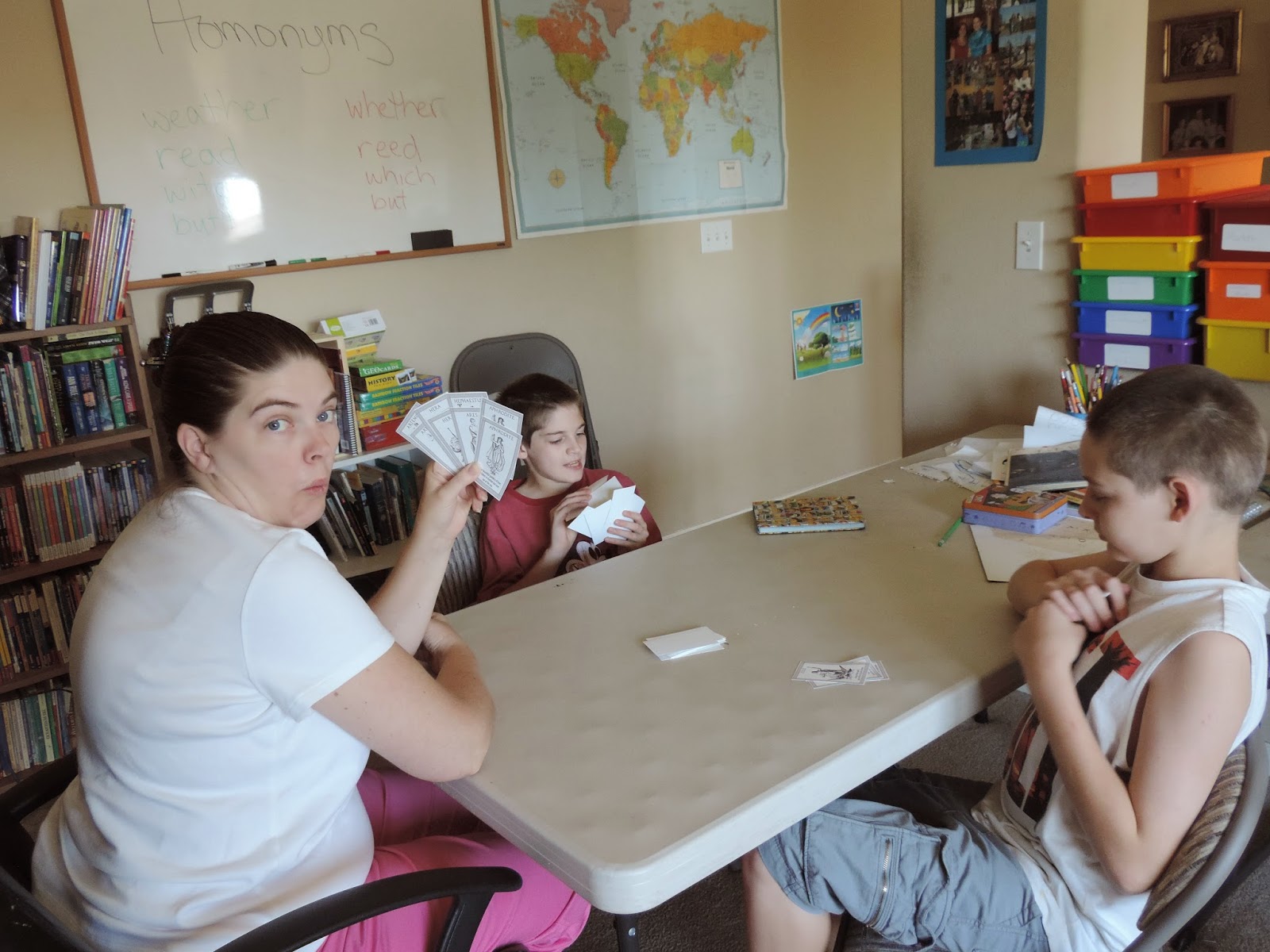 We also played "Go Greek," a form of Go Fish that I printed onto cardstock and Josiah helped me cut out. 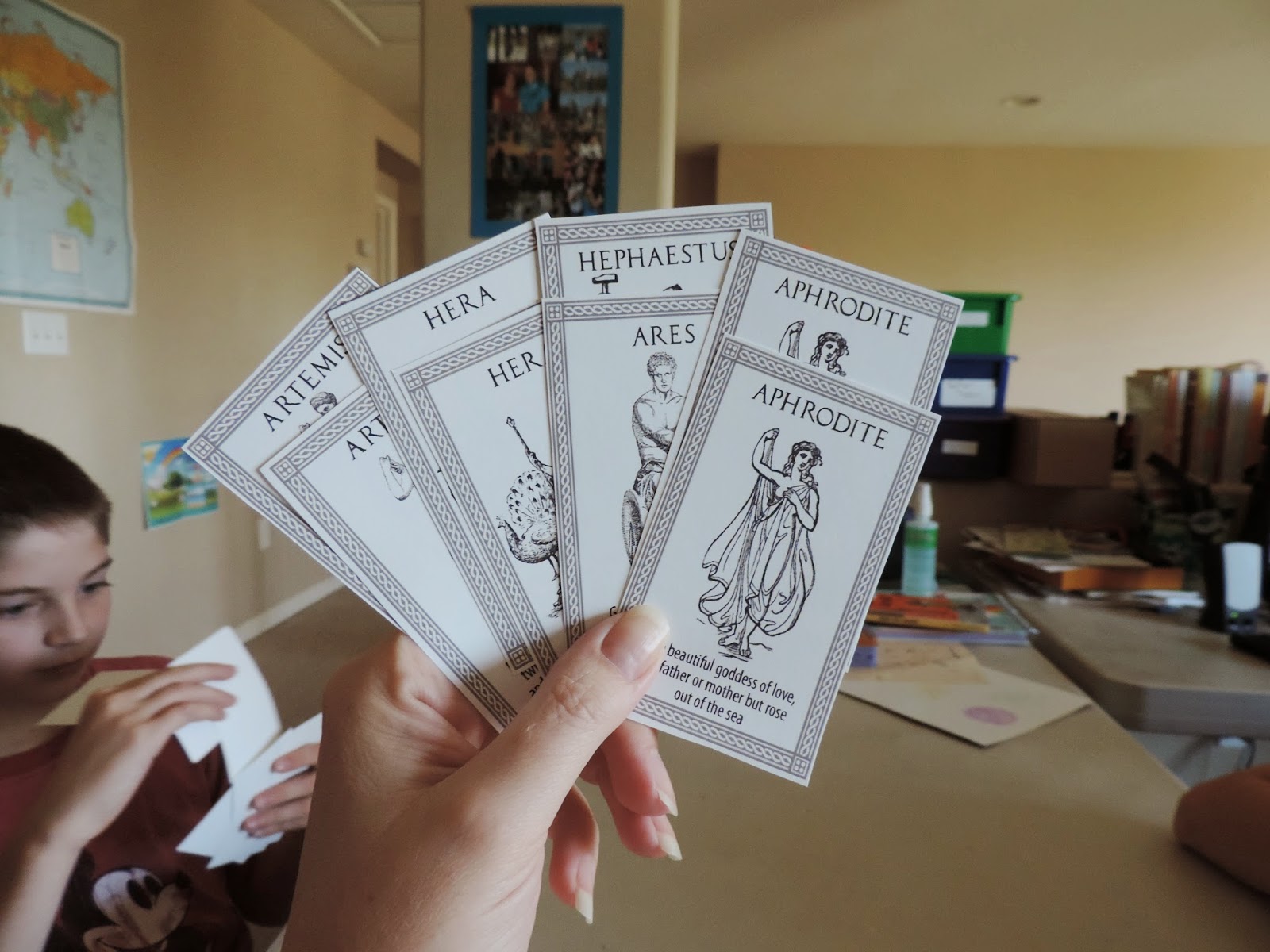 The cards helped reinforce who's who of the Greek gods and goddesses.  These would have been lovely in color!  I thought about asking the kids to take the colored pencils to them, but my boys are not big on coloring.

One of the activities was to create a Venn diagram, something my kids haven't had to do before.  This was fun, because it was a Venn diagram comparing Hercules to any superhero.  I used Larry Boy from Veggie Tales as my superhero when I did the example on the board.  It was a painless way to introduce the concept and a great discussion starter.  My kids also watched the Hercules movie on Netflix at this point, and compared it to what we'd read about him. 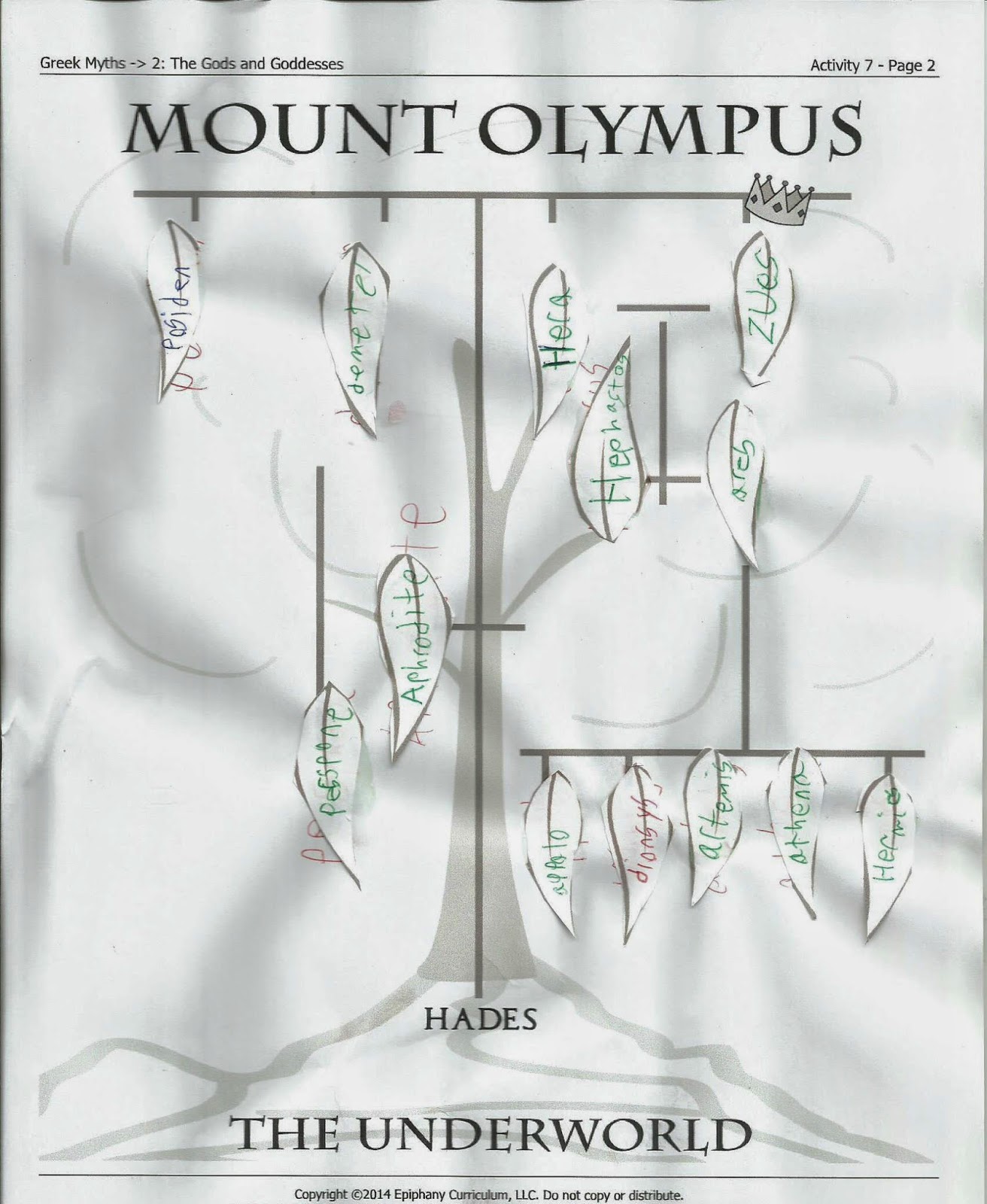 I had a hard time letting go of the things we didn't do.  Many days there are 3 options you can choose from.  I felt like they were all worthwhile activities, and I didn't want to "miss out" on any of them.  BUT, we were on summer routine, and I knew the kids would protest if school got longer instead of shorter!  It would be great to slow down and do everything, but I wanted to make sure we got through the book during our review period.

I think a year of MBTP would be really fun and interesting, but I also think that using just pieces, like we did, as a unit study or a summer program would be good, as well.  In conclusion, Moving Beyond The Page is a very in depth, comprehensive program, that is easy to customize to your needs.  I know some families like to slow down and really savor a subject, and while they may not get through 10 or 12 units in a school year, I think this would be a great curriculum for homeschoolers who like to meander through topics.

You can read what other Crew families have to say about their experience with other Moving Beyond The Page options by clicking the box below: