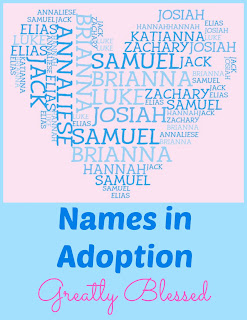 I remember with my pregnancies, I started thinking about names almost from the time two lines appeared on the pee stick.  It's not only a right, but an obligation for parents to name the children they birth and raise.

With adoption, things are a little more complicated.  For parents who do Domestic Newborn Adoption, sometimes birth parents want a say in naming.  Or adoptive parents may want to honor the birth parents in some way with the name.

With Foster Care Adoption, kids are older, they know their name, and sometimes there is baggage associated with it.  Consider a Junior who's birth father made poor choices or was abusive.  Should the child have to carry his abuser's name throughout his life?  Of course not.  But some children want to keep their name.  For some kids, it may be the only thing they have left from their birth parents.  Those feelings should be respected, as well.

In International Adoption, the name game can be a minefield.  Some families feel that since they're taking away their child's homeland, language, and culture, the least they can do is allow them to retain their name.  Other families want their child to fit in, both to their existing family with American names, and to the community at large.  They don't want their kids to be teased or constantly have to teach others how to spell and pronounce their names.  Again, with older kids, some children want to keep their name, others want a new name for their new family.  Some parents have changed a child's name on paper, only to discover that they refuse to answer to anything but their original name.

In any type of adoption, you may have family traditions you want to honor.  My husband's family gives the first son a certain middle name, and has for several generations.  When my husband adopted my son, we changed his middle name to follow that tradition.

Our adopted kids come from China.  Chinese names work differently than American names.  Chinese names place the surname or what we typically think of as the "last name" first.  Which makes sense in a very family driven society.  Who are your people, your clan, sort of thing.

Many orphanages use a pattern for naming their charges.  In lieu of a surname, children are given a character from the city the orphanage is located in.  For example, if your child comes from Hangzhou, her name may be Hang Something Something.   (This is not always true; I have also heard of orphanage directors who give all the children their own surname.)  Often all the children born in the same year are given the same character as their middle name.  So little Hang Something Something who was born in Year of the Pig becomes Hang Zhu Something.  It's that last Something that is the child's unique portion of their name, and often that last part is doubled as a nickname.  For example, Hang Zhu Yu was a beautiful baby, so the orphanage staff gave her the name for Jade as her personal name.  She would know her name as Hang Zhu Yu, but the staff might affectionately refer to her as Yu Yu.

Hannah has the last portion of her name as a middle name.  It has a pretty meaning, and the name flows well, as first, middle, and last each have 2 syllables.  Katie and Luke both have the last 2 portions of their Chinese name as their middle names.  Interestingly, the pinyan translation for the first character is the same for both of them, although they are different characters with different meanings.

Names are a huge part of one's identity.  And it is an honor to be permitted to choose a name for your child.  Fortunately, with most adoptions, families have plenty of time to make that decision.  Although my hope is that my girls will appreciate that we retained a part of their old name in their new name, my experience is that most children dislike something about their name (I don't care for mine at all!) so try not to take it personally if your child eventually criticizes your choice.

If you've adopted, I'd love to hear how your family chose to name your child or children!  Visit the linkup below to hear how other families reached their decisions.

This post may also be linked up at these linky parties.