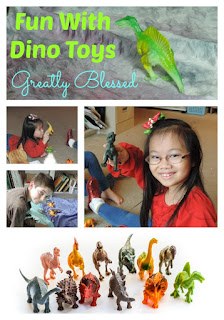 When I saw the opportunity to review a set of plastic dinosaur toys, it reminded me of when Zach was little and obsessed with dinos.  Zach is a grown up now, but his little boy, Brayden, is right about the age Zach was when he loved dinosaurs.  I decided these would make a great stocking stuffer for Brayden. 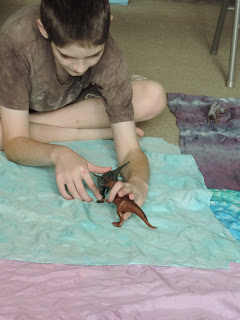 Little did I know how much my kids would enjoy them!  Eli saw them in my room and said, "Dinosaurs?  Can I play with them?"  I laughed (Eli's in high school) and said he could, but that I'd probably try to take pictures of him.  Well, he was having none of that, so I asked Jack to set up a dino diorama so that I could get some pictures.  Jack played with them all morning! 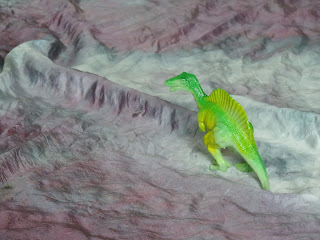 Eli named this one Ruffleosaurus because of the ridges on his back fin. 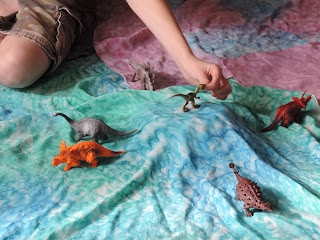 Dinos and playsilks go well together in creative play.  As you can see here, Jack's got the dinosaurs fleeing from a water volcano. 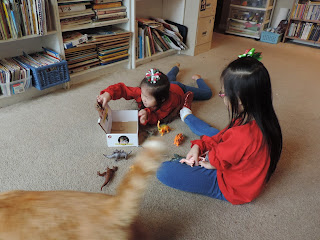 Once the girls saw Jack playing with the dinosaurs, they wanted a turn, too.  I was impressed at the organic learning happened while playing with this dino set.  In this picture, Katie is naming all the letters on the dino box. 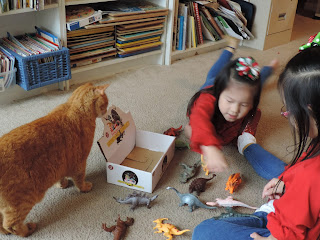 You notice the cat was photo bombing these shots?  One of the reasons (and I love this) is because these dinos don't stink!  You know that dreadful plastic off gassing that you get with some vinyl toys?  These are specially formulated to not have that bad smell! 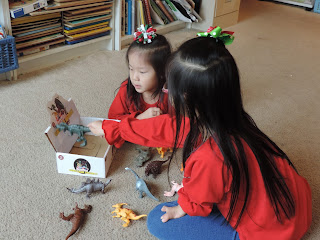 Hannah was reading the box to Katie.  In addition to creative play, we counted the dinosaurs, we named the colors, Hannah identified the dinosaurs she learned about at school last year, and more. 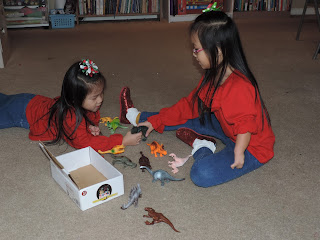 Of course, there's always the sharing and negotiating that goes along with playing together.  They're fun for solo play, too.  Hannah has been asking to have them during nap time (quiet play for the older kids) the last few days. 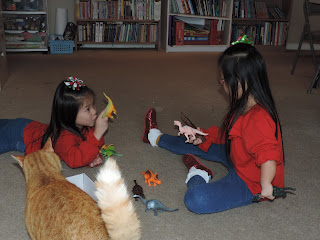 Listening to the stories they come up with to go with their games makes me smile, "And pretend that this one..." 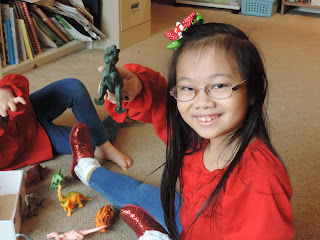 When I asked the girls, "Which one is your favorite?" they both had an answer right away. 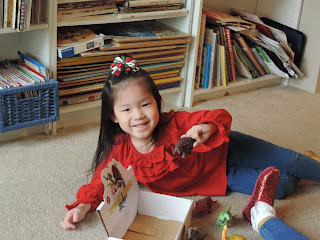 You can find these dinosaur toys on Amazon.  Rawr!