Our Week with the Sniffles 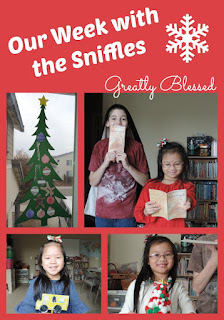 Some of the kids have been fighting a cold, and it caught me this week.  I ended up declaring Thursday a "teacher in service day" after we finished Spelling, and worked on wrapping gifts and filling stockings instead.  I can't read aloud when I have a cough. 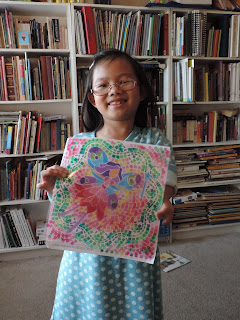 Hannah made this fairy mosaic during naptime one day.  It's another of our treats from 4Knowledge-4Fun.  They also have some other pictures, including glow in the dark sets. 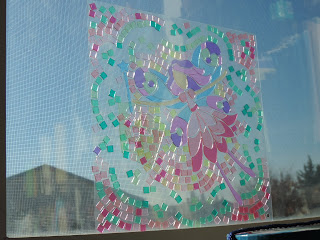 In other news this week, Jack finished his CAT testing this week.  Sometimes I suck as a homeschooler.  He started the testing in June, lol.  Almost 4 months later, he's done.  Most kids take the entire thing in a week or less.  Jack doesn't enjoy testing, so we only did one section at a time, with plenty of days weeks off in between.  I need to be more diligent about getting the test done in a timely manner next year, because I think he's learned enough during this time that he would score better in some areas (mainly language mechanics) now than he did in June.  In my defense, things went from crazy to crazier as we added 2 toddlers to the household at the end of June, and Luke came home in August. 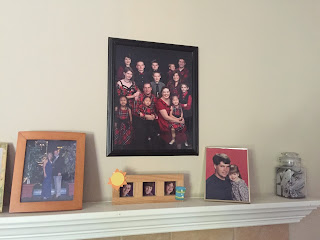 Before I left for China, we had new family pictures taken, and this week, we finally picked them up.  They've been sitting at the mall for a while.  Eli is my picture frame helper, so he took down the old photo... And put up the new one!  I'm not delighted with the composition of this one, but it does the job.  I think it needs Annaliese standing behind Jack, next to Brianna.  Speaking of Ese, we got to Skype with her this week, which was cool.  She's enjoying Australia, and was visiting Paul's sister and her family for Thanksgiving. 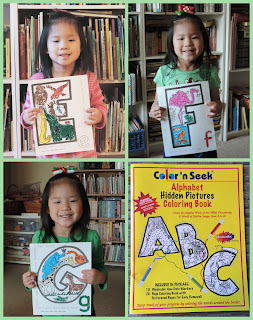 Katie continues to work on her alphabet coloring book.  Every time she finishes, she asks for a piece of tape.  She's going to have quite the collection by her bed pretty soon! 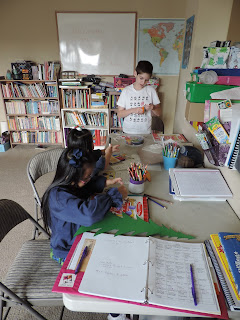 I'd been having Hannah do some sequencing and cause & effect worksheets from SuperTeacher Worksheets, which we reviewed in September.  A friend suggested it after reading that Hannah was having a hard time answering questions about a passage after I read it aloud. 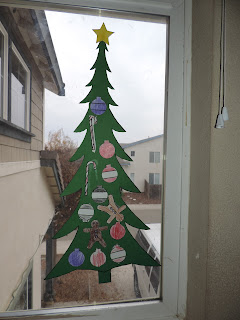 While I was on STW, I browsed their Christmas offerings, and printed this Christmas tree for Jack and Hannah to make. 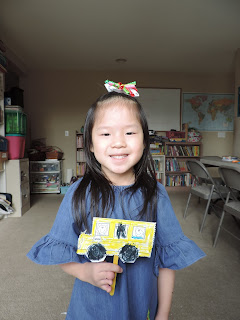 I think I've mentioned before the Katie has a thing for buses.  She is always pointing them out when we drive around.  This page of her scissor skills book was particularly fun for her, since she got to cut and fold a bus.  We stuck a craft stick in, to make it a puppet. 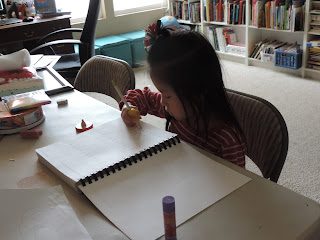 Katie started math this week!  She's using MUS Primer.  I am loving our slow and gradual start to kindergarten.  Now she's doing spelling, handwriting, and math, as well as her computer time on Reading Kingdom. 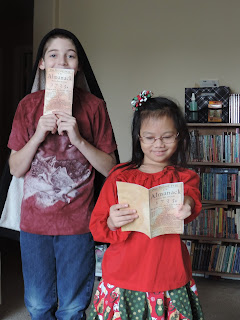 In history, we finished up our skim of China and started on Ben Franklin.  We've hit the 1700s now.  The kids made a simple version of Poor Richard's Almanac and we discussed some of the sayings in it.  My personal favorite was, "Well done is better than well said."  Followed closely by, "A good example is the best sermon." 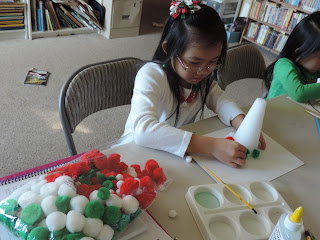 I'm trying to decide if this was a PinFlop or not.  I was scrolling Pinterest looking for dragon crafts, and saw a Christmas tree idea that looked cute and easy.  Ha.  That's how they suck you in, isn't it?  So while Brianna was at the dentist Tuesday afternoon, Sam and Eli and I went to Hobby lobby and picked up styrofoam cones and pom poms.

Basically, you glue the pom poms to the cone, then you put a star on a toothpick and stab it in the top.  Simple enough in theory. 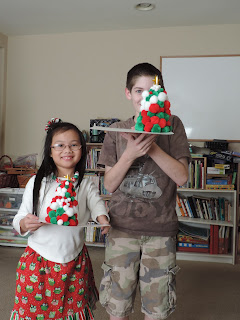 I have to say, if we were to do it over again, I would use pom poms that were uniform in size.  I pulled out the gold origami paper we had leftover from our ARTistic Pursuits review earlier this year, and we used that for the stars, but yellow felt would work well, too.  Also, I would have cut a circle a little larger than the cone for a base.  They both ended up unintentionally gluing their trees to the cardboard they were working on.  I would also choose a different glue.  The clear school glue doesn't hold well long term.  But we had fun, so it's all good.

This coming week should be fun, as we have a learning box kit thing for Native Americans to work on as we cover the French & Indian War.  If you missed it, I posted about Everett, another of the boys I met in China last month.  I would love to have you share that with anyone you know who might be interested in adopting!