Our Week - end of January 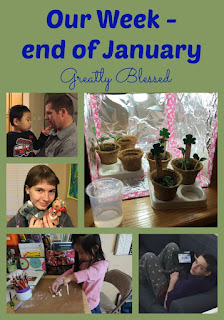 Hard to believe it's time for another weekly wrap up, let alone the last one of January!  It's gone by quickly, with 3 appointments and with Paul only being home 3 days. 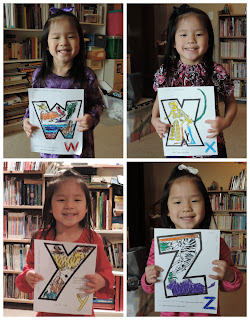 I was wrong!  I thought Katie would finish her ABC coloring book in February, but she finished it this week.  This actually works out well, because she's suddenly doing more coloring in math, and I think her hand gets weary after a while.  Although the link above in not an affiliate link, there are affiliate links within this post. 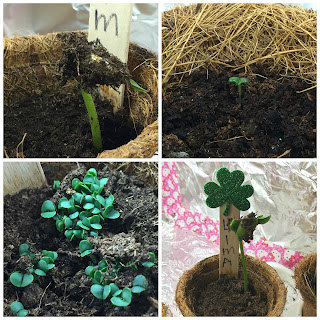 In botany, we're enjoying seeing our plants popping up.  We've been amused by the clump of dirt clinging to a lima bean stalk. 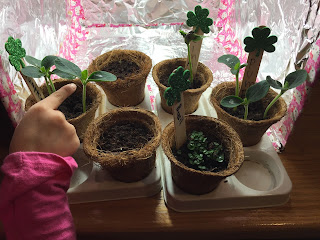 The pumpkin plants are showing their first true leaves now, and we've observed how seed leaves are different than true leaves.  It's always so fun to watch kids get into growing things.  I hope the kids will want to be involved when it comes time to replant the porch planters soon. 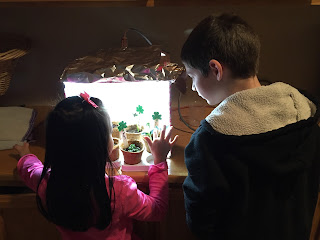 Eli wants to build a small light hut and do a time lapse stop motion video of a plant growing.  I think that would be really cool! 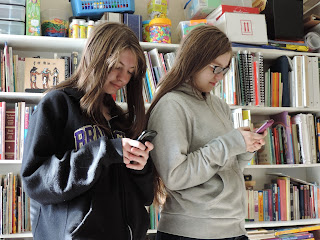 Teenagers.  I love watching my kids grow up.  And I like my teens (and many of their friends, too, like Miss A, above).  But some of the issues that come up are a little scary. 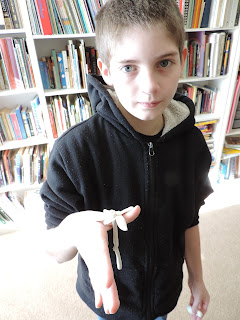 Another botany project this week was to make a flower from clay. 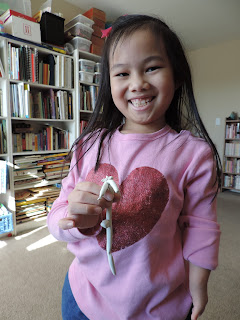 Jack's been enjoying playing with the clay ever since.  Sometimes I need to be reminded to get "the cool stuff" in the school room out and actually use it. 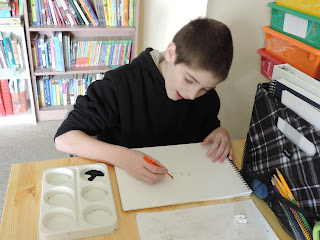 We learned about the Declaration of Independence this week, and practiced writing with feathers. 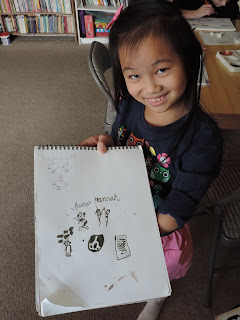 We did NOT make ink from crushed berries, because I'm lazy.  We used brown liquid watercolor. 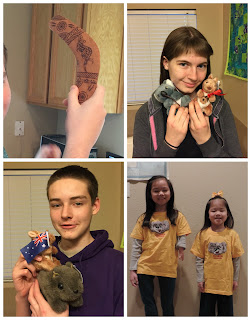 We got a package from Annaliese this week!  A fun little box of Australia trinkets including kangaroo jerky, Vegemite, animals, boomerang (I promised Josiah I wouldn't put his face on the blog), koala t-shirts, and pencils.  She seems to be having a great time in Australia.  I'm thrilled for her, and maybe a tiny bit envious as I see her post photos of fireworks over Sydney harbor on New Year's Eve. 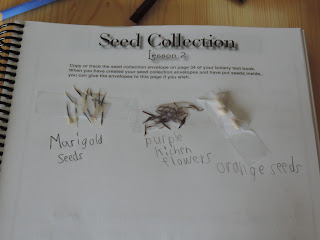 Back to plant science.  We've started noticing and collecting seeds in our botany notebooks.  Both from dying flowers (always an abundance of those around me) and from the foods we eat.  We've also observed seeds from various seed packets. 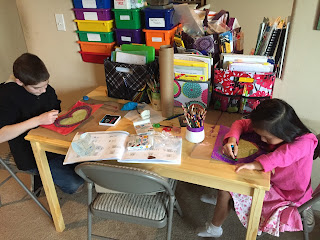 This week, because Hannah was at the eye doctor one day and I was at the dentist 2 days, we did not do a whole lot of artsy crafty stuff, but we did do one project. 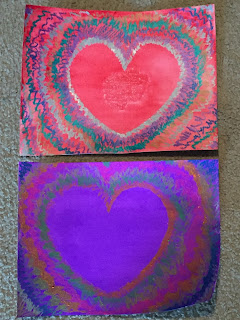 We used liquid watercolors to paint a whole sheet of watercolor paper one day.  Then a few days later, we used the leftover sticky hearts from the girls' glitter heart shirts to stick in the center of the page, and then we use oil pastels to color bands around the hearts.  After removing the sticky heart, the original watercolor color shows. 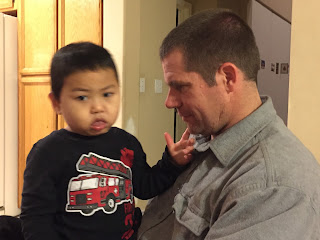 Luke used to lean forward and slam his head into the floor when he got upset.  Now he's scooting over to a wall and slamming his head into walls instead. 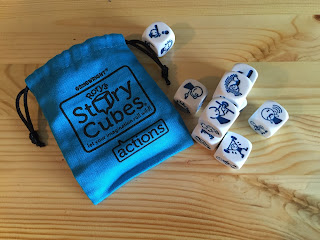 I saw these dice ages ago and thought they'd be a fun addition to our homeschool.  I'm embarrassed to admit how long they sat, unopened.  I recently saw a couple of blog posts about using them and finally decided to open them.  Since Jack was reviewing verbs, we started with the action story cubes.  I gave Jack 4 and Hannah 4 and asked them to pick a picture from each and write a sentence about it.  The kids liked the dice, and we have several more Creative Writing ideas planned for them.

Miss Hannah should have new glasses in the next week or two.  I've had to write a little larger on the board for her, but other than that, we're getting by.  My new glasses have arrived, although, I keep forgetting to wear them to drive the kids to school in the morning!