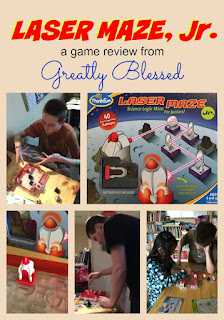 Our friends at Timberdoodle sent us Laser Maze, Jr. recently.  I pulled it out during our last hour of school one day, and Jack and Hannah were super excited! 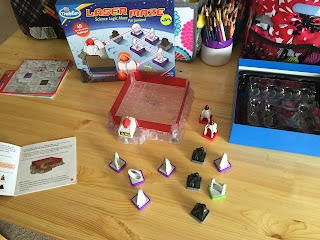 We took out the pieces and started familiarizing ourselves with the mirrors, rocks, rockets, and splitter. 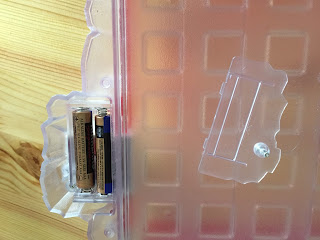 This game requires 2 AAA batteries, which are not included. 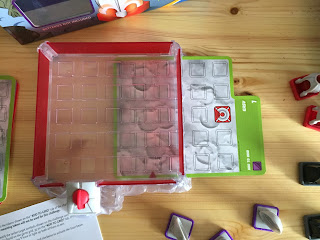 The challenge cards, which start out easy and get progressively more difficult, slide into the base of the game.  Each card tells you where to place the rocket (and other pieces) and which pieces you can add in order to get the beam to light up the rocket. 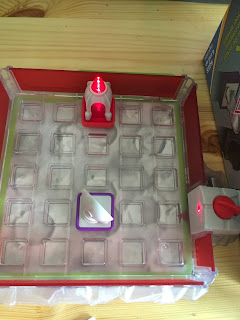 You turn the laser on and then redirect the beam in order to light up the rocket or rockets. 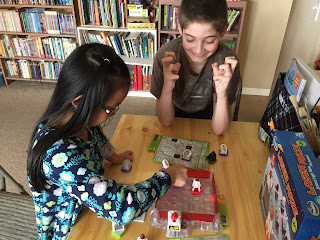 Jack is 11, and he "got it" right away.  After doing a few of the easy cards, we gave Hannah, who is 8, a turn.  You can tell by Jack's face, he really wants to help her.  Sometimes it's hard to watch and let her figure it out on her own, but I can see how this game would be very good for her.  Logic, as the professor in the Chronicles of Narnia laments, is no longer taught in schools.  But it's something we need in order to make good choices.

Kids from less than optimal beginnings need help in learning logic, and what better way to do it than through a fun game like Laser Maze, Jr? 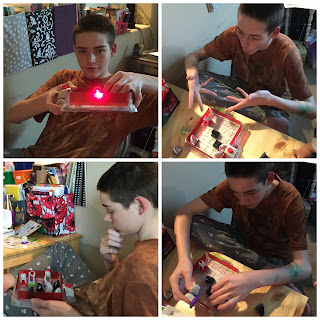 Laser Maze Jr. is designed for kids ages 6 and up.  Some more of our "and up" contingent came home from school and had a blast playing with it.  Eli is 14, and Jack took great delight in showing his big brother the ropes.  The boys like to challenge themselves by working on the hard cards.  Eli also bounced the light around the school room floor, trying to get the cat to chase it, but Wheelie is no spring chicken, and pretty much ignored the laser beam. 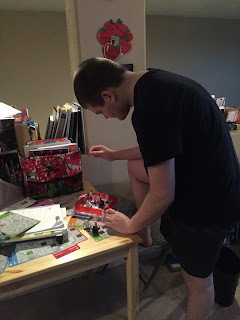 I like to leave interesting things out in the school room and allow whoever wanders by to stop and mess with them.  Such was the case with our new game.  Josiah was focused enough on what he was doing that I was able to snap several pictures of the normally camera shy teen. 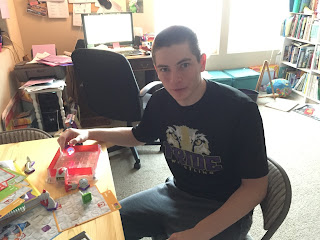 Sam also gave it a whirl.  He enjoyed doing his own thing more than trying to master the challenge cards, and told me I should be proud of his "outside the box thinking." 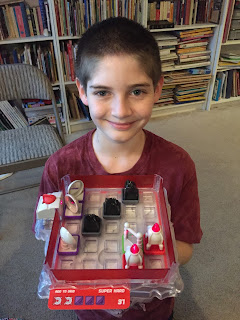 Jack Jack got through almost every single card in just a couple of days.  One of the cards was particularly frustrating to him, but he persevered until he had mastered them ALL.  I'm very proud of him.  He then discovered that the instruction booklet has the solutions to the cards in the back.  I'm glad we didn't realize that until he had conquered the one that was troubling him.  I'm sure he has more pride in successfully figuring it out than if I'd said, "Let's look it up and see how it's done."

Laser Maze, Jr. is currently selling for $27.99 at Timberdoodle.  It is also included in the second grade curriculum kit that Timberdoodle puts together for families who like one-stop homeschool shopping.  In looking at the curriculum kits, I saw some of our favorite products included, such as Spelling You See and Reason For Handwriting.

If your kids are all older than 8, you may wish to go with the regular version of Laser Maze (without the Jr.), which is also available at Timberdoodle.  Same idea, but a little more challenging.  Personally, we found Laser Maze, Jr. to be challenging enough for our whole household!