Our Week with Snotty Noses 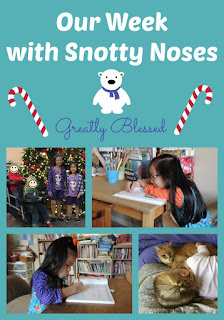 We managed to get more time in the school room this week, which I'm grateful for.  However, we have a cold running through the house, which I could do without. 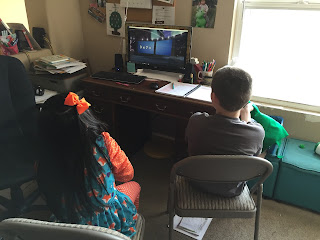 I noticed that Jack and Hannah's multiplication facts are a little rusty, so we re-watched Times Tales again this week. 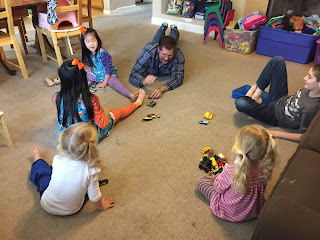 I rarely buy the kids toys "for no reason."  Birthdays and Christmas, sure.  Educational things, I can pretty much always justify to myself, but plain old toys?  Not so much.  The kids have been playing with the car bucket A LOT lately, and many of the cars were Paul's when he was a kid, then got passed to one of his cousins when he outgrew them, and came home with us when Zach and Josiah were little.  So they're wearing out.  I've tossed a couple of the broken ones.  When I see them playing with the cars, I think, "We need some fresh blood in there."  Well, we were at Target this week, and went down the car aisle.  I let everybody pick out a new car to add to our bucket.  A car not from the 1970s.  This, of course, made the kids even more interested in playing cars, and we had to do some math to figure out that with 77 cars in the bucket, each child can have 15 of them, and we don't have to fight over who gets more.  I'm thinking 15 cars per kid is plenty.  When none of the big kids were playing cars, our little friends lined up the whole lot of them, and it makes an impressive row. 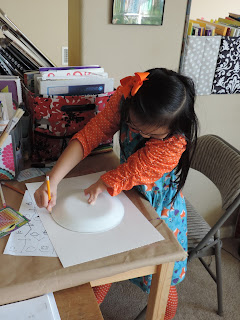 We did the second to last project in ArtAchieve.  Jack did his circle in sharpie, so now one of my plates has a black rim. 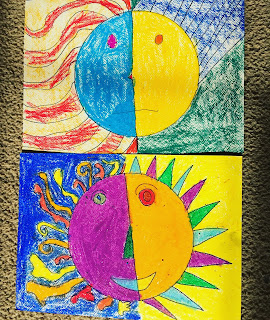 I found it to be very similar to the sun project we did from Home Art Studio, except this one was in oil pastels instead of paint. 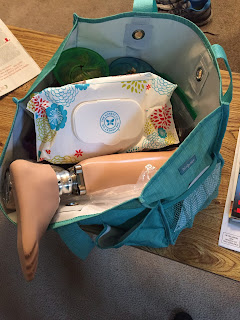 Packing the diaper bag for a trip to Shriner's.  Diapers, wipes, leg that doesn't fit...  We ended up being there for 3.5 hours, and the leg still doesn't fit.  Going back next week. 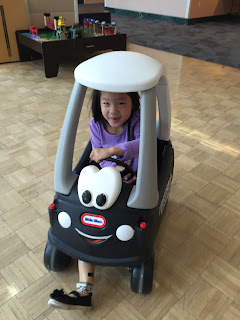 Fortunately, we got to spend some of that time in the second floor play room. 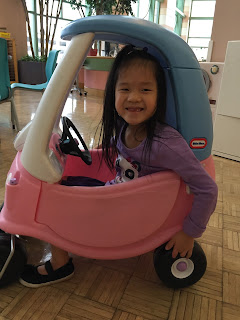 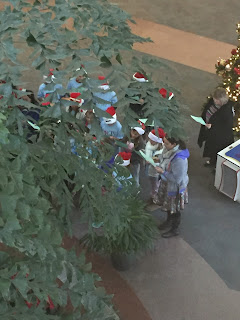 A group of carolers came in and sang Christmas songs for a while downstairs, which I appreciated.  They were gone by the time we finished and went down.  I would have liked to say thank you. 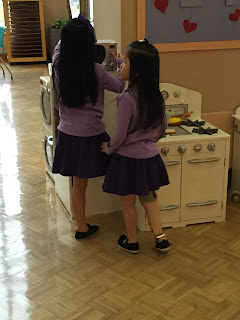 If you look closely at this picture, you'll be able to guess which child's leg was in the back being worked on while we played. 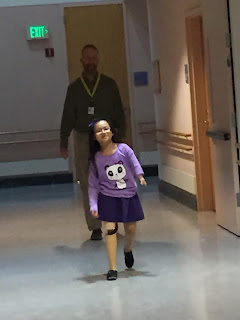 Our usual prosthetist is out for knee surgery.  We've had Mr Rick ever since Hannah came home, and we really like him, but Mr Eric, the new guy, seems nice, too. 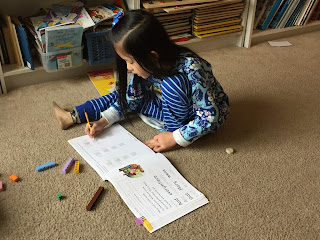 I'm pretty impressed with how well Katie is doing with spelling and reading.  It was such a challenge for Jack, it's nice to have a child who takes to it easily. 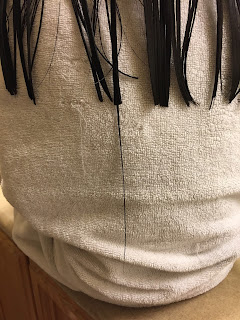 I did hair cuts this week!  I didn't think of doing before and after shots until I was already cutting.  I took about 6" off Katie's hair.  Katie's hair is thinner and more straggley than Hannah's, so I'm hoping this will make it more manageable.  Hannah is starting to say she wants her hair short like Brianna's, so I took about 4" off, even though she didn't really need a trim.  She says it feels lighter, so I'm hoping that keeps her happy for a while.  I love her pretty long hair. 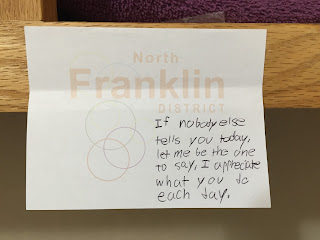 I found this note in the laundry room.  Totally made my day that one of my kids actually notices and appreciates what I do around here. 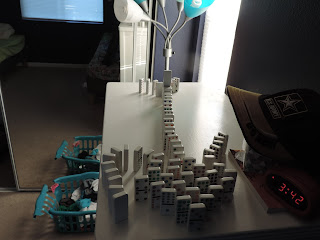 Found this picture on the camera.  Jack's been setting up domino runs. 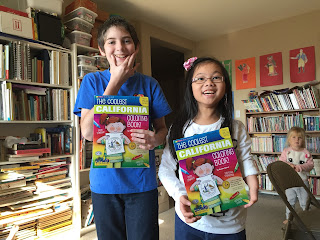 We finished our California coloring books this week.  It's been many years since I did California history with the kids, and I'm really enjoying it. 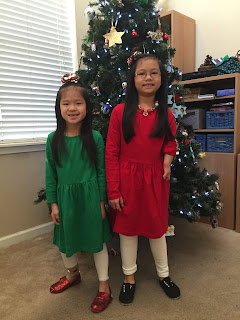 Have you heard of Primary?  Plain, solid colored kids clothes without logos, graphics, words.  I got the girls purple dresses for football season, and now these for Christmas time.  Here's my referral link! 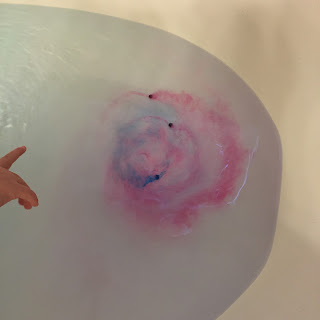 The lazy homeschooler in me is calling this science.  Hey, look, we're learning color mixing and we're seeing water movement at the same time.  It's kind of cool, right?  Oh, yes, and getting the children clean, too.  That was the point, after all. 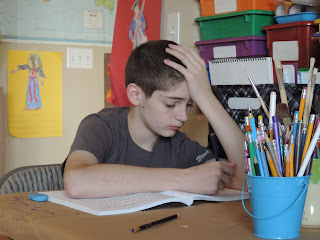 As long as we keep up with Spelling and Math, I'm good.  With sick kids and sick Mommy, science, history, geography, and language arts have been hit and miss.  I'm glad the kids like to read, because I feel like even when they're not doing as much assigned work, they're still learning.

I'm hoping next week we can paint ornaments, but we'll see how it goes.