Our Week with an Unplanned Trip to Santa 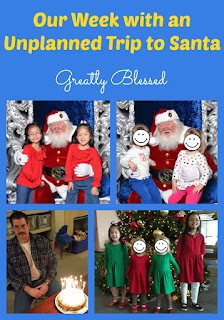 Another week whizzes by as we careen toward Christmas. 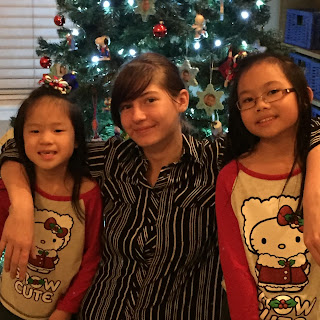 My girls, being "snow cute" in front of the Christmas tree. 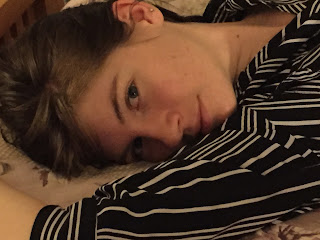 Beautiful Brianna, lounging on my bed. 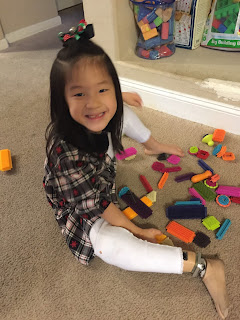 This week has been busy, but we've had plenty of play time, too. 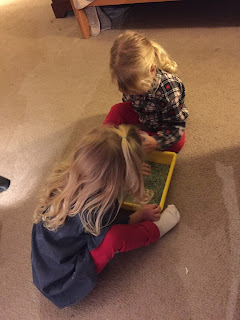 I got the rice tray out for the first time in months.  It may be time to make a new batch of rice to add, since after this session, I vacuumed up at least half a cup worth out of my carpet. 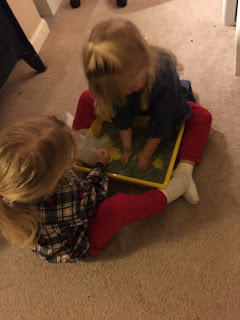 It was worth it, though.  They were having so much fun, measuring and pouring with our science beakers. 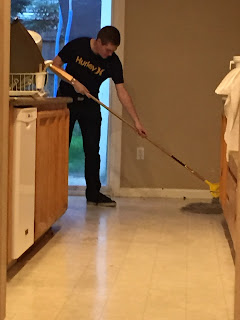 I spy Josiah mopping!  Such a rarity I had to capture it "on film." 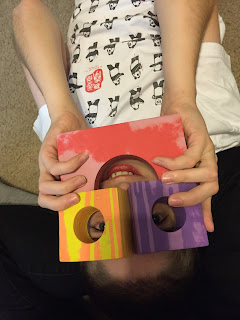 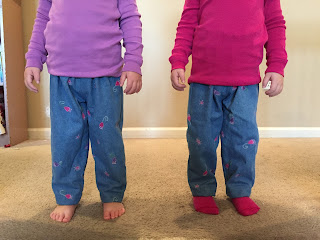 I sewed!  I made 3 pairs of pants for our little friends.  (The other is striped leggings that haven't been worn yet.)  The denim is embroidered with pink and purple flowers.  Brianna had a pair of pants out of this fabric when she was about 6. 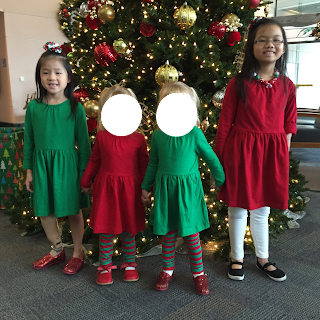 Another trip to Shriners.  Still no good on Katie's new leg.  They're pretty much going to rebuild it.  We go back in January to try on the new new one.

Poor Hannah got sick right after we got there.  Seems to have been a 24 hour bug. 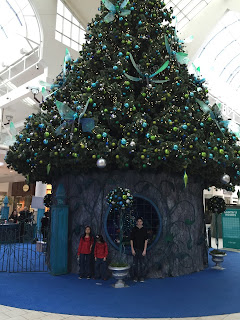 So, one day, we ended up in Sacramento early in the morning.  And Hannah needed to use the bathroom.  We were sorta near the mall, so we stopped there to hit the potty.  The stores weren't even open yet.  But the decor was really pretty, so I told the kids, Hey, go stand under that neat tree! 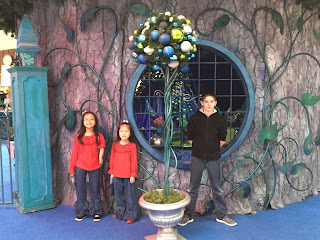 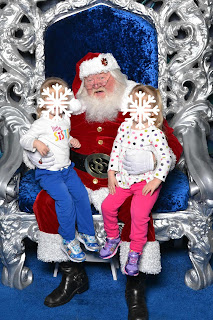 While we were there, I noticed that Santa was already present and receiving visitors.  Since there was no line, I decided we'd go check it out.  The fee covered a "package" of photos, printed from ONE pose, and online access to all the shots from the quickie photo session.  That worked for me, so I paid and we took turns sitting on Santa's lap and telling him our materialistic desires.  As an aside, Santa was giving out cheesy little coloring books instead of candy canes this year.  Color me traditional, I'd have preferred the candy cane. 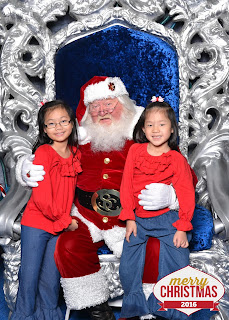 So we get done, and the girl pulls up the images and is trying to select the best one of our little friends.  When I realize that she's picking a pose to print, I say, "No, the Chinese ones are mine.  The blonde ones are not mine."  She gave me a funny look and said, "I need more coffee."  It was kind of hilarious.  We laughed, I showed her a family picture, and she asked how many kids we had. 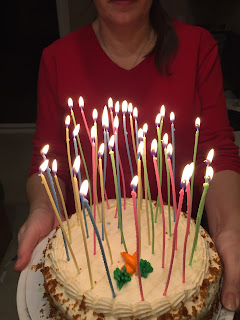 Paul had a birthday this week. 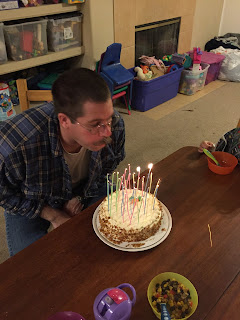 And he got all the candles out in one blow!  (It was only 3 12 packs of candles, not his actual age, but still lots of flame.) 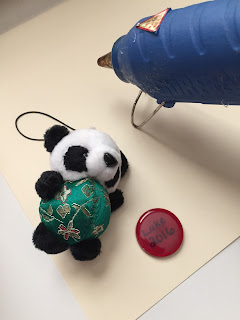 I wanted to send a panda ornament from my recent trip to China to Lukey with his gifts.  I thought I'd be all crafty and make this little button with his name and the year on it.  I used a circle punch, Dimensional Magic, and an acrylic circle to make the little button.

The button turned out fine.  A little blurry from the ink running, but totally legible.

I plugged in the glue gun and put hot glue on the back of the button, burning myself in the process, because, let's face it, I haven't crafted in ages.

So I make the decision to press the panda onto the gluey disc instead of picking the button up and potentially getting more hot glue on my fingers.

I press the panda onto the button.  I hold it in place to let it set for a while.  And when I pick it up and turn it over, I realize that I'm kind of an idiot. 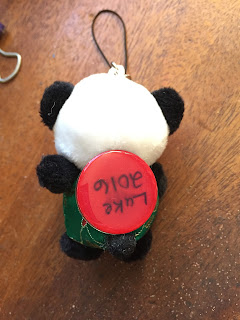 You know what?  I sent it with his presents anyway.  I'm hoping his family will laugh at it every year and think of that crazy lady who couldn't quite parent Luke, and couldn't quite craft either. 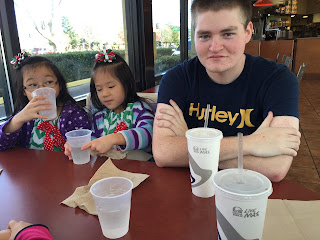 Killing time, waiting to pick Brianna and Eli up from a half day (finals) at school.  They're OUT now.  2 weeks of 4 teenagers all the time.  But without the nice summer weather to send them out into. 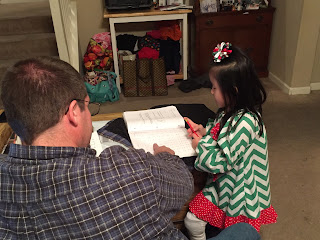 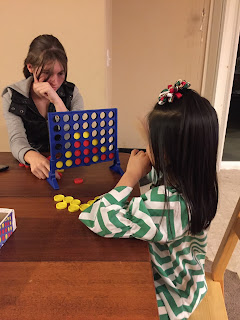 I think Jack and I playing games has reignited interest in them.  There will be a couple new games under the tree this year.  I'm looking forward to playing them with the kids. 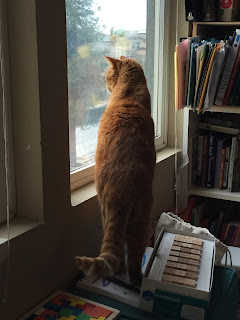 I thought Wheelie looked pensive as he stared out at the rain.

Honestly, I have no idea what the coming week will bring.  I keep thinking I'm going to get more school work done, and it keeps not happening.  I'd like to pretend that with the teens home to help, it will happen, but I think I should know better than that by now.