Neighborhood Night Out, Swimming, and More 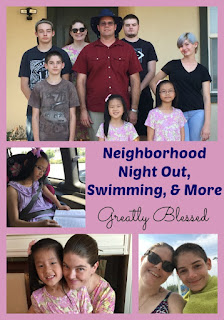 It's been a full week!  Starting to ramp up the "back to school" awareness.  We only have 2 weeks of summer left for the high school kids and 3 weeks for the younger ones. 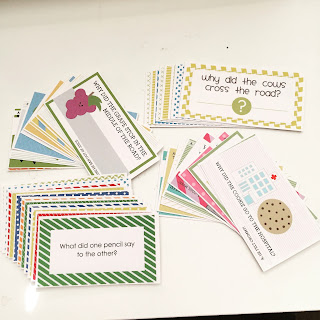 In the interest of learning to be a "school mom" instead of a homeschool mom, I printed some lunchbox riddles and notes on card stock and spent my "Amazon Prime time" cutting them out and watching '80s TV.  Photo is a little more than half the collection.  Any wagers on whether I manage to put them all in lunches, or whether a dozen (if not more) end up relegated to the kitchen drawer forever? 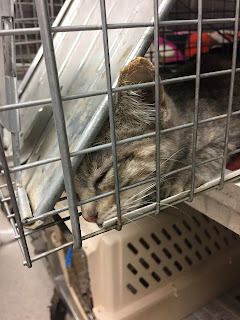 I got to volunteer in a feral cat spay/neuter clinic!  Community cats are trapped and brought in by concerned citizens.  The clinic alters them to prevent growth of these feral cat colonies, clips the ear to indicate they've been altered, treats them for ear mites, fleas, worms, etc, and vaccinates them. 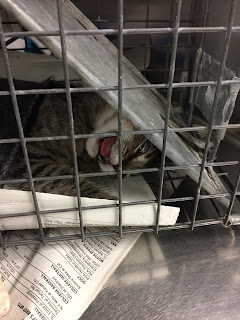 I worked in "recovery," moving anesthetized cats from the vax table to their cage or carrier, keeping them warm, and monitoring them as they woke up.  I learned so much!  I'd like to do it again next month. 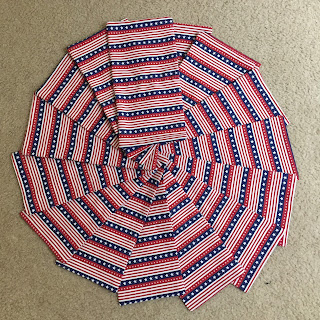 My not very exciting pile of empty rice bags that I sewed for BloodSource.  I made 18 in two batches.  I've always been a fan of batch sewing.  It's easier to make half a dozen shirts than it is to make a shirt, a dress, and a pair of pants.  I dropped these off the other day when I picked Bri up from Army PT, since the recruiter's office is practically next door. 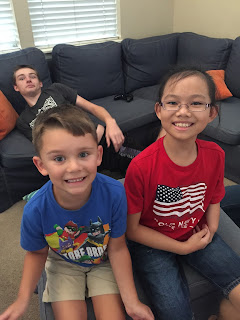 Brayden was here for a few hours, which is always a highlight for my kids.  He and Hannah played on the Wii together while it was too hot to go out on the trampoline (which is a favorite). 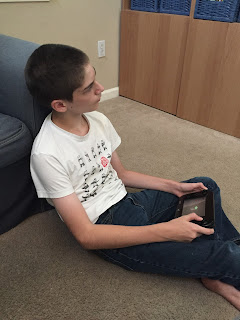 I've seen a lot of this this summer.  We do have a "no wii before lunch" rule, to keep them from being total zombies all day, but I think it will be good to get back to learning soon.  I drank the Minecraft kool aid, and console myself with the misguided notion that "at least it's a creative video game." 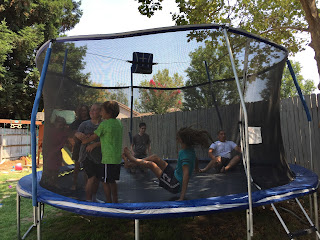 We attended a friend's adoption finalization party this week. 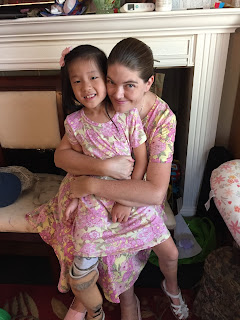 I know a time will come when my girls won't want to match with me any more, but for now, it's a very visual reminder that we belong together even though our faces don't match.  People stop looking around for an Asian mama when they see we're dressed the same. 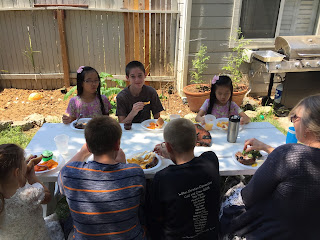 My adopting friend and I met a couple years ago through the ministry of Safe Families (we were both host mamas), and their kids go to the school that my younger ones will be attending, so we got to meet some other people from the school. 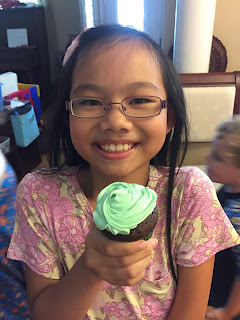 And the highlight of any celebration is dessert, right? 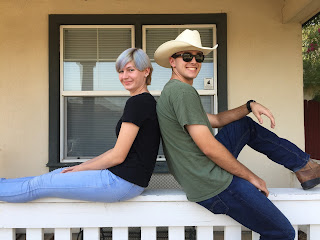 This summer has been really neat in an unexpected way for me.  Brianna and Eli both have "special friends" this year, and I've been privileged to get to know them a little bit over the summer.  Brianna's "Boy" is a polite, funny, wholesome kid, and Eli's friend is just adorable.  (Eli is in a no pictures phase these days, so while I do have some photographic evidence, I'm not permitted to share it with you.  Trust me, she's adorable.) 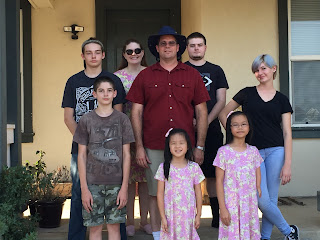 Boy took this picture for me while we were all in the same place at the same time.  It's a shrinking group, this household of mine. 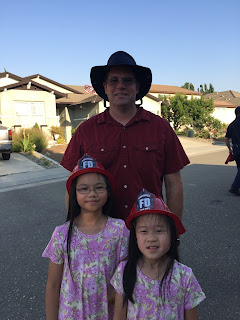 Does your neighborhood do Neighborhood Night Out?  The ambulance came and passed out fire helmets at ours. 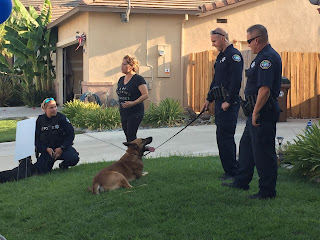 We also had several police vehicles, including a couple officers that Brianna and Eli knew from volunteering for Safety Town.  My heart glowed when one of the officers said, "I just love your kids!" and meant the teens.  I hear it about the little kids often, but it's pretty special when someone says it about your teenagers. 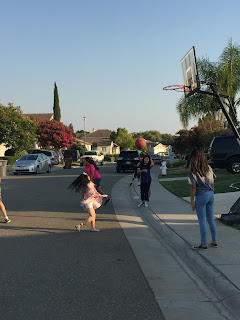 So many things about this picture.  1) this is why my girls always wear bike shorts or leggings under dresses.  Always.  2) there were about 3-4 older Asian girls playing around and they included Katie and let her throw and throw and throw and throw that basketball.  Even though it never went in.  Made my day.  I love the diversity in our community.  (And the peaches our Middle Eastern neighbor sent home with me, OMIGOSH, I'm going to have the girls draw thank you pictures for her.  They're so so good.)  3) Katie and Hannah are different from each other.  It's finally starting to show.  I know, I dress them alike, and that probably isn't such a great idea all the time; we all have our issues.  But when given options, Katie decided to stay outside, in the heat, with Daddy nearby, while Hannah gladly came in the house with most of us who decided we were too warm. 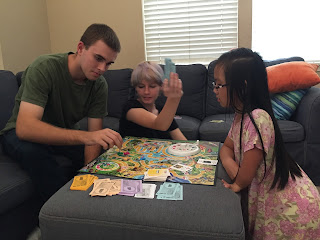 Bri, Boy, and Hannah played Life, and it was fun to watch them. 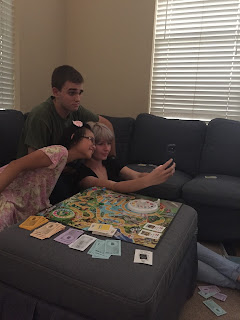 Boy has a nicer phone than Bri, so she stole it for some selfies. 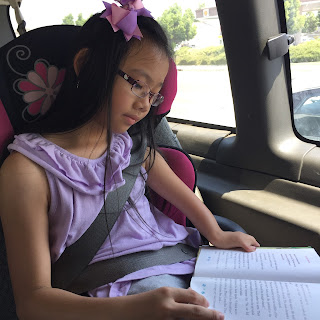 We made it to the library this week!  Huzzah!  I had a couple books to pick up, and Jack's hold on Salamandastron (another book in the Redwall series) had finally come in. 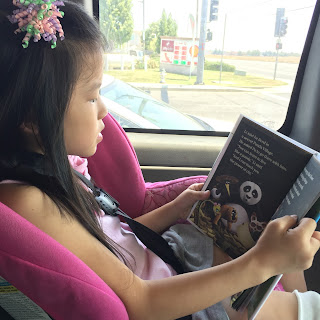 Katie usually gets 5 books from the "readers" section, and finishes them in a day, but Hannah not only read all the chapter books she picked out for herself, but also Katie's books, and the chapter books I picked out for Hannah in a single day.  I was a voracious reader as a kid, too.  I need to make more of an effort to get us to the library weekly.  Despite the fact that we have 9 bookcases within a stone's throw of my computer, she's pretty much read everything appropriate for her age here. 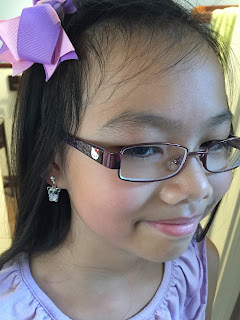 Notice anything new?  Hannah got a pair of panda earrings.  She's 10, which is old enough for pierced ears at our house, but with only one hand that can reach her ears I wasn't sure how that would work out.  I asked her if she wanted to get her ears pierced, and she said no immediately.  So we decided to try clip on earrings.  This seems to be the perfect solution for her.  No holes, and she can do them all by herself. 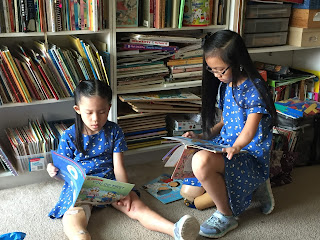 It's great that she picked out panda earrings, since those will go with so many outfits she already has, like these panda dresses. 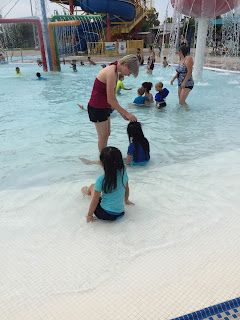 We finally, finally made it to the pool! 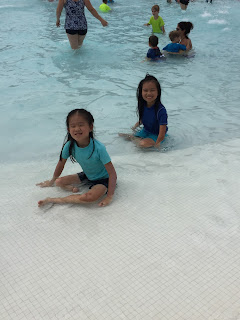 It was only for a couple hours, but that way nobody got sunburned.  Katie had fun for the first little while, but then she was cold, and sort of over it. 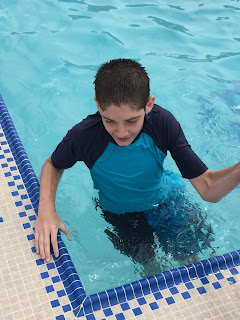 Jack has been coming to this pool his whole life.  Now he's all big goes off the diving board and does laps in the big pool. 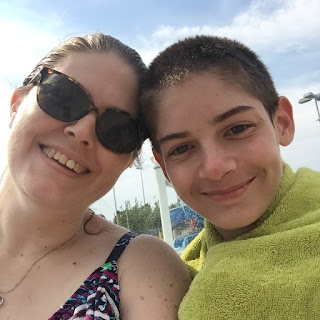 This is going to be such a year of change for him!  I look forward to seeing new growth. 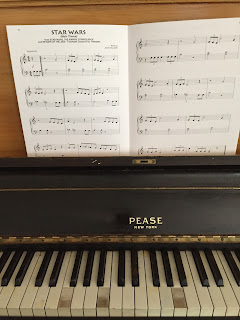 Speaking of new growth, now that Jack has mastered "Happy Birthday" on the piano, I thought maybe some Star Wars sheet music might inspire him to expand his repertoire.  I'm hoping to get him into lessons at the school, but I don't have the info yet, so we'll have to see if it's going to work for us or not.

Feeling like time in the hourglass is running out as the last grains of summer trickle by on the calendar.  On the one hand, it will be good to get our new routine established, and the known is rarely as bad as the fear of the unknown.  On the other hand, I'm going to miss everybody!