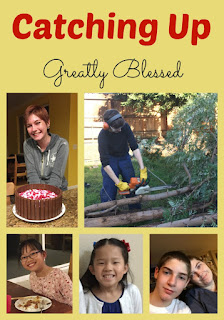 February is slipping away from me, so here's a "photo dump" post of what's been going on in our lives. 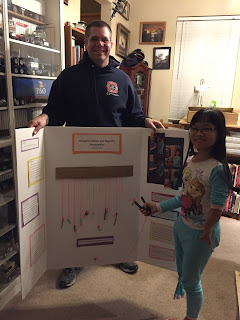 We survived the Dante's Circle that is Science Fair.  The night before found Paul helping Hannah and me helping Jack. 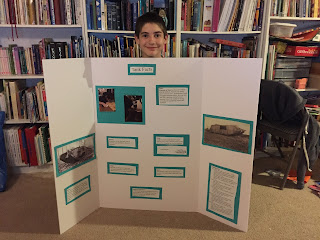 I believe Brianna did some proofreading and editing for both of them before we got to the display board part of the deal, too.  It was a family affair, and I feel like I earned part of that grade. 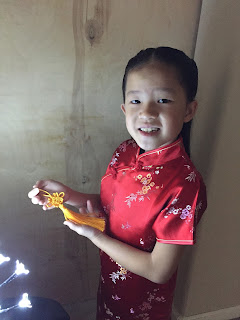 I know I already showed pictures from our recent photo shoot, but there were a couple more that were on my cell phone instead of the big camera. 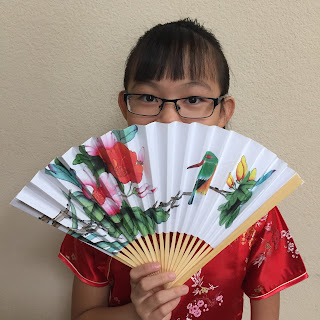 They're adorable, and they really were good sports about the whole thing. 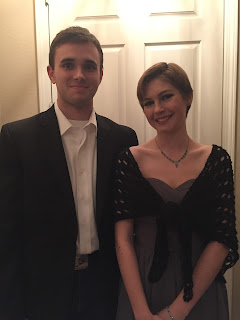 Brianna and Boy before the Sadie Hawkins dance.  (Miss Adorable was in Hawaii for a wedding, and Eli chose not to go without her.) 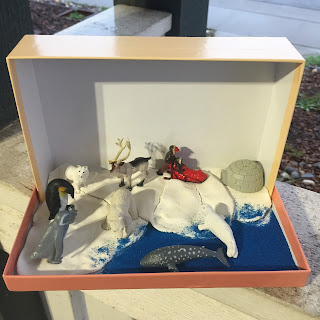 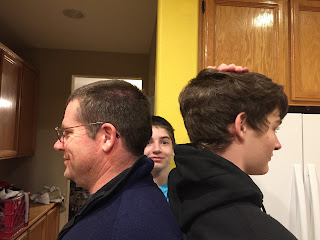 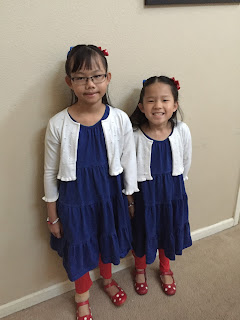 After 14 years of PURPLE and GOLD as our school colors, it's kind of nice to have something different for the younger kids (although purple is my favorite color). 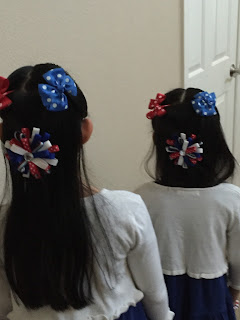 They had to dress in red, white, and blue for one of their recent spirit days. 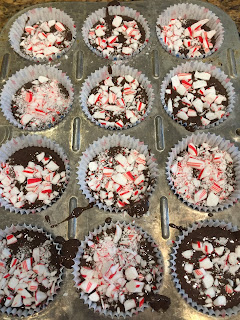 After school snacks, instituted this year, have been immensely popular with everyone (and Sam is annoyed to have missed out on this particular institution!).  Mostly muffins, sometimes cupcakes or cookies.  Josiah has been baking chocolate chip cookies when I don't get around to making something, which is very helpful and appreciated.  This was using up the last of the candy canes on chocolate mint cupcakes.  They were ugly (but tasty) after baking. 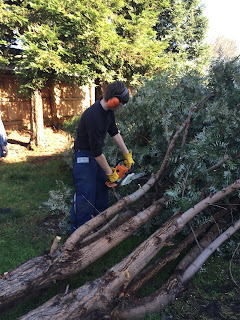 Yes, my 16 year old is wielding a chain saw. 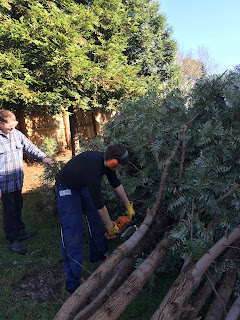 I actually love it when Paul teaches the boys real life skills.  Note he is wearing hearing protection, eye protection and "chaps." 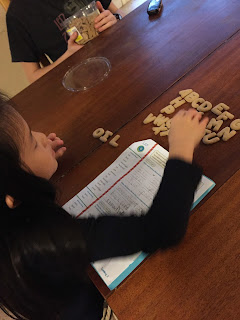 Homework:  I have to admit, it's not as bad as it could have been.  I remember when Josiah and Sam went to kindergarten.  Paul and I hated the "homework packet" that came home every week.  Thursday nights when we tried to catch up on everything we hadn't finished really sucked.

Katie's teacher asks the kids to study their spelling words, but leaves it totally up to parental discretion HOW that takes place.  We've done spelling words on a white board, with letter tiles, with blocks, written in pencil on lined paper, written with markers on construction paper, sidewalk chalk, etc.  Probably the favorite, though, is making spelling words out of Trader Joe's letter cookies. 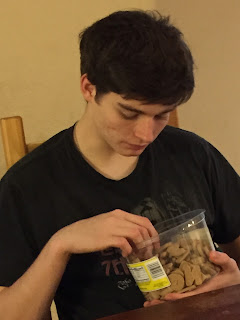 Eli even "helped" her find the letters, eliminating pesky extra Qs and Vs and such. 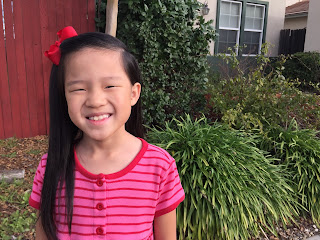 I belong to Facebook groups for families with kids from the provinces that Hannah and Katie were adopted from.  Recently Katie's province group put together a search video, hoping it would go viral in China, and that families who've given up a child would come forward for genetic testing so matches could be made and communication could be opened up.  The photo above is the one we submitted of Katie to be included in the video.  The finished video is below.


Because of this, we took another big step recently: 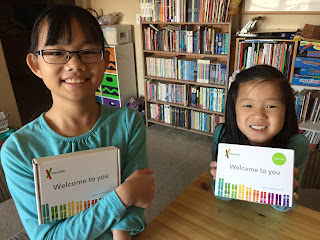 Spit testing with 23 and Me went better than I feared it might.  We are awaiting results (which usually take 6-8 weeks). 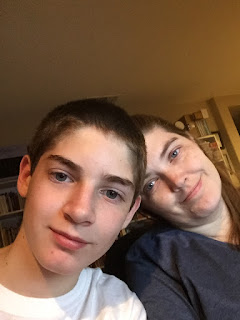 Speaking of genetics...  no denying a resemblance there. 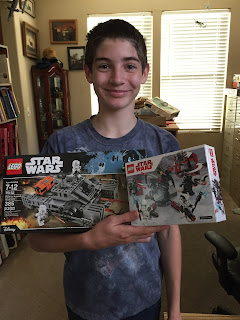 Jack and I recently made a run to Toys R Us so he could spend his Christmas gift card from Grammy.  As you can see, he's still into Legos. 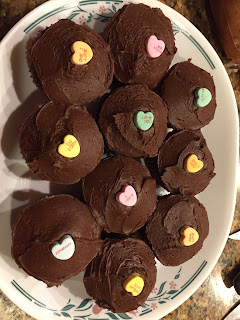 Valentine's Day is a birthday in our house, but Someone did not want a fuss this year. 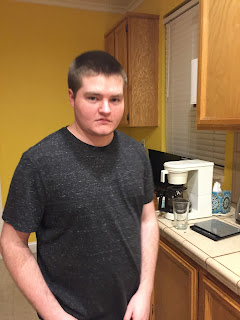 So no flaming cake picture of this guy, who is now a grown up, grown up. 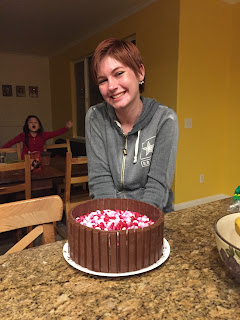 The day after Valentine's day is also a birthday!  Brianna turned 18, and wanted a cake surrounded by Kit Kats and covered with peanut butter M&Ms.

If you notice the walls behind Josiah and Brianna, they're a different color now.  They used to be a nondescript beige.  I wanted a warm, soft yellow.  What we ended up with... well, Eli refers to it as Ramen Seasoning Packet Yellow.  It's like being in an inside out taxi. 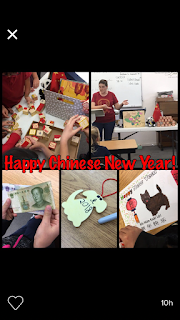 I totally stole this photo off Class Dojo, which is an app the school uses to facilitate communication between parents and elementary teachers.  I went to the school to give a little lecture about Chinese New Year to Hannah and Katie's classes.  I brought along visual aids, a craft, and a coloring page.  It was fun!  I had a great time teaching again, even if it was only for an hour.  I also left a bunch of our China books at the school for the kids to enjoy during the 2 weeks of Chinese New Year, and I've enjoyed seeing pictures of the kids reading them. 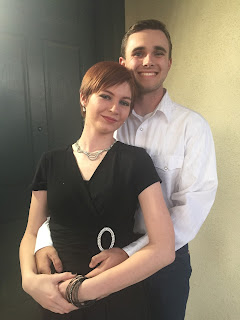 These two went out to a fancy dinner celebrating both Brianna's birthday and their one year anniversary together. 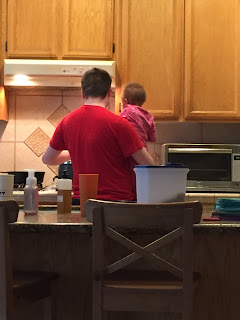 I got to babysit for a friend of mine, and it was so fun to have a toddler in the house again!

I think I've figured out another part of why I'm not blogging as much any more.  Obviously, the biggest reason is that I don't have all the homeschooling stuff to talk about anymore.  But I used to spend a lot of time on my computer in the school room, while the kids were doing school work.  Now, I'm really only in there a couple times a week.  I keep thinking, "Maybe I'm done blogging."  But I guess it's just that my blogging has changed.  Again.  I have a trip planned next month, so I'm sure I'll have some vacation pictures to share later.