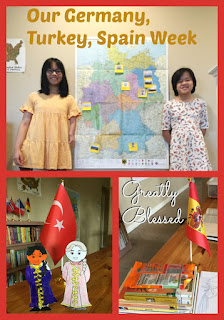 Somewhere around the start of the school year, we sent off letters to the embassies of all the planned countries we would be learning about (I did not have the foresight to anticipate adding several extra countries along the way).  Mexico was the first to respond, but we'd already finished Mexico by the time their little packet got here. 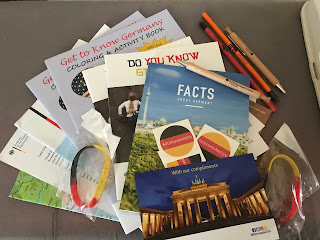 Germany went all out, sending us this array of goodies.  Josiah swiped a bracelet, Brianna swiped a pen, I gave the girls the color change pencils the first day we started Germany.  But the coolest thing in the package turned out to be... 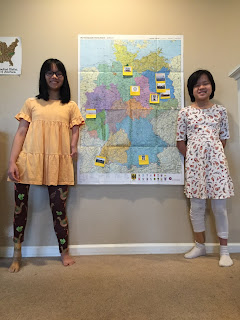 ...this wall map!  It's actually double sided, with the political map on one side and the physical map on the other.  We used it to locate some of the highlights we learned about in Germany, including the Black Forest, the Berlin Wall, the Elbphilharmonie, Neuschwanstein Castle, a Cold War era listening post, and a Volkswagen plant.  Oh, the former blimp hangar that they turned into a water park.  The girls thought that was pretty cool, too.

We've also received a package from Australia, so we have something extra to look forward to when we get there.  One of our group members posted the package they got from China recently, so I'm cautiously optimistic about that one, too. 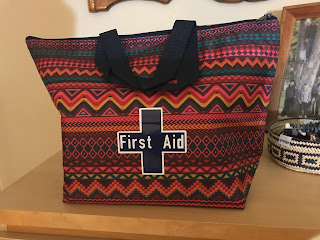 A friend was having a Thirty One fundraiser, so I bought this bag to turn into a first aid kit for (minivan) Matilda.  I felt like the colors would go nicely with her burgundy paint.  When I cleaned out the big, white van to sell it, I realized my first aid kits were hopelessly outdated.  Old, gross band-aids, expired meds and creams, basically not what I wanted to have in my new car.  I reorganized, purchased some fresh items, and was carrying it all around in a green plastic grocery bag.
When the bag arrived, I fired up Crikey to make the sticker for it.  Now, when I open the back of the van, instead of thinking, "I need to do something about that," I smile. 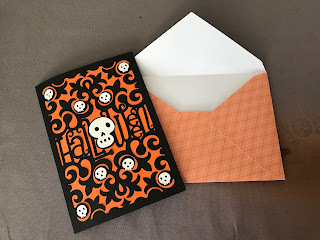 Speaking of Crikey, I forgot to show this card that Brianna made last month.
This week, I found myself thinking I should make some Christmas cards to send to the adult children in their various far-flung locations.  In Design Space, most of the card ideas had either the new Cricut foil (which looks amazing, but I haven't tried it yet), or metallic or glitter papers or sparkling cardstock, which I don't have.  I finally came up with a design that I have all the supplies for, but I haven't actually cut anything yet.  I'm finding I have a lot more ideas than follow through. 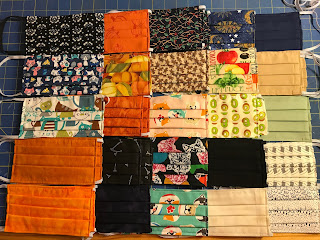 On the subject of follow through, I did finish up some more masks recently.  There wasn't a big demand for Halloween masks, so I'm stuck with a few outdated left overs.  I've started on Christmas masks, since they're already cut out, but I suspect I'll have the same issue there.  People are tired of masks, and since commercially made masks are available everywhere now, people aren't buying hand made ones any more.  There's a shoe company that was collecting home made masks and giving out generous coupon codes to people who sent them in, so I did turn masks into shoes at one point.  I imagine I'll end up donating some to our local food bank. 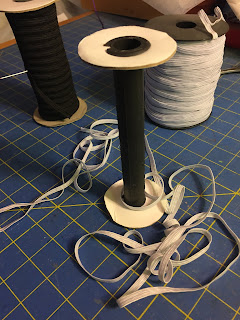 I finished a roll of elastic.  Fortunately, I have plenty of both black and white elastic on hand now.  Crazy the things that we've run short of this year.
This week, we left Germany for Turkey! 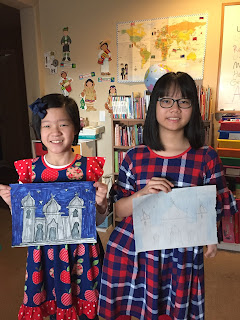 We used the instructions from Art Projects For Kids to draw mosques.  Hannah's is in colored pencil.  Sorry, I meant to get a better picture of it later, and it slipped my mind.
We saw mosques, complete with whirling dervishes in a couple of the videos we watched, which was really interesting.  Although the girls like the Nat Geo Kids' Are We There Yet? series videos on YouTube, they're geared toward a younger audience.  The Rick Steves travel episodes are aimed at adults, but pretty easy to follow for the most part.  Probably the most interesting has been the Europe From Above series on Disney +.  In addition to Europe, there are also episodes on India and China, which we're looking forward to watching when we get to those countries.
I also discovered that we like Turkish music.  In each country that we "visit," I use YouTube to play the national anthem, and then as we're doing other schoolwork, I often have instrumental music from that country playing in the background.  This has given us exposure to a lot of different sounds this year! 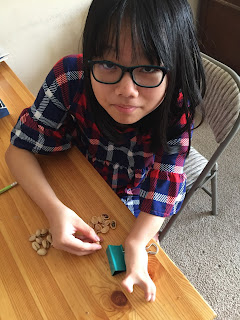 For one of our Turkish snacks, I introduced the girls to pistachios while we watched a documentary about this fascinating country.  We came up with a large binder clip for Hannah to use to pop open the shells on her own. 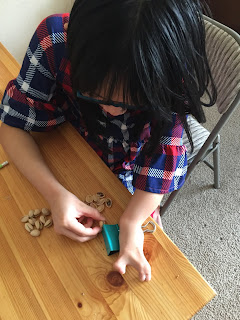 Both girls really enjoyed the pistachios.  I've always felt they were more trouble than they were worth, but it was fun to have something different.
I did stop at the local Indian market to see if they might have Turkish delight or baklava.  Yeah, no.  I knew it was a long shot, but I know sometimes the little markets have more than one theme country.  We'll definitely head back there when we study India! 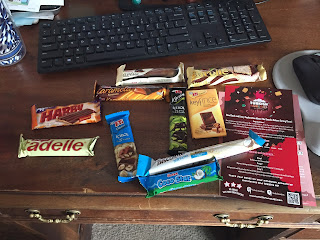 As a treat, I splurged on a package of Turkish candy bars from Amazon.  We had fun guessing the ingredients and sampling various flavors.  The dark chocolate with pistachios was really yummy, but had a slightly greasy aftertaste.  I skipped the coconut ones, but there was something for everyone in this box. 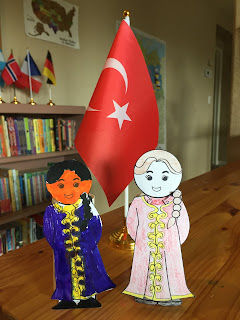 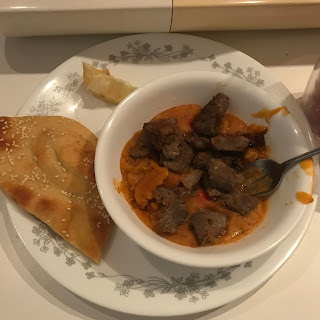 Since there was no Eat 2 Explore box for Turkey, I used a couple recipes out of a library book to make a Turkish meal.  This was so good!  Josiah said it reminded him of the meal we had at the Moroccan/Lebanese restaurant in Hawaii a couple years ago.  It's lentil soup, lamb, and flatbread with sesame seeds, served with cherry juice.  I had seconds, and I saved the recipes.  Totally going to make this again. 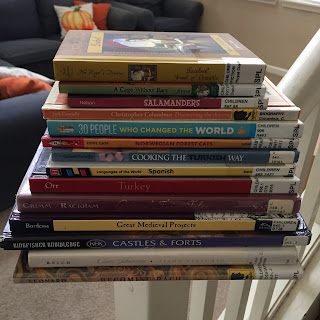 Books, books, and more books.  We go through scads and scads of them.  I'm very grateful our libraries have found ways to keep operating safely. 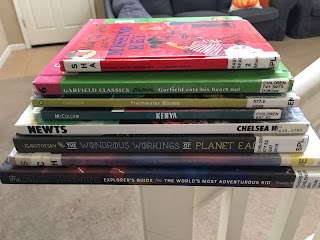 One day, I dashed out to pick up some books, including one I was waiting on for a specific school project, and I forgot my phone!  Ack.  Hard to curbside pickup without the ability to text. 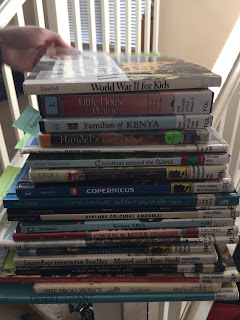 I masked up, dug out my library card, and went to the door.  One of the librarians I've never seen before came and opened it, and I stepped back and explained my predicament.  "What's your last name?" she asked.  I told her.  She immediately knew what my first name was.  I didn't know whether to be proud or embarrassed. 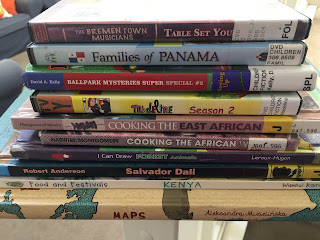 All the Thanksgiving books for kids are reserved or checked out, so I put some Christmas books on hold.  Hard to believe we're that close!  I need to finish up my shopping and get stuff in the mail.  No "I'll Be Home For Christmas" from any of the adult children this year. 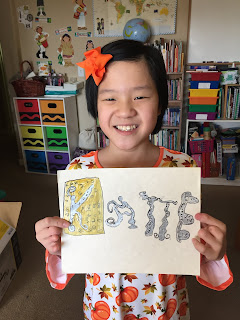 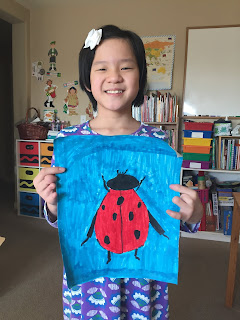 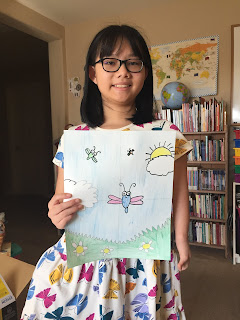 I printed a variety of buggy options for them to draw. 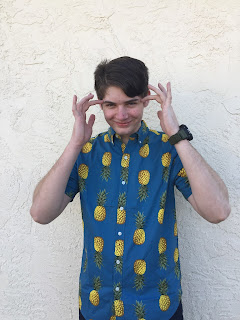 Any Psych fans out there?  This is Jack's favorite show, and since there's a pineapple in every episode, when we were looking at shirts for picture day, this was what he chose. 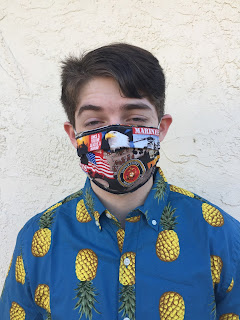 2020 face
School pictures were this week, so I took Jack to campus and he jumped in between the preschool and the 3rd/4th grade class. 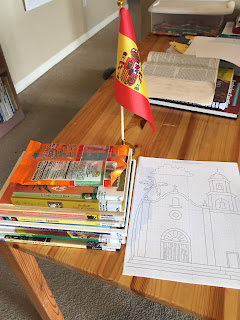 After 2 days in Turkey (which felt like not quite enough!) we meandered over to Spain for the last 2 days of the week. 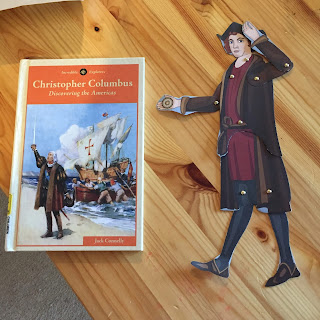 Since we didn't acknowledge Columbus Day this year, studying Spain gave us a good reason to review Columbus and his voyages, since Spain paid for them.  Bendy guy from Famous Figures of the Renaissance.  We discovered bendy guys 4 years ago, and we're still using them! 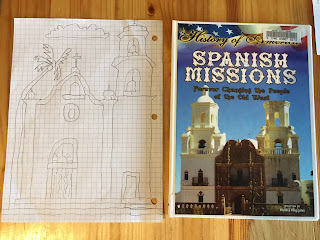 We've been to several of the missions along our coast, but we've always viewed them in light of California history.  This time around, we looked at the missions through the lens of "this is something Spain did." 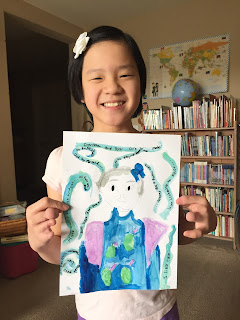 Self portrait project from one of the French artist books
We're all done with Europe and moving on to Africa!  MFW has us spending 3 weeks in Kenya and then going on to Asia, but we'll be bouncing around other African countries to learn as much as we can about the Dark Continent while we're there.  As an adult, I really notice the disparity between how much white history we teach and are taught, versus how much non-white history we're exposed to.  I think public schools are doing a much better job of evening things up nowadays, but Christian schools and Christian homeschool publishers seem to be late to the game on this issue.  Parenting children of color has made me less dismissive of "political correctness" in this area.  I look forward to learning more about the various countries of Africa alongside Hannah and Katie.
at November 21, 2020