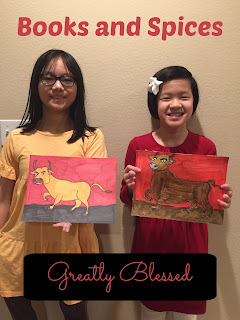 Normally, we just power through most holidays, except Christmas, but I'm feeling like we'll be taking Martin Luther King, Jr. day off, at the very least, and depending how things go, we might do a light week next week.

We're already 111 days into our school year, so we could totally skip a week with no repercussions.  I'm just sort of feeling like focusing on other things right now. What better way to start off our week than with a new stack of books?? 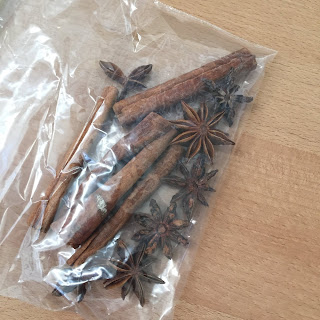 The Fallout cookbook was a special request from Josiah, which prompted us picking up several new spices.  We also spent 90 minutes in the grocery store, hunting down obscure ingredients.  We ended up having to order browning sauce from Amazon, since the staff said our store has been out of it for months. 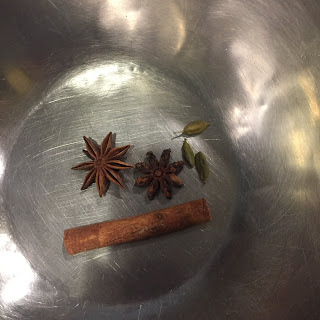 Kind of fun that this coincided with our study of India, known for it's spices.  We're supposed to have done a turmeric science experiment over a week ago.  I finally bought the turmeric, and it still hasn't quite happened yet.  I think we need a couple more days to fully finish India up right. 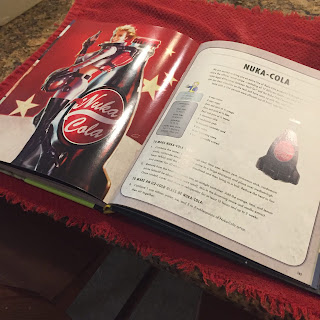 Josiah made several recipes from the book, to create a whole meal, including a drink. 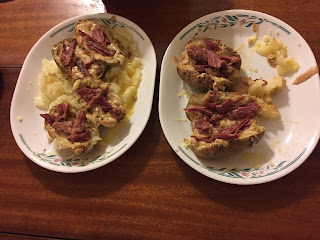 Stuffed baked potatoes with corned beef and a horseradish/dill sauce. 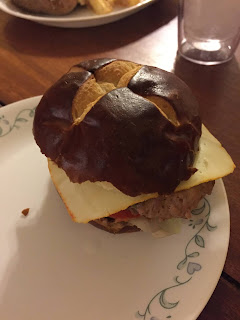 Burgers on pretzel buns, with sauce made using the cola recipe.  We did substitute muenster cheese for swiss, since I'm not a fan of swiss, and Josiah doesn't like cheese at all. 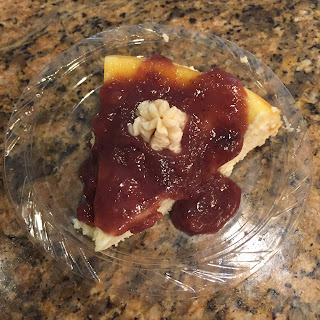 Cheesecake with strawberry glaze.  I got to teach him how to fill a pastry bag, and how to pipe a star.  Since it's not often I get to teach my big boy anything, this was fun.
I also showed him how to put air in the tires this week, since Matilda [the minivan] doesn't like the cold, and often tells me one of the tires is low if I leave the house while it's cold.  She's a little bit of a diva. 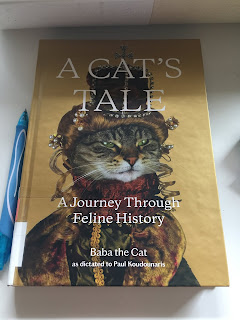 I finished reading my second book for this year.  A Cat's Tale - A Journey Through Feline History was a cute book.  It was heavy, physically, since the pages are glossy, and there are lots of pictures of this cat in various costumes.  It starts in Egypt, and tells stories of cats from then forward, eventually ending up in the United States.  The book mentions Dewey, and it reminded me to put the kids' version of the Dewey book that I read last year on hold at the library for the girls. 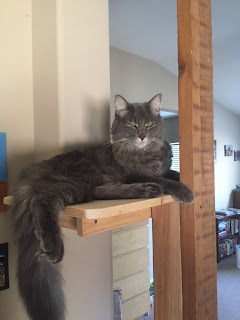 Speaking of cats, this pampered feline got a new perch from which to disapprove of us.  It's between my sewing room and bedroom, in the master suite, where he hangs out the most. 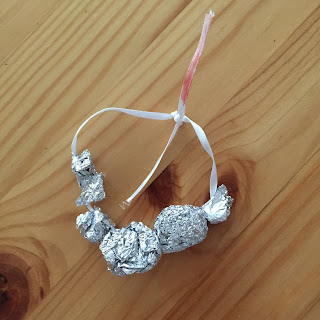 This was a project Hannah did from the Cattastic Crafts book.  It... had some hiccups along the way. 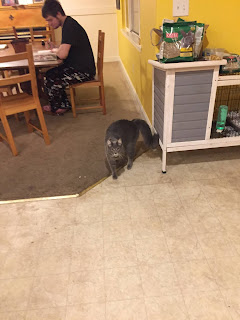 I was trying to get a picture of Grumman playing with this new toy, but, well, he's a cat.  So, what we have instead is a picture of Josiah, making the grocery list for his video game meal.  With a fluffy photobomber.
Speaking of felines, we watched a documentary about Leopards on Disney +, and the girls watched Secrets of Wild India.  Aside from some evolutionary content, they were pretty good. 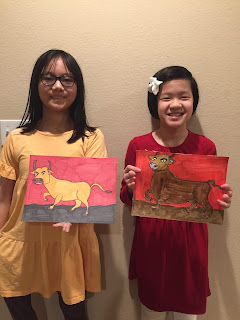 We're currently in the tail end of Year of the Rat.  The next year coming is Year of the Ox. 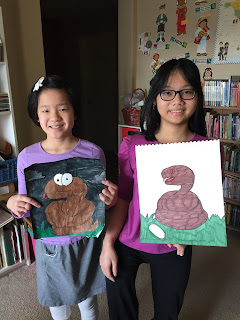 The girls haven't noticed the pattern yet, but I've been having them draw Chinese Zodiac Animals this week. 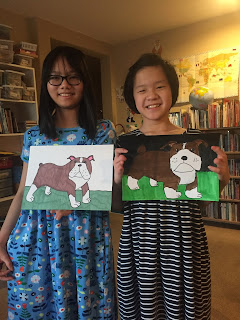 With 12 animals, I figured we'd use the last week of India, and still be able to finish all of them while we're learning about China. 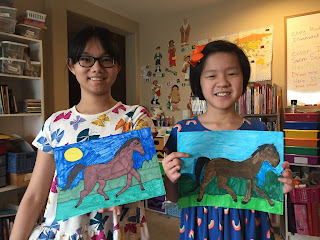 I think I might have them do a small version of all 12 together at some point.  Maybe as a library bag. 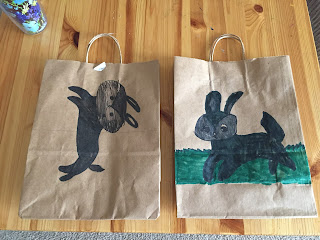 Sigh.  Can you tell the guide paper was printed landscape? 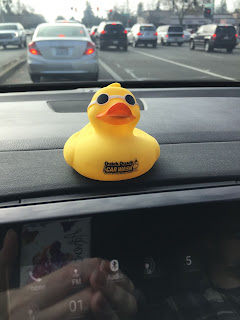 Tuesday was Rubber Duck Day.  We got a free duckie from the car wash.  It's the little things that make me happy. 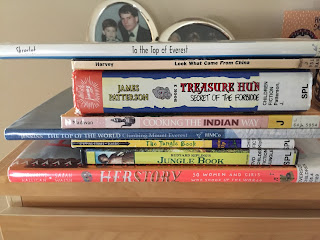 More books.  Starting to set aside China books for when we get to that. 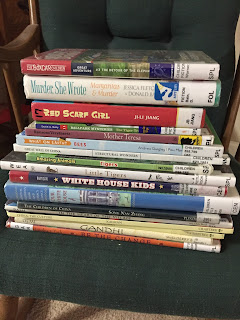 Also got a couple of books about the White House, as this seems relevant to current events.  We don't watch the news on tv, so the girls haven't heard anything about the storming of the Capitol, or the coming inauguration worries, but it seems like a good idea to give them some additional civics knowledge at this point. 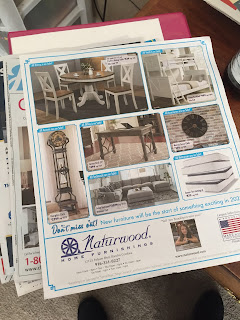 We did some more "real world math" using furniture ads.  I asked the girls to pretend they were setting up their first apartment, and choose the furniture they would need.  The next day, I asked them to make a list of at least 10 (non-furniture) things they would need.  The resulting discussions were really eye opening.  I had to explain a lot about what comes in an apartment and what doesn't.  I ended up drawing on the white board the floorplan of my first studio apartment with all the provided amenities in brown, then using the orange marker to fill in furnishings that I added to it.
One of the girls said she wouldn't need a dresser; she'd just keep all her clothes in the closet.  So I asked if she had hangars on her list.  Then I asked if she was planning on hanging socks and underwear and pajamas.  We talked about laundry rooms and the need for a laundry basket or bag, so you don't drop your underwear in front of your neighbors.  We talked about all the different types of soap you'll need to buy.  We talked about the different types of towels they'd need.  They knew they'd need beds, but neither had sheets, blankets, or pillows on their list.
This project was a little disheartening to me, with questions like, "Do I have to buy a bathtub?" and "Doesn't a house come with a table?"  Hopefully, this helped them begin to understand what various items cost, and the things they'd need when they're on their own someday. 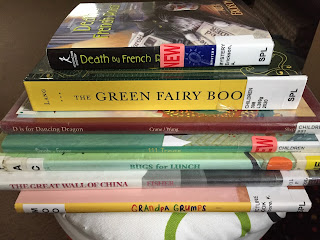 More books.  I'm feeling a little bogged down in books right now.  The last couple of times we've gone through the pile to sort out which ones we're ready to return, there were a lot of books that one girl read but the other hadn't yet.  Hopefully lots of reading will occur over the 3 day weekend, and we can get down to a manageable number again. 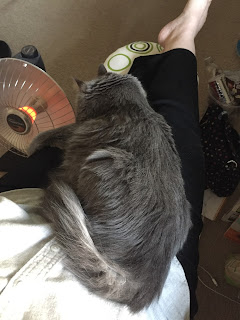 I recently said that Grumman is not a lap cat.  But he's a contrary beast, and so, one day while I was eating lunch with my feet up in front of Netflix on the iPad, he came over, looked up at me, hopped into my lap, and settled down to melt into the space heater with me.  He stayed longer than I expected. 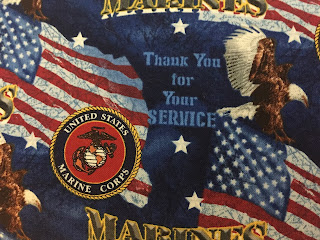 I sewed!  I recently showed some masks on Facebook, and had requests for more Valentine and Shamrock masks, so I went to the fabric store to pick up heart and St. Patrick's Day prints.  I saw this USMC fabric and had to get some for my favorite Marine. 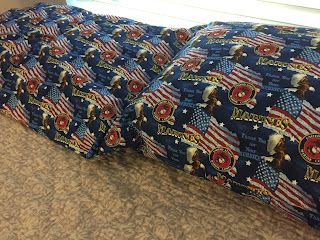 I made pillowcases, and I was rather pleased with myself for making one open on the left and one open on the right, so the words are up on both when they're next to each other on the bed. 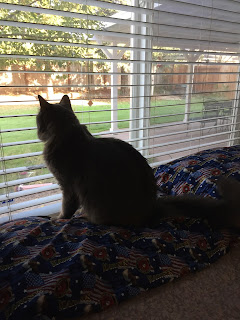 Getting the room ready for Sam, I put the pillows on the bed, and Grumman immediately hopped up and asked me to open the blinds.  He loves windows, and will pat the blinds and look at me to open them for him.  Hoping Sam doesn't mind a little cat hair. 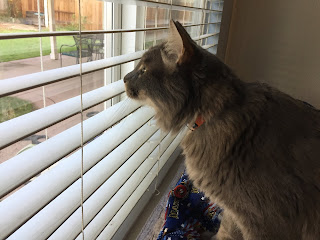