Our What Day Is It? Week 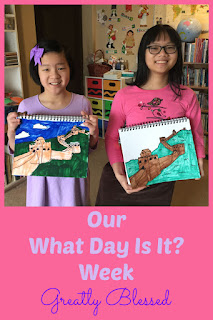 Because last week was not a regular week for us, the day of the week and the day of our curriculum are not currently in alignment, and it's making it even harder for me to know what day it is.  So tomorrow is Monday, but we'll be working on Wednesday/Thursday stuff.  No worries.  Fridays tend to be light days, so I'm sure we'll adjust to synch up with the correct days soon. 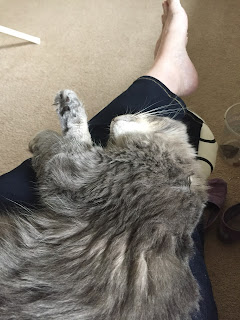 While I still wouldn't call Grumman a lap cat by any stretch of the imagination, he does deign to grace me with his presence occasionally.  Generally when I'm cozied up to the space heater, but sometimes just because.  I'm hoping this is a glimpse of what he'll be like as an old man.  He's still plenty feisty most of the time. 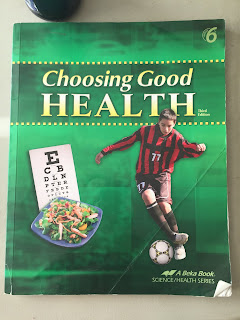 I forgot to mention earlier, we finished 2 books roughly around Christmas break.  One was our Health text, which was a pretty thin book, with only 7 chapters. 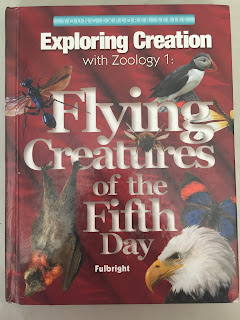 The other was Flying Creatures.  I had lofty ambitions that we were going to become avid birdwatchers because of this book, but smoke and fear and cold have kept us indoors more than I care to admit.
We've moved on to Swimming Creatures now.  I wish we could do a field trip to the aquarium while we're in this book, but field trips just aren't a thing now. 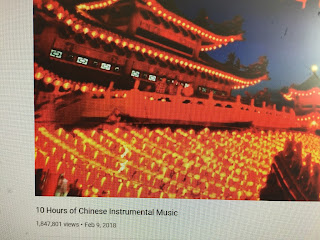 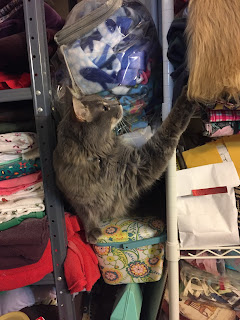 Grumman stuffed himself into a crevice in the sewing room and was very curious about the fake fur that I bought to make gnomes when we studied Norway.  Somehow, we never got around to actually making them, so the fur hangs there, reminding me of my over ambitiousness/lack of follow through.
Perhaps at some point, I'll have a project that needs fake fur, and be glad to already have it on hand.  Or, my kids will shake their heads at silly old mom as they box up the sewing room after I'm dead.  It could go either way. 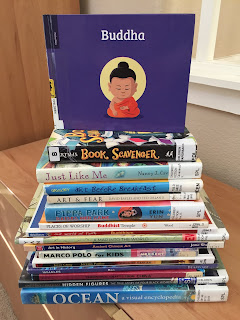 We survived the week with our local library branch closed.  I'm looking forward to it opening up again (just for curbside) on Tuesday. 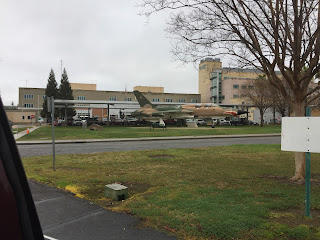 Hmm, I should have cropped this.  If you've ever been on a military base, you know there are often outdated pieces of equipment "sprinkled" around as décor.  Our family calls these sprinkles, and when I took Sam to the VA this week, I snapped a picture of one that we saw to share it with Eli and Jack. 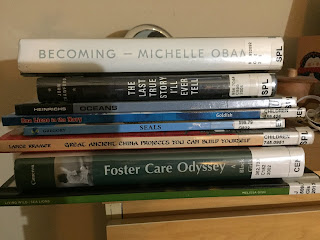 Between having our branch closed, and books undergoing quarantine upon return, our library account is pretty scary right now.  There are currently 115 books checked out to us, although I know we've returned at least 3 bags that have not yet been checked back in.  Since the "limit" is 60, I'm a little afraid of getting cut off the next time I go to pick up more books. 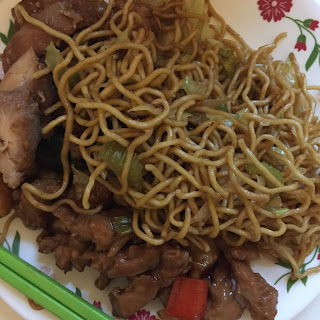 I picked up a Family Meal Deal and a free kids meal from Panda Express one day after picking Josiah up from work.  Hoping to score Chinese food a few more times while we're studying China, and then we'll roll straight into Chinese New Year, which means more Chinese food!  Yum! 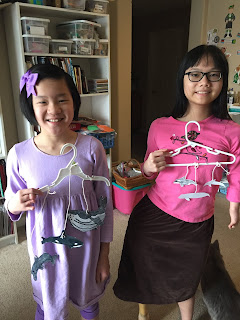 The girls made whale and dolphin mobiles from their Swimming Creatures book. 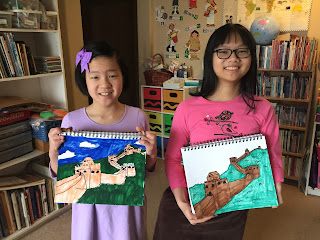 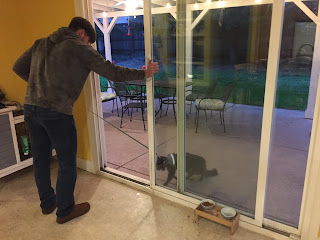 It's chilly out there!  Sam wanted to come back in before Grumman did. 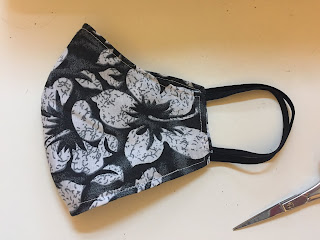 With Josiah working [Hallelujah chorus], he needs to mask, obviously.  He's pretty picky about what he'll wear, so a few months back, I made him a special mask from a different pattern than the pleated ones I've been churning out (737!) all along.  We tweaked it until it was Just Right, but now it's time for Goldilocks to have a couple more, so I made two for him in this Hawaiian print.  My camera shy boy elected not to model them for posterity. 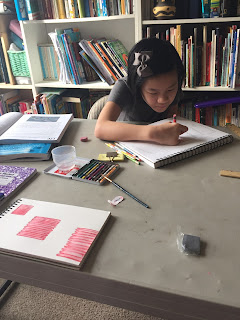 I introduced the girls to a new medium in the art world:  watercolor crayons. 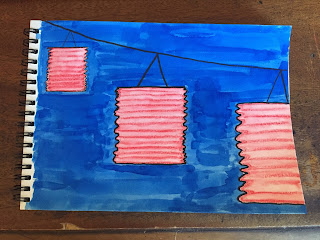 The red lanterns were done with watercolor crayon, the blue was done was done with liquid watercolor, and the sharpie was added after everything was dry. 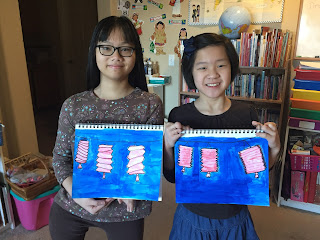 We have been doing so many of these Art Projects For Kids guided drawings that our markers are drying up. 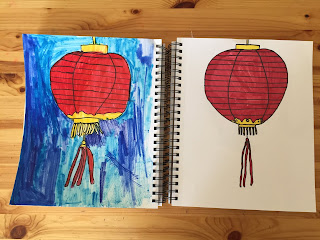 Katie mentioned being completely out of working blue markers, so I ordered a pack of art markers that's heavy on blues.  I considered getting a pack of blue Crayola markers, but I feel like the kids are old enough now to use real art materials.  Hannah has a nice set of Prismacolor markers that are almost used up.  I think it's time for me to suck it up and share my markers. 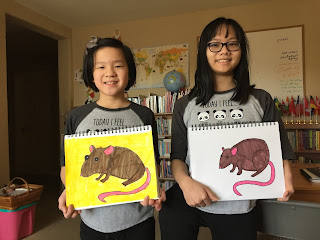 Back to our Chinese zodiac animals, rats. 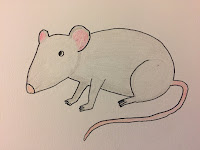 A friend on Facebook inspired me to be more intentional about being creative this year.  Instead of just assigning art, I want to make things, too.  January has gotten off to a good start with 5 Crikey projects, 5 days of mask sewing, 3 pillowcases made, a little paint pouring, and some drawing. 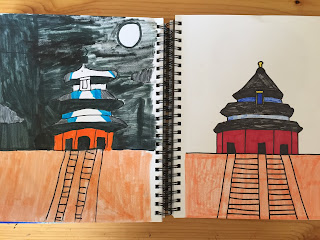 Temple of Heaven, on which happens to be the obverse side of the panda coin Brianna gave me for Christmas.  We saw it from a distance in China, but didn't visit it. 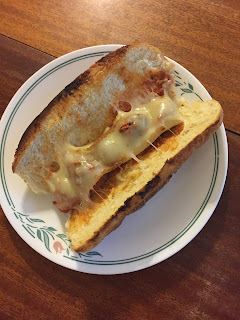 Another of Josiah's cooking projects was meatball sandwiches.  I absolutely love that he's on a cooking kick lately. 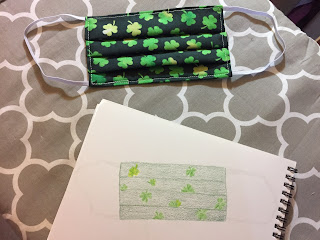 To go along with my wanting to art more (can I use art as a verb?) I picked up a book called Art Before Breakfast, and it talks about keeping pen and paper close and using random moments to draw.  I am more comfortable with colored pencil than pen right now, so I'm thinking about getting a little pouch to cart my supplies around in.
Last night, I sewed a few masks, and then I paused for a bit to draw one of them.  It's hard to see the "white" elastic loops, and I only drew a few of the shamrocks, but it's recognizable.  I'm looking forward to seeing what else ends up in my little sketch pad this year.
at January 31, 2021