Good news at Shriners this morning!  Better than I even hoped for! 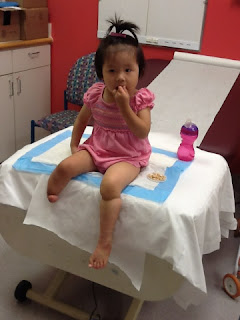 Cast free (and snacking) for a little bit.

Katie's weekly cast changes have been done with a PA, but today's appointment was with Katie's surgeon. When Dr. P. saw Katie's foot, she was very pleased with her progress and sent us upstairs to have her fitted for AFOs. One brace for daytime, which hold her foot in a walking position, and one for night time to hold it in an "over correcting" position, to encourage that heel tendon to lengthen on it's own. Yes, that's right, NO SURGERY on her heel at this time!!!  Dr. P feels that she's looking really good and we should try to get her up and walking and see how it does.

I am SO thrilled about this, as surgery on the heel tendon was always "a given" in previous discussions.  And, selfishly, I'm pretty excited about NO MORE WEEKLY CAST CHANGES, too.  Not that I mind doing them, it's just that I feel like we'll settle into "normal" life (whatever that is!) better once the medical visits die down a bit. 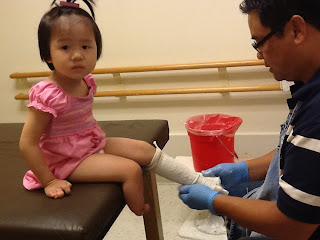 This guy is casting her to make her braces. The day one will be white and the night one will have pink and purple hearts on it.  (Autocorrect tried to capitalize "purple hearts" because it thought I was talking about Purple Heart medals. Silly autocorrect.)

She did NOT like having not one, but two plaster casts by this guy, and having her foot mashed into position for them. I had to hold onto her, so couldn't take any more pictures. After that, we went back downstairs to get her fiberglass cast on, and YIPPEE!! it's just a boot cast now, to hold the foot in place until her AFOs are ready next month. AND, she'll be able to walk on it (theoretically), after we pick up her prosthetic in 2 weeks for the other side. 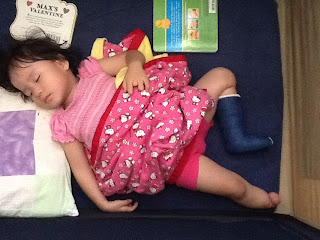 Dr P is going to still coordinate her surgery date with the hand doctor, as she will be releasing the band below Katie's knee. Originally, she'd said we didn't need to do it, since it wasn't restricting blood flow, but now she's saying, "While she's asleep, we might as well," which I'm pleased with.

Katie is now sloughing off 5+ weeks worth of dead skin on her knee and thigh in a reptilian shedding. Brianna said it looked like her carseat had dandruff on one side.  After naps, I'm going to scrub at her with a washcloth and put some lotion on her.  It will be interesting to see how she gets around now, after having her knee covered for so long.  I'm wondering if the skin will be sensitive.

Please take a second to click the box to the left for us.  One click helps keep us visible at TMB, which is a considerable source of our site traffic.  Thank you!
at August 16, 2013