At the end of the upstairs hall in our house, we have upper and lower cupboards, separated by a counter space.  Somehow, during The Great Room Shuffle, the counter became a horizonal stacking surface for everyone's unwanted stuff.  I suppose Flylady would call it a "hot spot."  I called it a freaking disaster area, and tried to stay away from that end of the hall.

Today, I tackled that area.  There is no "before" picture, because it was just too embarrassing.  But I will say that we took 2 trash bags of stuff out to the garage Donate Pile, and I put a stack of "Eli will grow into these eventually" up in the boys' closet, and I returned to Sam a few items that I thought he might not be done with, and I saved a box of former Jack clothes for Luke... so, yeah.  A lot of clothing. 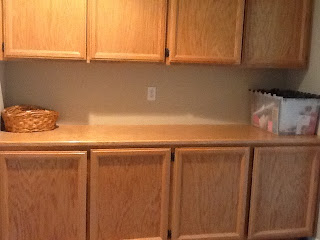 This is the "after."  Ahhh.  The basket on the left has random girl stuff in it, like razors and lip gloss.  The tote on the right is the last unpacked box from our move over a year ago.  I know what's in it.  It's random desk/school room stuff.  But the school room is full to bursting, and so this tote simply sits.  All things considered, I can live with that.

Also today, I worked on the school room a little bit.  Just enough so that we could work in there without piles falling over.

Here's my desk.  Normally, this is command central, but it feels very weird to sit there now without the computer. 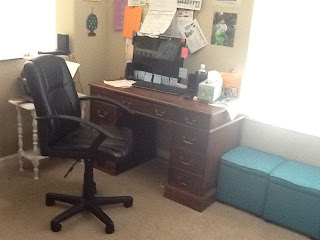 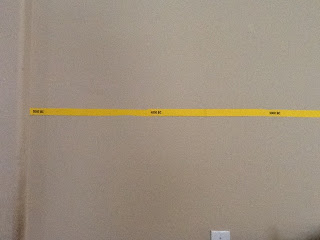 And here is the start of our time line.  I'm pretty excited about this school year.  Last year was geography and culture based, and this year is history based.  Being that I attended 2 different junior high schools and 3 different high schools, my history is fragmented at best.  Fortunately, I love to learn, and I'm very much looking forward to getting a chronological history of the world.  We are using My Father's World as our main curriculum for the second year now, and this year is called, Creation to the Greeks.  Should be fascinating.

As I mentioned, our computer is on the blink, so I sent it to the spa to rejuvinate.  I am hoping it comes home refreshed soon, as our math is computer based!  I'm sure the kids won't mind skipping a few days of math.  In the meantime, we'll do the fraction game and some flash cards.  I need to have Paul pick up a bag of M&Ms for flash card practice. 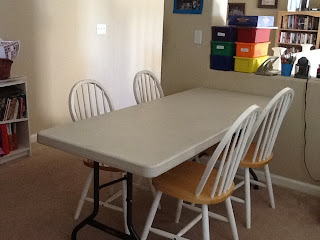 We switched to a table at the end of last school year, instead of having everyone at desks.  For starters, we didn't really have enough space for that many desks, and we also didn't have enough appropriately sized desks for all my students.  So the table solved some problems for us.

See the cute colored bins?  Those are going to be stocked with things to keep Katie busy while we do schoolwork.  In theory.  Blocks, counting bears...  I need to pick up some links, I think she would like those.  Maybe I can convince Brianna to let me put the pop beads in one, too.  Those would be some serious fine motor coordination builders for her.  Of course, if all else fails, we have crayons, markers, pipe cleaners, etc.