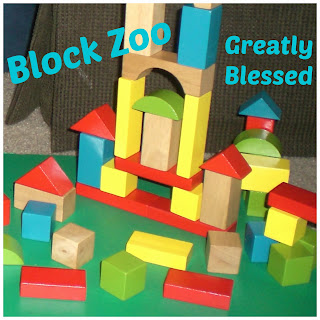 During Christmas vacation, when the kids started to get bored, I pulled out a set of new blocks 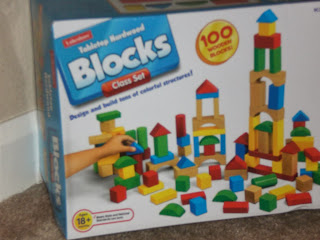 Eli later built a copy of the picture on the cover of the box: 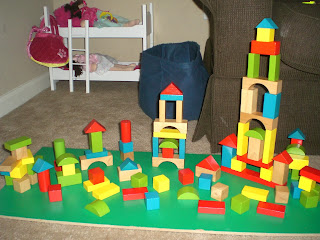 Now I don't often do the "directed play" thing.  I much prefer to let them do their own thing most of the time.  But the older kids had a game they used to play years ago, and I thought it would be fun to introduce it to the younger kids. 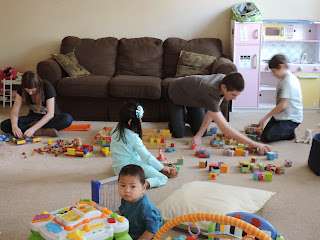 I told the kids, "Bring down 3 small animals, and meet me in the playroom." 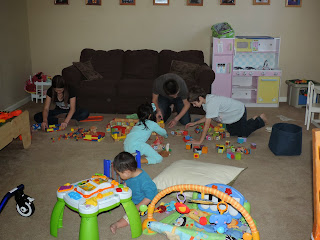 Then I got out all our blocks, not just the new set.

Several years ago, we gave away our accumulation of blocks to a woman who was setting up a daycare.  Somehow, we've managed to replace them. 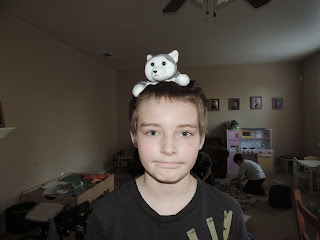 Most of the animals brought down were Beanie Babies

, but this game would work with any small stuffed animals or Safari Toobs

or whatever little animals you have around the house. 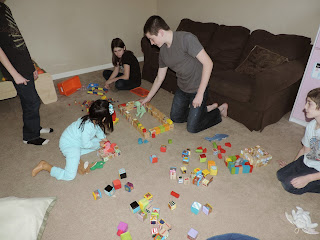 Then I told them to build a zoo for their animals. 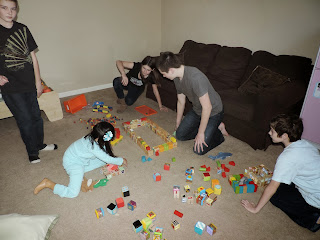 It's always interesting to watch the group dynamics and see who chooses what, and what alliances form. 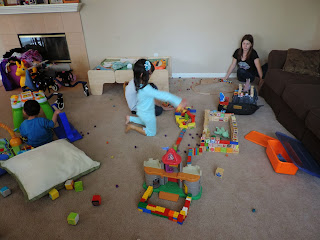 It was decided that Hannah's bear and Sam's bear could inhabit the same cage at the zoo. 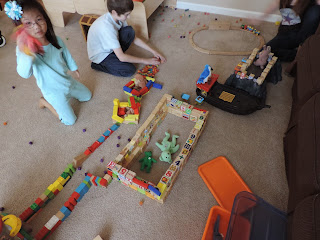 Hannah, after making an enclosure for her rooster, asked me, "Mom, what does this thing eat?"  She then tried to swipe some of Jack's little yellow blocks from his pathway to use as corn to feed her rooster. 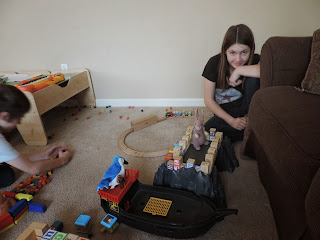 Brianna set up a zoo train and a moat. 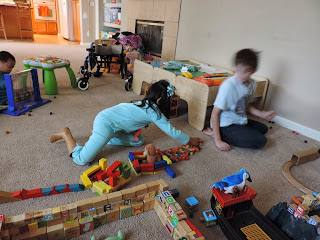 Oh, look, there's swiping.  Yeah, that didn't go over well.  She already had all the little purple blocks.  I wish I'd thought to suggest she trade some of the purple ones for some yellow "corn" instead. 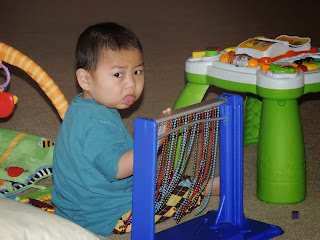 And what was Lukey doing during all this?  Rocking and tapping his beads.  He actually got a little lamby in his stocking, since the texture page he pays the most attention to in touchy feely books is the lamb one.  But he's shown no interest in the stuffed animal at all.  He's big on the familiar. 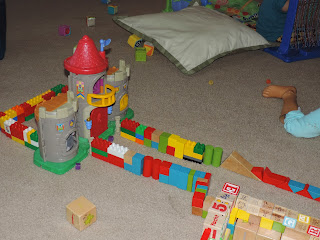 So there you go.  A simple suggestion, using things you probably already have around the house, that could potentially keep your kids entertained quite a while.  What's nice, is that with a group of kids, you can set the game in motion and then wander off to do other things, and they continue to play.  Maybe this directed play thing is not so bad after all.