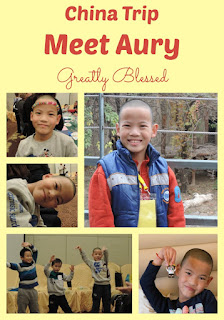 I had an amazing time in China.  I went not knowing quite what to expect, just knowing that I'd be spending time with a specific child for a few days. 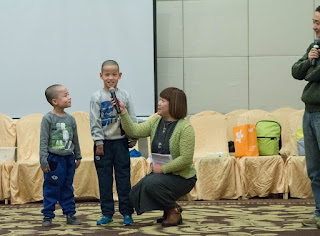 We left the US on Saturday, arrived in China Sunday, and visited the Wall on Monday.  (I think it was a really good thing that we had a day to acclimate before meeting the kids.)  Tuesday, we met the children. 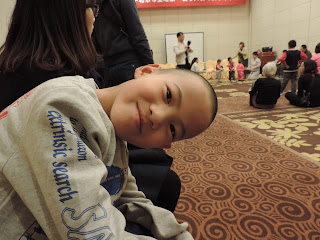 I watched for a bit and realized "that's my little guy!"  So I snuck over to take a couple pictures of him.  And this is the face he gave me when he noticed me.  This is typical Aury.  He's funny, and lively, and spunky. 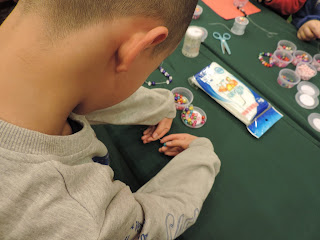 At one point, the SWI staff busted out a massive amount of crafts as an icebreaker.  Aury picked beads. 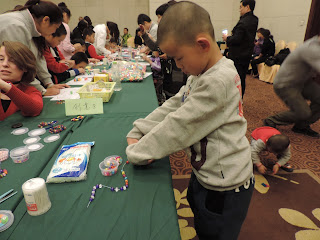 I was thinking, "Er, should I redirect him?  I mean, beads?  With his hands?"  Silly me.  And yes, I really ought to know better, living with Hannah and Katie, both of whom have hand differences. 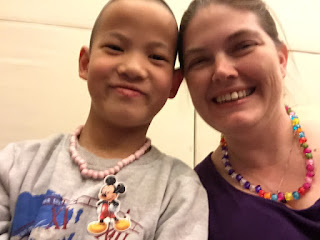 Aury proceeded to make 2 bead necklaces, one for me, and one for himself. 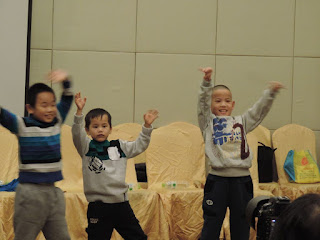 They had the kids sing songs and recite poems and dance.  It was really great to watch. 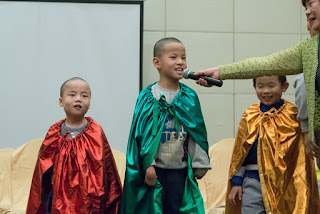 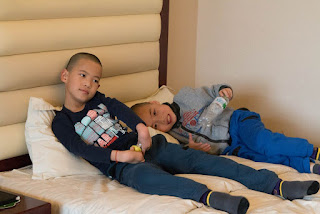 We were instructed to take the kids back to our room for "nap time."  Since our little guys were buddies, Jennifer and I took them up to my room, and they rested for a while.  They were very good natured about it.  You can read about Tristan, too. 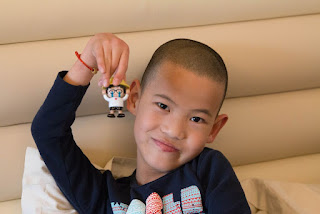 One of the nannies gave him this little toy, and he was showing everybody how the face changed to display different emotions. 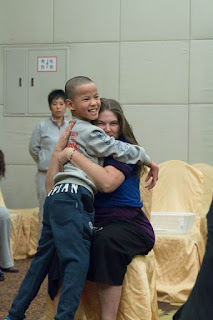 This totally UNflattering shot of me was part of a game.  The kids were told, "Every day, the mamas take care of you, now you take care of mama!"  They had to dress us in a t-shirt, give us a drink of water, and feed us little wafers.  Down came the bun my hair was in before the shirt went on, but it was all good. 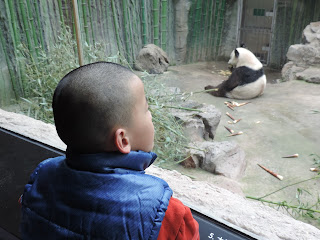 The second day, we loaded all the kids, nannies, and advocates up on 2 buses and went to the Beijing Zoo.  9 year old Aury taught me the Mandarin words for "panda," xiong mao.  And the next day, he taught me the word for "rain" as we got drizzled on at the mall. 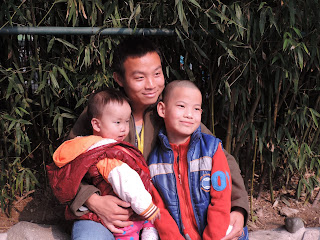 Our translator/guide, Leo, was really awesome with the kids.  Aury adored him.  Funny story:  The kids call everyone Mama or Baba.  Leo corrected Aury, asking him to call him Ge ge (older brother) rather than Baba (father).  I laughed and said, "Hey, at least it wasn't Ye ye," (which means grandfather). 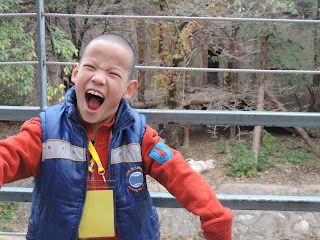 Aury's "rawr!" in front of the tiger.  This picture totally makes me smile.  He is such a character. 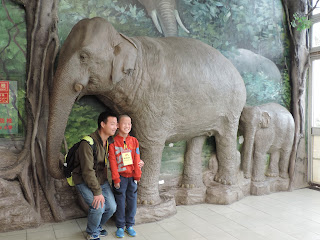 Leo and Aury in front of the elephant statues.  Although the orphanage brought along a wheelchair for Aury on zoo day, he walked about half the day, and most of the time he was walking, he wanted to be holding Leo's hand.  An ideal family for Aury would include a really involved dad, and maybe older brothers. 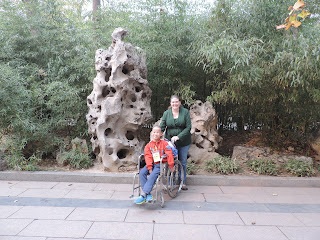 Aury and I at the end of the day, in front of the special Beijing rock that used to only be used for royalty.  (If you've been to the Forbidden City, you may recognize it's the same rock that is in the little rock garden behind the FC.) 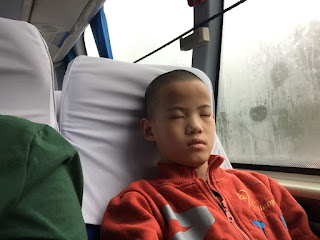 Many of the kids crashed out on the bus. 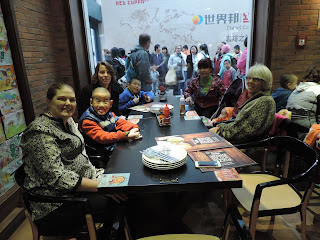 After Zoo Day was Shopping Day.  We loaded up the buses again and took the kids to a mall.  We had a western style lunch, pizza!  The pizzas were huge, the size of cafe tables.

We did not bring the wheelchair along on Shopping Day, and Aury did just fine.  He had surgery on his feet at one point, and now walks well, although his gait is a bit awkward.  Families interested in Aury should be willing to get him into physical therapy to help improve his mobility.  Aury's special need is arthrogryposis, which means he was born with some joint contractures, which is why his hands curve inwards.  It's not contagious.  It's not progressive; he won't get worse.  Serial casting (similar to what Katie went through for her club foot) or surgery and physical therapy may help Aury achieve a more typical look, and better function with his hands and arms. 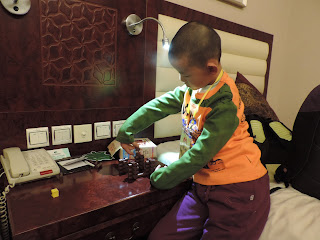 We did developmental assessments on all the kids.  While waiting for his turn, Aury built a house out of Lincoln Logs.  He's very capable, and his different hands don't slow him down. 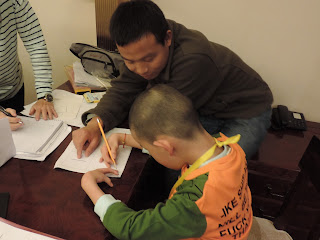 Although not in school right now, he writes his name beautifully in Chinese.  He also counts to 200, and I have an earlier picture of him writing numbers 1-10.  This boy is bright, and needs a family and an education. 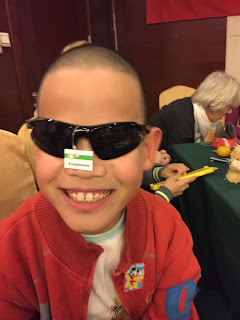 Our last day together was the farewell ceremony.  We presented our kids with bags of gifts to share with their friends back at the orphanage.  (Of the 500 kids at the facility, only about 30 participated in the Journey of Hope program.)  Aury had a great time going through the bag and checking out all the cool loot, including these stylin' shades. 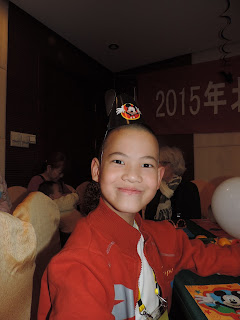 Party hat.  There was an amazing cake for each of the tables. 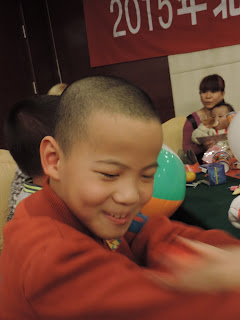 There was a set of funny lips with a whistle attached.  I was trying to get a picture of him with them, but every time he saw the camera, he whooshed them out of his mouth.  Look at that smile!  He's a fun, happy guy. 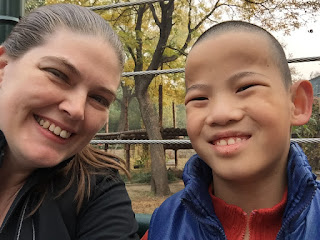 Aury would make a great son for some lucky family.  Could it be yours?  Please share this post so more families can see and consider this precious child.