The Perfect Bible For Tween Boys 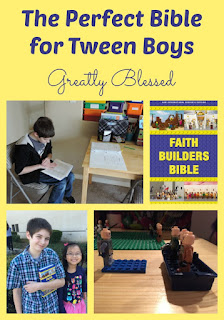 Jack loves Legos.  In fact, looking through these pictures, I realized he's even wearing a Lego shirt in some of them.  So I knew that getting to review the Faith Builders Bible from Zonderkidz would be a big hit with him. 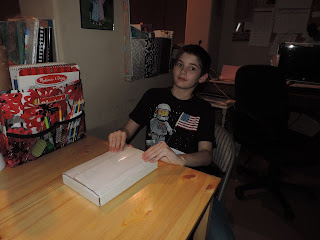 I didn't tell him what was coming, but I let him open the package. 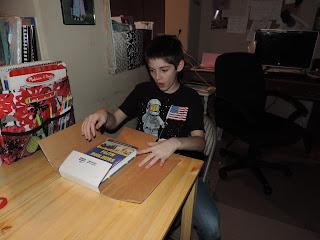 His face says it all, doesn't it? 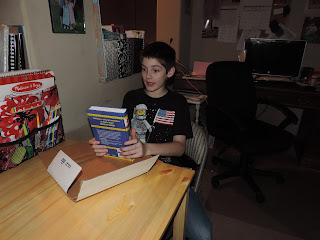 The Lego Bible, as he calls it, is a big hit with Jack, who is 11.  He read the first few pages of Genesis all on his own the night he got it. 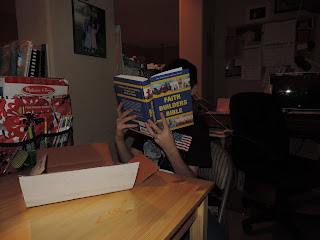 While we have several Bibles floating around the house, as many American households do, most of my children have not received their very own Bible, for their personal use only, until starting high school.  There's a certain version on the school supply list, and within that version, I've bought several copies with different covers to suit the personalities of the users (or to fit our budget at the time, as the case may be).

Having his very own Bible was a bigger deal to Jack than I thought it would be.  One day, he asked me, "Can I get extra credit for copying the same verse from my handwriting out of my new Bible?"  I said, "Sure!" and then I laughed a bit, thinking, "Dude, you're homeschooled.  What does extra credit even mean to you??"  But anything that gets him looking up verses and practicing handwriting is an A+ in my book! 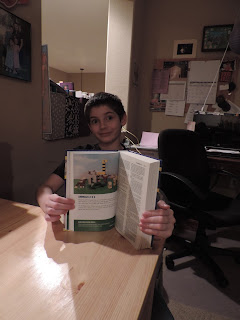 One of the fun components of this Bible is that it contains full color pictures of Lego builds depicting Biblical scenes and challenges kids to read more about the story shown.  It also includes "building block verses."  A feature I particularly like is the books of the Bible grouped by type, shown in different colors.  It helps kids to visually see the which books are minor prophets, which books are law, which are the gospels, etc. 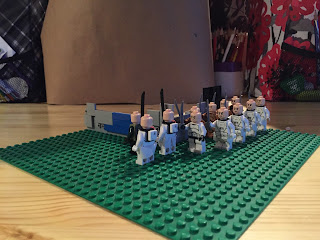 Which, of course, inspired my boy to create some Bible scenes out of his own Legos.  This was the Israelites walking around Jericho. 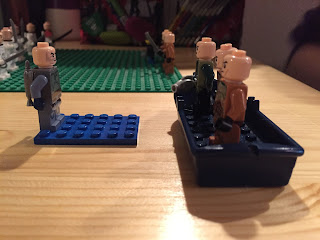 And Jesus, walking on water. 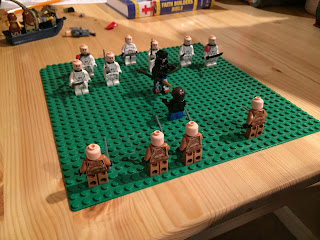 And a depiction of the fight between David and Goliath, with the army of Israel in the foreground and the Philistine army behind the giant. 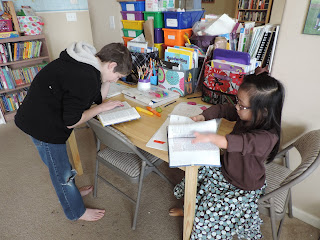 Jack has been using his Faith Builders Bible to look up verses for our current Bible study.  Hannah's borrowing one of my Bibles, but having seen how much use Jack's Bible is getting, I think I might get her her very own Bible for her upcoming birthday in April.  This VeggieTales Bible might be just the thing for her. 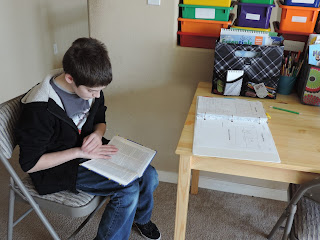 Interestingly, despite the fact that we learned to recite the books of the Bible last year and the year before, actually looking things up is not something my kids have had to practice very much, and I had to teach them how to do it.  We're working on a new Bible study, and it's been nice having Jack and Hannah learn to look up verses so that they can do some of the reading aloud instead of me doing it all. 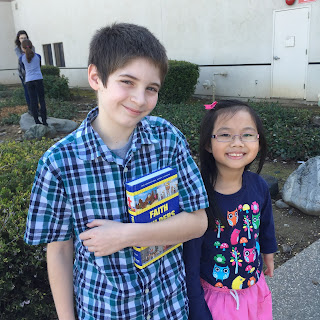 Jack was very excited about his new Bible, and the day after it arrived he came running to me with an urgent question:  "Mom!  Mom!  Can I take my new Bible with me to church on Sunday?"  Yes, of course you may.  Then I discovered a bit of an ulterior motive.  "We get candy for bringing our Bibles to church!"  I see.

The Faith Builders Bible is the NIrV, or New International Reader's Version.  It sells for $24.99.

You can connect with Zonderkidz on Facebook and Twitter.  To read what other Crew Families have to say about the Faith Builders Bible, please click the box below.