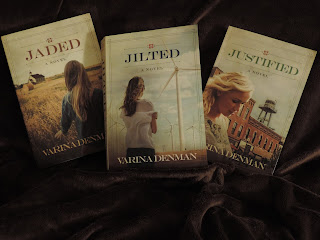 When I agreed to review Jilted, book 3 of the Mended Hearts series by Varina Denman, the publisher generously sent me books 1 and 2, as well.

I picked up Jaded at bedtime one evening, and finished it at 3:38 a.m.  I couldn't put it down.  Jaded highlights Ruthie's character, but really, all the characters have a surprising depth and complexity to them.  (Grady gets some of the best lines in the book.)  Boiled down to it's simplest, Jaded is a romance between Ruthie and Dodd, but it's so much more than that.  It's about hypocrisy in the church.  It's about lies and secrets.  It's about forgiveness.  To say I enjoyed Jaded would be an understatement.  In fact, it took me a couple days to pick up the next book in the series because I was still reflecting on the story in my head.

Book two, Justified, sees Fawn through the surprise pregnancy she discovers at the end of Jaded.  Tyler gets seriously creepy, and we see a lot more of Ruthie's lovable cousin, JohnScott.  We also find out some very old secrets.  In Justified, you begin to understand more about the older generation of characters in Jaded.

Although each book can be read on it's own, I'm really glad I read from the beginning.  Having the background made Jilted that much more poignant.  Jilted is so much more than the romance between Lynda and Clyde.  It's answers to the questions raised in Jaded.  It's healing for a broken family.  It's a non-critical look at mental illness.  Even though I could predict some of the events that occurred, it was well written enough that I enjoyed watching them unfold.

Can all things really work together for good, and can the joy of living be found once again? Don't miss one woman's story in book three, Jilted, of Varina Denman's Mended Hearts series. Lynda Turner has struggled with depression since her husband abandoned her and their young daughter fifteen years ago. Yet unexpected hope awakens when a local ex-convict shows interest. As long-hidden secrets resurface, Lynda must fight for her emotional stability and for a life where the shadow of shame is replaced by the light of love.

Celebrate the release of Varina's Jilted by entering to win a $50 gift card.

One grand prize winner will receive:
The giveaway ends on July 1st. The winner will be announced July 5th on Varina's website.