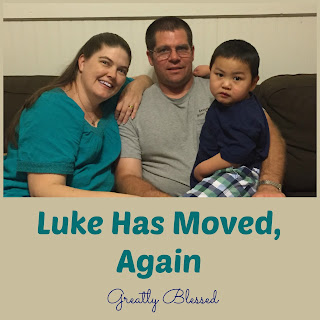 Longtime readers know our story, but for those who may be new to the blog, I'll recap.

In 2013, we adopted Luke from China.  He was not quite 2 years old at the time.  He was very delayed, but we assumed with love, good nutrition, and early intervention, he would catch up.  "Worst case scenario" in my (rather clueless) mind was that he'd still need an IEP when he was school aged to help him get through school.  I felt we could handle that.

His first year home was a whirlwind of doctors appointments and therapy.  We took him everywhere we could think of to work toward getting a diagnosis so we'd know how best to help him get on track.  He had a multitude of tests run.

In early 2015, we finally got a firm diagnosis.  The genetic counselor sat there and told us he was not going to get better.  That in several years, he will begin to decline.  That he would eventually lose the ability to swallow, but would linger on, probably to middle age, and likely die of pneumonia.

It was very overwhelming.  In one sense, it was a relief to know that nothing we could do would help him.  It wasn't that we hadn't found the magic panacea.  There wasn't one.

Ultimately, we decided to place Luke with a family who was better equiped to handle his total lifetime care needs.  We said goodbye to him in April 2015 and started to find our "new normal" as a family.  After a couple of months, things were stable enough that we agreed to host 2 toddlers for a family in crisis.  Then in August 2015, I got an email from the attorney handling the adoption.  4 months into a 6 month finalization period, the other family wanted out.

Paul hopped on a plane the following week and went to pick him up.  It was good to see Lukey again.  He'd grown, noticably, and he had started scooting himself around in a seated position, instead of only on his back, like before.  We were encouraged to see this new skill.

We decided not to make any decisions about Luke until after the toddlers went home.  The toddlers left in October, and then I left for China on an advocacy trip (and the jet lag that followed).  Finally, between Thanksgiving and Christmas, we realized that all the reasons we had chosen to place Luke with another family were still valid, and having him here was not a feasable long term solution.

We considered a group home.  But aside from the cost factor, it's not a family.  We felt he would do better in a family, if one could be found for him.  So we started the search again.

It's not easy to find a family willing to take on a child with diagnoses like Luke's.  At times, it was a very discouraging search.  But eventually, through dozens of emails, we connected with the right family.  We started talking in March, and in May, we met with a social worker to go over placement paperwork.

Luke has now moved to their house.  It will be 6 months before the adoption is finalized, if all goes well.  Luke's new family has extensive experience with special needs, both personally and professionally.  Please pray that he continues to transition well with them, and that this will be the last stop for him.  Although he's not cognitively capable of RAD, or physically capable of RAD behaviors, I know consistency is good for him.