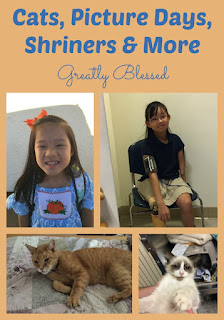 After 4 weeks of all the kids being in school, I can happily report that we're falling into our new routine nicely.  Mornings run smoothly, after school snacks and homework are happening, and so far, we haven't had a forgotten lunch box or an epic melt down (me or the kids). 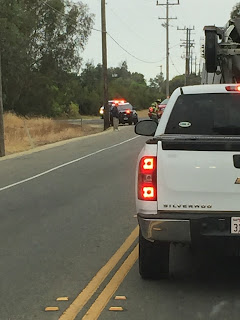 The drive out to the younger kids' school is nice, but I did have to sit in traffic one morning after dropping them off because a crash closed the road. 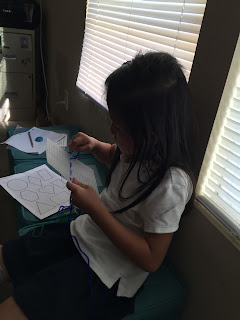 I like to pull an activity out to have ready for Katie to play with when she starts wandering around looking lost while Hannah is doing her homework.  This was lacing cards. 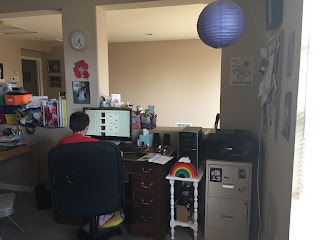 I did some work on the school room and changed the direction of my desk, moved some stuff around, threw out a lot of paper trash that we didn't need any more.  I'm slowly getting rid of homeschool stuff we no longer need, and am thinning down some of our other books, as well.  It's progress, but I still have a long way to go. 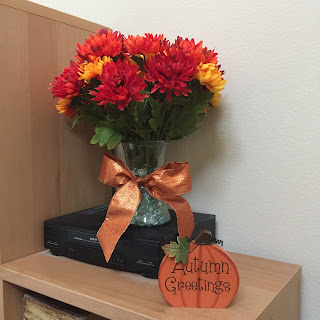 I got the wild urge to decorate over a week ago, and now the house is looking a bit more autumn-y.  There's a leaf garland on the piano, and a scarecrow family on the mantle, and some other little touches, too. 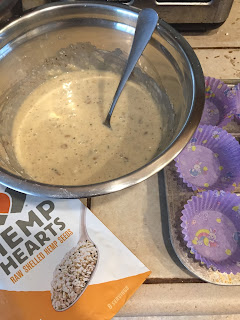 Still using up the cupcake papers.  I've been throwing all sorts of random things in the muffins I've been making.  Hemp hearts are an easy addition that adds great nutrition without significantly altering the flavor. 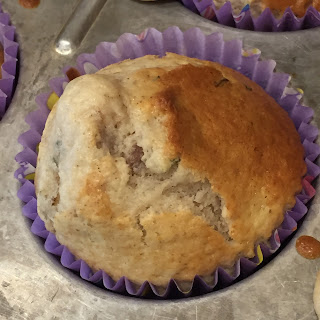 I think my favorite are the apricot muffins, but the banana nut ones were pretty good, too.  I've also used blueberries or craisins. 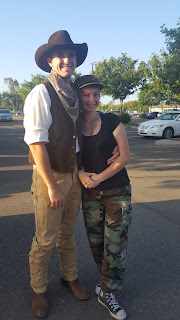 It looks like Halloween, but it's actually picture day.  Since the seniors have Senior Pictures in the yearbook, they've taken to dressing weird for regular picture day. 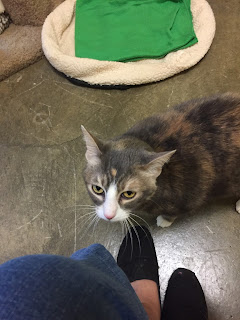 Jezabel, one of my current favorite kitties at SPCA.  She was unhappy in a small habitat, but since moving to a larger room, she's become quite the love bug! 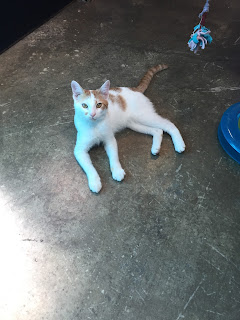 And Leo, another favorite.  He plays with enthusiasm, and had to take a little rest during our session, lol. 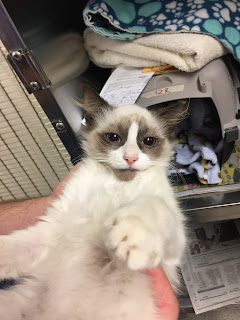 Can you believe this Grumpy Cat lookalike is a feral?  It came into the feral spay and neuter clinic last weekend.  Some of the cats are pretty rough looking--you can tell they've had a hard life.  But some of them are soft and pretty. 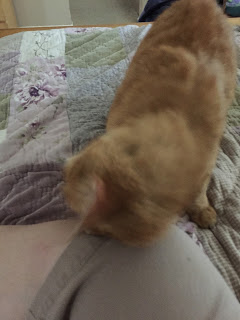 Speaking of cats...  There's my sweet Wheelie.  For those who don't know, he adopted us, many years ago.  He just kept showing up in our yard until we accepted that he was our cat.  Well, lately, it seems that he's been spending a good deal of time at one of the neighbors down the street. 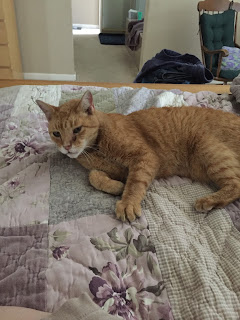 So it was very nice to have him come home and grace us with his presence for a few hours. 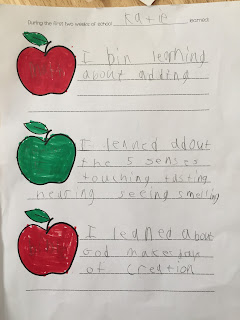 This paper I found in Katie's backpack cracked me up.  She's "bin learning" quite a bit in school. 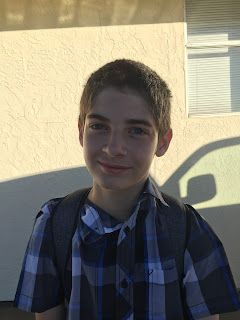 Speaking of school, the younger kids had picture day, too.  Which I forgot about until the night before.  Jack's not big on button shirts, and frankly, it never seemed like an important issue, since he has a largely casual life.  Some frantic digging produced this shirt that used to be Eli's, and it was perfect.  Except the school insisted that he put a tie on for the picture.  And the tie in his backpack had stripes.  I'm expecting the pictures to be cringey.  I may just have him wear the shirt again and take my own. 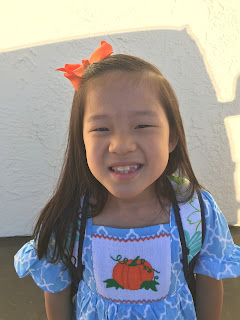 Pretty sure she would look cute in a burlap bag. 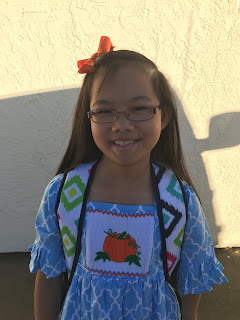 As would Miss Hannah. 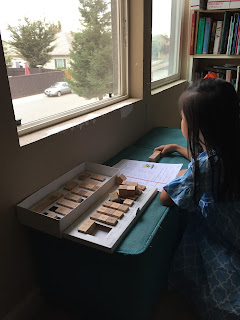 Katie, making her spelling words with our phonics blocks.

Katie had been telling me every day, "I don't have any homework," and since she's my 9th kid, I had not actually bothered to open her backpack up to this point.  However, the teacher mentioned "in their homework packet" on the class app, so I thought I'd better investigate.  Turns out, she has had homework, the whole time.  And she's been telling her teacher every day, "Oh, I didn't do that last night."  Sigh.  Not sure where the disconnect is in her little mind.  I don't think it was malicious avoidance of school work, but I'm not coming up with a better explanation, either.  So, no Mother of the Year award for me this year. 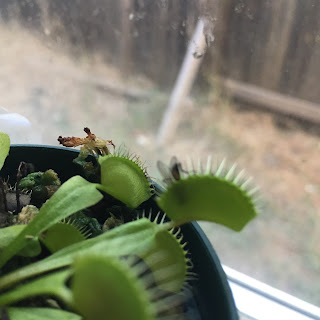 Paul and I spent a morning at Green Acres and Lowe's, oogling plants and having ideas.  We came home with a few things, including this Venus Fly Trap, which is already doing it's job. 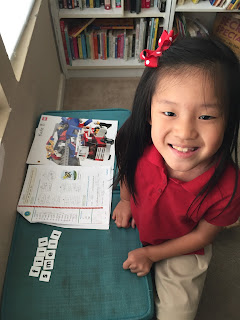 Spelling her spelling words with word tiles.  No words next week because of the big field trip (more about that later) but I'll be pulling out the sidewalk chalk for her words next month. 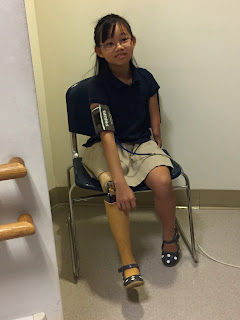 The girls will be getting new legs.  The first step in that parade is to have the girls see the doctor so he can order new legs.  This was that appointment. 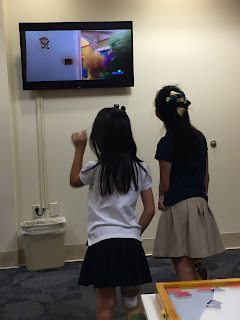 Miss Katie even got an x-ray.  My poor television-deprived children found the Sesame Street playing in the imaging waiting area fascinating. 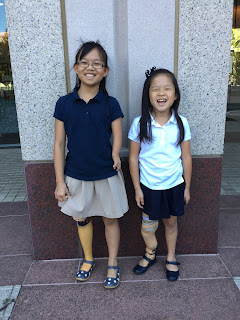 Done at Shriners and headed off to school! 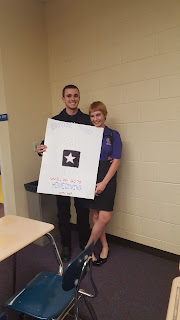 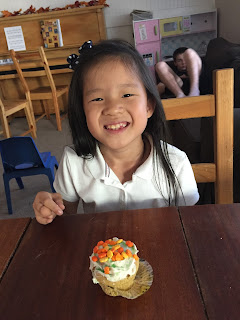 The kids are loving the whole After School Snack idea.  I should have started this years ago. 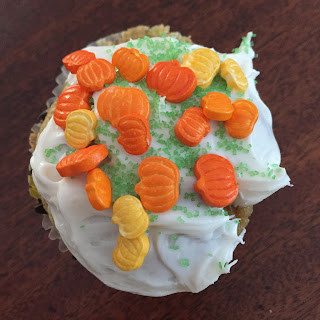 In fact, the one day that I wasn't able to make anything, Josiah stepped up and made these pumpkin spice cupcakes with pumpkin patch sprinkles. 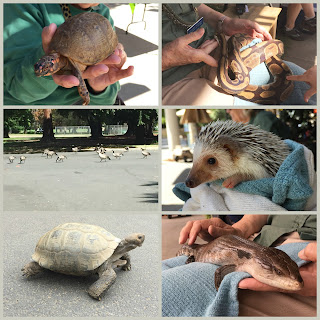 On the volunteering front, I've now hit over 75 hours, with more than 35 of those hours in September.  I don't think I'll have any problem hitting my goal of 100 hours in 2017.  I'm moving past the "everything is new and interesting" stage and starting to discover which opportunities I enjoy the most.