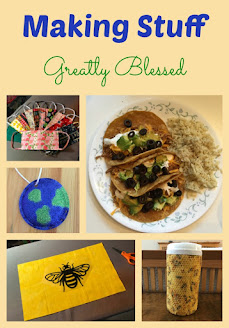 Summer has been less out & about than usual for us, but we are doing more than just staring at screens.  I have to remind myself of this when I can hear video games from 2 different rooms of the house.

Still struck by what a weird time we're living through.  I think creating things is a good coping skill for me. 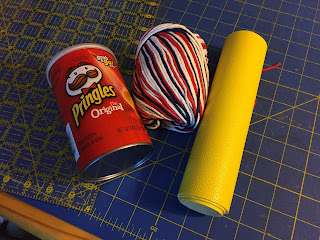 A chip can, some yarn, and a roll of faux leather.  Add a little laundry starch and some glue, and it became another decoration for our little patriotic corner. 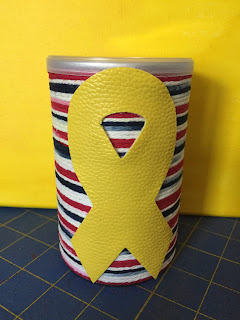 My intention is to put some small rocks in the bottom, poke a couple holes in the lid, and use it for a flag holder.  I liked this craft because it would be really easy to do in so many different ways.  Change the color of yarn, change the ribbon to something else, and it's a different project.  Imagine using jute instead of yarn, and putting a flower on it.  Suddenly, it's a vase.  Or using golden yellow yarn, putting an apple on the front, and it's a pencil cup.  You could use variegated pink yarn, a pink ribbon on the front, and fill it with treats for a friend fighting breast cancer.  I used my Cricut to cut the ribbon, but you could easily freehand it or print something to use as a template. 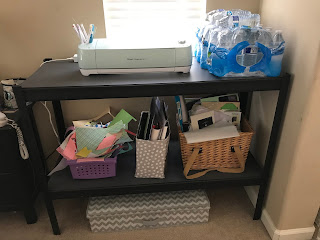 Speaking of Crikey (my nickname for my Cricut machine), it's got a new area.  Since the sewing room has been in mask production mode, it's been hard to drag it out and set it up and then put it away again each time I want to use it.  I'm hoping that with it's own, permanently set up space, I'll use it more.  The overflowing basket is paper scraps, mostly 12x12" ones that don't fit in the smaller sized basket.  I haven't figured out a good way of storing these yet.  The file bin is mats, sheet vinyl, and other miscellaneous supplies.  The basket on the right is mostly paper, cardstock, blank cards/envelopes, and faux leather.  The "under bed" bin is rolls of permanent, removable, and iron on vinyls.  And that little space to the right of the under bed bin is where Grumman hides when he realizes I'm getting ready for bed and he doesn't want to be tossed out of my room for the night. 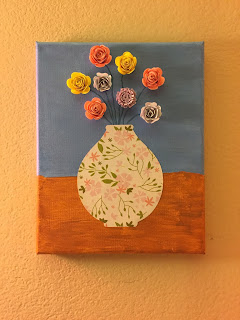 Lousy lighting, but a little piece of "mixed media art" I made.  The background is paint, the vase is vinyl, the stems are pen, and the 3-dimensional flowers are cardstock.  This is one of those it-was-cuter-in-my-head ideas. 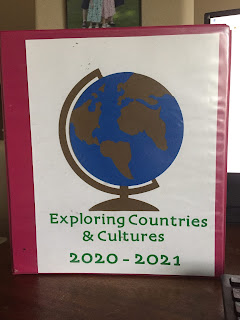 I think I shared the "in progress" binder cover, but here's the finished version.  The binder holds my homeschool planning and record keeping stuff. 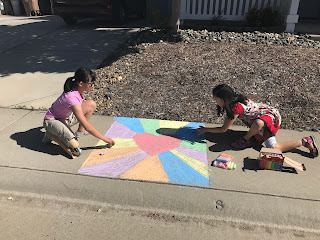 Our city had a sidewalk art contest a while back.  Trying to make people feel connected to each other, even though everybody's supposed to be staying home. 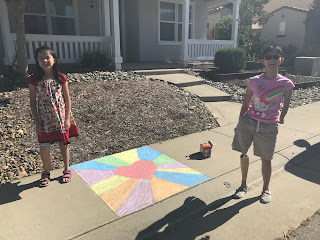 There were some incredible entries. 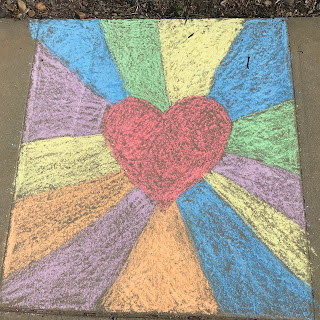 This one was ours. 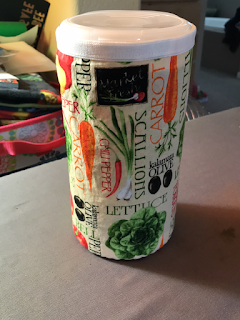 Someone saw my mask posts and asked if I could sew a cover for their Clorox wipe container that they keep on the kitchen counter. 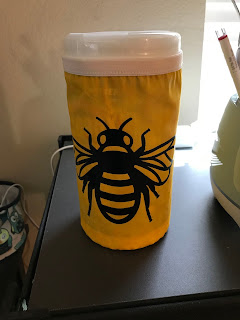 Turns out, I can.  They asked for bee fabric, but I didn't have any.  So I ordered some, then I used Crikey to make a bee to iron onto yellow fabric. 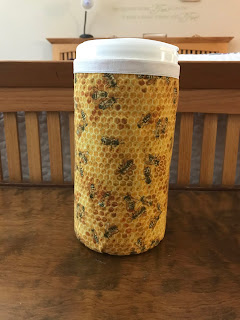 Then the bee fabric arrived, so I made another one.  These fit standard, Costco sized, Clorox or Lysol wipes. 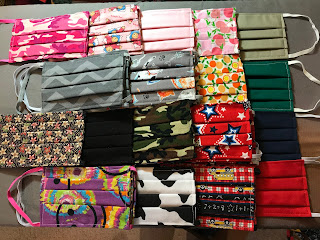 And yeah.  Masks, masks, masks.  These are kid sized. 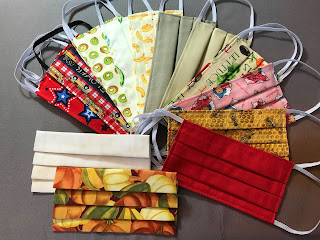 And these are grown up sized.  I hit the dubious milestone of sewing my 600th mask last week.  Who would have known I'd have mad pandemic skillz?  I sent 25 masks in to the Tieks mask drive for a discount code.  I've seen their shoes on Pinterest, and wanted to try them, but they're pretty pricey, so this seemed like a win win for me.  (Of course, I'm not sure when I'll ever go anywhere that I need to wear cute shoes to ever again, sigh.) 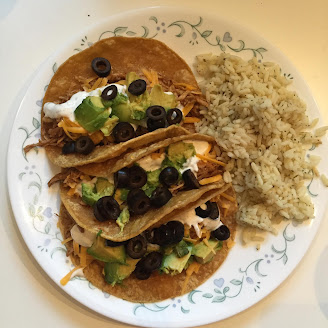 These were amazing roast pork tacos that I made recently.  I make a lot of "taco-ish" dishes.  Brianna is kind of over it.  After only 2 months back. 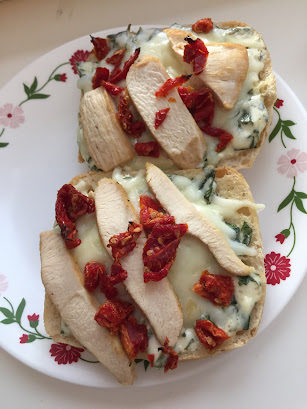 So I decided to try Hello Fresh meal boxes.  This is the panini, but I added chicken to it, because we're carnivores.  We've been bored with eating the same dinners every week, and Hello Fresh seemed like a good way to get some variety without a whole lot of effort on my part.  They don't have quite the right size box for our family, so I always add a little something on the side to stretch it out a bit.  There was zucchini that went with this dinner, but I don't eat zuc, so I skipped that part.  These were pretty popular, so I'll be making them again, outside the boxes. 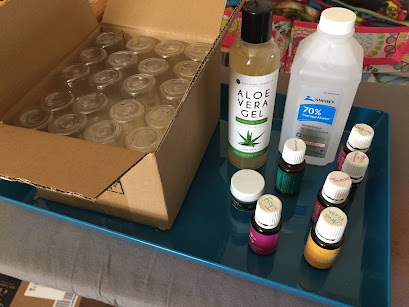 I used to post about "tot trays" when Katie was small.  They were a single activity or directed play setup that she could do while I was homeschooling the other children.  Well, I recently decided we needed a serving tray to get things in and out of the back yard for dining al fresco.  And I was going to Crikey a floral design on it, but that hasn't happened yet.  So it was in my sewing/craft room.  Seemed like the perfect thing for bringing down all the supplies for an outdoor project. 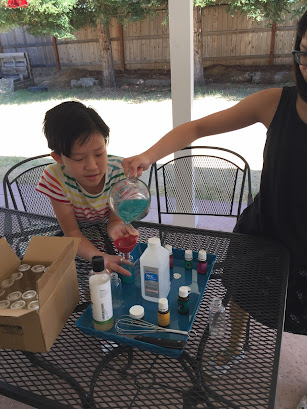 We made hand sanitizer!  Or, as Katie says, "hanitizer."  We used:  rubbing alcohol, which can be hard to find these days, we got lucky; along with aloe vera, brew glitter, little bottles, and essential oils! 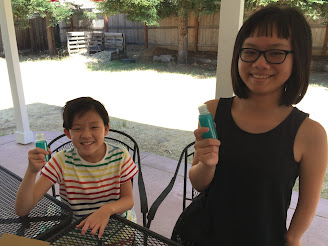 They sparkle, which I thought was fun.  We may pass these out to friends when we start doing group activities again. 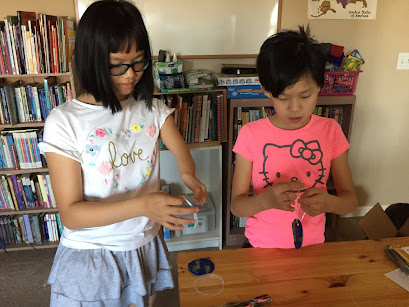 I totally missed out on taking pictures of the beginning stages of this Pinned It and DID It project.  You take can lids (we used Pringles, because Josiah likes them, so that's what we had), squirt a layer of glue into them, then add glitter to make continents and oceans.  Let the glue dry.  Ours took about 3 days. 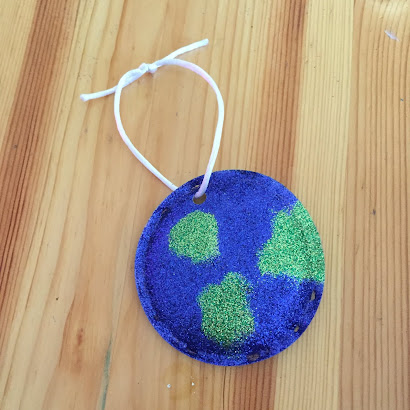 Then they pop right out of the lid.  Use a hole punch to, well, punch a hole.  The hardest part of this project for the girls was tying a square knot. 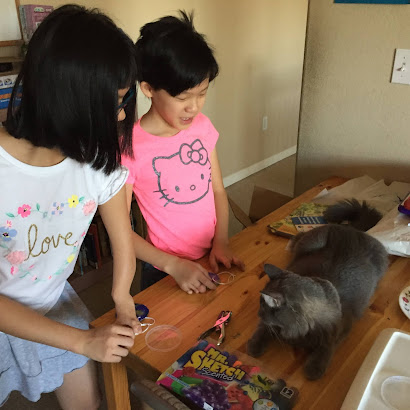 And, of course, it doesn't help that Grumman has been batting these globes around, and wants to know what we're doing with them. 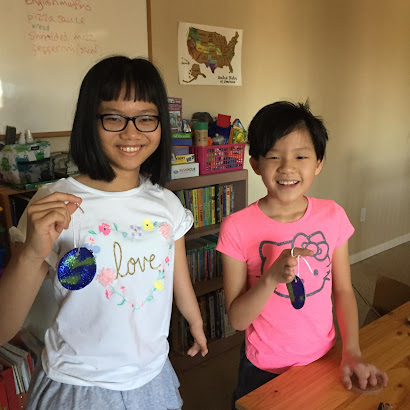 But eventually, we got them finished. 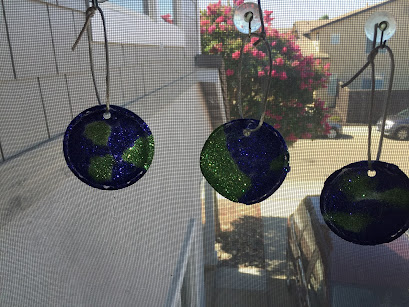 They're currently hanging in the school room window. 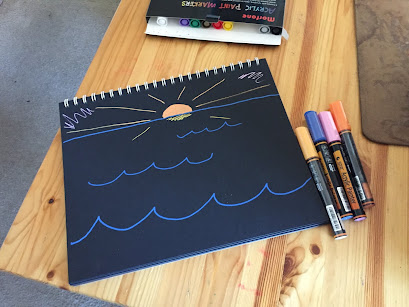 I think I mentioned these paint markers in a prior post.  The black paper I ordered has arrived, and I'm pretty happy about how the paint stands out on it.  We'll probably use this combo to draw birds at some point, since we'll be learning about them this year.
Getting very excited about the start of school soon.  Hoping we can find a nice balance between work and fun, and still have lots of stuff we've made to show here.
at August 07, 2020