Our (Home) School Has Started 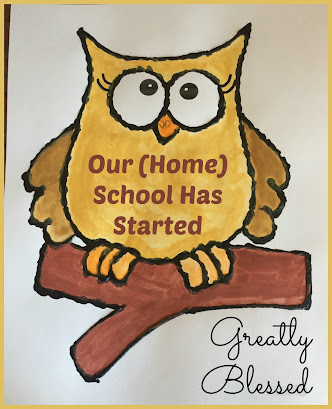 Remember how we got a new minivan back in February, before the world fell apart?  We might not have made the same choice, if we had seen what was coming, but what's done is done, and I am pretty happy with it. 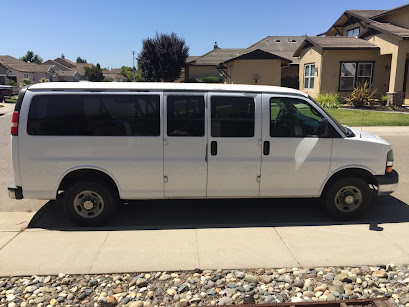 In July, we said goodbye to our big van.  The last of the big vans for our family.  (We've had 3.)  The end of an era.  I have to admit, I had some feelings.  It was a good workhorse for us.  It never stranded me.  We were able to sell it to another large family with more kids still living at home than us.  I hope it will serve them well, too. 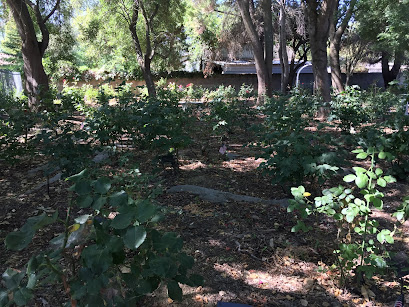 After being cooped up in the house so very much lately, I took a minute to enjoy the memorial rose garden next to the post office, when I was mailing some masks. 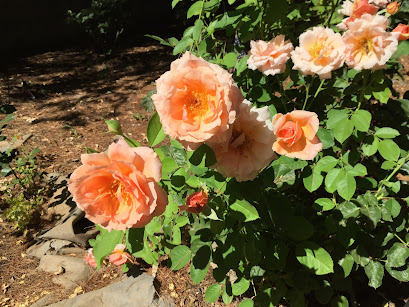 It felt good to take a moment by myself to just enjoy nature. 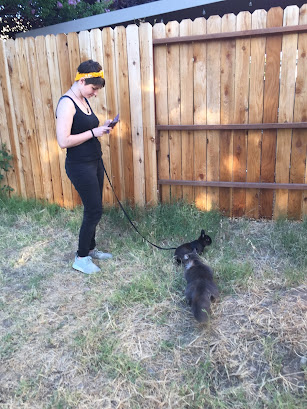 Speaking of nature, Tuzi the bunny and Grumman enjoy getting out in nature a bit, too.  Grumman is curious about Tuzi, but hasn't been aggressive toward him. 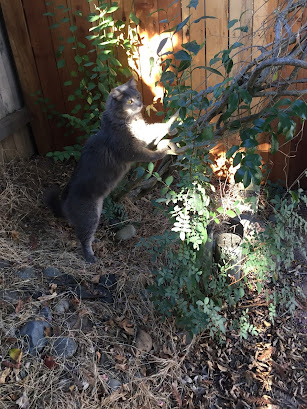 Grumman is an indoor cat that really wants to be an outdoor cat.  Every evening at dinner, he begs and whines for us to take him out in the yard for a little while. 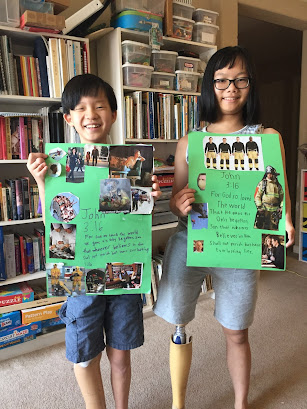 One of our first school projects were these "whosoever" posters.  The girls were supposed to cut magazine pictures of people around the world to illustrate the international love of God.  When the only magazine subscription that comes to your address is Firehouse, the pictures have a decidedly Western flair. 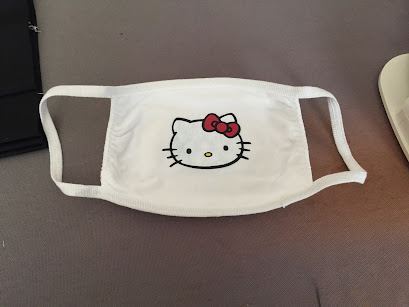 We received some blank white masks, and I used my Cricut (affiliate link) to personalize this one.  I like this image file, and could see myself making t-shirts for the girls with Hello Kitty on them, too.  Maybe even decorating some cheap canvas shoes with it. 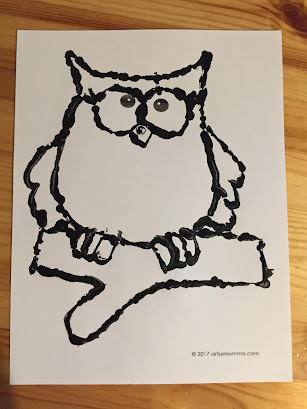 I really wanted this Pinterest project to work.  :sigh:  I bought black glue after seeing a cute Pin, specifically to do these owls.  Since we're doing "flying creatures" for science, I thought it would be perfect.  Unfortunately, the glue is thick and the tip is thick, and we didn't have the control I was hoping for.  It came out kind of gloppy. 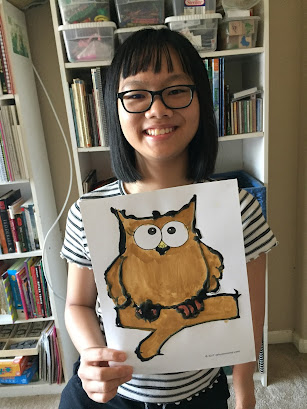 I forgot to have the girls go over the eyelashes with black sharpie after the watercolor paint dried. 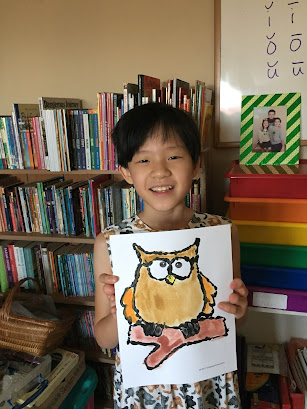 If I were going to use this glue again, I would stick to super simple shapes, like a heart, or a very simplistic 6-petal flower.  It might work for window clings.  Maybe we'll try doing bat clings in October, since those are flying creatures, too. 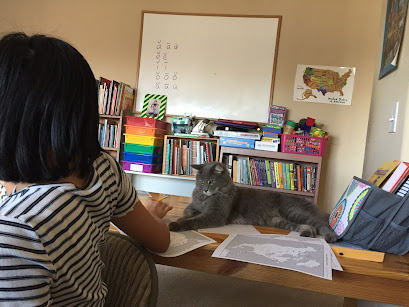 We've had a school mascot before.  Wheelie (the orange cat) used to love to lay in the school room sunbeam (on the floor!) while we worked. 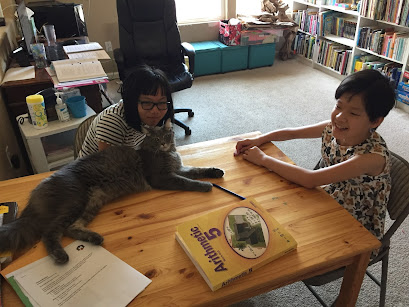 But Wheelie was a mature, mellow, polite gentleman of a cat (who crossed the rainbow bridge a year ago).  And Grumman is a teenager psycho kitty.  When he's not chewing on a spiral bound book, he's swatting at a moving colored pencil, or sprawling across what we're working on. 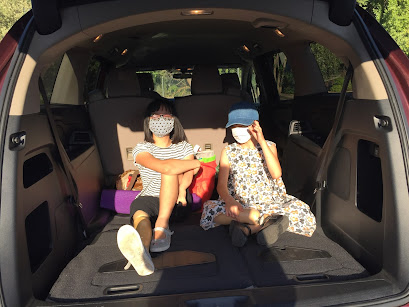 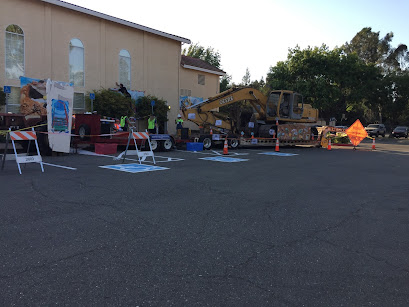 The theme was Concrete & Cranes, and the music was catchy.  Each family got a 5 gallon bucket.  Helpers put the kids' snack, papers, and craft supplies in the bucket, which I thought was a nice way of maintaining distance.  The helper moves to the next vehicle's bucket, and you can retrieve what they left for you. 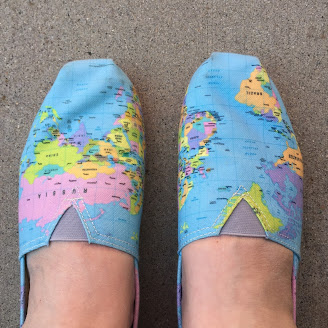 For geography, we've been discussing maps & globes, latitude & longitude, how to read a map, etc.  I let my inner Ms. Frizzle shine through with my footwear choice. 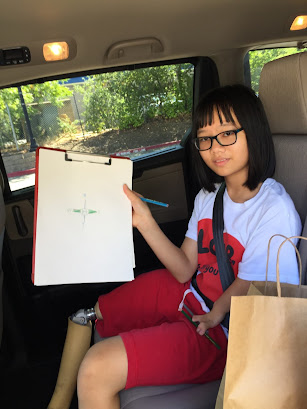 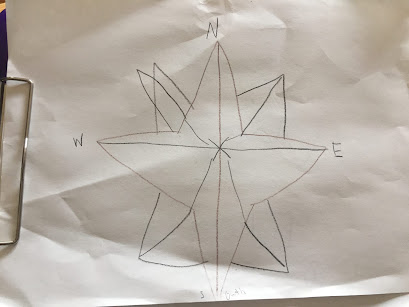 And we talked about NE, SE, NW, SW, as well as the tropics, Equator, Prime Meridian, and International Date Line.  This year lays a really good foundation in geography. 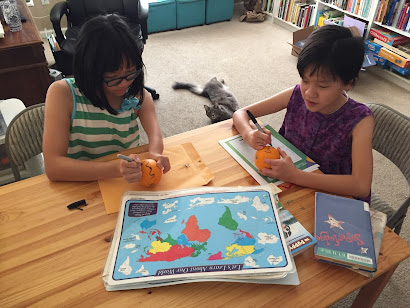 We talked about political maps and topographic maps.  This project illustrated the difficulty in making something round, like the Earth or these oranges, into a flat map. 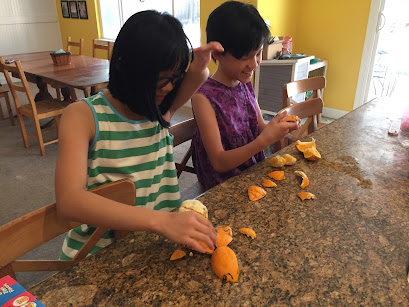 Which helped explain why flat maps are distorted, making Greenland appear huge, when it's really not. 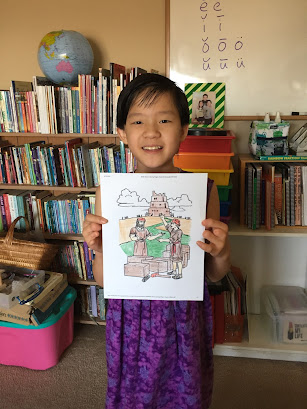 I found the girls a coloring page for the story of the Tower of Babel, and we read about God confusing the languages to cause people to spread out.
So far, so good.  It took us slightly more than a week to complete 1 week's worth of work, minus the material from one book which I thought we had, but cannot find.  I ordered the book, and we'll make the work up when it arrives.  We're finding our groove.  It helps that it's been so hot here that the girls don't mind giving up most of their outside play time.
at August 15, 2020