A huge Thank You to those who've donated to our Reece's Rainbow adoption fund!  We're so very grateful!

And now, onto the picture!

Friday was kind of an up and down day for me, emotionally.  I was thrilled to get everything notarized!  I was nervous about USCIS turning us away from being fingerprinted early.  I was elated that they printed us anyway!  I was touched that Paul was willing to drive back to Sacramento to get everything certified in Friday afternoon traffic.  And then I was crushed when he told me that 9 of our documents were refused.  I was worried about the extra $90 it ended up costing to re-notarize things.  Then I was relieved when he was able to fix the problem and come home with those important shiny sticker pages.

So that's the backdrop of my day Friday.  I opened facebook and found a message from the friend who has volunteered at Katie's orphanage.  She had sent me TWO ADDITIONAL PICTURES of my sweet girl!  For those of you who've adopted, you know how precious even a glimpse of your little one is while you're waiting.  And how those few "before" pictures become very special to both you and your child later, when they're home and processing their story.

The two new pictures were something positive for me to hang on to after a draining day. 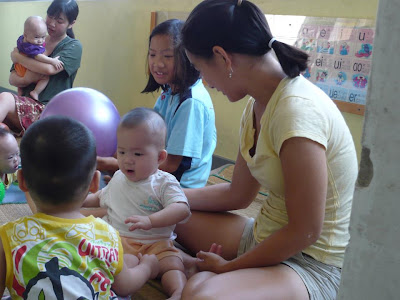 Isn't she darling?
The girl in the yellow shirt was part of the volunteer group that my friend was with.