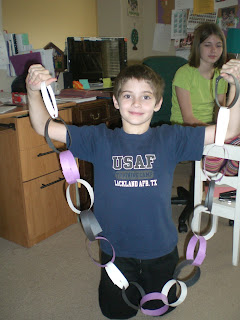 We're getting close enough to Christmas that the kids have started making paper chains to count down. 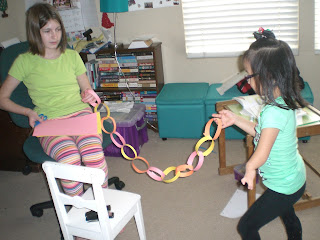 And I finally have an idea for our Kenya ornaments for our Around The World homeschool Christmas tree.  Stay tuned, we'll be making those this week. 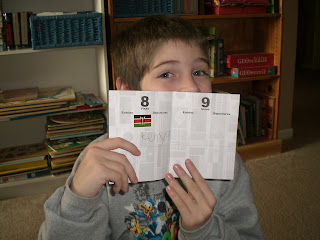 And a new page in our passports... we're on to Kenya! 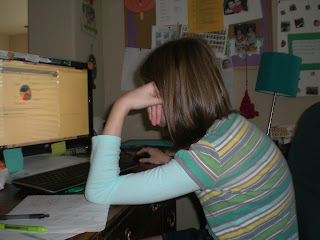 Math.  I love having math on the computer, but I'm still hearing, "I don't get it!" far too often, and frankly, I don't want to help them, because *I* would have to figure it out, and well, I'm no good at math myself.  All that to say, I think we're going to switch to Teaching Textbooks next year.  For as many people who've had good things to say about it, it's worth a shot. 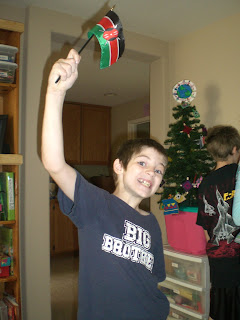 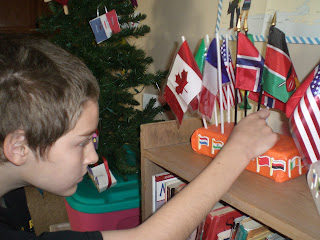 If you notice that some of the sticks are white and some of the sticks are black, it's because originally, I just bought random assorted flags from Oriental Trading Co.  Only the kids came to expect a flag for each county, so I ended up picking up flags for the rest of the countries we're planning to study each year. 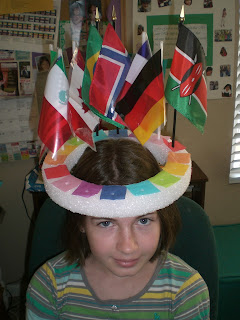 Can you imagine what this will look like at the end of the year?
And, I may be delusional, but I like to think they'll remember better having actual flags around the whole school year than if they just colored a page, stuck it in a binder, and moved on. 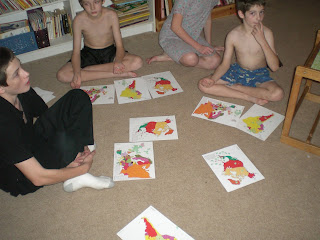 Come to find out, The Big Boys are going to have a big geography final next week.  So I forced them to play the geography game from our curriculum with us.  Brianna still rocks the house when it comes to maps.  I'm impressed with how many countries Jack has added to his repertoire since the beginning of the school year.  I'm so glad we did a pretest so we can really SEE how much they've learned at the end of all this. 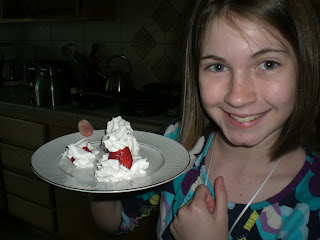 You have to use your imagination a little bit, but these are Santa Hats.  You take a strawberry, cut the top off, turn it upside down, and put a ring of whipped cream around it and a DOT of whipped cream at the top for a pom pom. 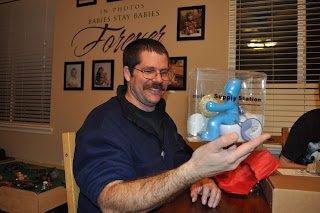 We celebrated Daddy's birthday this week.
The gift?  Don't ask.  His mom gave it to him. 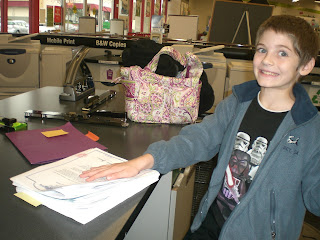 Jack Jack went with me to photocopy the dossier for it's trip to the Chinese consulate in San Francisco this coming week.  $16 in copies take a long time to make.  I ended up handing over my iphone so he could play Swampy (Where's My Water?) while I copied. 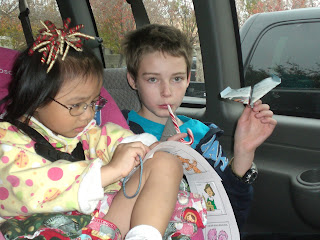 And Eli maintains his interest in all things aviation related.
This was an airplane he made from his Sunday School handout.