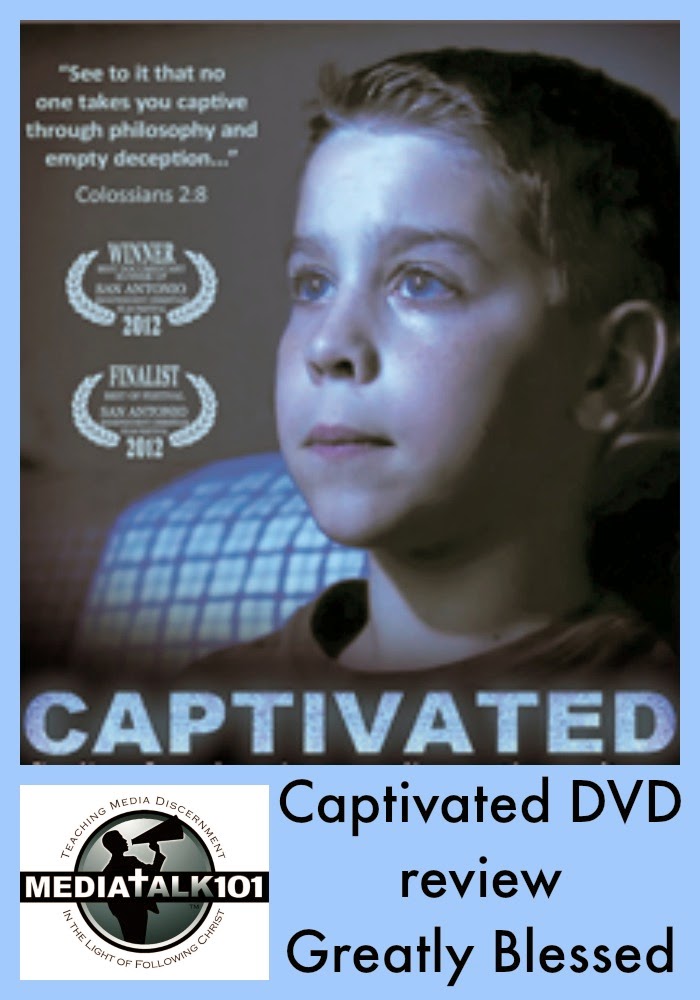 As a member of the Schoolhouse Review Crew, I was asked to watch Captivated, a documentary from Media Talk 101 about media in our lives.  The DVD sells for $16.95, and is intended for adult viewers, but is safe for all audiences.  I have to confess, it was with some trepidation that I finally sat down to view it.  My family already teases me about my iPad usage.

Some of the statistics that surprised me were the fact that there are more TVs than humans in most homes (not ours!), and that kids spend 53 hours a week in front of screens, and that most high school graduates accumulate more television time than SCHOOL time during their academic career.

Almost every parent knows that TV is not good for kids under 2.  This movie goes into why that is, as it talks about how flashy television trains kids to have shorter attention spans.  It's not any better for older kids, whose media addictions cause them to suffer from lower IQ, weight problems, eye strain, hearing loss, carpel tunnel, sleep disturbances, and even car crashes for the texting teen.

An eye opening anecdote was when a handful of parents were able to reverse ADD like behaviors without medication, simply by proper nutrition, adequate sleep, outdoor play, and a strictly limited media diet.

Researchers talked about how media is like smoking crack, in terms of the effect on the brain, making us think we've done something good, when we have not.

Something I am guilty of is "multitasking."  We joke that multitasking means screwing up several things all at the same time, and the movie tells viewers that multitasking hinders learning, and you lose speed, efficiency and accuracy when your focus is divided.

Now, I have to say, that a couple of the featured "experts" are authors of books on this topic, and you can easily tell what their bias is.  But I think this DVD could be a wake up call for families who have not considered the impact of television, computers, internet, video games, and even music on themselves and their children.  The inclusion of music on the firing range surprised me at first, but the more I watched, the more it made sense.  I remember being horrified by the words to a song in a clothing store, when Annaliese was trying on clothes once.

Personally speaking, my parents were divorced, so I grew up with one house that had TV, and one that didn't.  Paul and I have never subscribed to cable.  However, we do have a Netflix membership, which presents it's own challenges.  We have one television, which is used to play DVDs, and no gaming system.  One of my teens remarked that comparatively speaking, we're already pretty "media free" since the kids don't have cable TV and gaming systems in their rooms.

And yet, we're not.  Both the computers in the school room are in use most of the day, by various members of the family.  Some of that usage is schoolwork, or homework related, of course.  Some of that usage is blog-related.  But some of that usage is things like Facebook, which is not only a colossal time suck, but also "amplifies the trivia of youth" according to the film.  Facebook speaks to our need to feel connected, but produces shallow relationships.  You think you know someone, because you see what's going on in their timeline, but it's only what they choose to present.  We are exhorted to enhance, but not replace real relationships.

The time suck factor is important to consider.  God speaks to us in the silence.  If we're constantly plugged in, in some form or another, we cannot hear Him.

Residents at a youth facility talked about how it was hard at first to do away with ALL media for an entire year, but as the cravings go away, they're able to replace media addiction with relationships, experiences, and new skills.  They spoke of being real in a phony world.

No one wants to hear that they're a lazy parent.  But I know I've been guilty of taking the "easy way out" and allowing too much media to creep into my kids' and my own life.  While I think many people don't want to hear what this movie has to say, I think it's a good thing to think about.  All 3 of my teenagers migrated to the front room to watch with me while I was viewing it.  Hopefully, some of the information presented will make an impression on them.

For the families who do consider taking a media fast, it's important to replace media with other things, not just take something away.  Many fasters found they had more time to read the Bible.  Families spend more time playing games together.  Viewers are encouraged to spend time outdoors, read books, learn new things, absorb history.  Make the focus about choosing the good, not about being deprived of the evil.

If you can get past the irony, here is the Facebook fan page and Twitter link for the movie.  All in all, I'd say this documentary was thought provoking, and would be a good discussion starter for couples and families.  Plus, there's a great shot of a llama flaring it's nostrils, which totally made me grin.