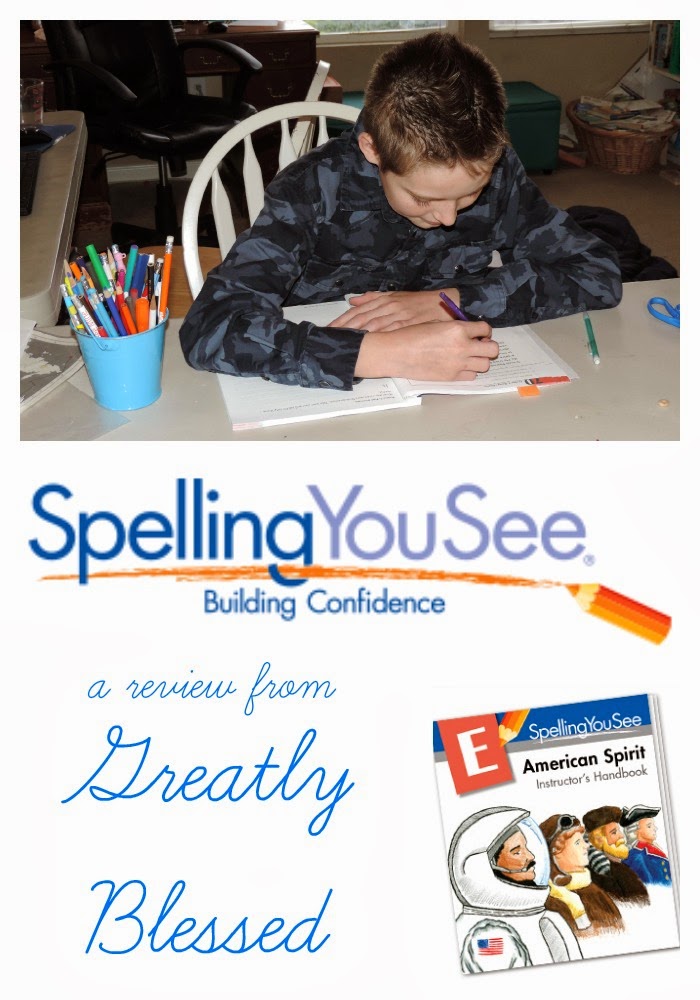 When I heard that the folks at Demme Learning, who brought us Math U See, a favorite of mine and many other homeschoolers, had a new spelling program coming out, I was very interested in being on the review team.  Spelling You See is brand new, debuting March 2014.

I love the way there are no grade levels on these books!  When signing up, I gave both Jack and Eli the placement test.  Jack is 9 and Eli is 12.  The program is intended for elementary students and can be used as remedial work for older students.

Eli tested into Level E, so we were sent Spelling You See: American Spirit (Level E).  The Instructor’s Handbook sells for $14, and the two book Student Pack is $30.  The set also comes with a package of colored pencils.

Spelling You See turned the way I think about spelling on it's ear!  It's totally different from other spelling programs.  There are no word lists.  Let me say that again:  no list of spelling words.

The way it works is, there's a passage each week.  Each day, you and your student read the passage together, then the student is assigned circling certain letter patterns, for example, vowel chunks, blends, etc, with the included colored pencils.  The first 3 days of the week, they copy a portion of the passage you read.  On Thursday and Friday, you dictate the passage to your student while they write it down. 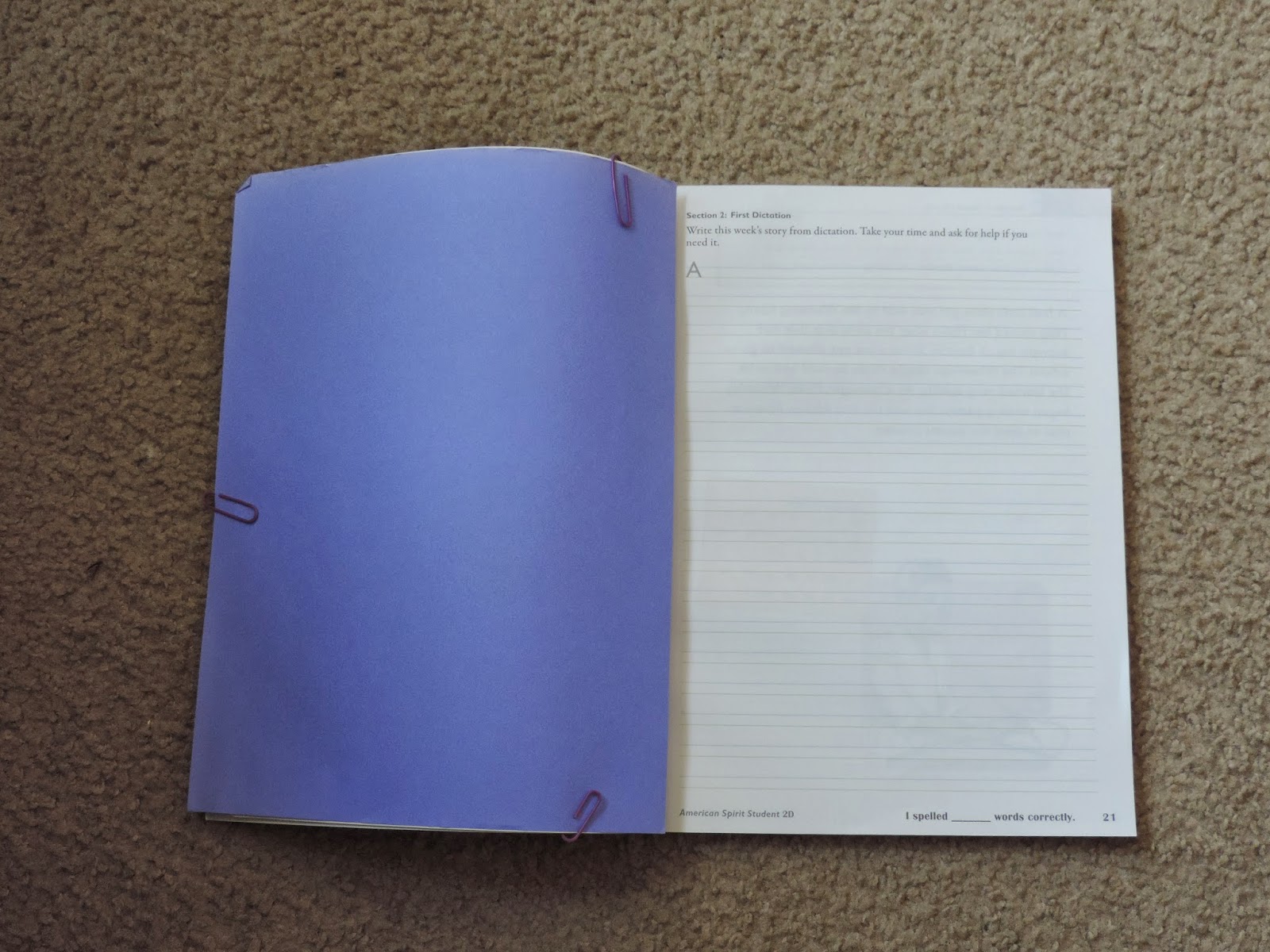 We use a blank sheet of colored paper to block out the passage in the student book during dictation.  Then, I have Eli remove the paper and check his work for errors.  After he's looked it over, I check for spelling, capitalization, and punctuation mistakes, which I have him fix. 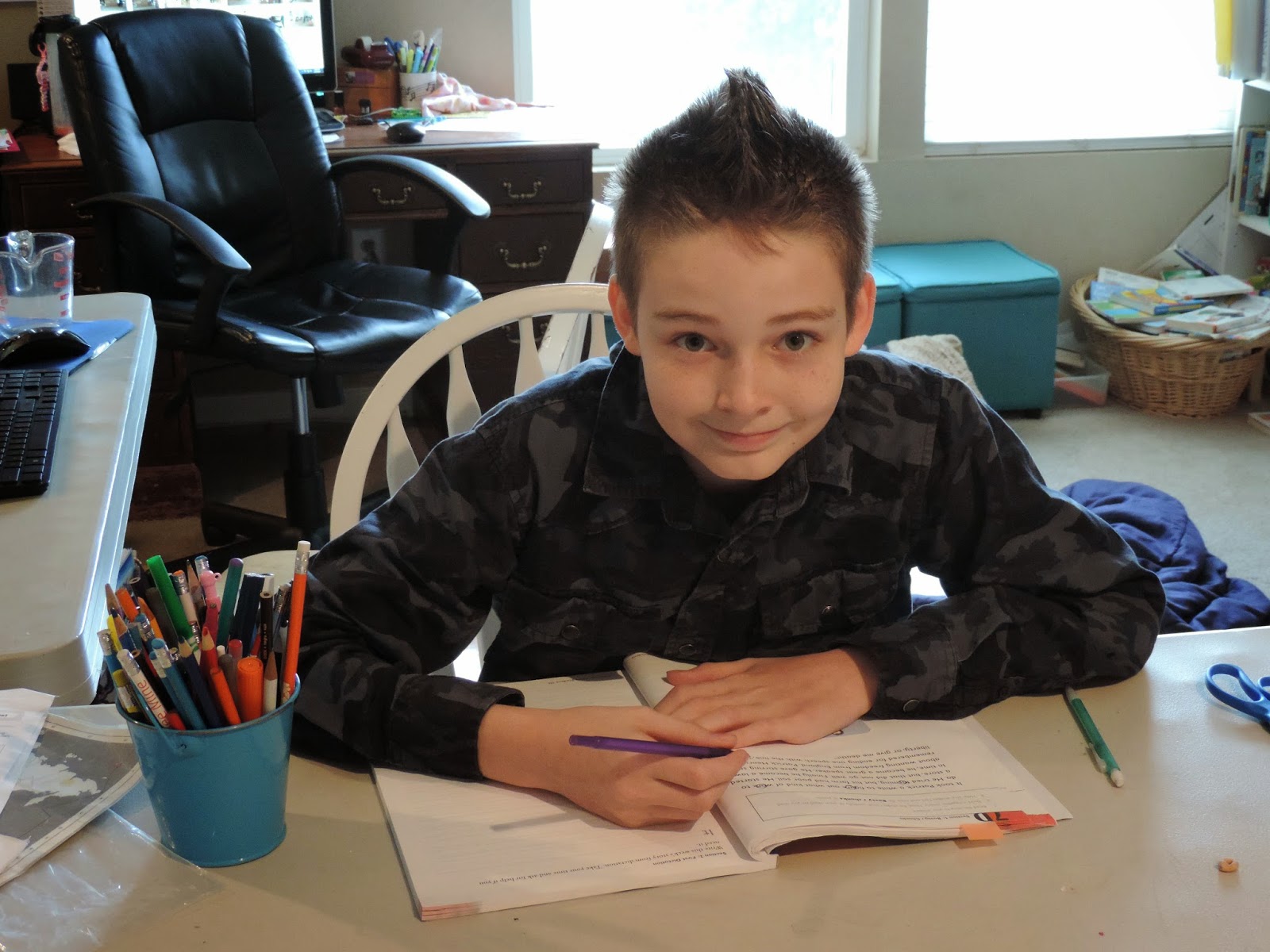 The beauty of this program is that spelling, which can be a real chore sometimes, is over in 10 minutes.  You are instructed in the teacher's book to allow the child to STOP copywork or dictation after 10 minutes.  I laughed a little when I thought to myself, "It's like the FlyLady approach to spelling!  You can do anything for 10 minutes!"  It's easier to get a child to do something for 10 minutes than to tell them they're going to, "Sit! In that chair!  Until it's done! And I don't have any plans until Tuesday, young man, so you take all the time you need!"  Ahem.  Or, you know, however it goes in your house.  10 minutes we can do.

I like that the passages all relate around a central theme for each level.  For example, our level E book, American Spirit, has fascinating tidbits of American History as the copywork.  Eli actually went through BOTH whole workbooks, reading the passages ahead of time, which tells me they're pretty interesting!  Week 5 talks about Eli Whitney, who invented the cotton gin, and when we looked up more information about him online, my Eli discovered that Eli Whitney was also instrumental in standardizing gun parts.  Obviously, he found this more fascinating than the cotton gin, but he wouldn't have learned it at all without Spelling You See. 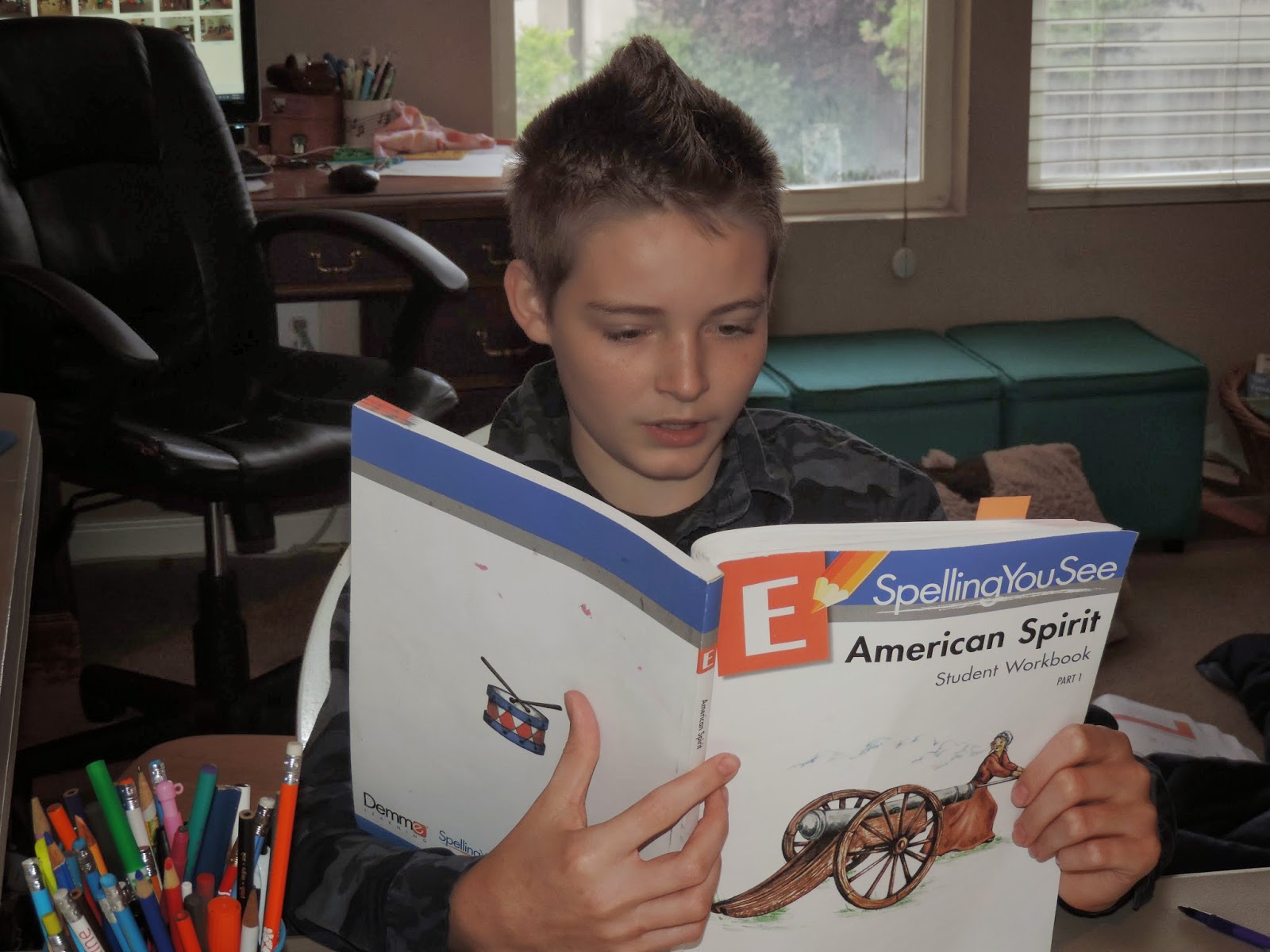 Being obsessed with flight, he's most looking forward to the passage about Amelia Earhart, which comes in book 2 of Level E.

Once Eli and I got started with this review, I realized this would be a great product for Jack.  I love the boy, but he's a deplorable speller.  When he does creative writing--it really IS creative!  I have to have him read his work to me because I truly cannot decipher what he's trying to say half the time.  I decided to get him Level C, Wild Tales.

Level C is a little bit different than Level E.  Most noticable is the fact that the Level C student books are landscape bound instead of portrait bound.  Inside, the biggest difference is that Thursdays, instead of doing dictation, Jack is instructed to draw a picture of the rhyme or write his own story.

While we're only a couple weeks in with Jack, I've noticed a difference in his dictation passages already.  The material he's been copying Mon.-Wed. comes out with much more recognizable spelling on Friday's dictation pages than his random journal entries or other free writing that he does. 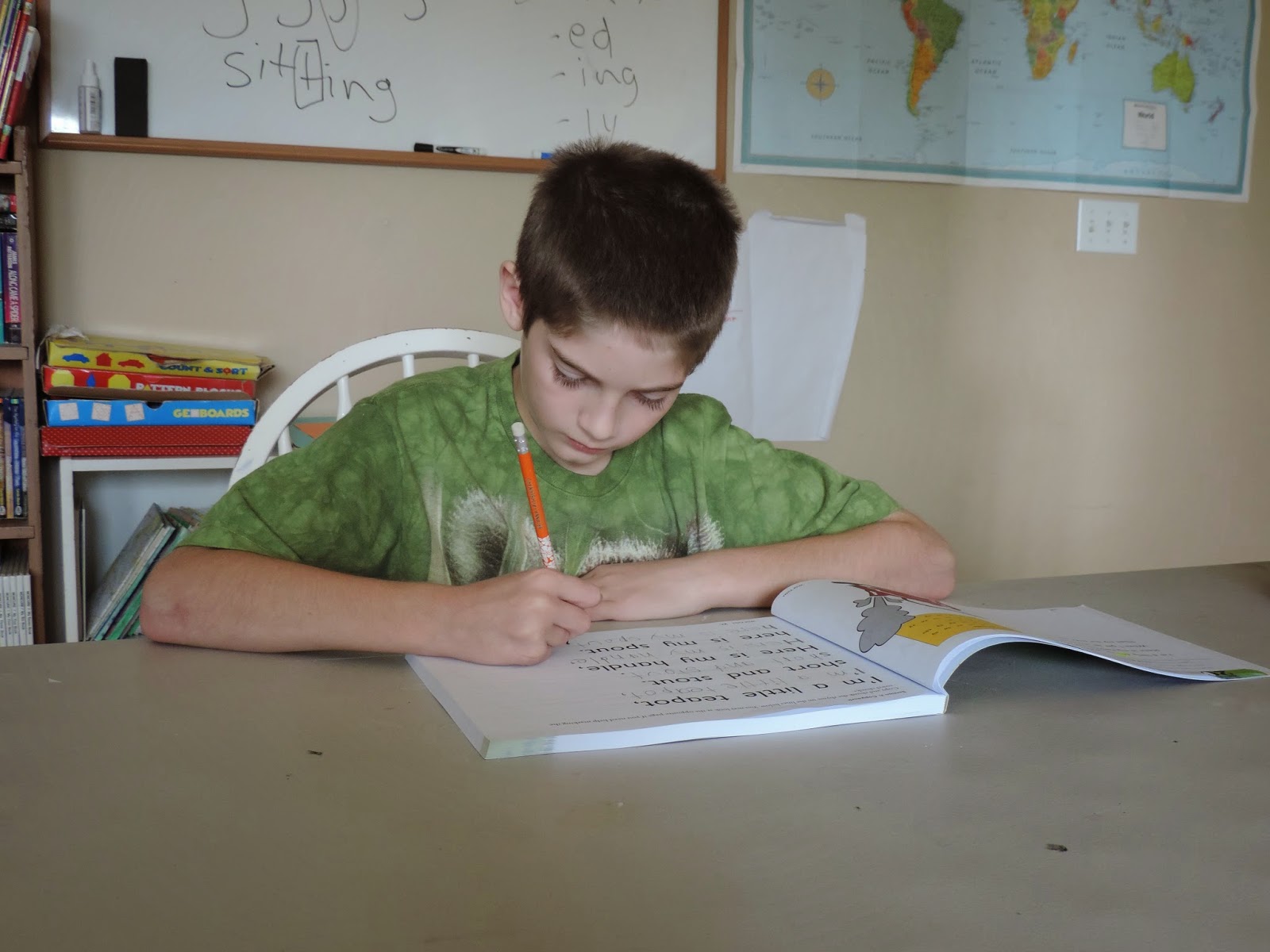 Since it only takes 10 minutes, it should be easy to convince him to work on spelling through the summer.  I have high hopes that Spelling You See might be the breakthrough we've been looking for that helps him catch up in reading and spelling. 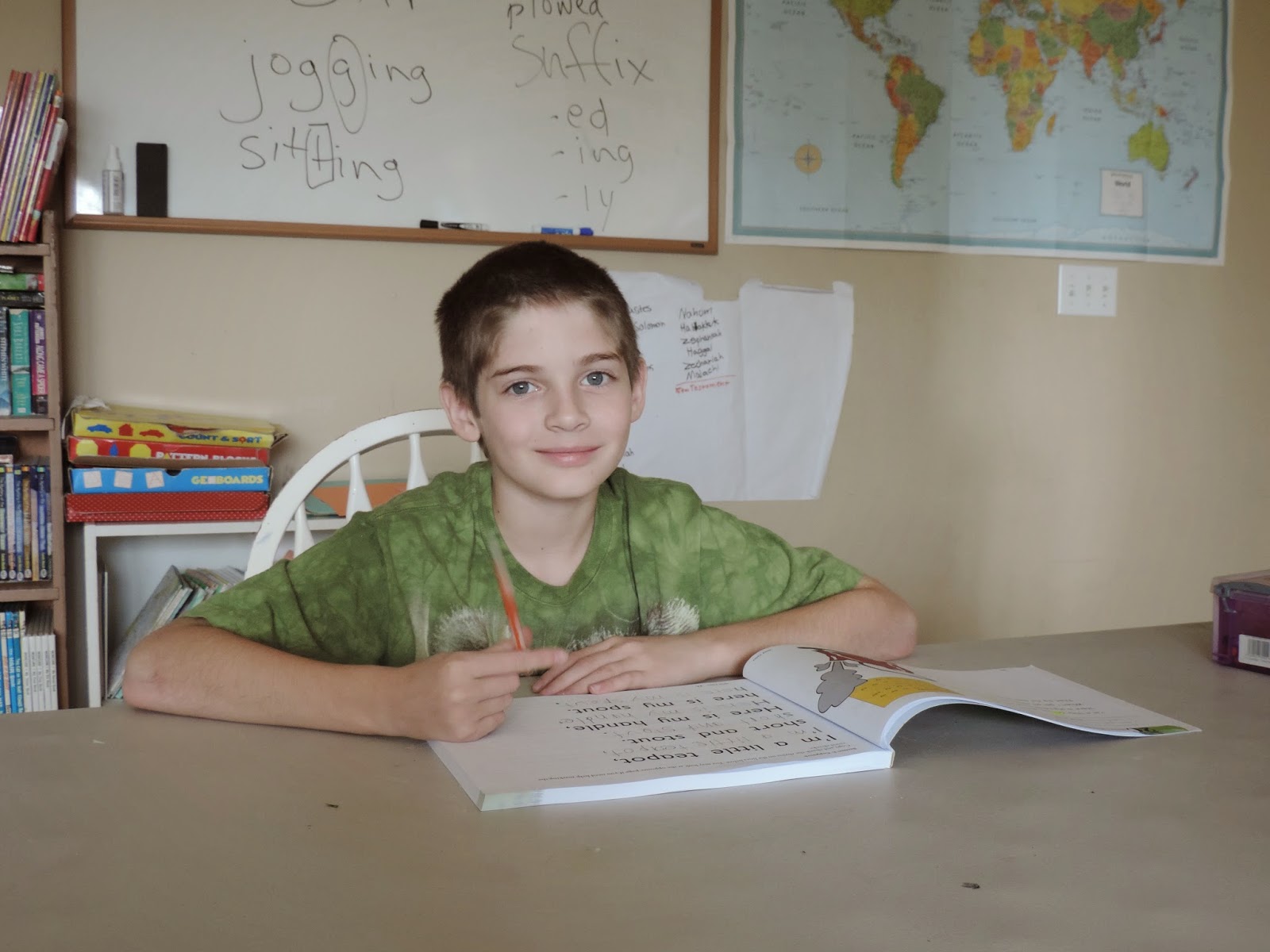 Two more levels are in the works (Level F, Ancient Achievements, sounds interesting!), but I don't know when they'll be released.  I am hoping that Level F comes out by the time Eli completes level E, because I would absolutely have him continue the program.

To read what more review families had to say about the other levels, please check out the rest of the Crew reviews by clicking on the box below: