Our Week with a Trip to the Pool 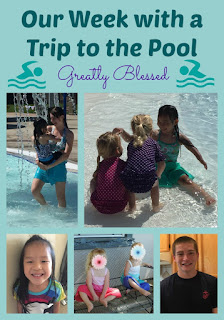 So last week, I showed a couple shots of the glider thingie (affiliate link) that we took to the park but couldn't get airborne. 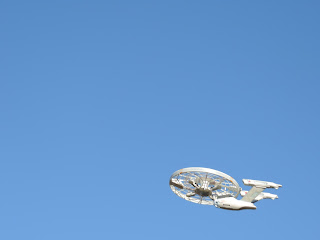 There it is, in the air!  I got about 4 shots before the battery ran out. 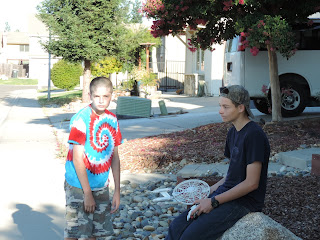 These are "bummer" faces.  So we charged it again, and the next day, the boys promptly flew it over the neighbor's fence.  And the neighbors were on vacation.  So it sat on their roof for a couple days.  We got it back last night and charged it up again, so hopefully there will be a chance to get more pictures soon.  So far, I'm not terribly impressed.  It's a lot of effort for a brief bit of fun.  But it was free, so I'm glad we got the chance to try it out. 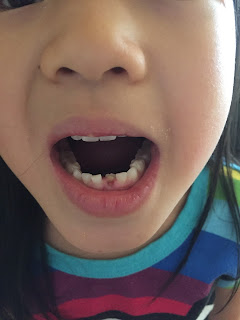 Little Miss Katie had a huge milestone!  Her first ever lost tooth!  (She's going to be 6 next month.)  Katie tells me that Hannah "helped" it come out.  Yikes. 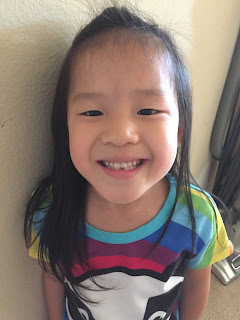 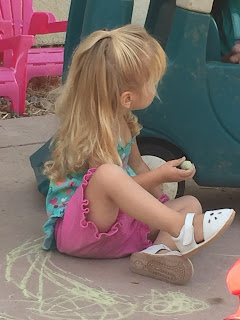 The week has been busy with keeping the Small Fries entertained.  This was our "dirty day" where they played in the back yard for a couple of hours while I sat in the sunshine with a book.  A good time was had by all, and I got some cute pictures of them riding the various ride on toys we have. 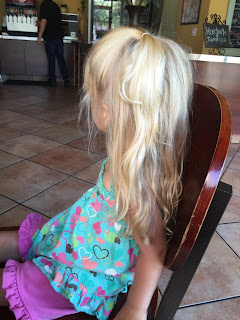 Waiting patiently for dinner to be ready.  We've done drive through and take out a few times recently. 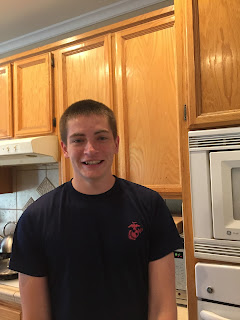 I keep meaning to share a picture of Sam in his Marines workout shirt.  My heart is so proud to see him jog past with a flock of other guys in their blue Marines shirts.  He leaves for boot camp in January. 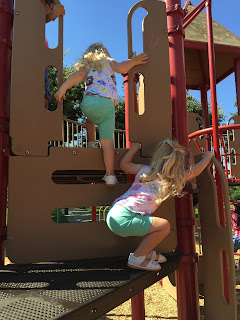 We have been spending a LOT of time at parks lately!  It's good to get out and run around.  It helps us all be ready for nap time. 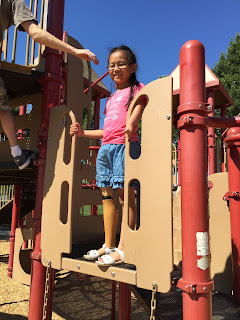 I had a picture of Katie, too, but after I uploaded it, I noticed one of the Little Ones' face was visible in the background. 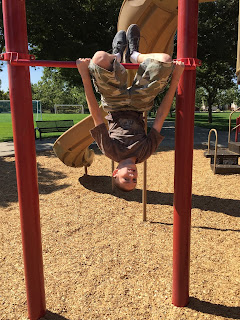 Eli was showing Jack how to do the bars, and I taught Eli how to get up without climbing over the top of the playground. 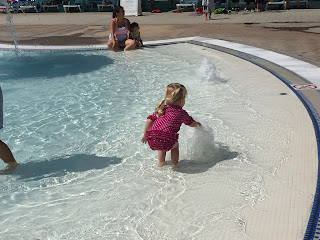 I've been wanting to get to the pool ever since it opened, but something always gets in the way.  I won't go on the weekend (too crowded).  And we couldn't go on days when Eli had afternoon practice (pool is open afternoons only).  So somehow, we made it all the way through June and July without going to the pool.  I felt like a bad mom. 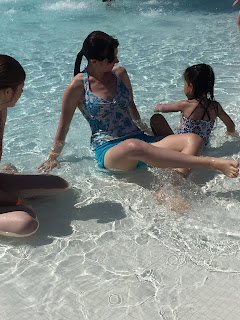 But!  Monday, we made it.  Actually, I brought 7 kids to the pool, and Bri and her friend A met us there, so I ended up bringing 9 kids home.  (Josiah doesn't like the pool.  Too people-y.) 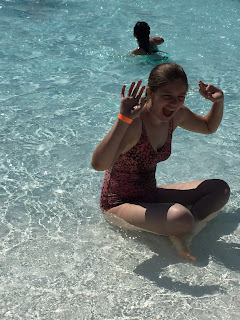 Not sure what A is doing here, but she seems happy. 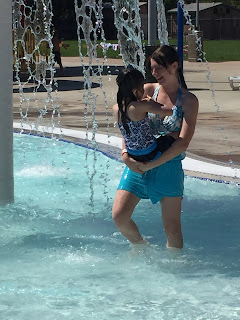 The lifeguard blew the whistle at Jack at one point because he was carrying Katie in the pool.  He couldn't hear what the guard was saying, so I went over to ask.  I explained, "She has one leg, so he was bringing her back to the shallow end, because she gets tired hopping."  I wasn't trying to play the pity card, just explain so he didn't think Jack was disobeying pool rules, but as soon as I said "one leg" he looked aghast and apologized over and over. 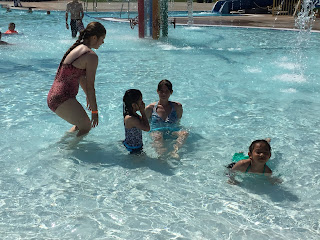 Hannah had a little girl ask what happened to her leg.  She said, "I don't feel like talking about that."  I was so proud of her.  I told her she could have said "There's a shark in the deep end."  She just made a face at me.  Katie was like, "There's a SHARK??"  She's still pretty literal. 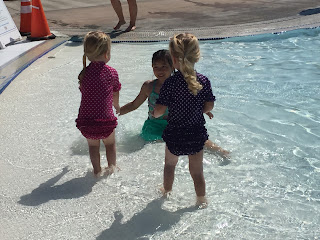 Our guests did okay at the pool.  Pink was braver at first, but once she fell over and got her face wet, she was much more cautious the rest of the time.  Purple took a while to warm up to the water, but once she did, she had more fun.  She even giggled when I'd chase her.  Pink decided she was more comfortable sitting on the side with just her legs in the water. 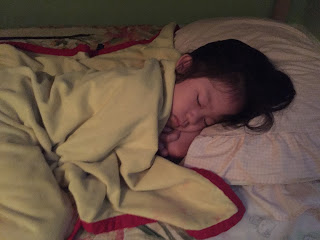 Pretty exhausting week this week.  Next week, Eli will be at football camp M-Th, which means there's a possibility I might get to sleep in on Wednesday.  (Monday is camp drop off and an appointment at Shriners for Hannah and Katie; Tuesday and Thursday, Josiah drills with the Army guys.)  I've been waking up before the 5:30 alarm lately, though, so I'm not holding my breath.