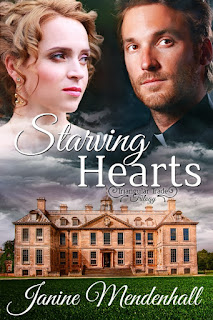 Starving Hearts starts out with a Annette being nearly assaulted.  It takes several more chapters for her to overcome the aura of "cotton headed ninny muggins" that you're left with in the beginning of the book, but she eventually shows herself to be a well educated, quick witted woman.

Peter has grown up as the second son of a wealthy man with vast international holdings.  In the era of "an heir and a spare," his brother is expected to take the reins someday, while Peter is left to find his own way in the world.  He chooses the clergy, and is moving toward a comfortable life as such, but his rare interactions with Annette leave him shaken.

Starving Hearts is not only a love story, but an adventure story, too, with kidnapping, peril on the high seas, and even a peg legged pirate.  Decades-old secrets come out in a climactic finish.


Will Annette's search for love and acceptance replace the loss and hurt in her heart? Find out in Janine Mendenhall's book one, Starving Hearts, of the Triangular Trade Trilogy. Since her assault, Miss Annette Chetwynd has been plagued by nightmares and worries about an arranged marriage. But she yearns to find her anonymous rescuer. Unfortunately, her health and intellect prevent it. Both repel suitors and cause Annette to doubt God’s existence, at least until He answers her prayers in an unusual way. . . .

Join in the search for love and acceptance with Janine and Starving Hearts by entering to win the Delightful Heart Gift Pack Giveaway.

One grand prize winner will receive:

Enter today by clicking the icon below, but hurry! The giveaway ends on September 12. The winner will be announced September 13 on Janine's blog.