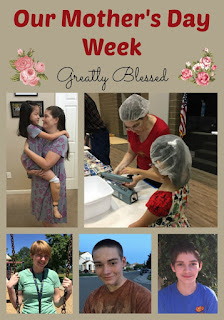 I'm finding that I'm not getting Our Week posted every week any more.  I'm not sure if this is the beginning of the end for my blog, or if I will find new things to talk about.  Transitions abound, that's for sure.

For now, we're just trying to get through the last couple weeks of school.  Everyone is looking forward to summer! 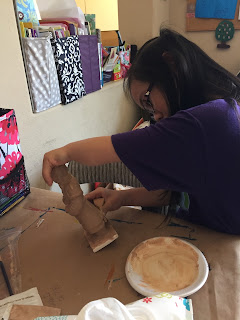 Remember our History Unboxed boxes?  Hannah got to do the terra cotta warrior project included in our China box because Jack had already made one when we studied about China 2 years ago. 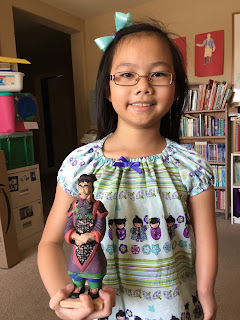 I really like the Art In History ceramic projects.  We still have some of the completed ones floating around here. 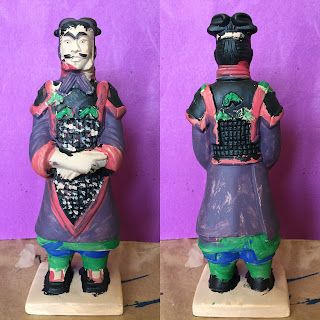 When we did the Egyptian Tomb Walls, I realized that the kids would have had more control with a permanent marker than with a paintbrush, so I had Hannah do some of the black detail work with Sharpie. 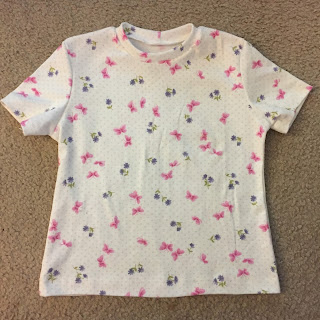 I finished another PJ top for Katie, to match the previously shown pajama shorts.  2 down, one to go. 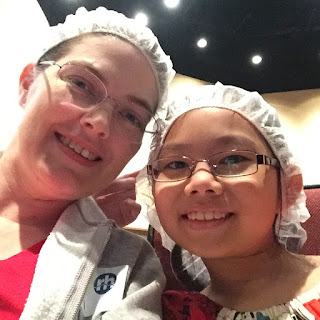 I've been thinking a lot about how I will use my time once I'm no longer homeschooling.  Sure, there are projects around the house that I've been putting off that I will get to, and I'll have this entire room to sort through, but I am very drawn to spending my time making a difference.

I've been watching the Feed My Starving Children website for about a year now, waiting for a mobile pack event to happen near us.  A couple of times, there's been a local one, but the sign ups filled before I saw it.  So I was very excited to get the opportunity to participate this time! 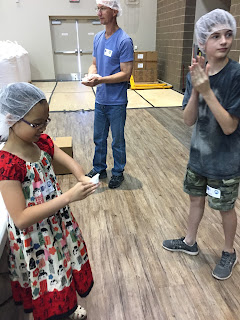 What's even better is that I took Jack and Hannah with me.  Here we are, hairnets on, getting scrubbed up to pack meals for kids in need. 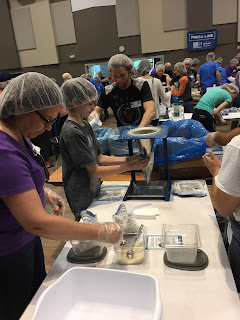 Jack Jack was on the funnel.  He held the bags in place while the scoopers at the end of the table poured the 4 ingredients (veggies, soy, vitamin powder, and rice) into the funnel.

Then he passed the bag to the weigher, in the purple shirt.  Her job was to make sure it was between X and Y # grams.  She could add or subtract a little rice to make it just right. 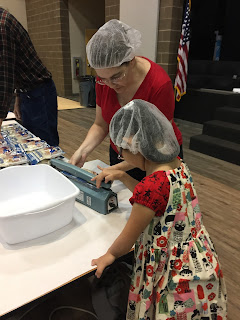 Hannah and I were on the sealing machine.  I took the bags from the weigher and held them in place, while Hannah brought the bar down and held it until the light went off. 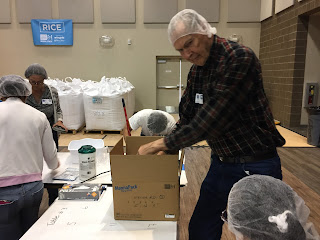 This was our boxer.  His job was to take the bags and stack them in piles of 2 until we had 36 bags, then put them into a box.  The warehouse runners would then whisk the box away.  Our team (which included another funnel on the other table) packed about 5 boxes every 10 minutes.  Each bag contains 6 meals. 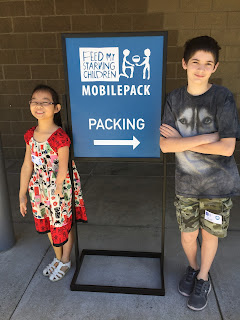 These particular meals are headed to Nicaragua.  We had a great time packing, and I hope to participate again the next time there's an event near us.  During our volunteer session, enough meals were packed to feed 78 children for a year! 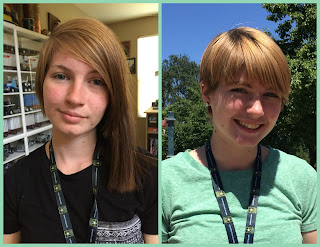 Brianna has had lopsided hair for a while, since she shaved part of her head last year.  It was growing out, and she decided it was time for a cut that would even things out. 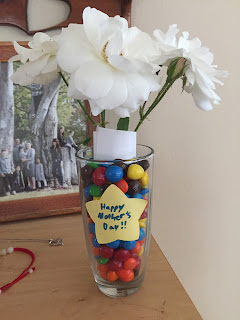 My Mother's Day present from Josiah. 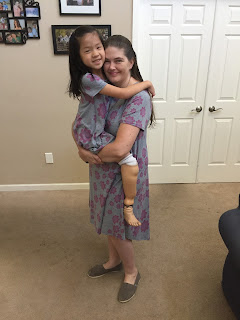 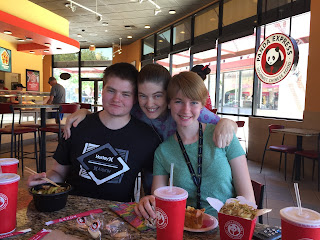 These guys took me out to a yummy lunch at Panda Express. 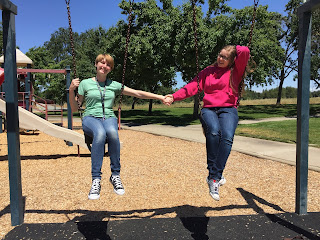 Then we went to the park. 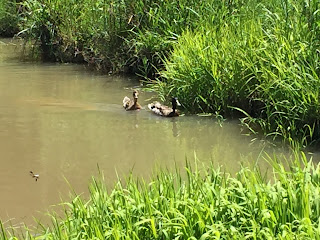 We walked along the creek, where we saw ducks, turtles, and tons of dragonflies. 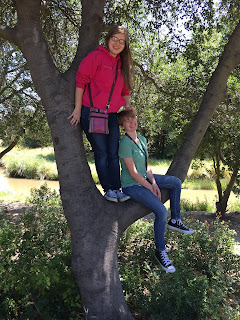 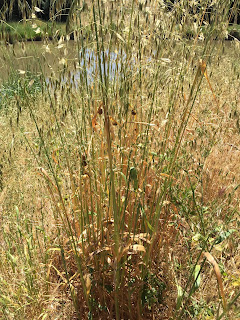 We even found a snail bush! 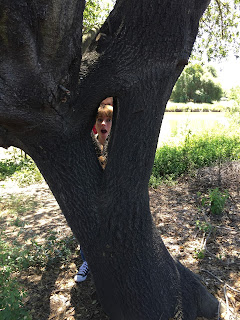 And a tree with a hole in it.  It's neat to see all the interesting things we can discover if we take the time to explore.  We walked about a mile, just hanging out together. 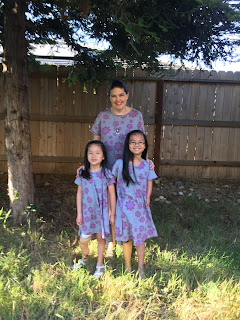 I had wanted to get pictures of everybody again this year like I did last year, but that just didn't happen. 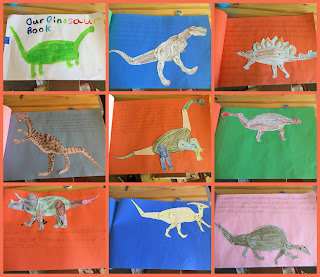 We finished the Dinosaur Book that we created from the Dinosaurs on the Move book we won from Figures In Motion.  I'll be a little sad to see all our historical figures come down when we finish up our homeschool year, so I'll probably turn those into a book, too. 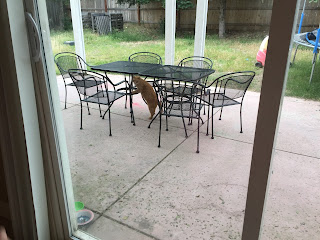 Wheelie the cat, checking out my new patio tables and chairs, a Mother's Day gift from Paul. 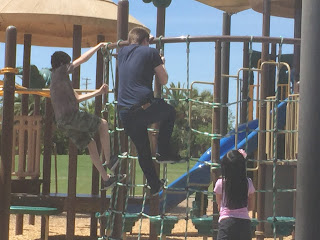 We went to the library this week, and it was nice enough to play at the park for a while.  I would have taken more (better) pictures, but I was chatting with a friend. 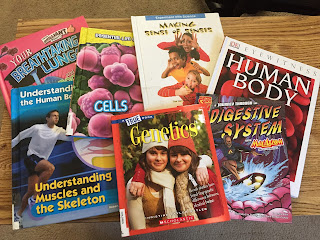 Can you guess what we're learning about right now?  As we finish up our school year, we're finishing off a lot of our books.  I decided to pull out My Body and get one last use out of it.  I bought this book ages ago, when we lived in Santa Rosa, and I used it with Zach, Annaliese, Josiah and Samuel there.  Then a few years ago, I used it when I taught at homeschool co op.  Now I'm using it one last time with Jack, Hannah, and Katie.

I've started a pile of the homeschool materials we're done with, and I'll be adding My Body to it soon.  I hope some other family gets as much use out of it as we have.