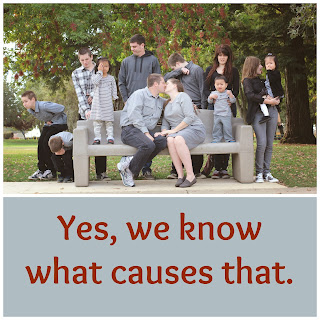 I'd like to write about having a big family.  "Big" varies in definition from person to person, but I'm pretty sure we qualify.  We've gotten a lot of comments over the years, so I'll start with some of those.  If you have any questions you'd like answered in another Large Family post, please comment!

Since the kids all have chores, the house is usually picked up, but not totally clean.  The teen boys take turns with Dinner Clean Up, Josiah takes the garbage and recycling out, Brianna does Lunch Clean Up, Eli does Breakfast Clean Up, Jack empties the dishwasher and dishrack, Hannah empties all the wastebaskets and brings the upstairs laundry down to the laundry room for me, Hannah and Katie fold napkins together, and they ALL pitch in and help with extras as needed.  We have 5 bathrooms, and none of them get as clean as often as I would like.

I guess I think of organization as "the absence of little piles o'crap everywhere."  I haven't achieved that yet, so I don't consider myself organized.

You must be so patient!  Again, not so much.  I throw shrieking tantrums just as often as the kids do, actually.  As I get older, it gets easier to lower my expectations and just roll my eyes at them, but the fact of the matter is, I still live with 8 kids, and that's no easy feat.

What does your husband do?  The implication is, "How on earth are you supporting that herd?"  I get it.  It looks impossible.  2 things:  God's blessings, and prioritizing.

When we were young, and the babies were coming every other year or so, every time we had a baby, Paul got a raise (or a better paying job).  The earliest years were hard!  Like, rolling coins out of Zach's piggy bank to make the rent kind of hard.  But as we grew up and Paul began earning more, it got easier.  Also, having a big family usually means you get hand me downs.  People clean out their one or two kids' closets and give those too many clothes to "that family with All Those Children."  That saved us a huge amount over the years.

We've said no to a lot of things.  We don't have all the kids in 3 different activities apiece.  (I'd lose my ever lovin' mind, for starters.)  We don't do annual vacations, as much as I would love to.  Paul is super frugal.  He often takes food to work with him so he can make lunch instead of eating out.  I try not to drive my monster van out of town much, so we don't do all the homeschooly things that happen around the county. 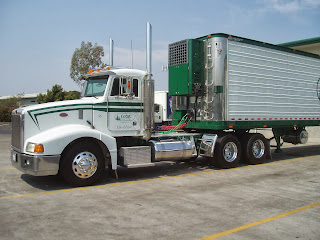 When we married, Paul drove a truck.  Now, he's a fire captain. 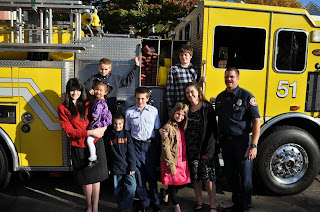 He works hard for our family.  And God has blessed us because of his hard work.

I'm not a saint.  I'm not a super mom.  It takes me 20 days to read a 12 chapter bedtime story to Jack, and I've been known to tell the children to forage for their dinner (not the youngest 3, of course).  But we have a lot of laughs around here, and if there are things I can share to make the road easier for another mama who isn't yet where I'm at, I'd love to pass those along.

I remember as a young mom, that light bulb moment when you hear someone else's brilliant idea and think, "Why didn't I think of that?  That will make my life easier!"  Those are the things I wish someone had told me when I was in The Boot Camp Years (which I define as having 3 or more kids, the oldest of which is not able to shower alone yet).

One of those things was so simple.  Put your squirmy toddler in overalls on grocery shopping day.  This was a tip I got when Samuel was the toddler.  Sam was the ADHD toddler, lol.  He walked at 11 months, and ran about 5 minutes later, and hasn't been still or quiet since.  When I despaired of keeping him in the grocery cart (because he could unbuckle the safety belt) another mom told me to buckle it under the bib of his overalls, where he couldn't reach it.  I could have kissed her.  Okay, maybe not really, but I was pretty excited to try that one out.

Samuel still managed to unbuckle the belt under the overall bib, but it took about 3 minutes longer!  But the truly beautiful thing was that the idea made me think outside the box, and the solution I found was to unbuckle his overalls, loop them through the back of the cart seat, and refasten them.  With BOTH precautions in place, he could no longer stand up in the cart the second my back was turned.  Eventually, he learned that he couldn't get out, and didn't need me to strap him in quite so securely any more.  (Fortunately, Osh Kosh overalls wear like iron, and we had several pairs from Zach and Josiah.)

Another thing I wish I could tell every young mom is not to box herself into homeschooling.  I've always said, "We're homeschooling," as opposed to, "We're homeschoolers."  It's a small distinction, but an important one.  If being a homeschooler becomes your identity, and you end up making another educational choice down the road, guess what?  You'll feel like a failure.

Now, hear my heart:  Homeschooling is awesome!  I'm all in favor of it.  And it is a commitment.  You have to really give it a good try before deciding that it's not working.  But sometimes the best place for a particular child a particular year is a classroom.  After all, aren't we trying to make the best decision possible for each child?  That's why our motto is, "Education is a year by year, child by child decision."

I know I've talked about this over and over, but it's really important to me.  We don't always get it right, but we are trying to make the best possible choices for each of the kids.  Which ends up being a lot more work, honestly, than just homeschooling the lot of them.  Not only do I have all the work of homeschooling, but I'm also at the mercy of not one but TWO different school's schedules.

A practical tip for moms with several kids is to color code things.  We've color coded many different items over the years.  We have a set of Tupperware tumblers similar to these

(affiliate link) that I bought several years ago.  Each child has a color.  Our set came with six, and our #7 at the time was still using sippy cups, so it worked out well.  Tupperware has a lot of "character" options, so you could do a plain set for the older kids and then add on single tumblers in Hello Kitty or Buzz Lightyear or whoever is popular with your younger ones.  At the time, this was an answer to a big problem for me:  47 cups in the sink from the kids getting "a drink of water" all day long.  Other moms have resolved this by having each child keep their cup on a specific tile on the kitchen counter, or a circle on a cookie sheet.  That way all the cups are contained.  If you're going to buy a set of Tupperware cups, consider finding someone who is having a party as an adoption fundraiser and bless them with your order.

One year for Easter, I got each of the kids their own POOL TOWEL.  I was given a monster sized Lands End tote for Christmas from my MIL, and that became the pool bag.  Getting everyone their own color towel eliminated the "that's not my towel" argument.  I knew if I saw a blue towel on the floor that it was Josiah's.

I color coded their flip flops when they were younger, as well.  Red for Sam, yellow for Eli, green for Jack... same colors as their cups and towels.  Now, those are the colors I use for their folders in my school file.  Each of the kids has a fat file of papers that I've saved for them.  Report cards, standardized test scores, writing assignments, Mother's Day cards, special artwork, etc.  Those folders are color coded, too.

I've always wanted to have a large family.  I really do feel that I am Greatly Blessed.  But that doesn't discount the fact that it can be a huge responsibility and a lot of work.  I'd like to do a couple more posts on this subject, so if there's anything you want to know about having a big family, please ask!