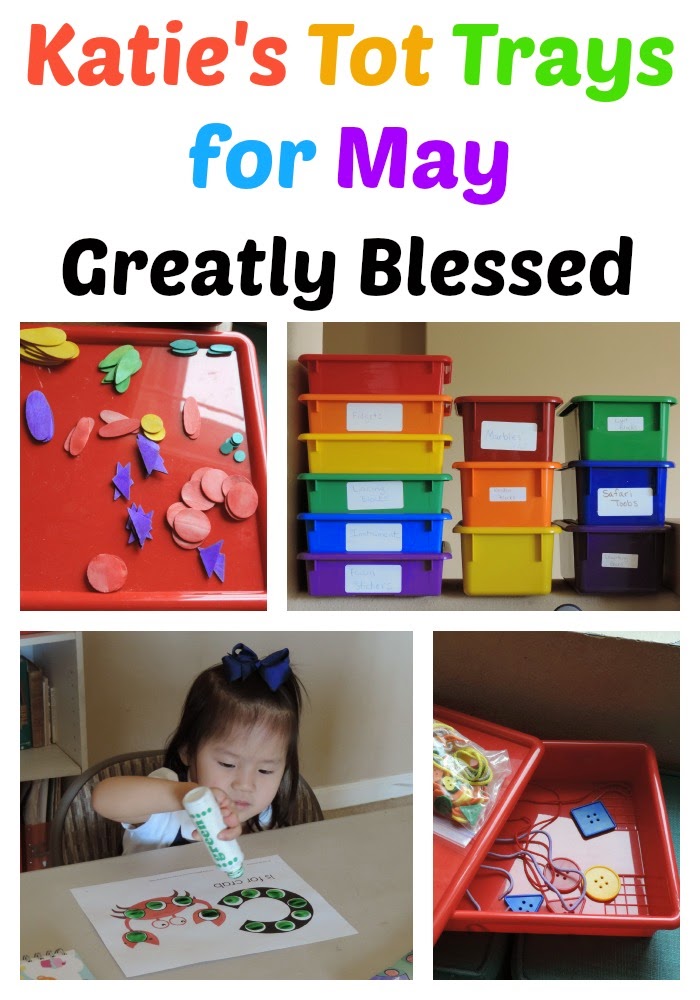 So many people wonder, "What do I do with my little kids while I'm homeschooling my older ones??" 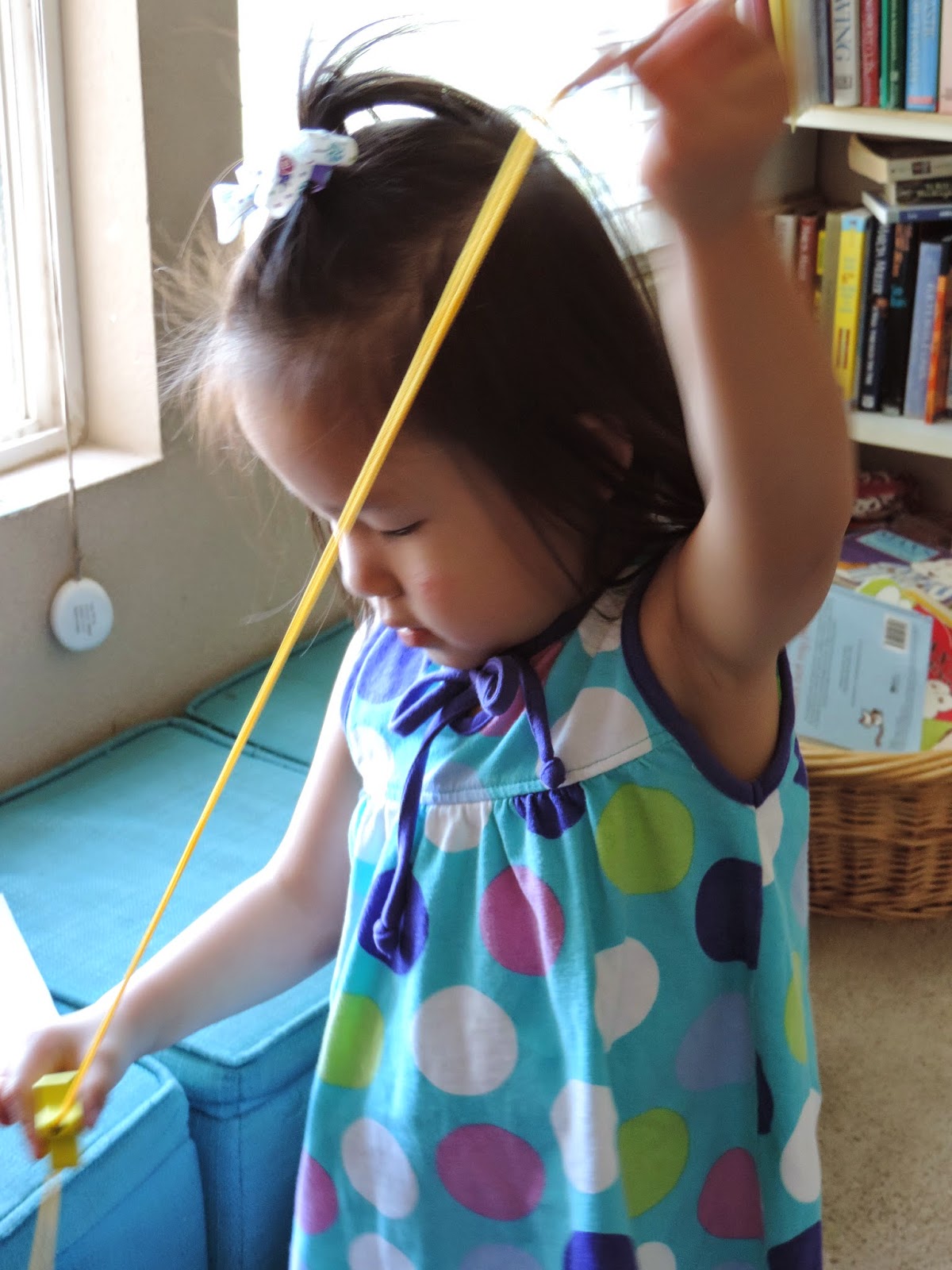 Well, there are as many answers as there are families, of course, but I'll share what we've been up to, to give you some ideas you might want to try out at your house.  I'll even include helpful affiliate links, for your benefit.  (wink) 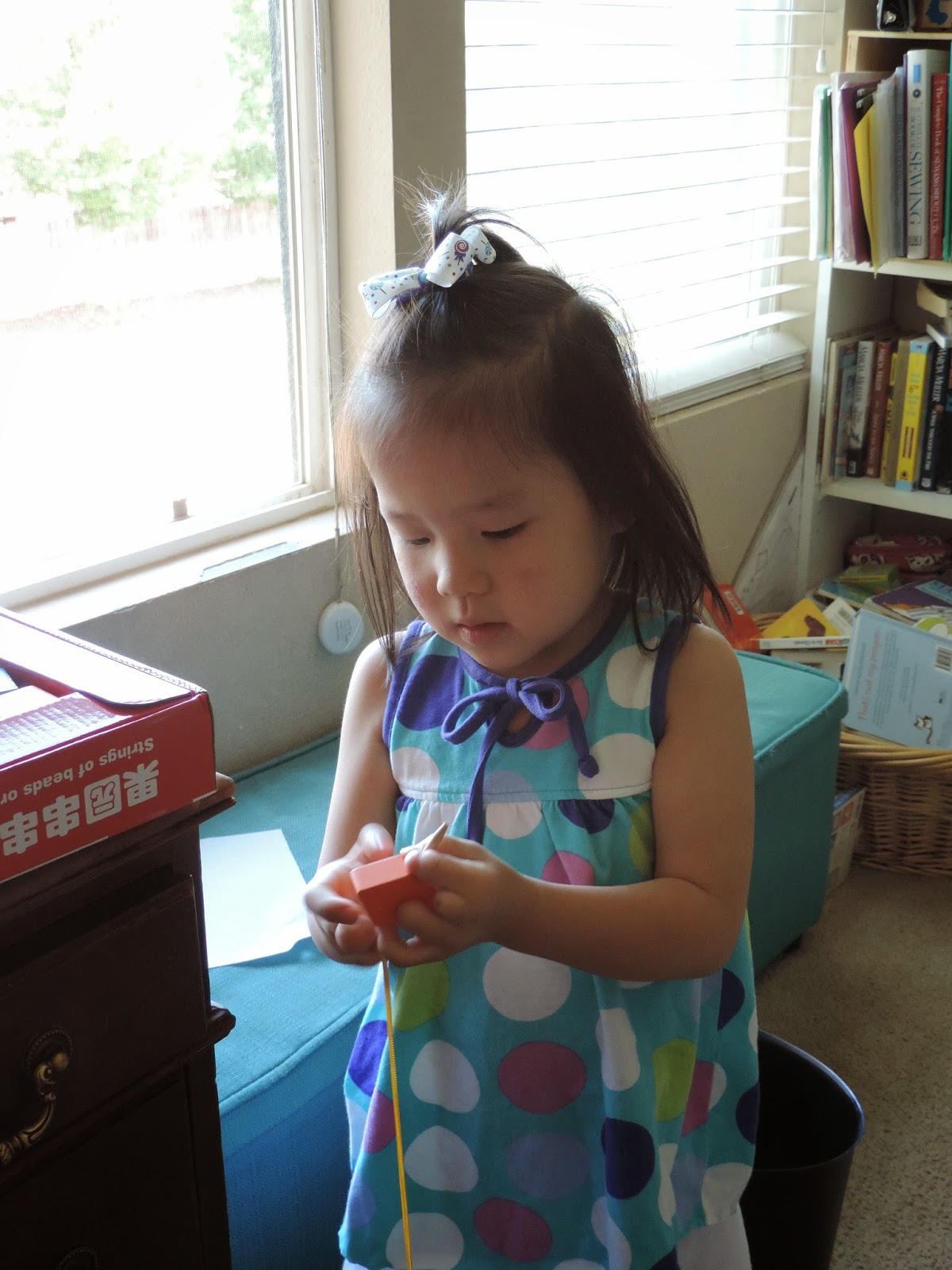 I'm always anxious to include fine motor skills activities for Katie (and Hannah) because of her finger differences.  I want to make sure she's managing well (which, she is, of course).  But even typical-limbed preschoolers benefit from fine motor skills exercises.  Not only in terms of manual dexterity, but also in helping them learn to focus and stay on task. 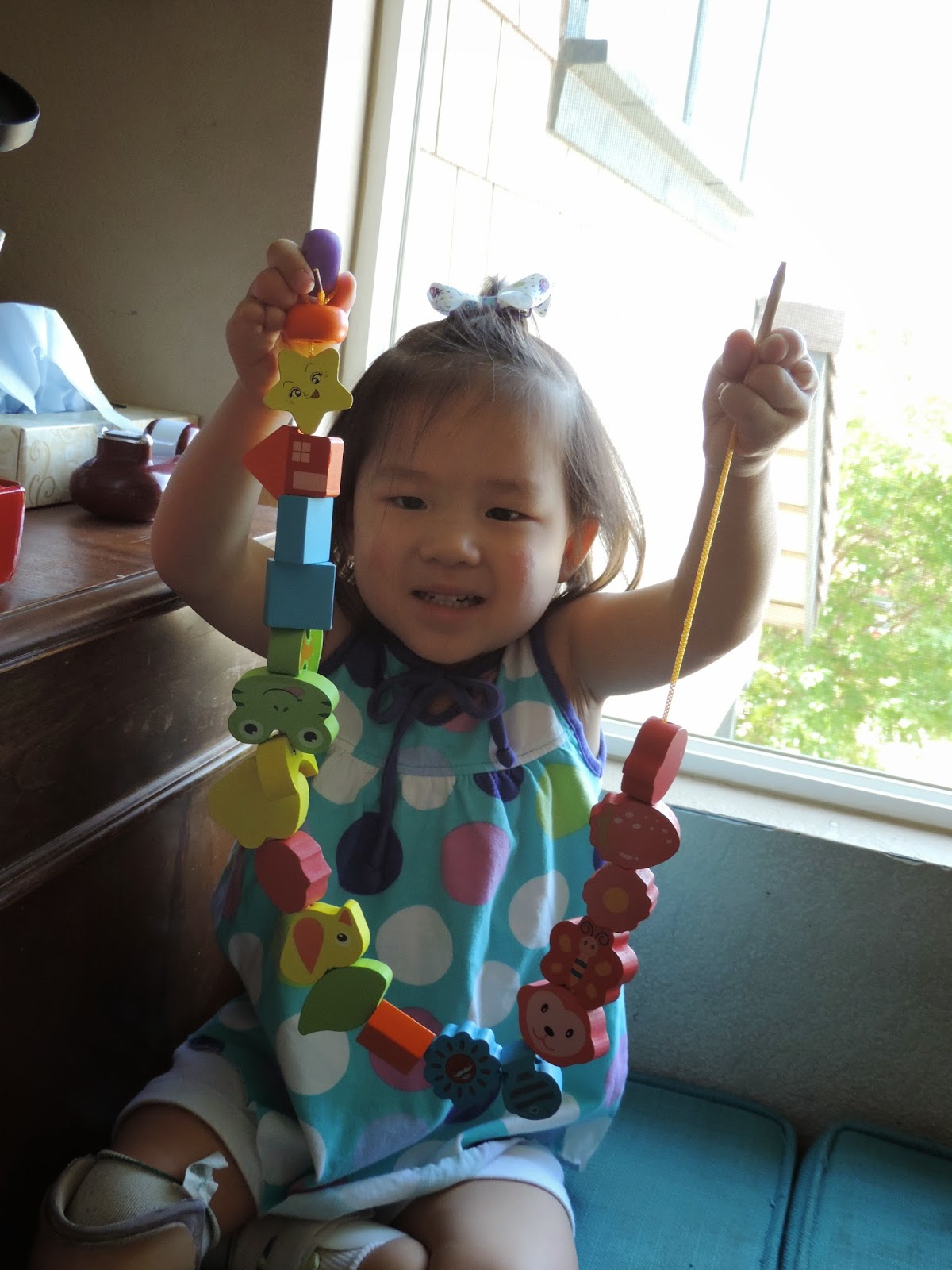 Look at that cute face!  So proud of her success!

There are lots of wooden lacing beads

out there.  I picked these

because they're cute, and because they have the wooden "needle" at the end of the string, which makes it easier for beginners.

In addition to stringing, you can also see how many your child can stack in a tower, or make a picture scene, or sort by color, or sort by type.  These are more open ended than round beads. 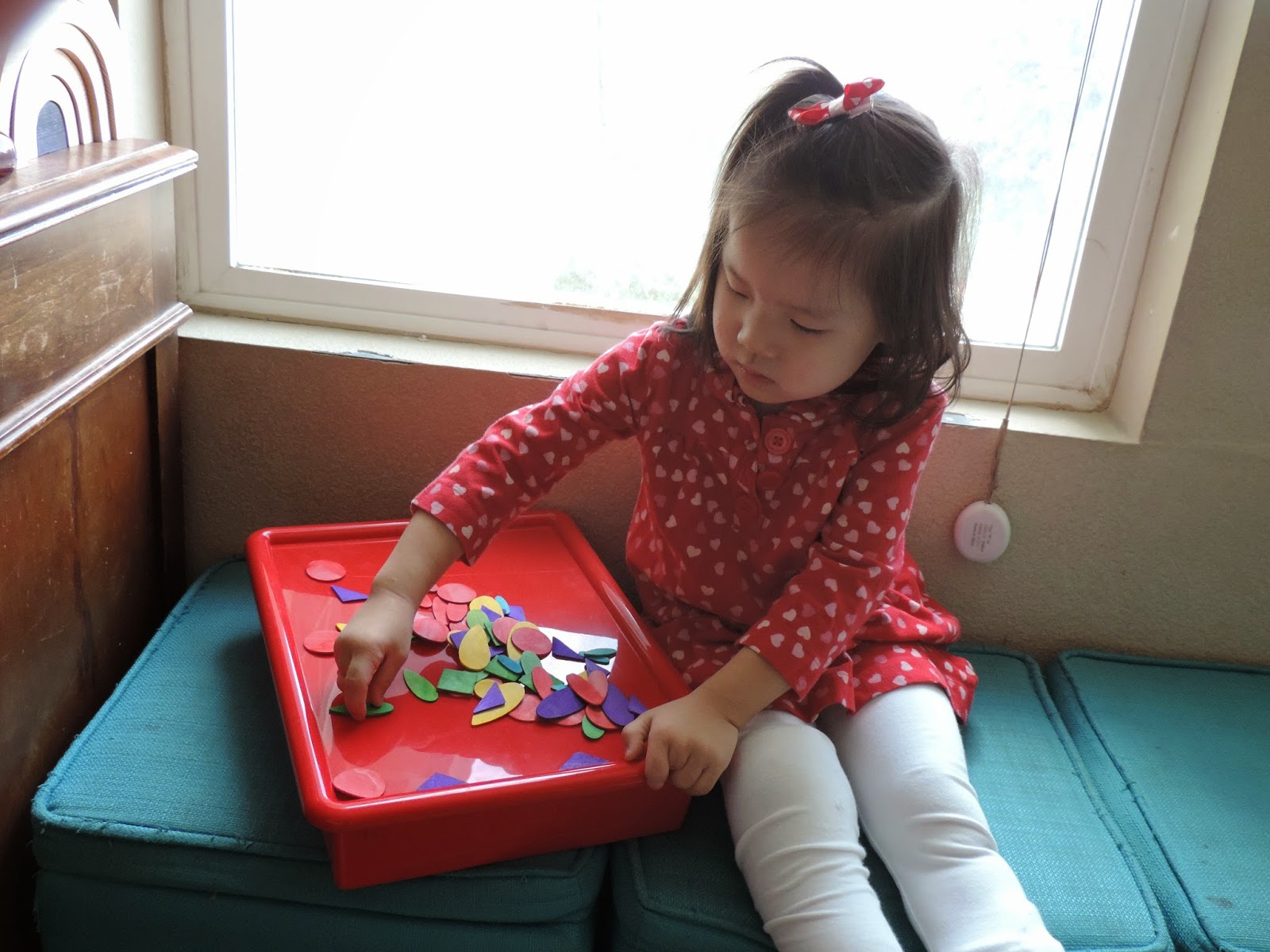 I was recently cleaning up the school room and ran across these colored wooden shapes.  Aha!  Perfect for a tot tray!  I was thinking "mosaic" when I put them in front of her. 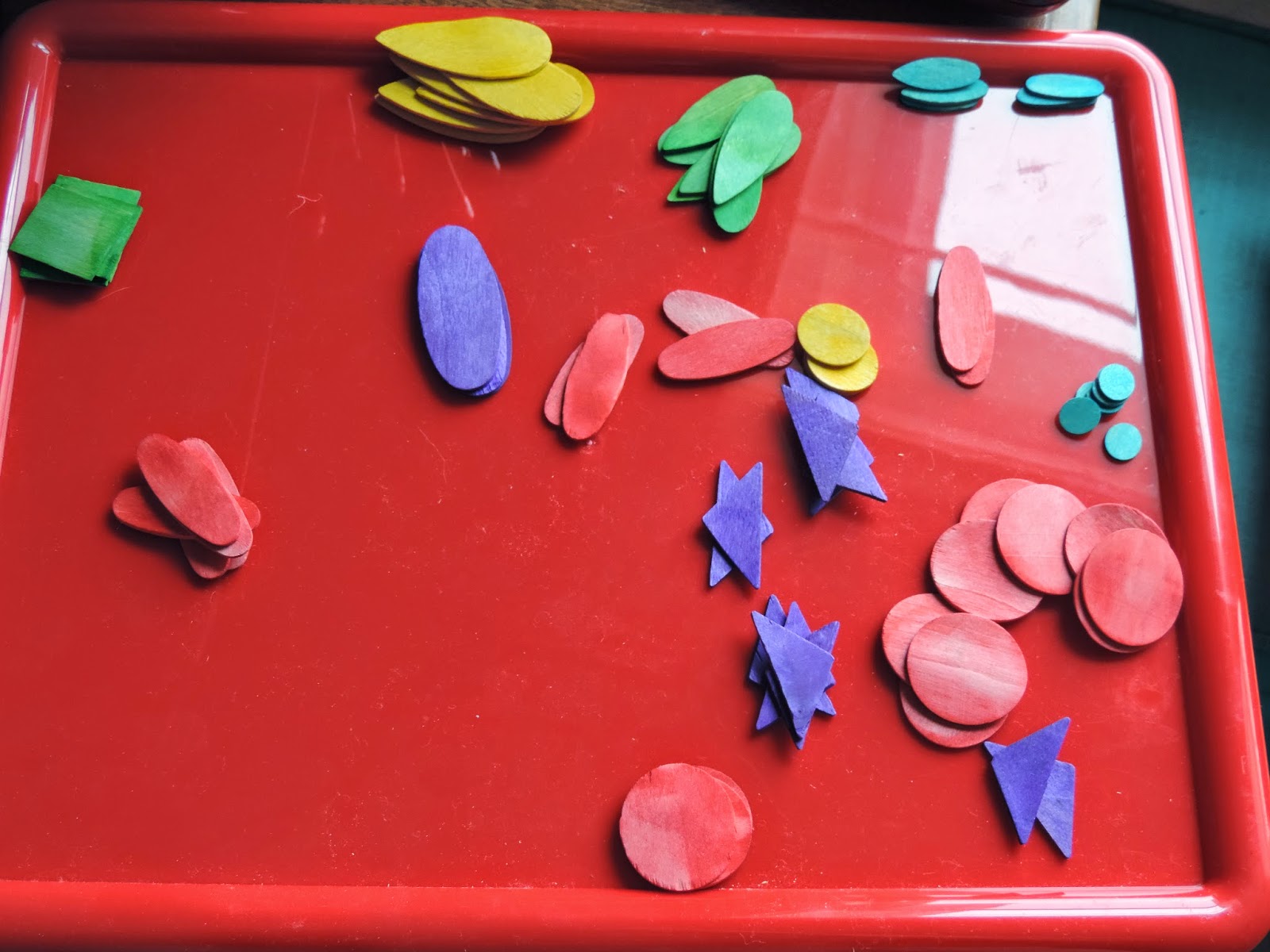 But it looks like she was thinking "sorting/matching" instead.  That's okay!  It's all good.

Now, some of you may be thinking, "What's a Tot Tray??"  Well, I'm hardly the first to coin the phrase.  A Tot Tray is simply a single activity, in a container, designed to facilitate learning for your little one.  It can be a directed activity or an open ended collection of objects.  It lasts as long as it holds your child's interest.  Some trays hold their attention longer than others, and it's not always the ones you think!

The red tray shown came from Lakeshore Learning, as did it's fellow trays, which hold all sorts of fun things in the school room: 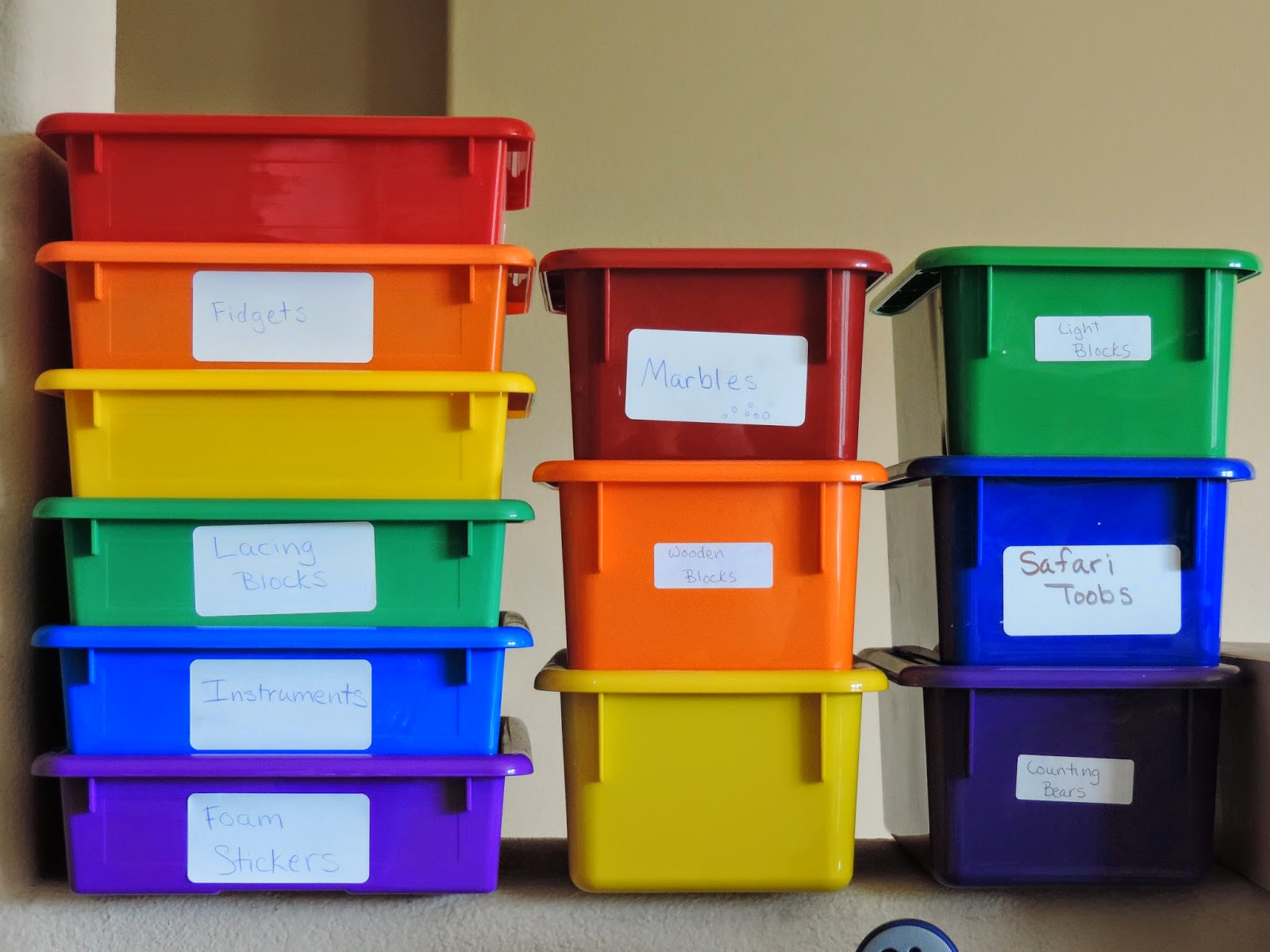 It works better for us to have these things in stacking boxes than in all sorts of random shaped containers. 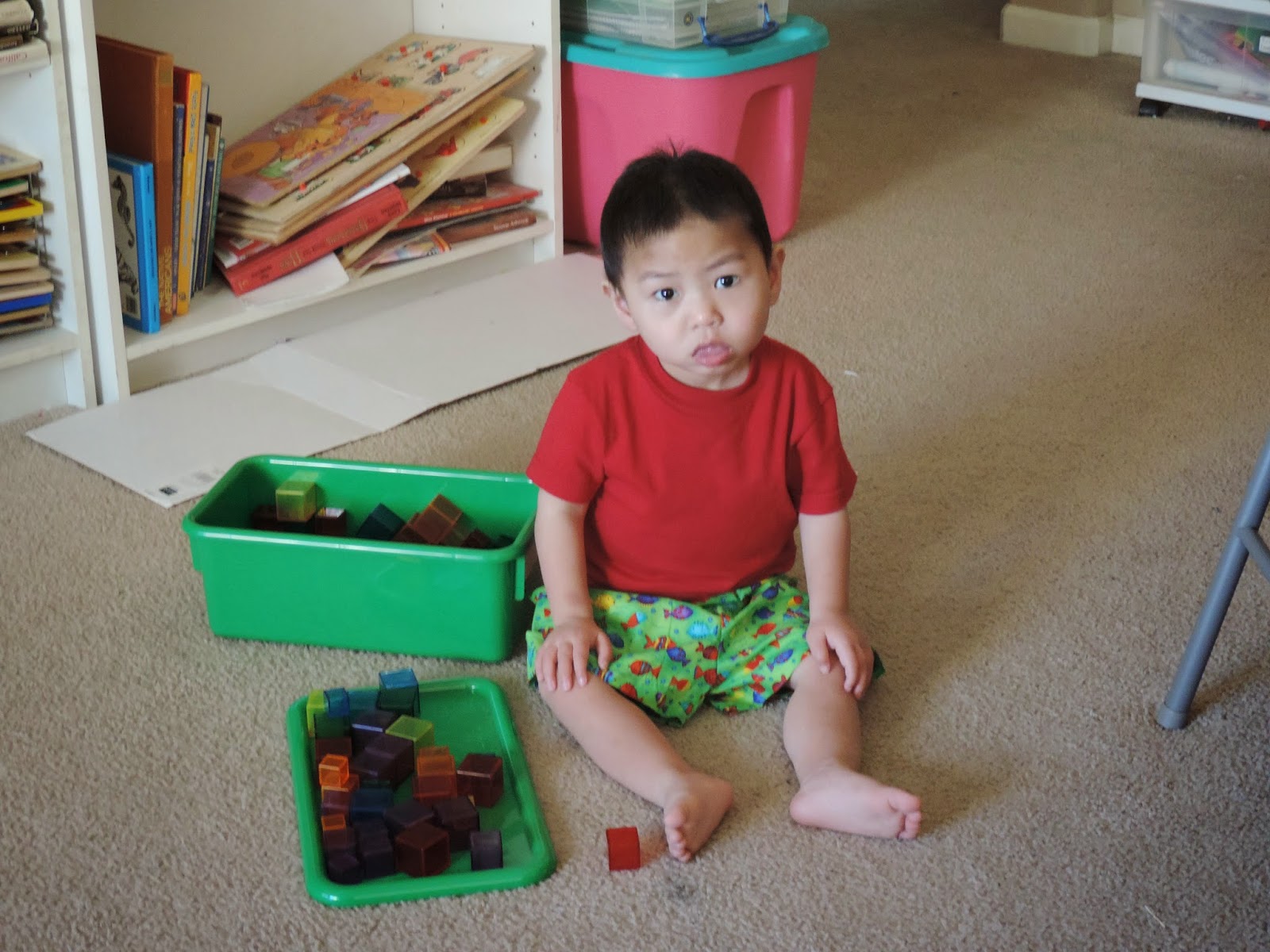 I offered Lukey the light blocks the other day, but he wasn't interested.  I thought he might try to see if they were food, but he wouldn't hold them at all. 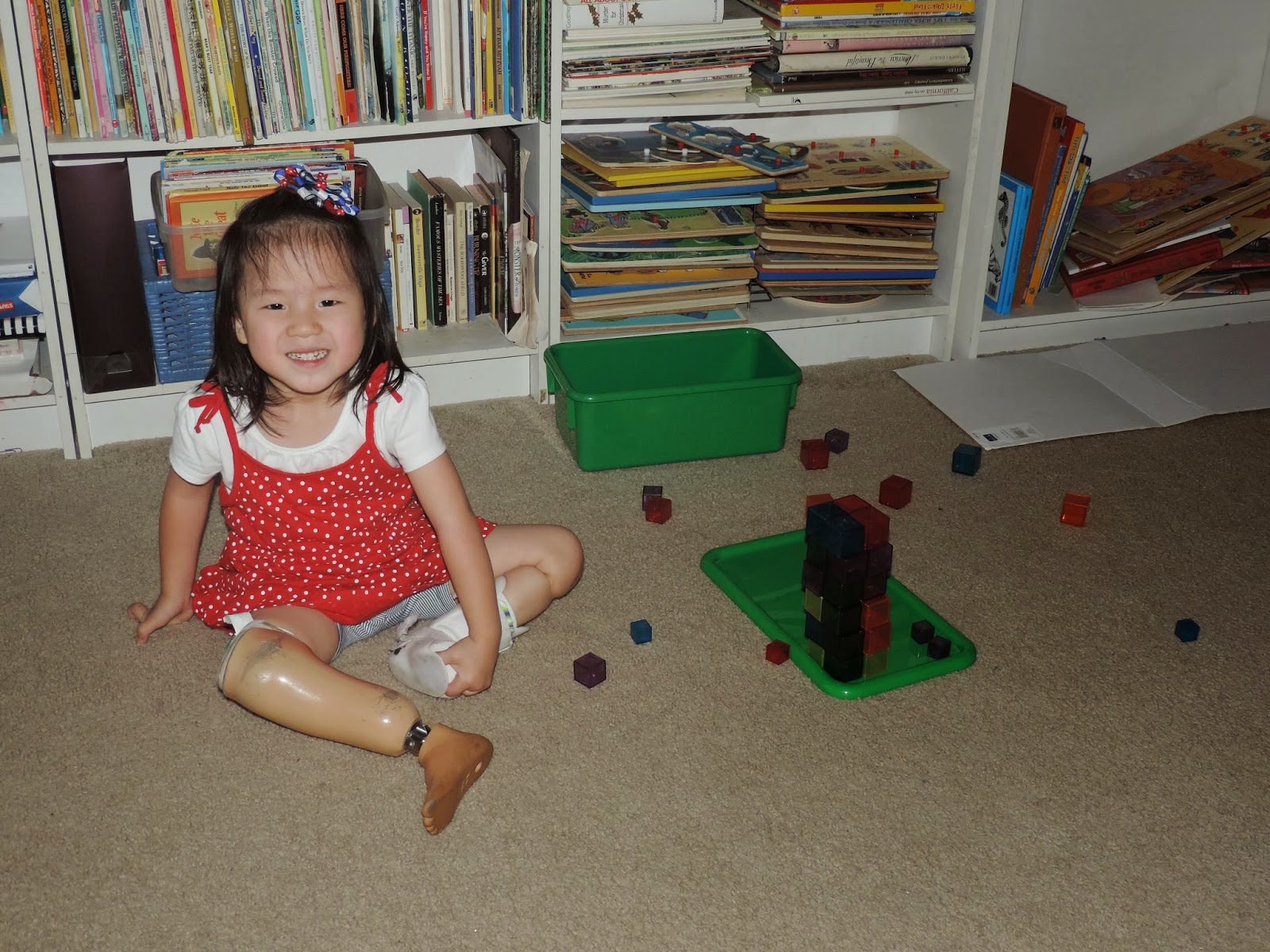 Katie, on the other hand, loves the light blocks.  She likes to pick 2 large ones of the same color and hold them up to her eyes to look through them.  She built this and then told me, "Mommy take a picture my blocks house!" 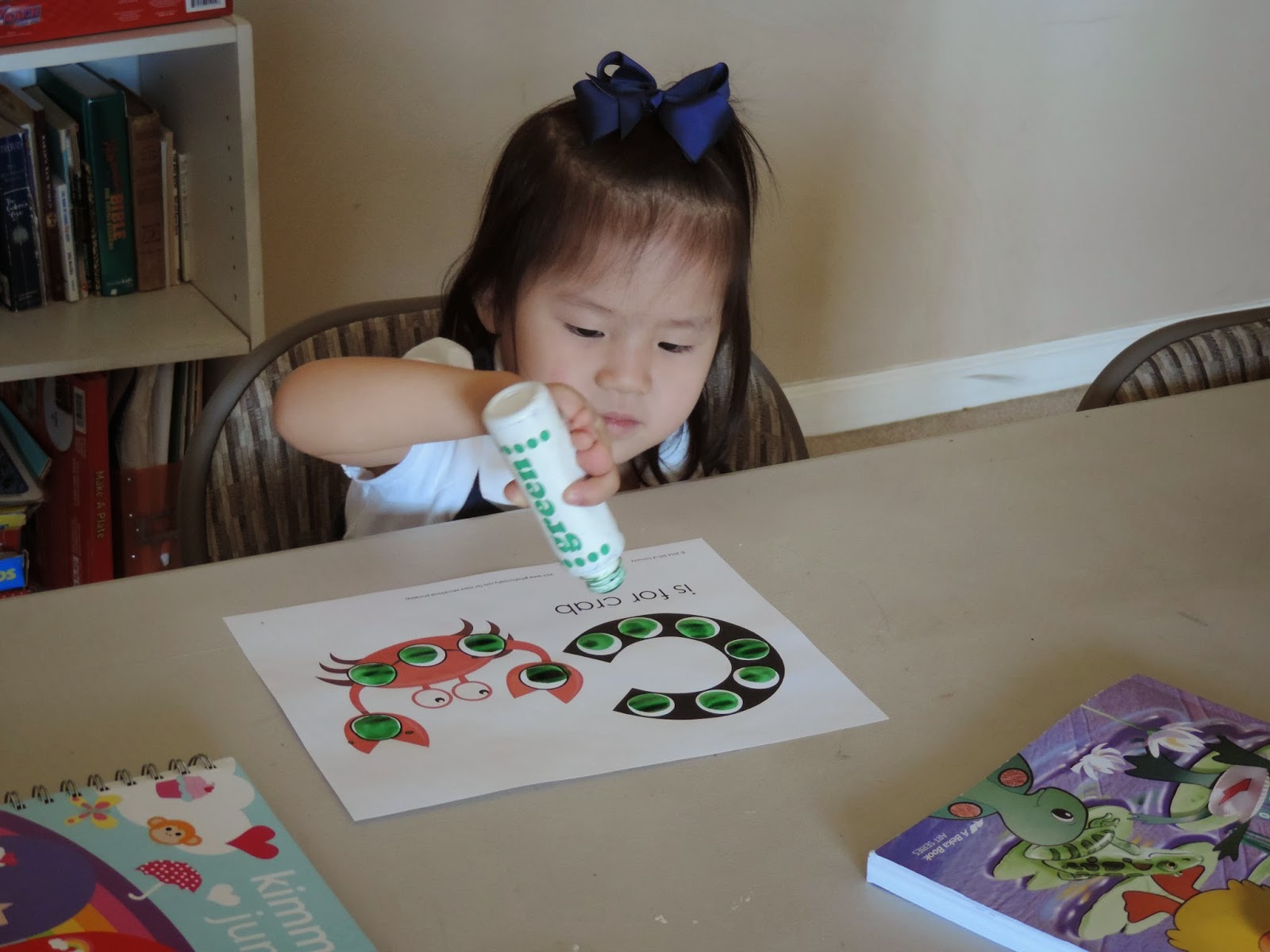 I recently ran across some printable dot marker pages, so I put some of those and some dot markers in Katie's tray one day. 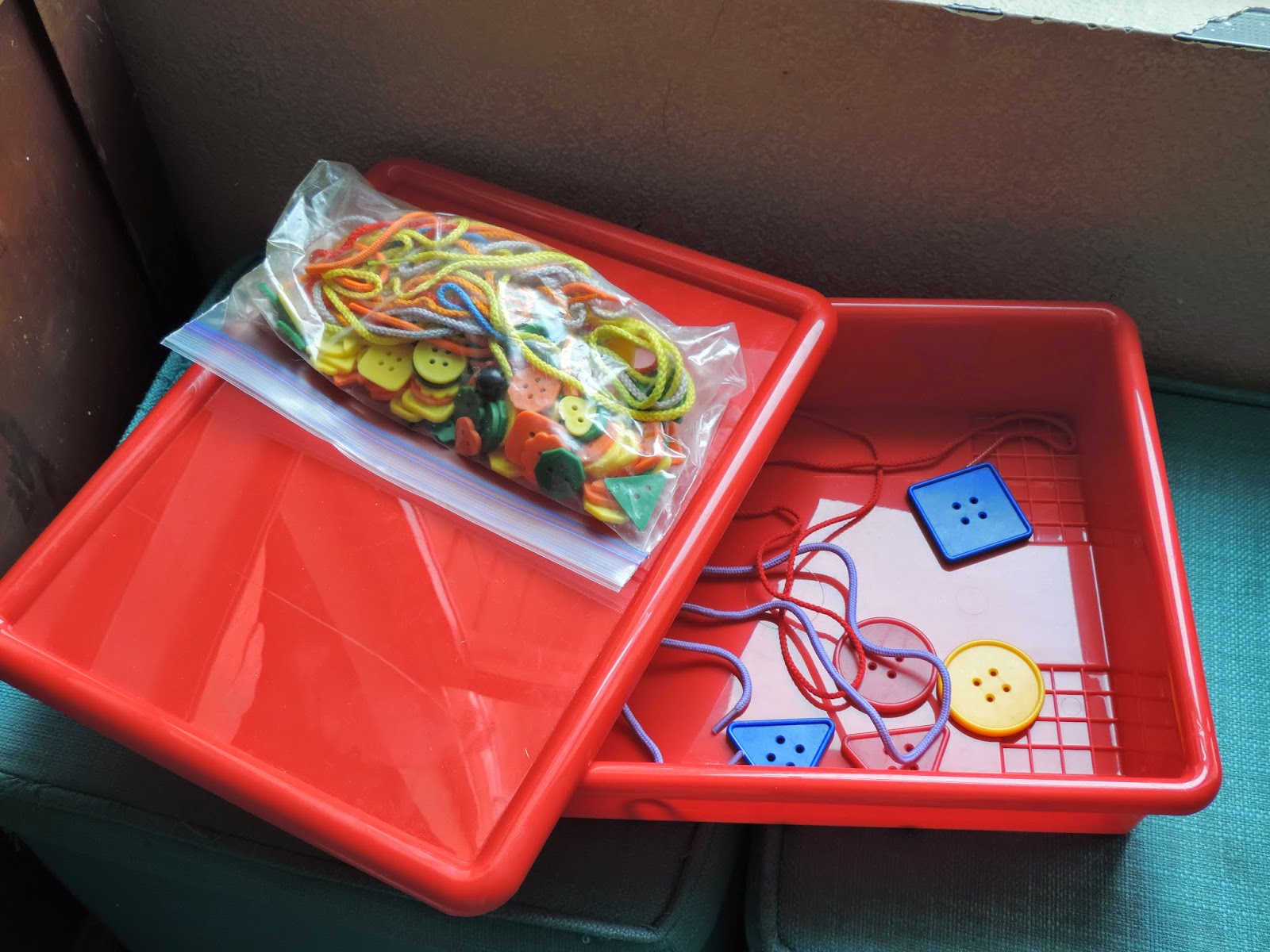 Next, I pulled out the buttons and lacing bag and added 2 laces and the very biggest buttons, to see how she would do with those.  I'm starting out simple, knowing I can add more, smaller buttons later, if she succeeds with the big ones.

We don't do a tray every single day.  I pull one out when Katie needs a change of pace.  If the girls are bickering, or she's getting hungry/tired a little before lunch, or after she's fallen and hurt herself.

Having a tray set up and ready to go means I don't have to spend a lot of time digging up something for her to do, I just open it.

It also eliminates the "Do you want to read a book?"  No!  "Do you want to do a puzzle?"  No!  "Do you want to play blocks?"  NO! phenomenon.  Sometimes toddlers, preschoolers, and even mommies, are cranky and contrary, and will say no to anything presented to them.  (Katie's not usually like this, but I've certainly had kids who were.)  Presenting the tray as a done deal instead of an option is working really well for us.

Tot Trays don't have to be expensive.  You can use things you already have around the house.  You can also re-purpose stuff that would ordinarily be thrown away.  I've been saving pouch lids from Luke's baby food to add to a tray, so watch for those in next month's Tot Trays post.