Our Third Week of School 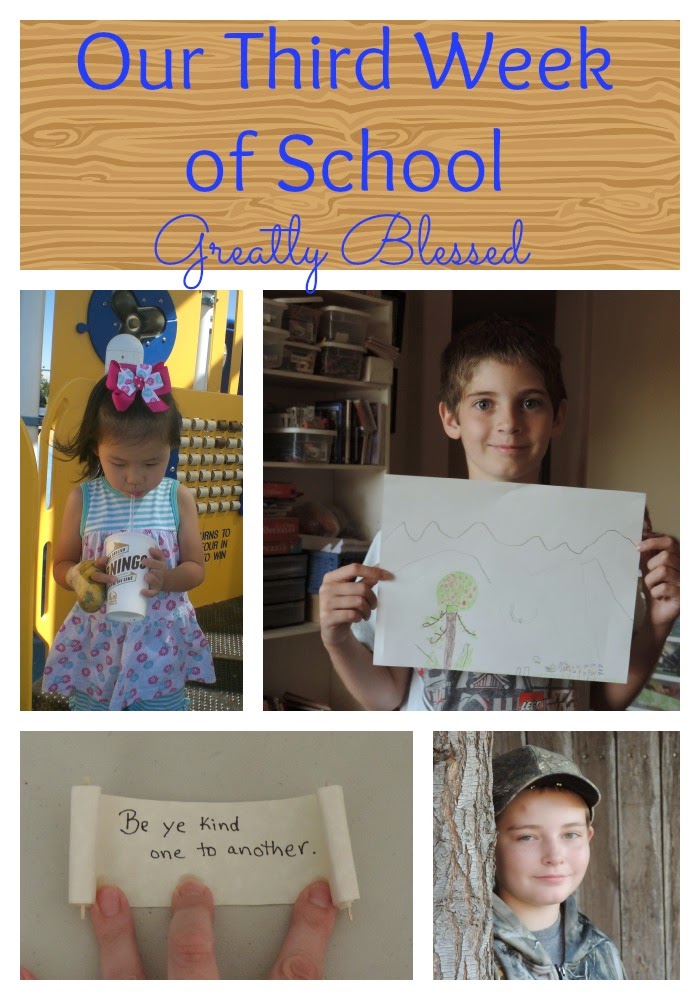 Last week, we lost days due to illness and surgery.  This week, we also lost time, due to homeschool co op starting (which, yeah, I get it, counts as school time, but it's not getting anything on the lesson plan accomplished), and a morning at the dentist.  But we're working hard on catching up.  We're finished with Week 2 now, and I'm hoping that by the end of next week we'll be fully on track again. 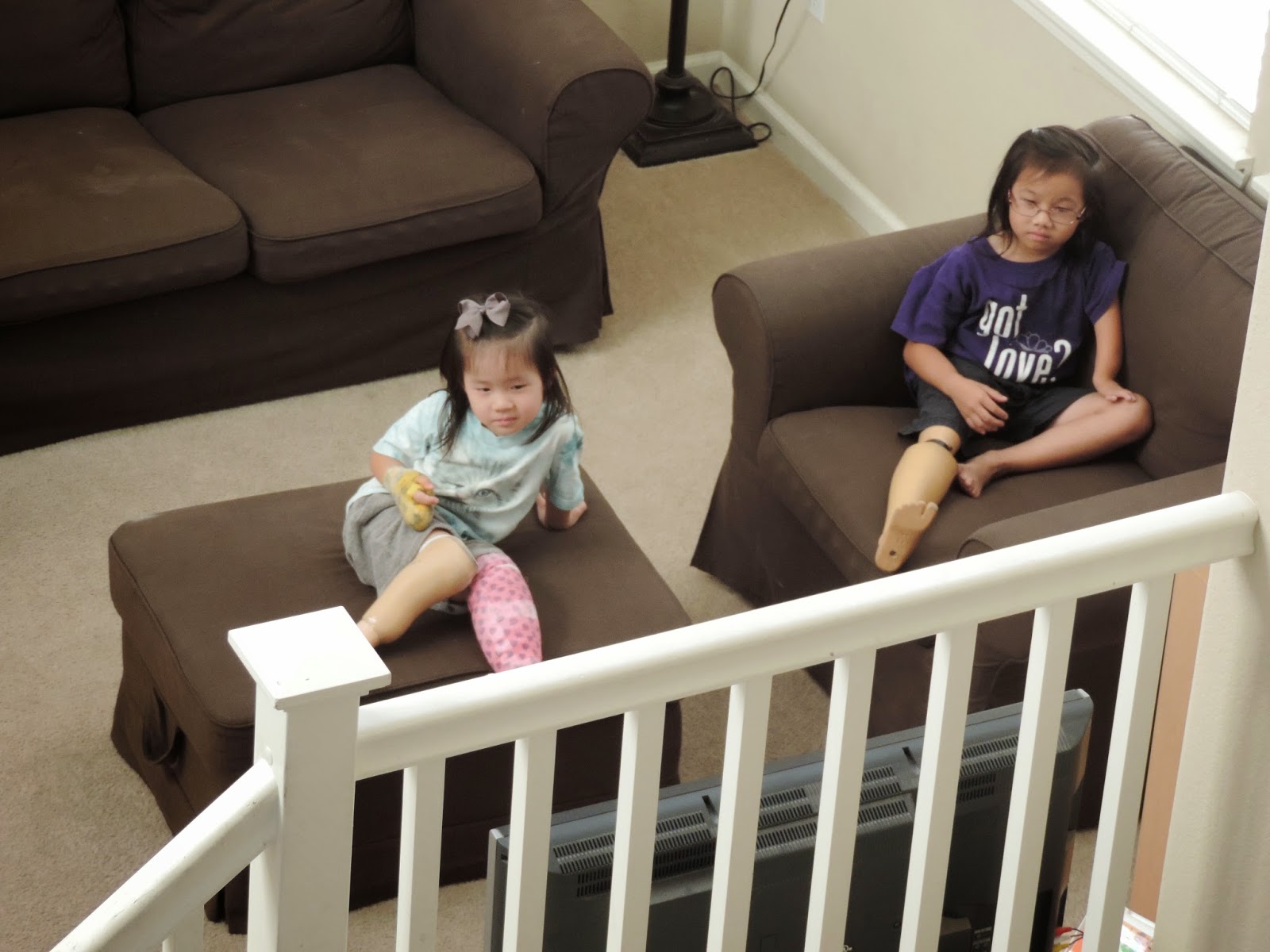 We watched more movies than usual the first couple days of the week, giving Katie a chance to rest.  She is up and running again now, doing great. 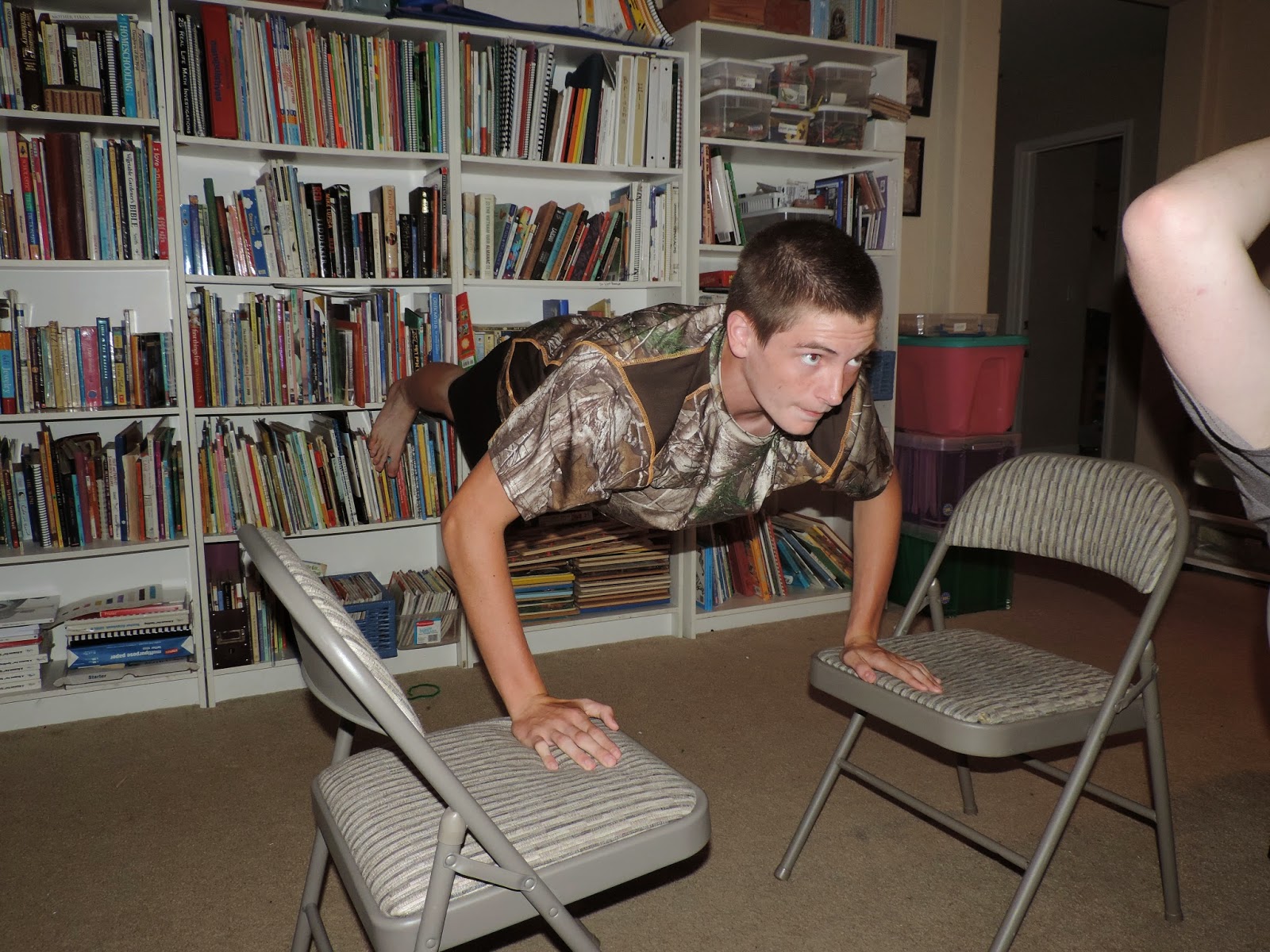 Samuel appears to be practicing his levitation skills. 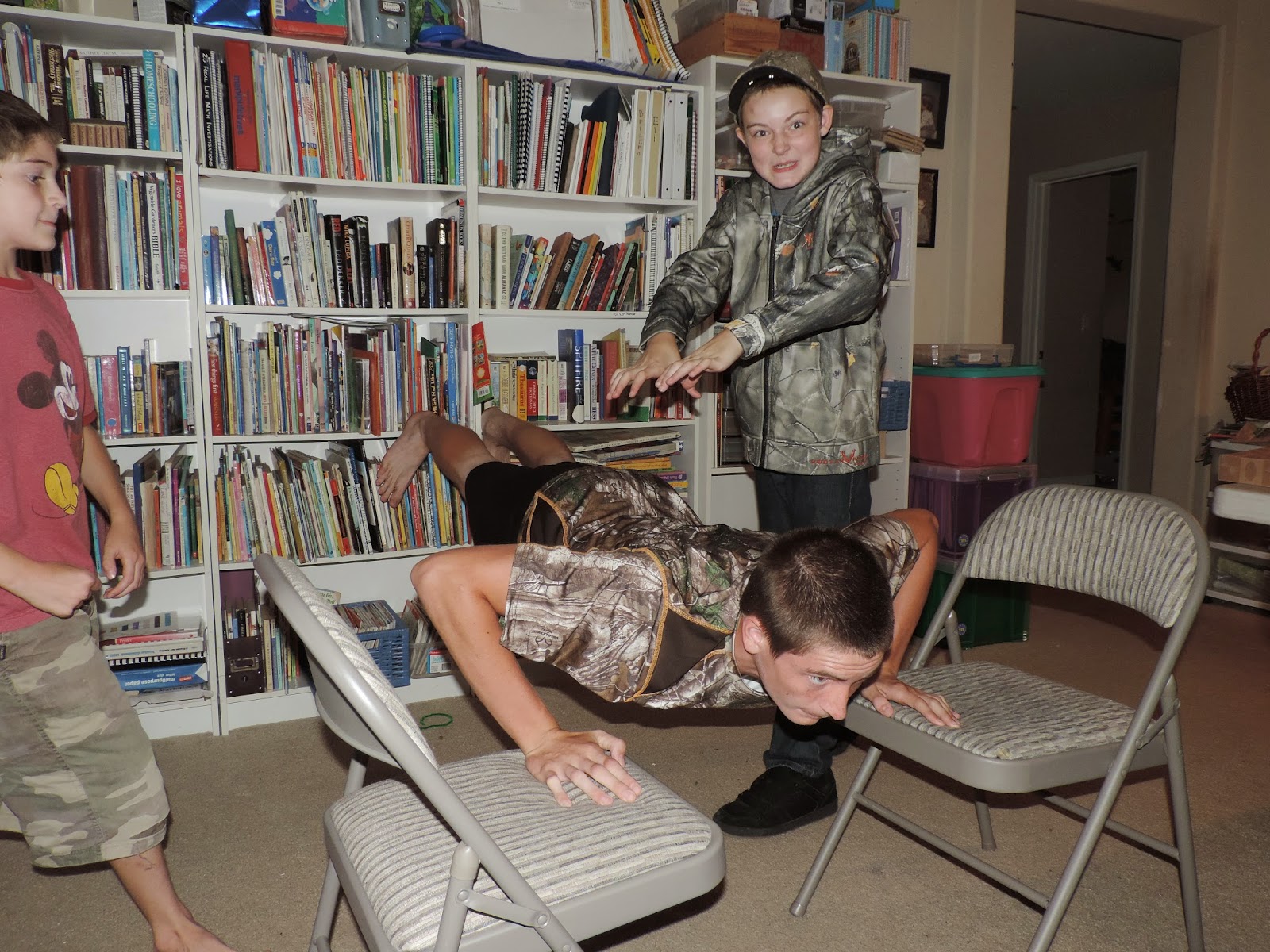 Or maybe that's Eli, using "force pull" to suspend him in the air. 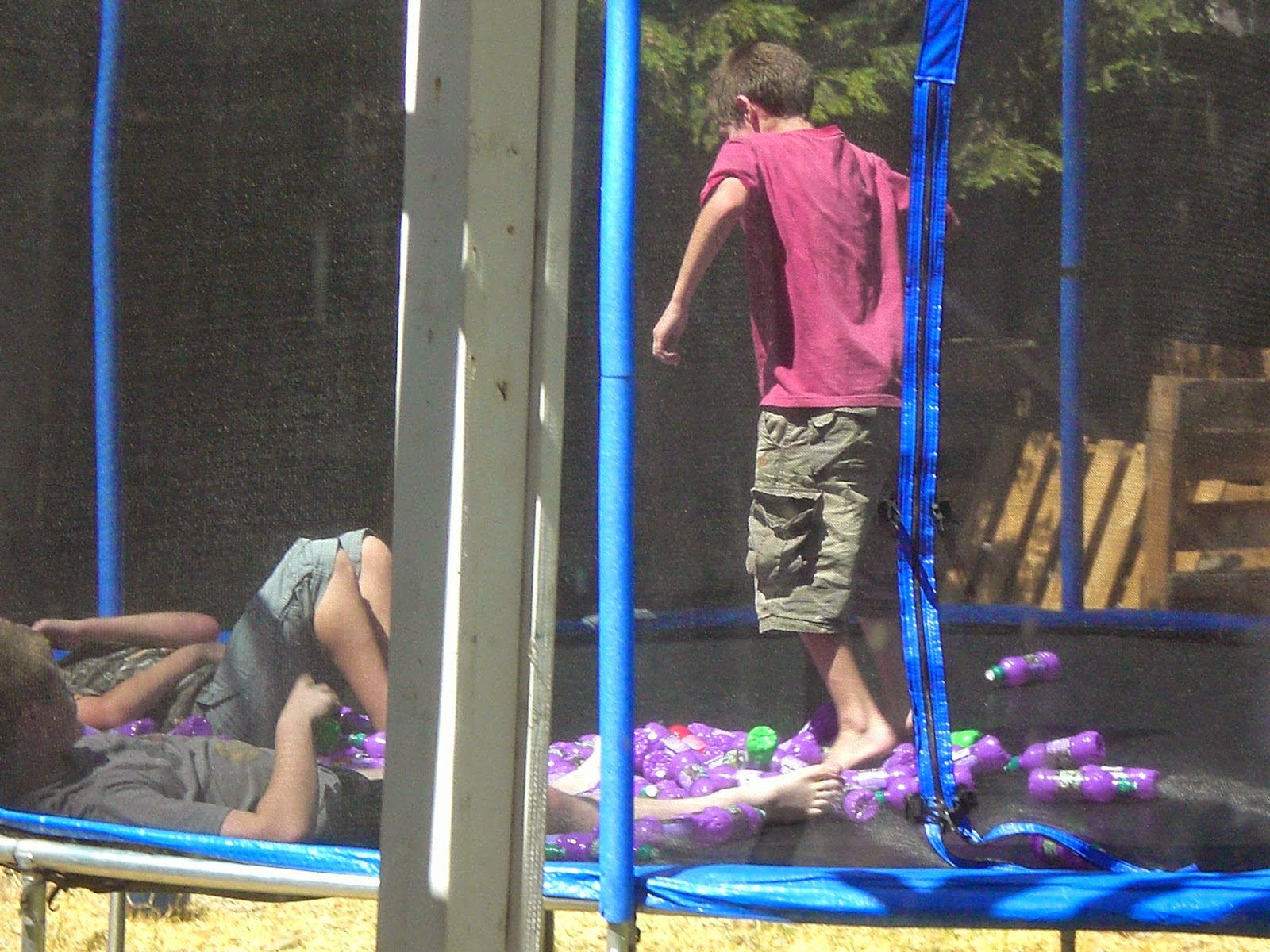 Not sure why they thought jumping with a bunch of hard plastic bottles was going to be fun...? 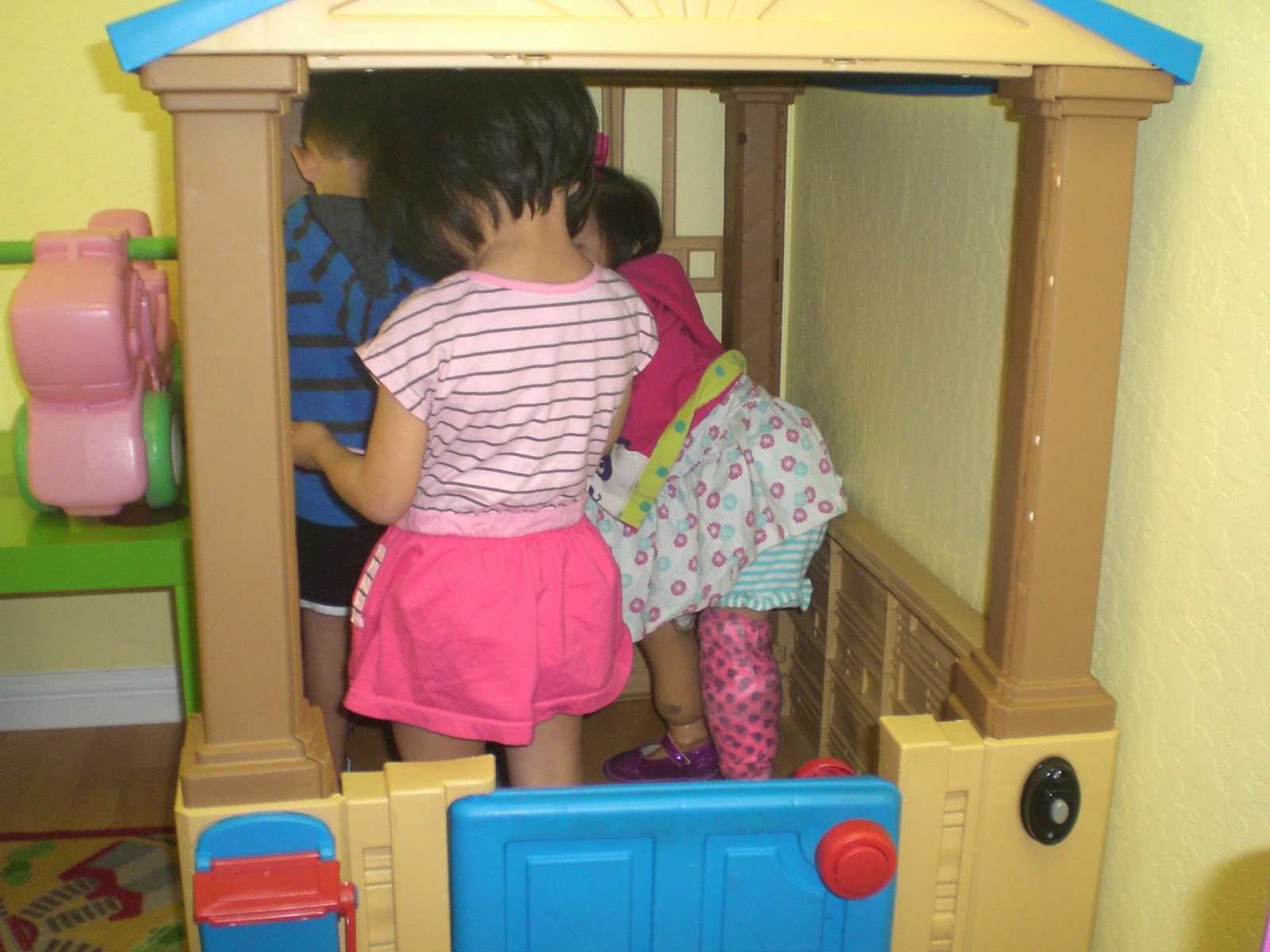 Katie (right) and a couple friends playing in the little house at homeschool co op.  Eli and Jack are in separate classes by age, but they're each taking art, science, and PE. 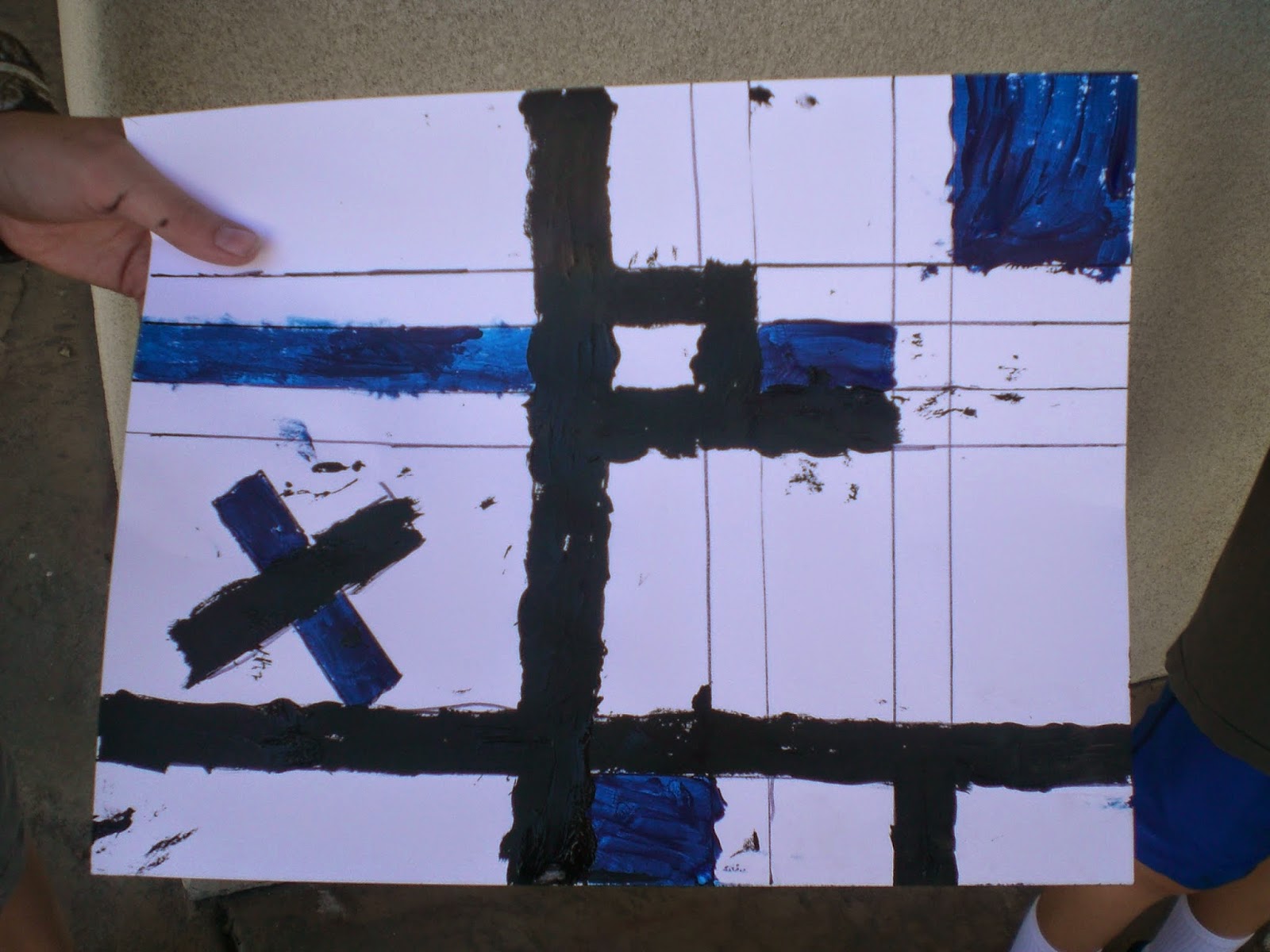 Eli's painting from co op.  Pretty sure this is not his best work. 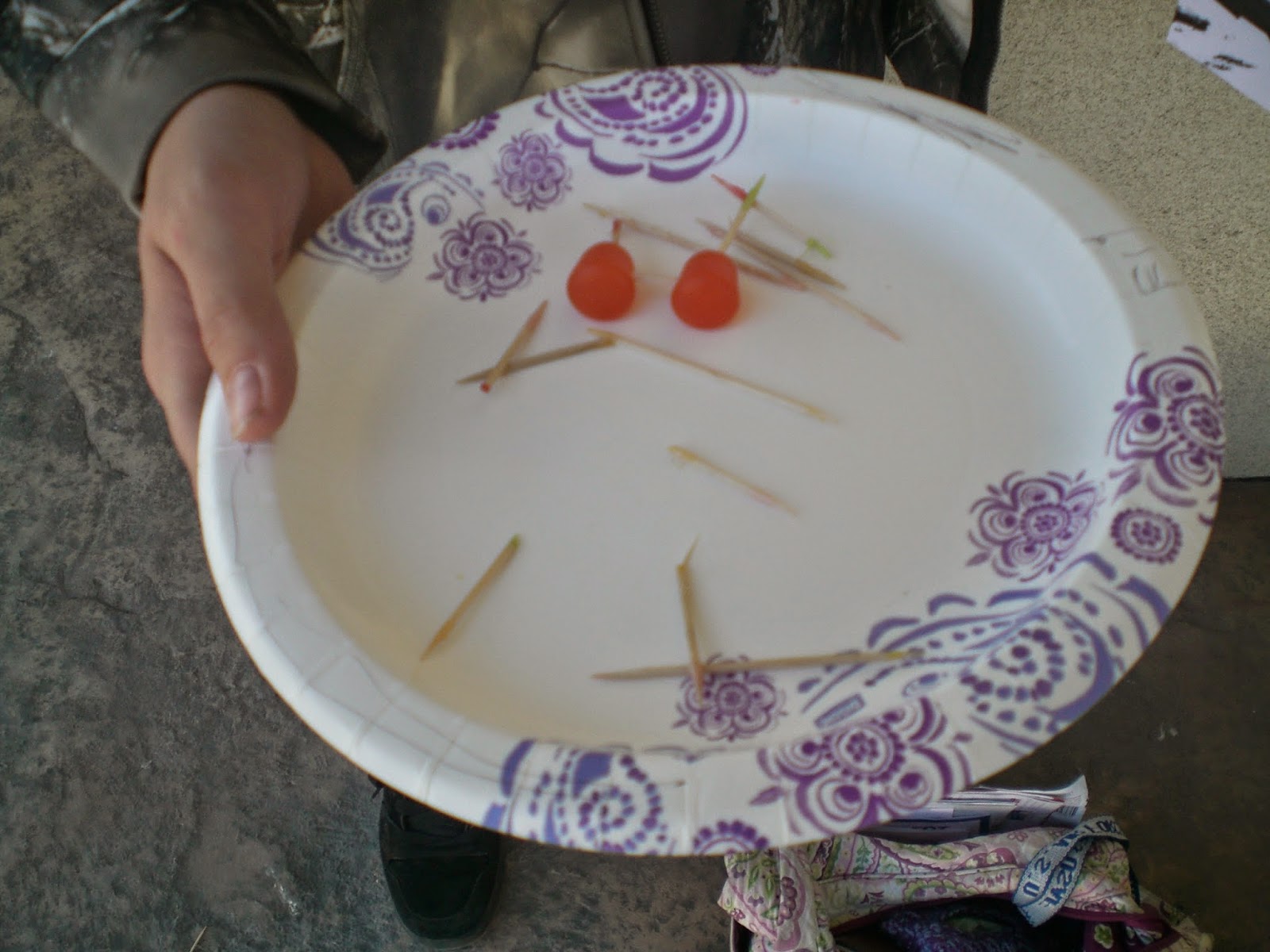 I wanted to take a picture of the molecule models they made in science, but by the time I got to him, this was what I got.  Tasty molecules, it would appear. 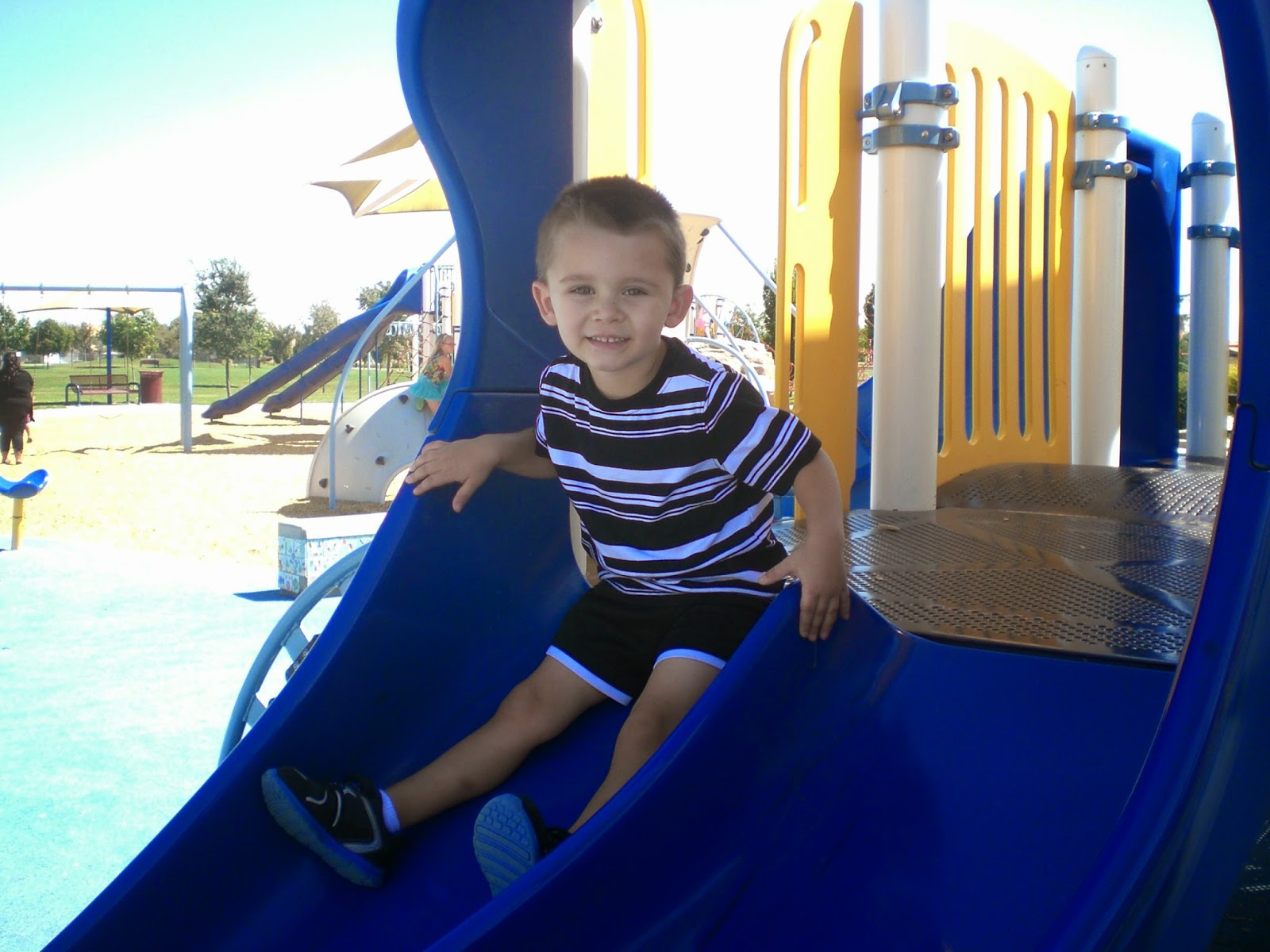 We got to spend some time with Brayden this week.  Katie and Hannah's dresses for the wedding arrived, but they run really big, so I had to order a tinier one for Katie and Hannah will wear the dress originally intended for Katie.  I just ordered Eli & Jack's wedding wear.  I know December is going to sneak up on me if I put it off, so I'm trying to outfit the family a little bit at a time. 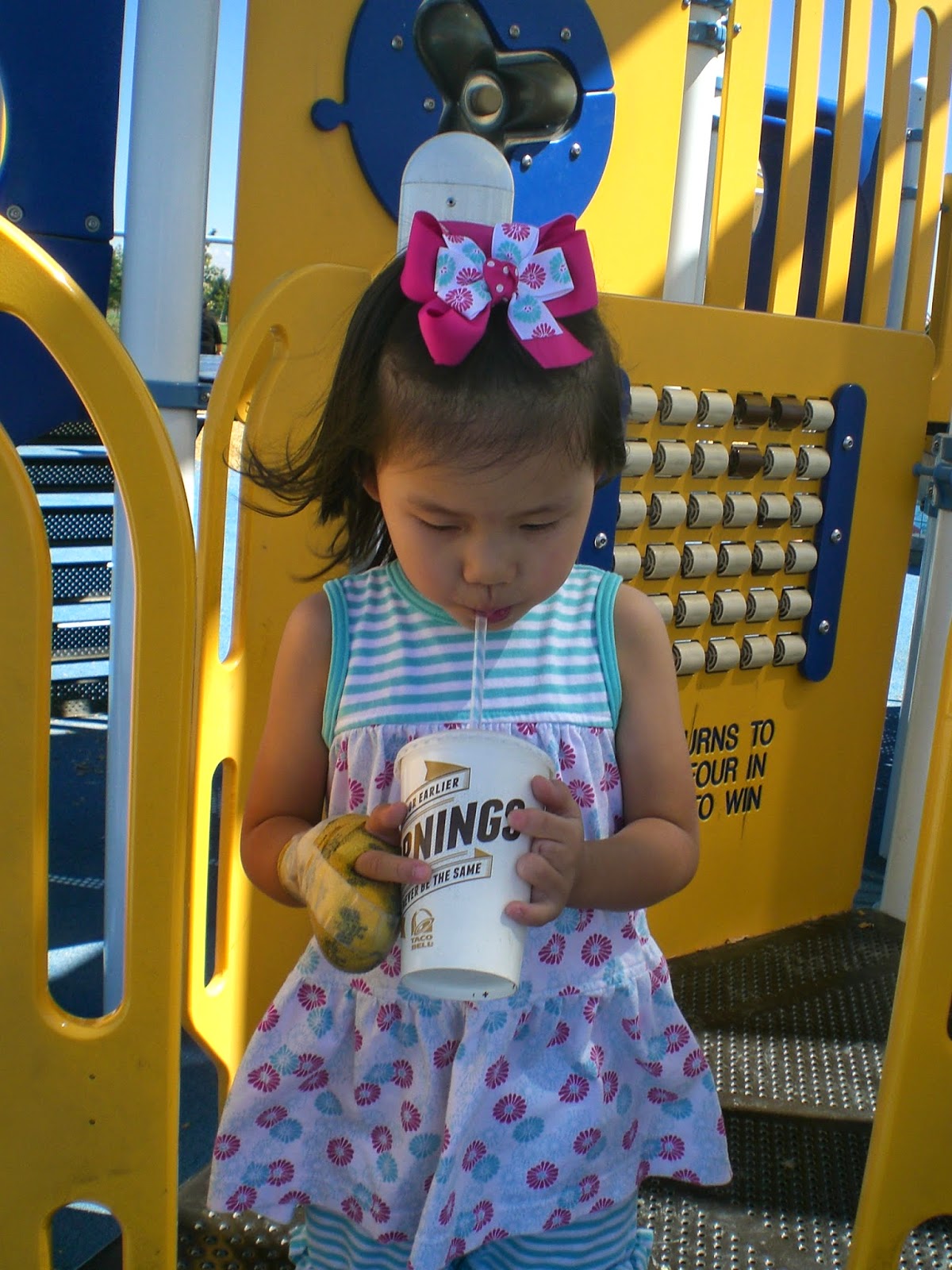 Little Miss Katie is doing well, despite her "mitten" bandages.  I've become convinced that they will NOT be lasting 4 weeks, and the lovely folks at Shriners will just have to chill when I bring her back in with different wraps.  The pink one is already filthy, and I'm sorry, just thinking about her using the bathroom and not being able to wash is grossing me out. 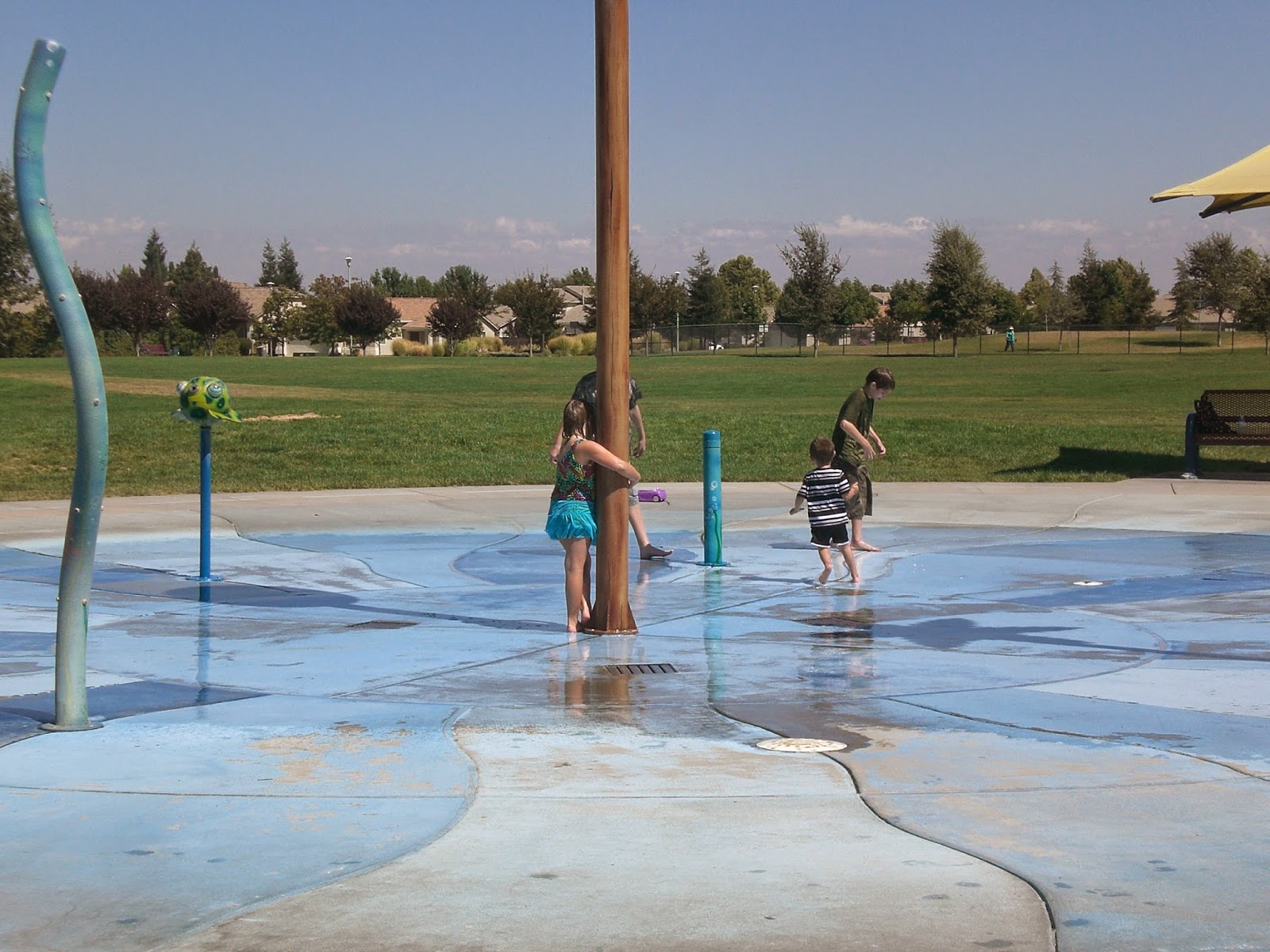 It's still warm enough for water parks, but feeling much more autumn like.  Not the weather, but more the time of year, I guess.  Seeing Halloween stuff in the stores, getting ready to go to Apple Hill, things that say it's autumn, even if it's 100* out. 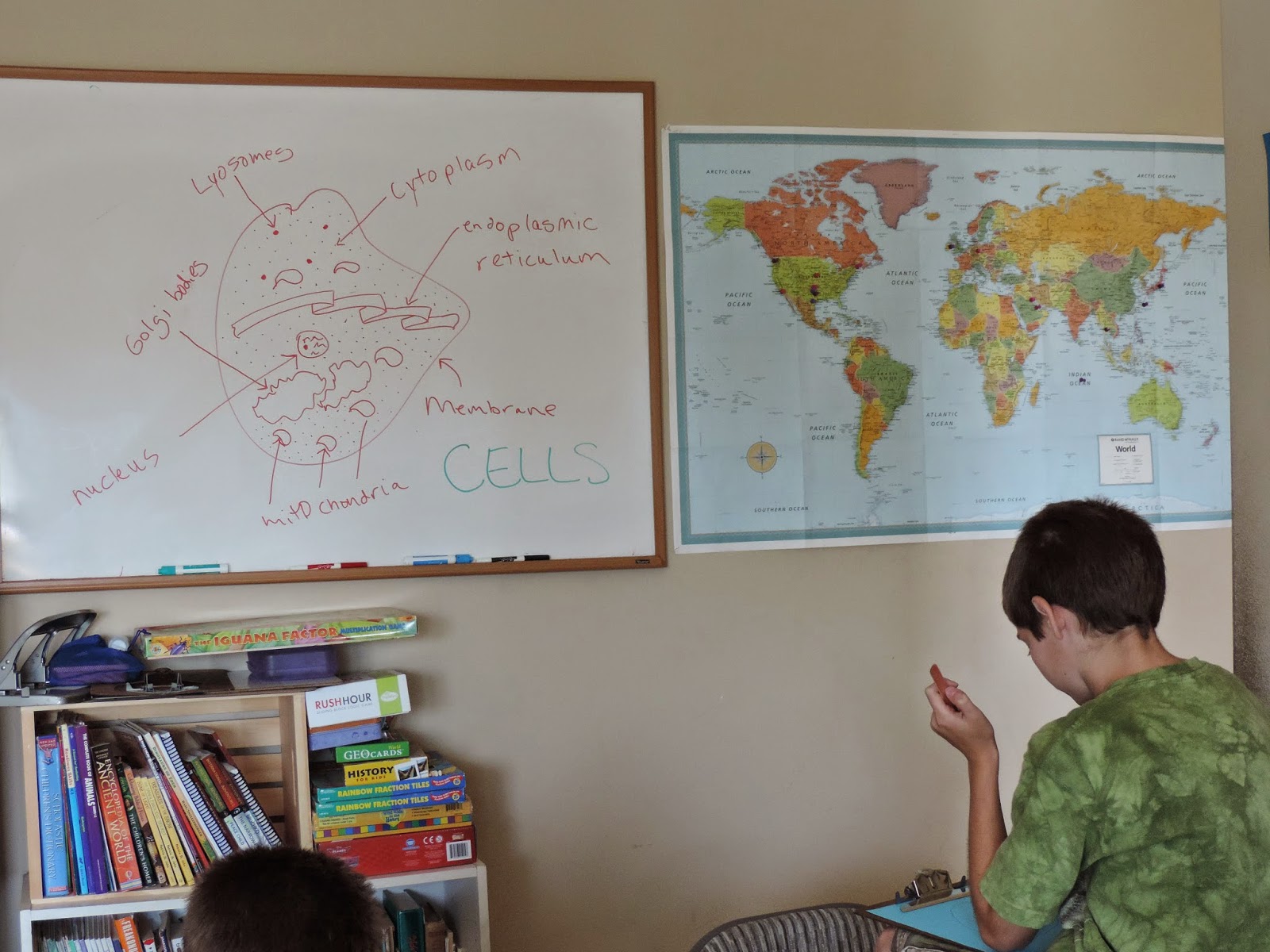 This week, we learned about cells.  Jack is copying my cell drawing and labels for science. 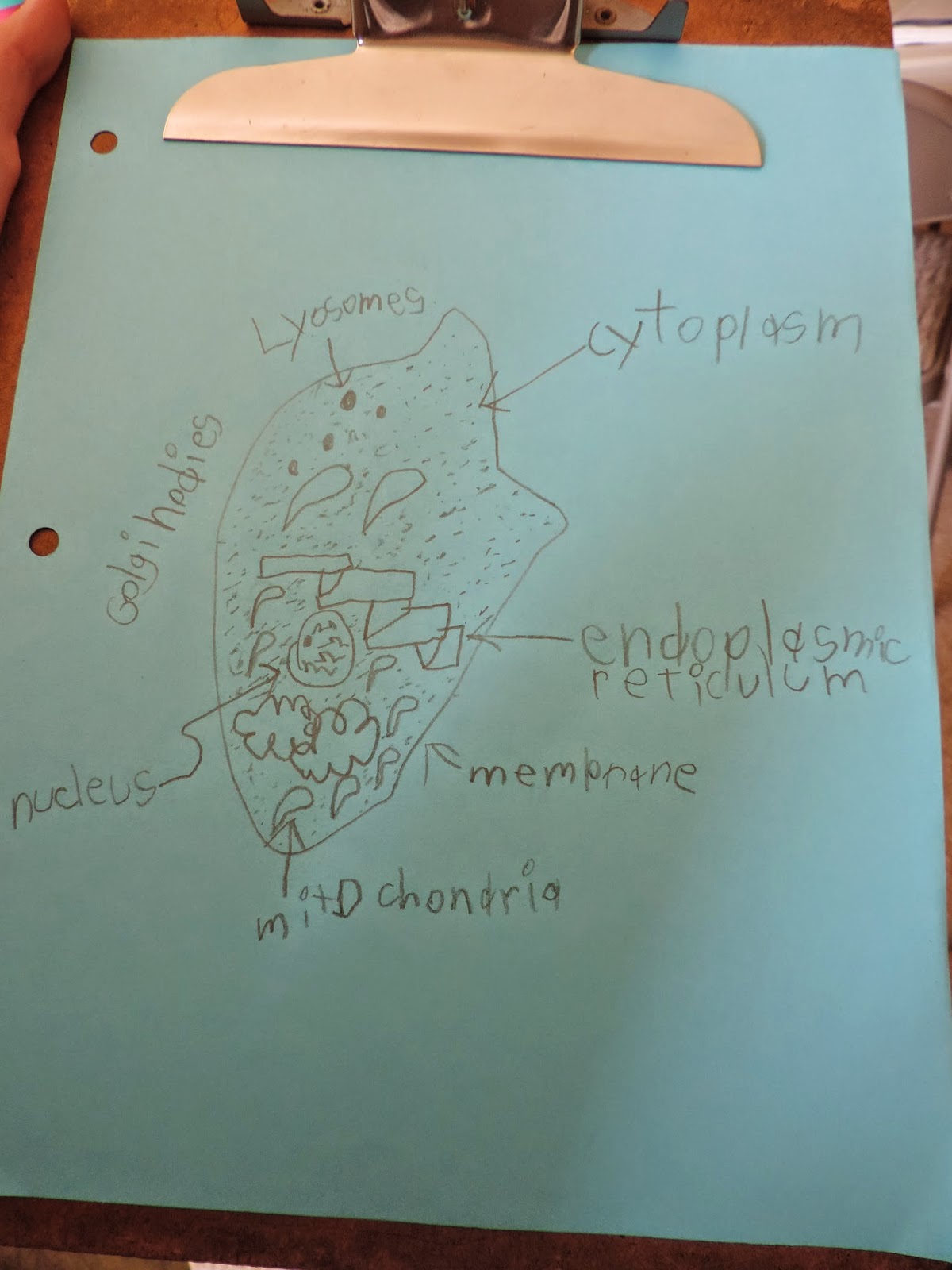 He did a good job!  I like his ribbon-like endoplasmic reticulum.  Learning cell parts was interesting for me, because when Luke's neurologist says he might have a mitochondrial condition, it suddenly makes more sense to me.  And why genetic testing--from within the nucleus of the cell--is so expensive.  Those are some seriously tiny pieces we're talking about. 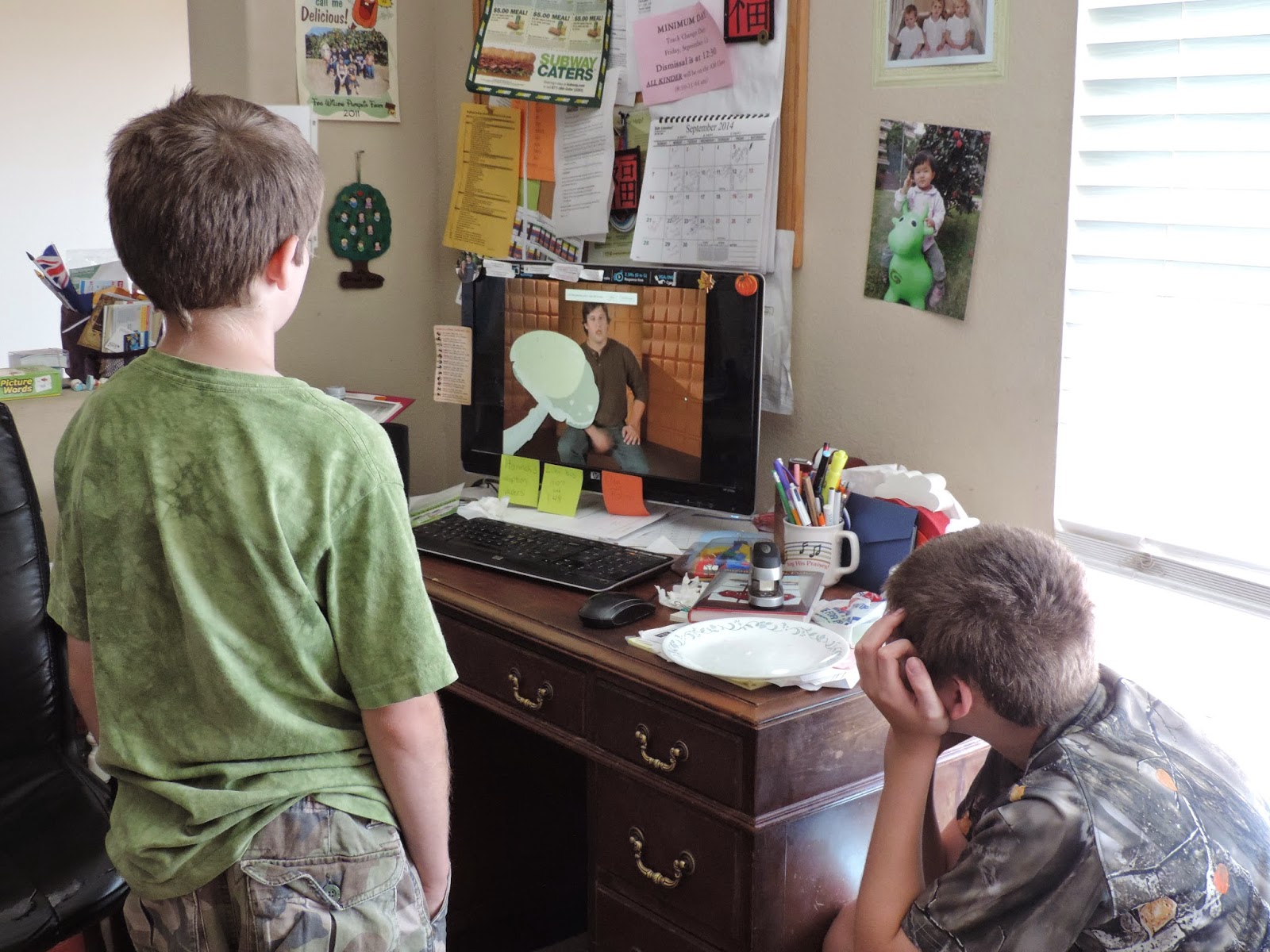 We also watched a video about cells from a new review program we're checking out. 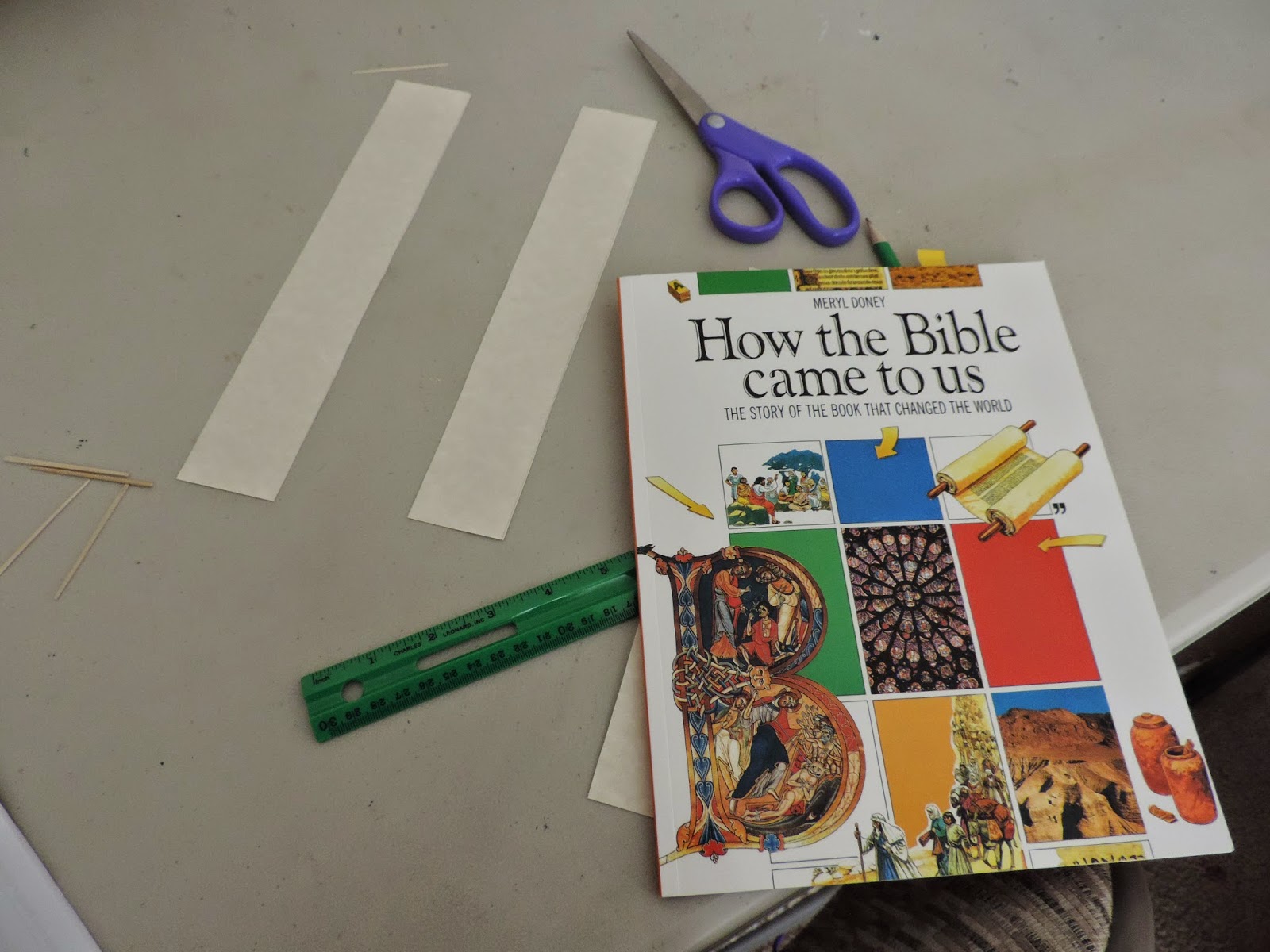 Our craft this week was scrolls, from the book How the Bible Came to Us

(affiliate link).  I'm liking this book so far, even though we're only a few pages in. 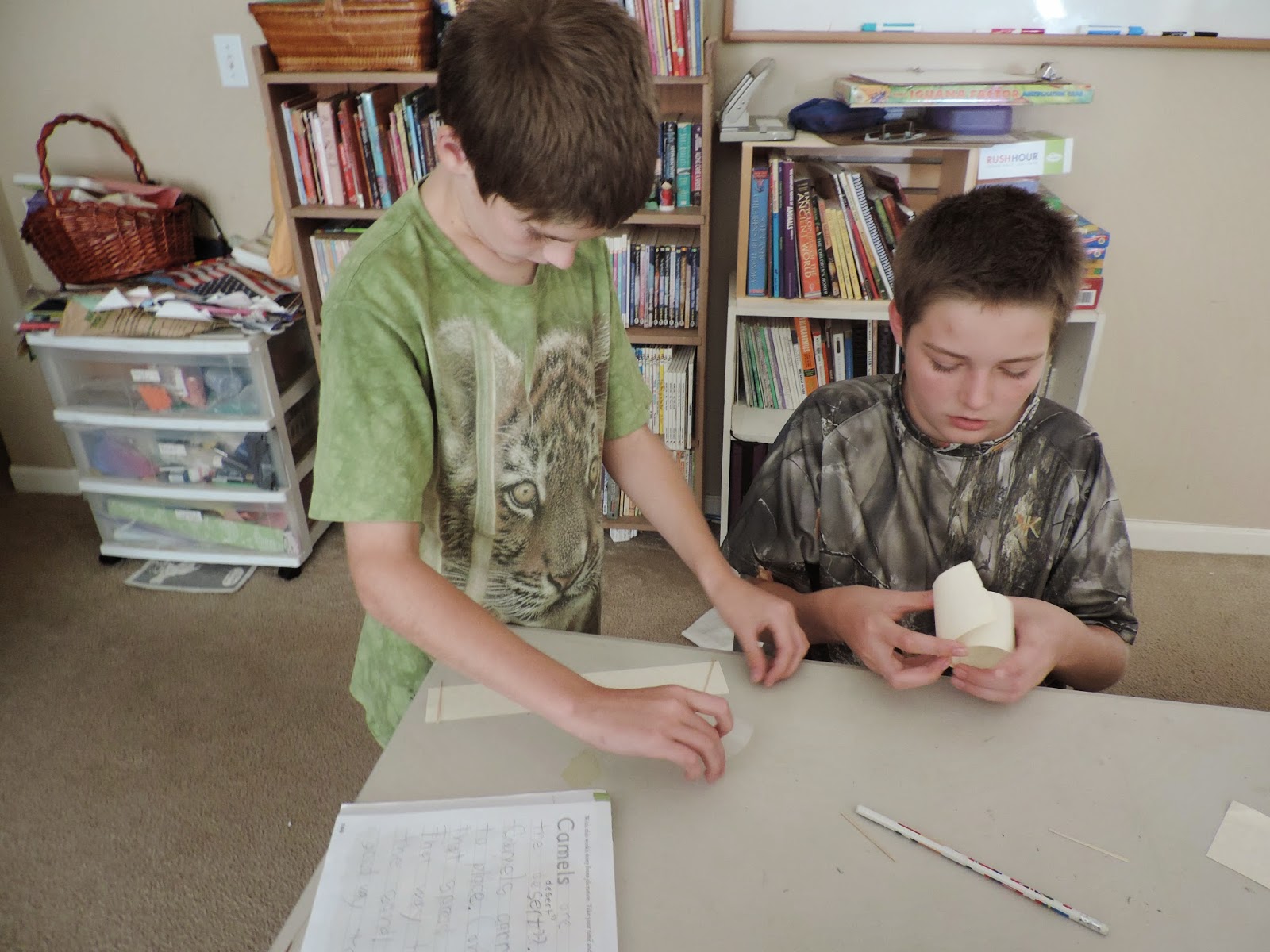 We cut strips of parchment, taped toothpicks on the end, and rolled our scrolls up. 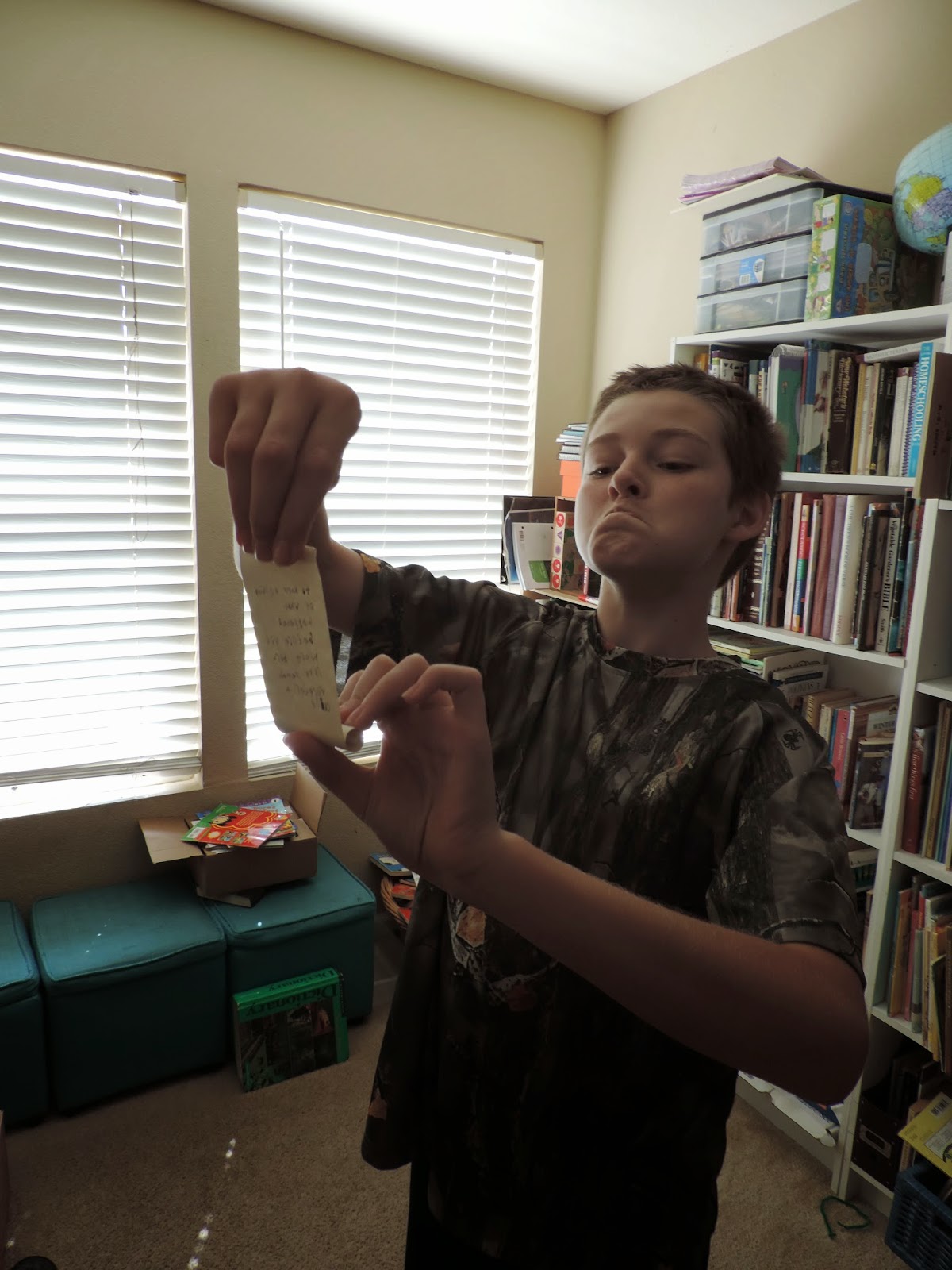 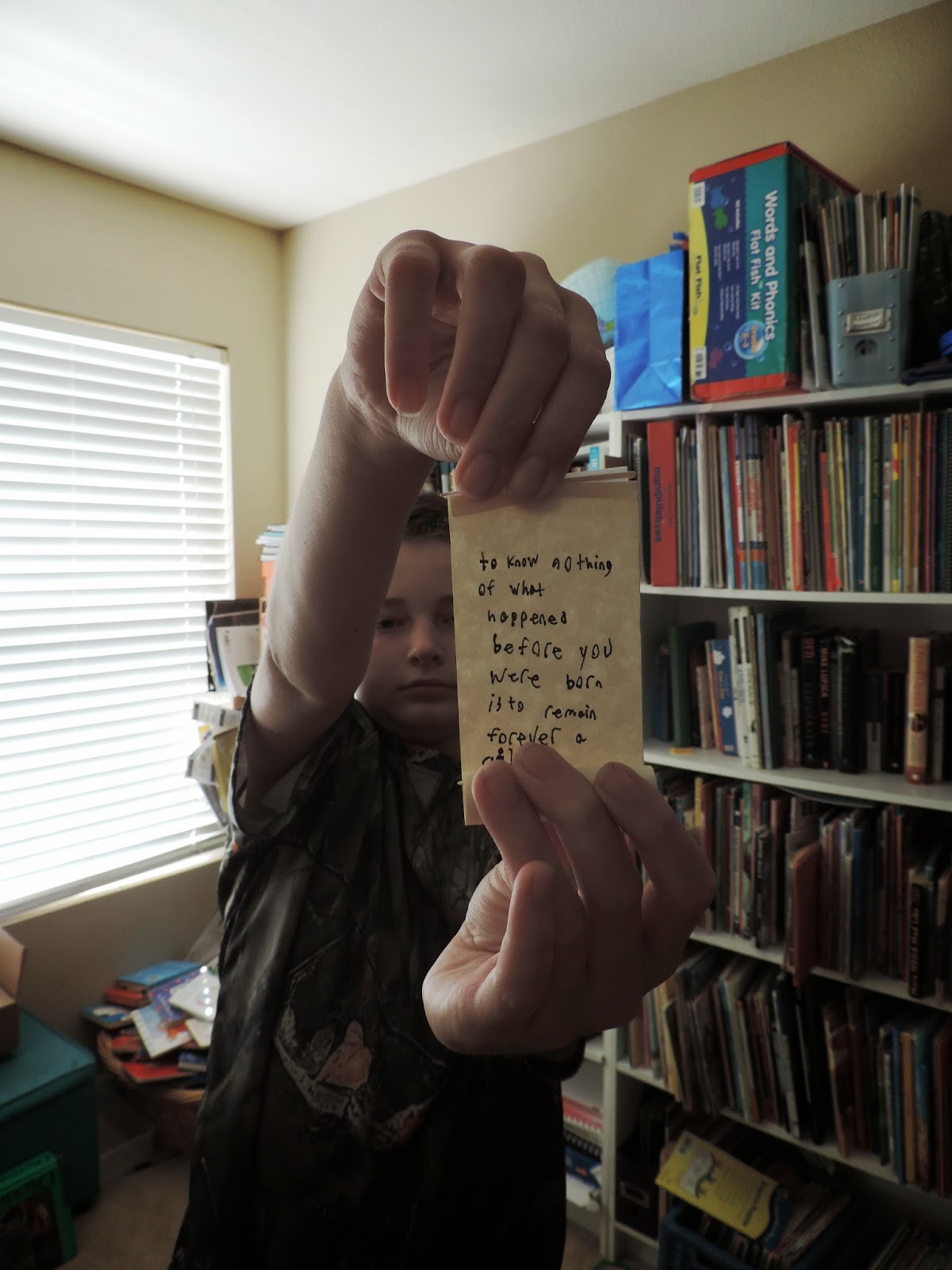 "To know nothing of what happened before you were born is to remain forever a child."  Eli's scroll features a quote from Cicero.  We read about his death this week, as we studied the time period between the death of Julius Caesar and Octavius' rise to power. 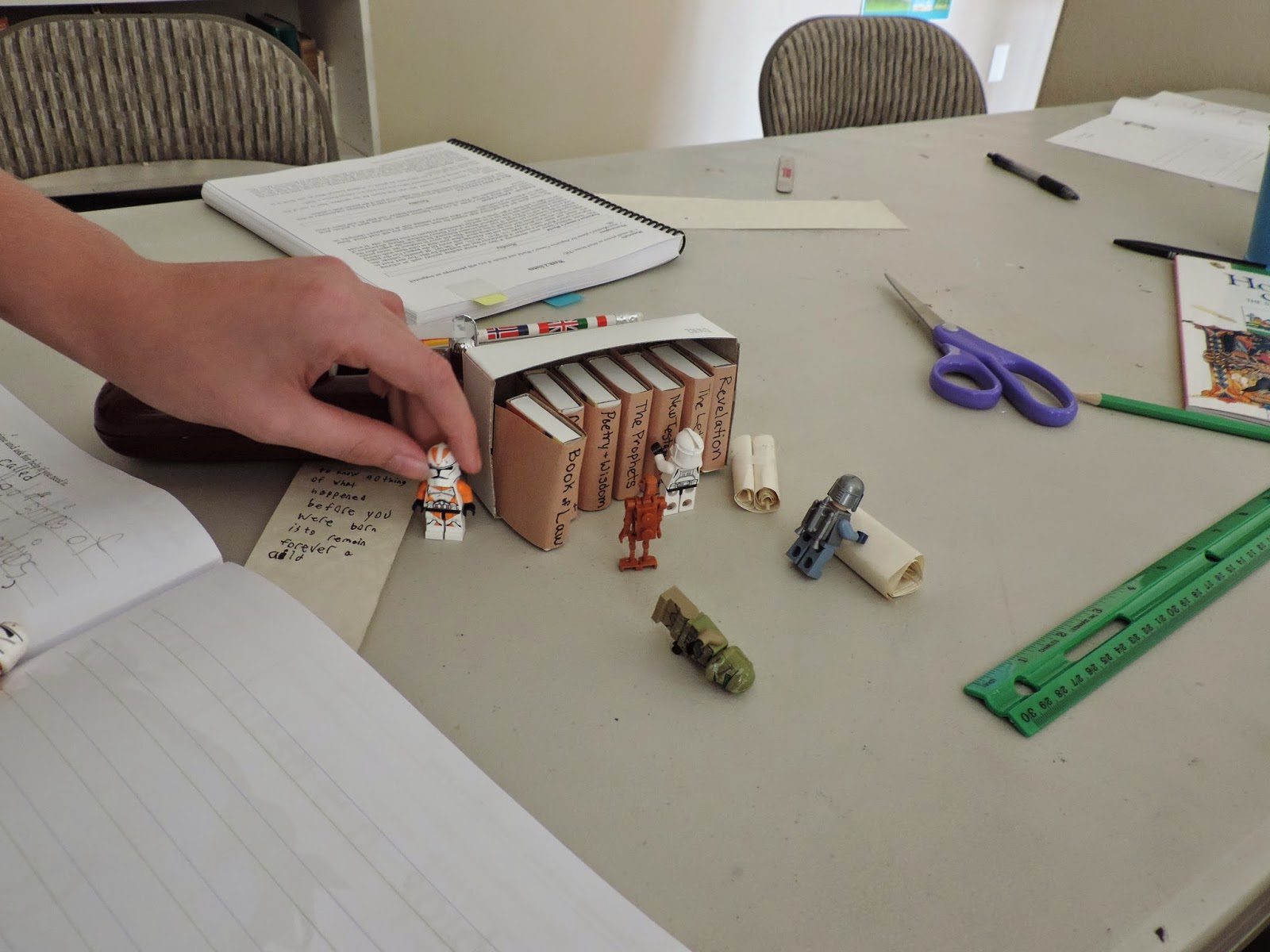 When I told the boys to put the scrolls with our Bible craft from week 1, Eli said, "It's like the library at Alexandria [Egypt]!"  Ancient books and scrolls.  I was pleased with the comparison.  They brought out some Lego guys to enjoy some light reading. 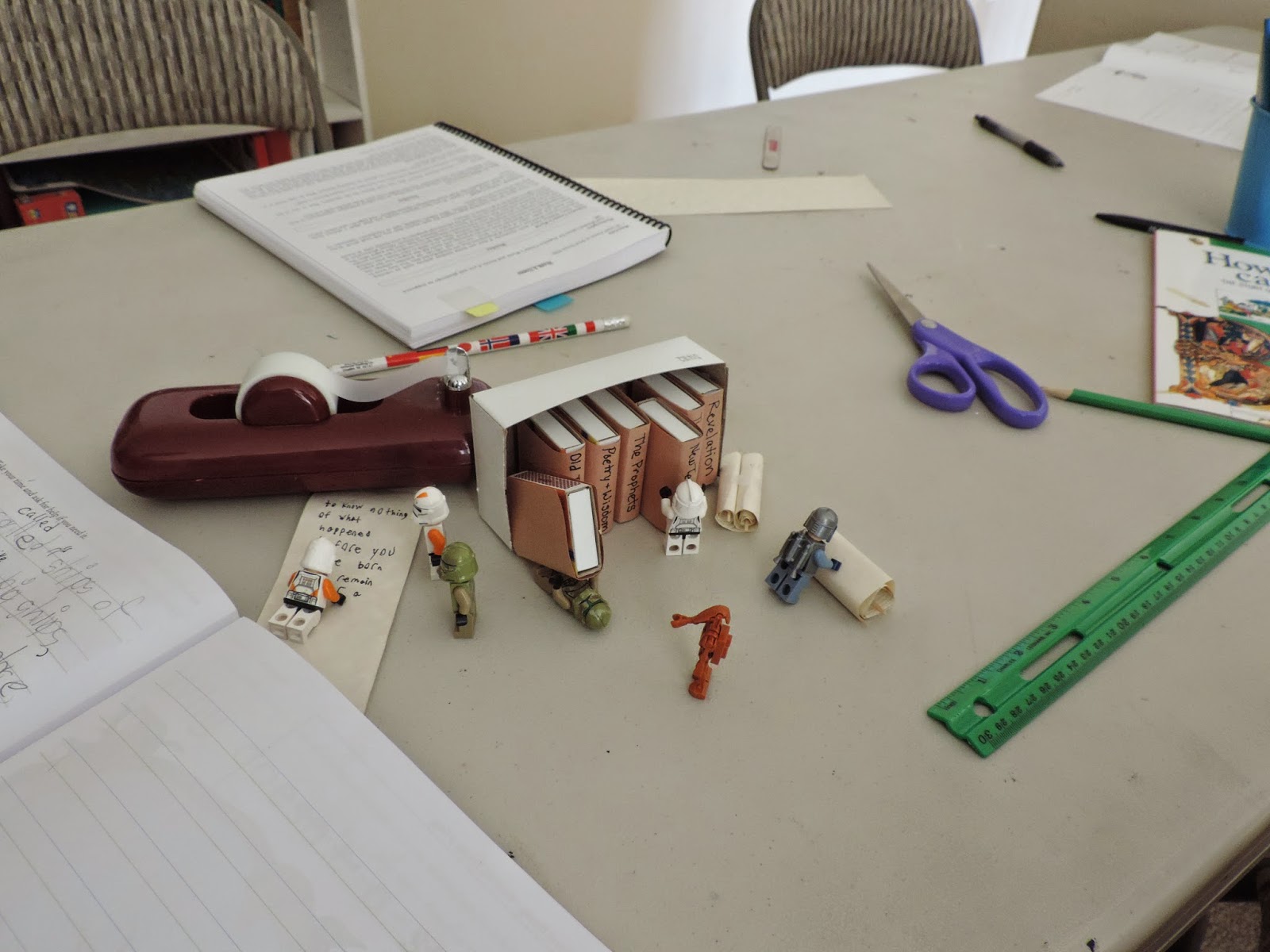 I'm having a lot of fun with my boys this year. 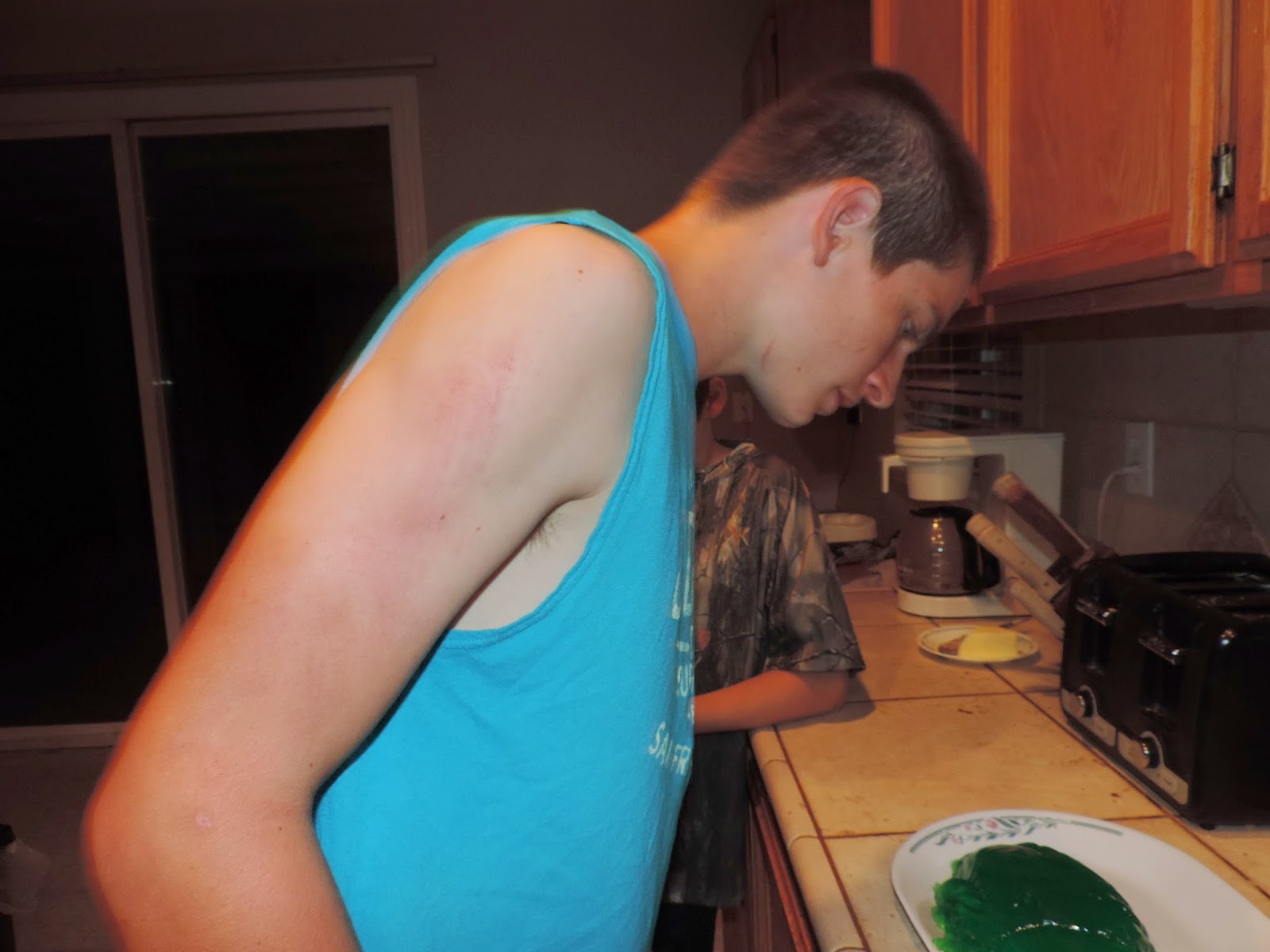 Sam came home, battered from football, to discover a brain in the kitchen. 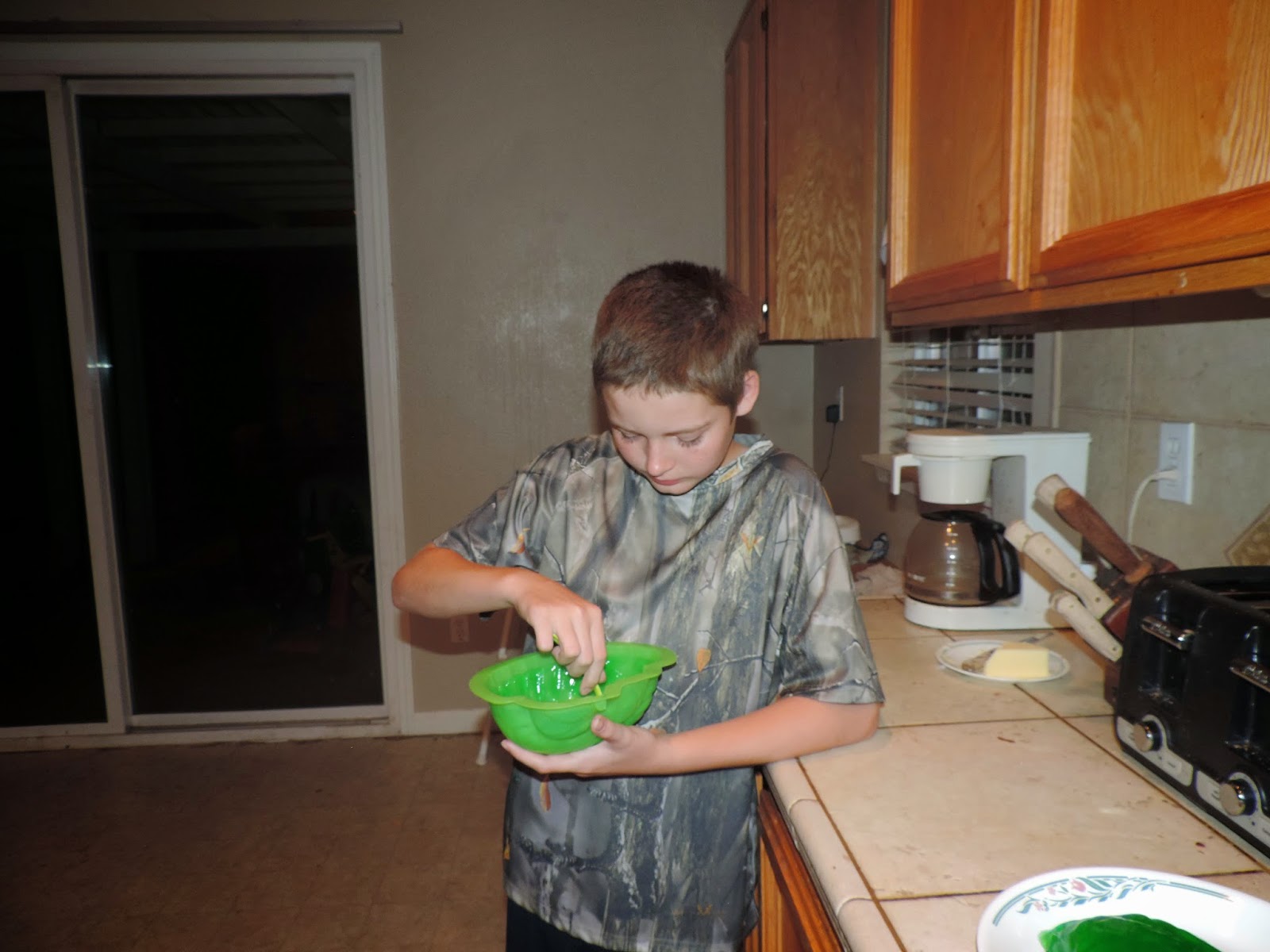 We've been using up a bunch of Jello to save the boxes for an upcoming project.  Eli is my Jello cook.  And if seeing somebody eating out of a brain mold isn't creepy enough... 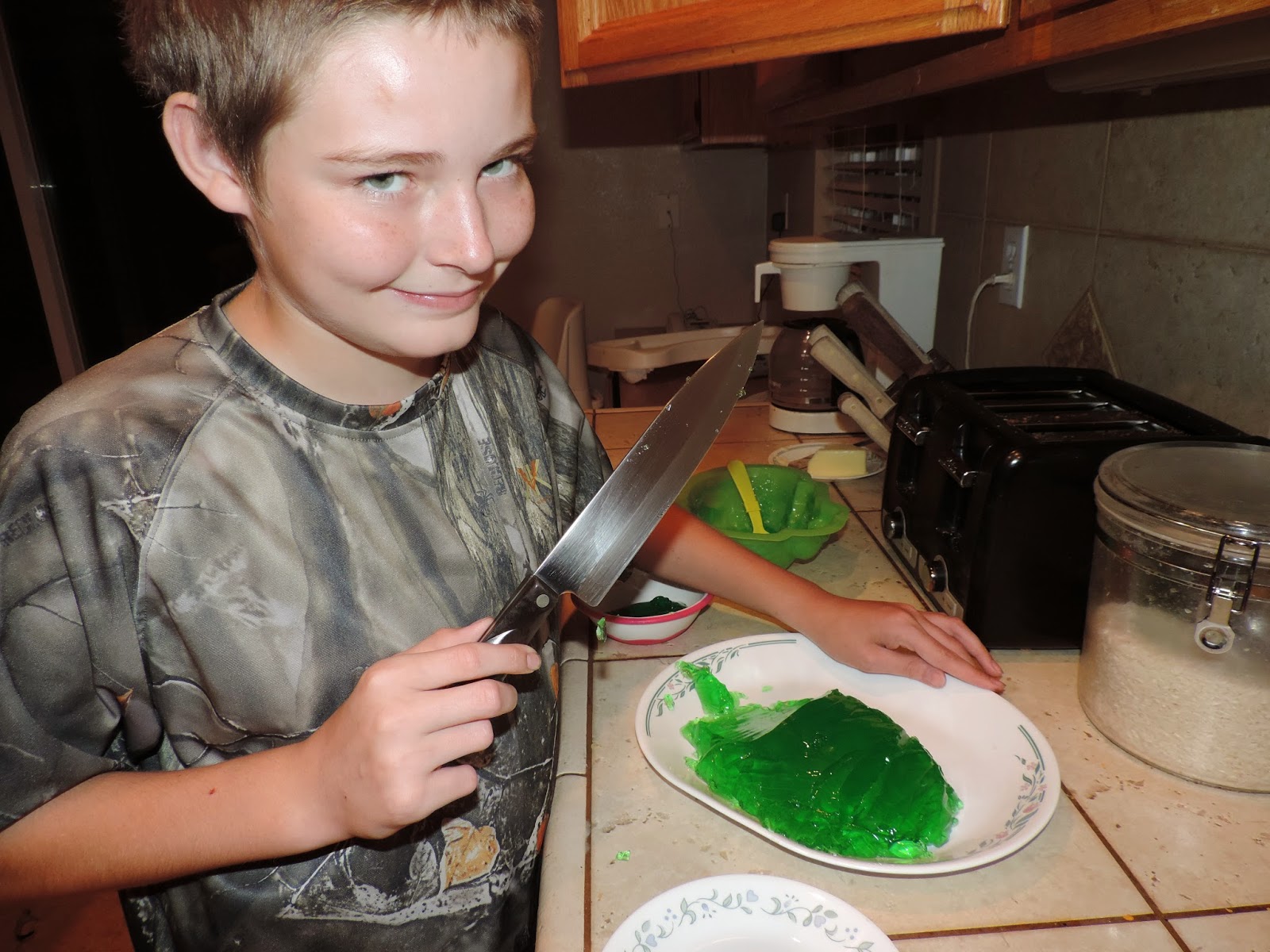 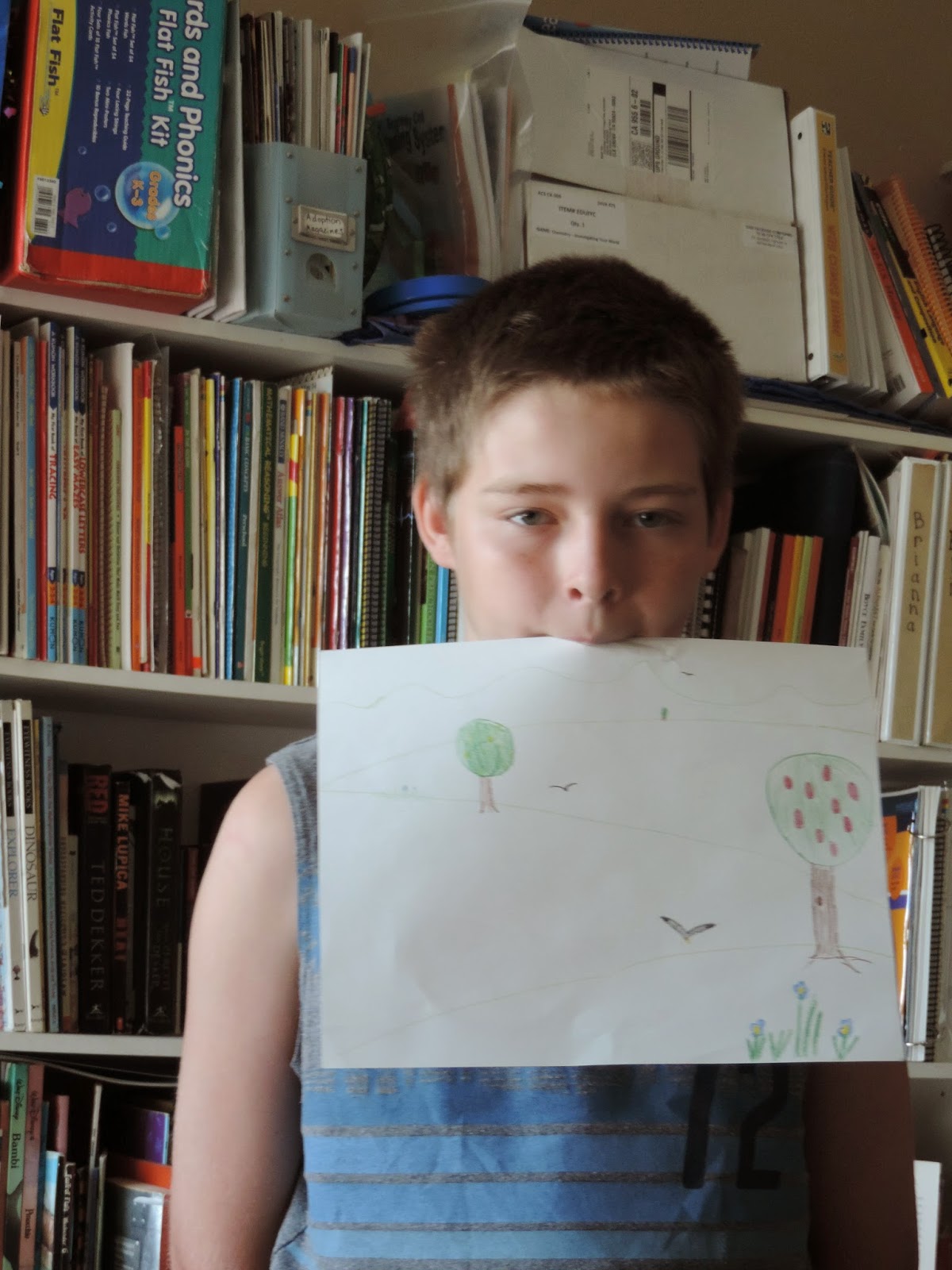 We had 2 lessons in art at home this week (in addition to art at co op).  We learned about foreground, background, and perspective. 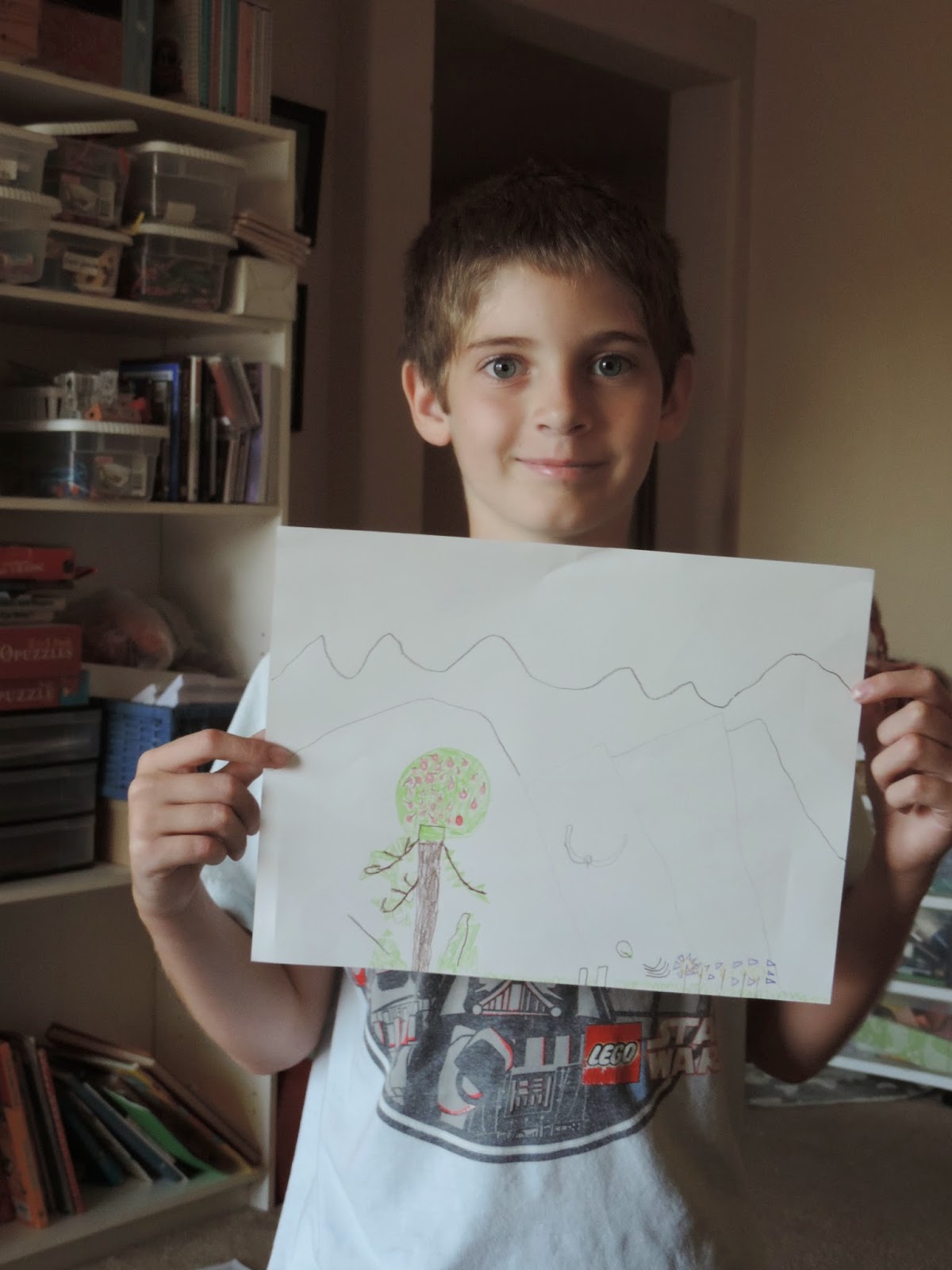 I just found out we were selected for a review involving a treasure hunt, and I ordered something very cool to be the treasure.  It will involve art, but I'm pretty sure the boys will like it more than the directed drawing exercises we've been doing lately.

Luke's class had picture day this week.  Not sure when those come back, but I'll be sure to share them.  He had appointments at The MIND Institute and Shriners, and there's nothing especially new to report.  It seems that some of the tests we thought had been ordered were not put into the computer correctly, so the results we were really hoping to find out haven't even been run.  As an aside, I'd like to know what they did with all that blood they took, if they didn't run the tests, but whatever.  Right now, we're waiting for a follow up call from The MIND Institute to let us know to go have blood drawn again.  He's got 5 upcoming appointments scheduled, so maybe we'll be able to hit the lab when we're already at one of the medical buildings.

While you're here, don't forget to enter our Dolphin Tale 2 prize pack giveaway!