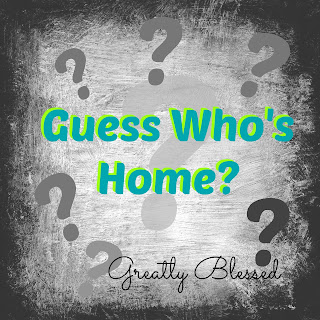 I know it seemed mean to leave you guys all hanging last week, but I was concerned the plan might change at the last minute.

Last Thursday, after returning home from taking our Little Guests to visit their mama, I sat down to read emails, and was stunned by one of them.  It was from A, the attorney handling Luke's adoption.  His new adoptive family did not want to finish the adoption.  Since their state requires 6 months for finalization, the process would not have been complete until October.  This meant that, although they had custody of him, as part of the paperwork that we signed, we're still his legal parents until that time. 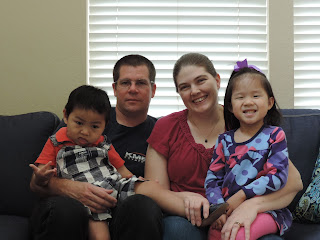 What I thought would be the final picture of the 4 of us together - April, 2015

Honestly, I was completely floored.  I so didn't see this coming.  His other mama had been sending us pictures from time to time, and hadn't indicated that there were any problems.

I emailed her to find out what the heck happened.  Ironically, the very thing that made me confident that their family would be perfect for Luke, ended up being what caused things to unravel.  I was sure that they could handle him, because they already have several kids with similar special needs, and are doing a great job with them.  Unfortunately, Luke's frequent and inconsolable screaming was causing problems for their kids with sensory issues. 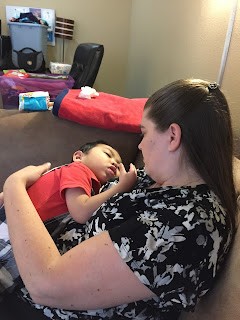 Saying goodbye at their hotel, April 2015

I get it.  None of us here have sensory issues, and Luke's screaming made a huge impact on us.  I wanted to disrupt for the sake of my other children and our family as a whole--and so did she.  I totally understand.  That's not to say I'm not shocked and disappointed, because I am.  But I understand.  It's somewhat validating to have this Super Mom, with a team of therapists that come to her house, and with a great support system, say that she can't do this either.  I feel a little less like a horrible person. 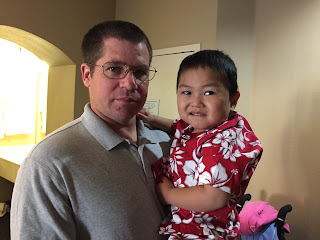 As we've shared this news, people have asked, "What next??"  The short answer is, I have no idea.  We're going to take this one day (possibly one hour) at a time for right now and wait until things settle down a bit before we figure that out.  We're brainstorming every possible solution at this point. 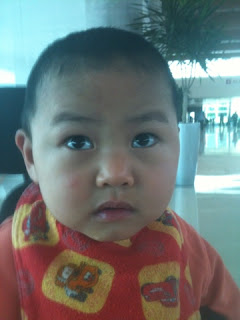 Paul sent me this from the airport today.

I know there were people who disapproved of our decision to disrupt, but I believed, and still believe, that it was the right choice for our family.  Having a 4 month break from Luke allowed me to climb out of the pit I'd slid into, and helped our family get back to a healthier place. 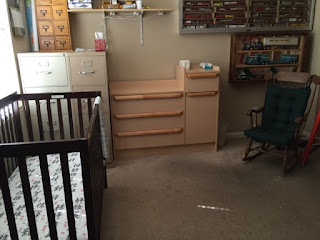 We truly believed this new family would be Luke's forever home, and in our mourning, we got rid of the crib, changing table, high chair, etc.  Over the past week, we've been blessed by friends donating things they're no longer using so that we can welcome Luke back to an equipped home.  Paul flew to another state to pick Luke up, and their plane tickets were a large unforeseen expense, so we're very grateful to those who were able to share their stuff with us for helping to minimize the financial impact of this surprise situation. 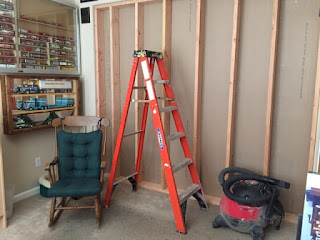 Because we shuffled rooms after Luke left, putting Katie and Hannah together in the panda room, Paul decided to give up his office for Luke.  In the next week or two, Paul will be insulating the wall and putting up sheetrock.  Having him downstairs will be a blessing, so I'm not carrying him up and down the stairs every day. 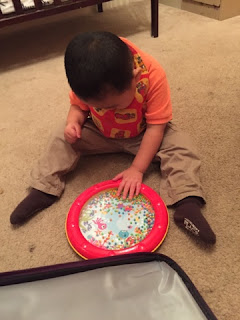 These last 3 pictures were taken tonight, after Paul and Luke got home.

Especially since... he's grown!  In just 4 months away, he's put on some weight, and seems taller to me. 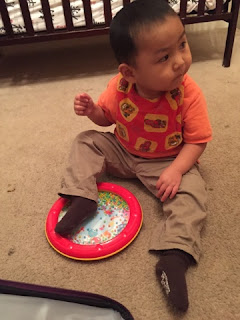 We sent this ocean drum to Lukey for his birthday gift last month.  It was one of the toys his therapists used to bring to our house, and one of few that he seemed to like.  When I pulled it out of the suitcase and held it out to him, moving the beads from side to side, he lit up and reached for it.  He taps it, pushes it, and kicks it to get it to make noise.  I was thrilled to see that he liked it. 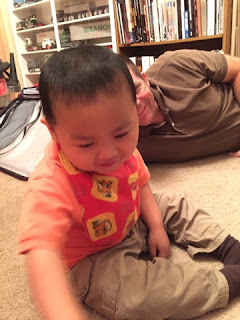 We appreciate your prayers as we all adjust, and wisdom for what happens next.