Maximizing every inch of space means packing socks inside bottles. 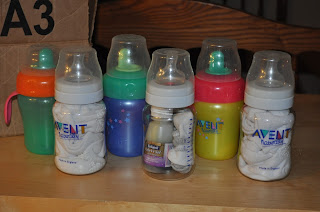 And toddler panties, and vitamins, and bibs and hair clips.
One bottle and one sippy cup for each of the babies, plus a spare of each, just in case.  (We lost Hannah's cup at Safari Park in GZ last time.) 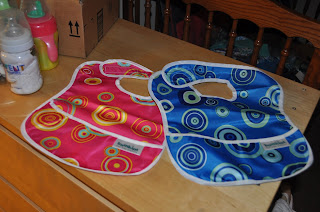 Speaking of bibs, here I go with the matchy thing again.  (The backup bib is fish.  I figured that was more gender neutral than butterflies or flowers, lol.)

I made a disturbing realization.  Once I got the babies' blankets, backpacks, supplies, and clothing in the suitcase, there was no room left for MY clothes.  Which means I'm going to have to send some of this stuff in Paul's suitcase.

I'm traveling first, and spending the first week in China alone, getting one of the babies.
Then Paul and I will meet up in the second child's province, and we will complete the remaining 2 weeks of the trip together.

The catch is that I don't know which one I'm getting first.
On the one hand, we've known about Katie the longest, and I'd like her to have one week of being the baby of the family.  On the other hand, routing wise, it makes more sense to get Luke first instead of zig zagging up and down the country, and a baby might be "easier" than an active toddler when I want to catch a shower by myself.  Maybe.

But at least some of this stuff is going to have to go in Paul's suitcase.