We got the opportunity to review the book Diary of a Real Payne, book 1 True Story, from Barbour Publishing.  This paperback book by Annie Tipton has a retail price of $5.99, and is listed simply as juvenile fiction, but Amazon suggests it for kids ages 8 and up. 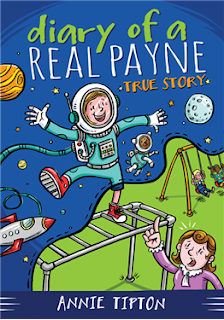 Originally, I was going to have Eli, age 12, do the review for this book, but after reading a chapter or two, he lost interest.  His issue with the book was that the main character was a girl.  (You can roll your eyes with me here.)  I think he also was more interested in some of his library books at the time.  He had this to say about it, "She has a super crazy imagination!  And she doesn't like her little brother [whom she refers to as the Space Invader] because he got to help pick out a name for the dog and he gave it some dinosaur name."

Brianna, who is 13, however, picked it up and read the whole book in one day.  She had this to say about it:  "EJ [the main character] is kind of like a cross between Ramona [by Beverly Cleary] and Sophie [of FaithGirlz].  She is very creative.  She imagines herself in a lot of different ways, like as a flight attendant, or helicopter pilot for the president, and things like that.  The book is about her adventures.  I liked it.  It's funny."

The book features excerpts from the main character's diary, and is written in an amusing and engaging style that made me chuckle when I picked the book up to flip through it.   One of Emma Jean's flighty "incidents" reminded me of something my son actually did.  When we first moved here, Josiah and Samuel were in kindergarten.  When I took them to meet their new teacher before starting school, we did the usual classroom tour, and then went out to the playground.  I was talking with the teacher, the boys were playing on the playground, and the teacher's eyes bugged out and she turned pale.  "Um honey?  You need to get down from there, okay?" she called in a trembling voice.  Samuel was walking across the top of the monkey bars.  For our family, that was totally normal.  I had to explain to Sammers that he couldn't do that at school, mostly because he'd be considered a bad influence on all the other, older kindergarteners!  In the book, EJ is daydreaming about being an astronaut and takes a walk on the monkey bars, only to "come to" and realize her new fourth grade teacher has been shrieking at her.  Unfortunately, EJ blurts out, "I thought you were an alien."  I giggled and realized that Jack would probably really enjoy this book.  We will read it aloud together as our new bedtime book.

EJ despairs of living in a small town, which I can relate to, having grown up in a town that didn't even have a McDonald's until I was in high school.  One of the unfortunate things about small towns is that there is no getting away from your enemies.  But in the book, through a series of events related to the Christmas pageant, EJ ends up "going on a mission" with her parents and her little brother that blesses the girl who always picked on her and her family, and she discovers the amazing feeling of giving to others.

Book 2 in the series, Church Camp Chaos, is coming out in March 2014.  We might need to add it to our spring reading list.  This looks to be a fun and captivating series.