If You Were Me and Lived In...

We were selected to review a great series of children's books!  If You Were Me and Lived in... books describe what life is like in other cultures.  These books by Carole P. Roman, author of the Captain No Beard books, are geared toward kids from pre-K to age 8, although my bigger kids enjoyed them, too.  These books from Away We Go Media range in price from $9.99-$11.99 and are available in paperback or Kindle versions.

This was a great review for us!  We studied several different countries last year.  I would have loved to have had these books then!  Short and interesting, they would make a great introduction to each new country we learned about. 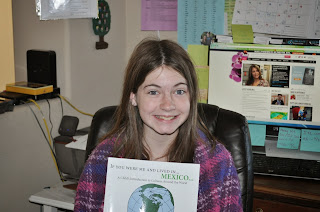 If You Were Me and Lived in... Mexico... tied in well with our current studies, as we've been learning about pyramids, and it talks about Chichen Itza, a pyramid shaped Mayan Temple.

South Korea was new to us, since we didn't study it last year, but we discussed how South Korea and China have some similarities. 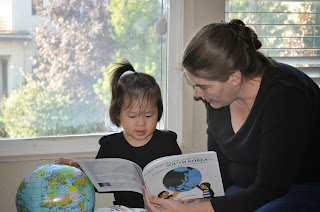 If You Were Me and Lived in... South Korea... mentions eating with metal chopsticks, which my 16 year old thought was odd, as metal is conductive, and the book had just mentioned the very hot surface used to cook Korean BBQ.  So we did some research online.  Poking around, we found a place that had 10 pairs of metal Korean chopsticks for under thirty bucks.  Brianna said, "Let's see, I could knit with one pair, stab my brothers with one pair..."  Personally, I would have mentioned eating with them, but what do I know?

France was a fun country for us last year, so we looked forward to getting to If You Were Me and Lived In... France.  (I did have to keep these in my room to space them out, otherwise the kids would have read them all on their own in a day!) 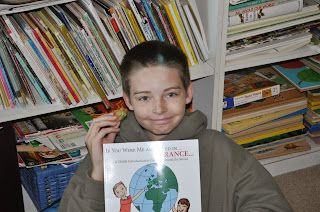 Eli's having an M&M cookie instead of tasty crepes, but we remembered making crepes last year when we studied France.  Actually, we remembered quite a lot from last year!  When I read this book, I'd pause, and Eli filled in, "Euros!" or "Eiffel Tower!"  We also made a new connection about the name Lumiere in the Disney movie Beauty and the Beast when we learned about Paris being called City of Light due to being the first city in Europe to have gas street lamps. 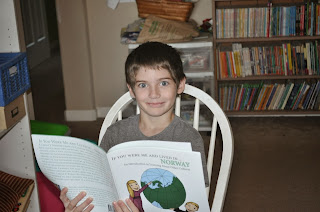 We received the blow up globe (pictured with Katie, above) with the books, and I was very pleased that Jack was able to locate all 4 countries by himself!  What a change from the beginning of last school year!  Again, I was surprised at Eli shouting out, "Aurora borealis!" when I paused on the page about the SNOW HOTEL (you can bet we had some conversations about that!) where people go to see the northern lights.

Even though Hannah was the only one of my kids in the suggested age range, all the kids liked these books.  In fact, Hannah missed a couple of them when she was at school, so I let her take those to bed to "read" on her own.

I hope to see more countries in this fun and educational series.